Accessibility links
How Long Is Too Long? Congress Revisits Mandatory Sentences : It's All Politics An unlikely alliance of Tea Party and liberal senators is working on legislation that could cut controversial federal sentencing minimums in half. 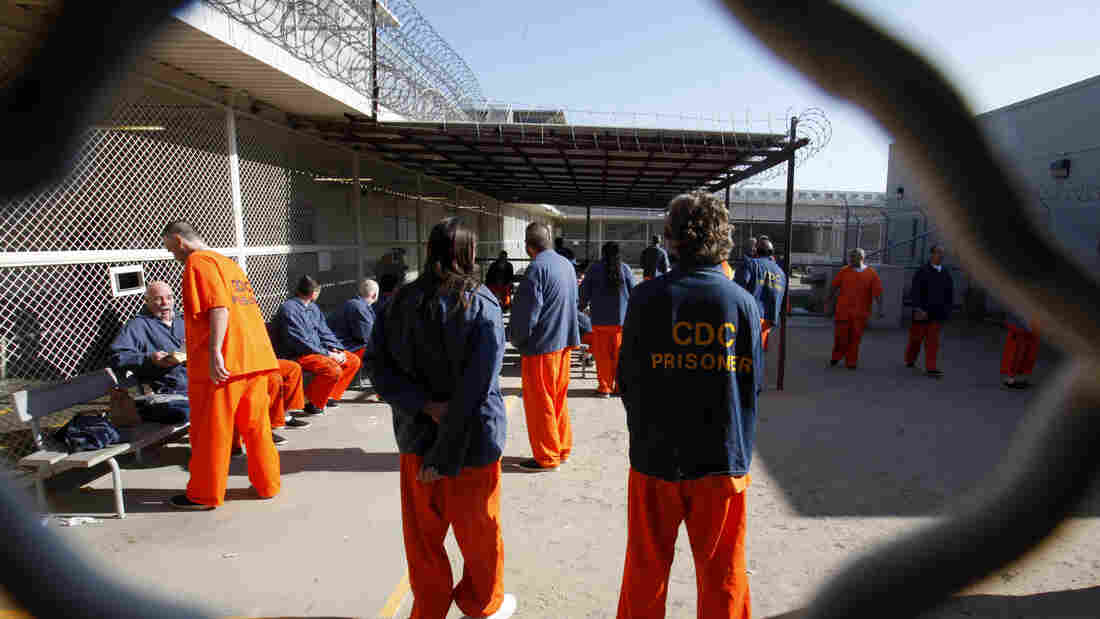 Inmates walk around a recreation yard at the Deuel Vocational Institution in Tracy, Calif., in January 2012. Rich Pedroncelli/AP hide caption 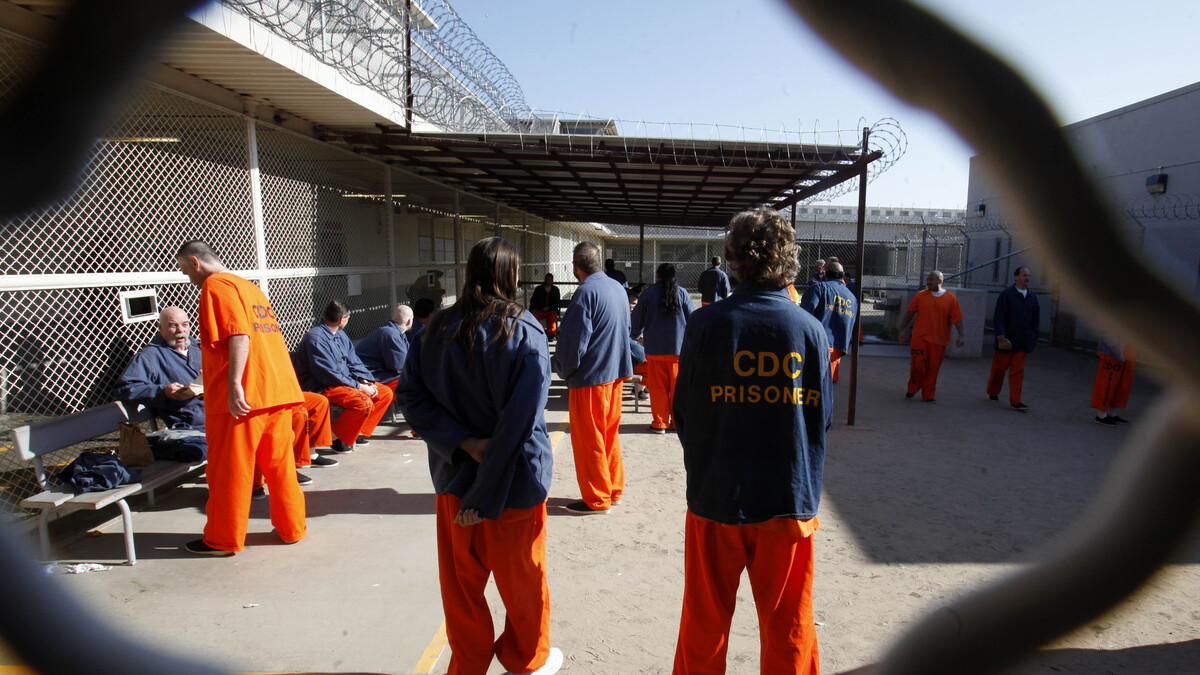 Inmates walk around a recreation yard at the Deuel Vocational Institution in Tracy, Calif., in January 2012.

Mandatory minimum prison sentences for drug dealers were once viewed as powerful levers in the nation's war against drugs, a way to target traffickers, and punish kingpins and masterminds.

But Congress, which approved the requirements in 1986 when crack-fueled crime gripped America's big cities, is now grappling with a present-day, lower-crime reality: Have the mandatory sentences put the wrong sort of offenders in prison, for too long, and at too high a cost for the nation to bear — both literally and figuratively?

Those questions are expected to be addressed in a comprehensive Senate bill being hammered out in negotiations driven by a seemingly unlikely alliance.

How unlikely? Among those driving the conversation are Tea Party Republicans like Rand Paul of Kentucky and Mike Lee of Utah, and liberal Democrats including Majority Whip Richard Durbin of Illinois and Judiciary Committee Chairman Patrick Leahy of Vermont.

Under discussion are proposals that would cut minimum sentences by half, give judges more sentencing discretion, and retroactively apply new crack cocaine sentencing standards to prisoners convicted under previous requirements.

(President Obama dipped his toe into the debate recently when he commuted the sentences of eight federal inmates convicted of crack cocaine crimes. The convicts would have received far shorter prison terms under the 2010 Fair Sentencing Act standards designed to reduce the disparity between sentencing rules for crack and powder cocaine.)

"There's a lot more momentum today than in the 20 years I've been doing this," says Julie Stewart, president and founder of Families Against Mandatory Minimums, or FAMM.

"Over-incarceration used to be a fringe issue, but it has become more of a mainstream concern," says Stewart, who started FAMM after her brother received a prison sentence for growing pot plants.

But while advocates such as Stewart, libertarian thinkers at the CATO Institute and a growing number of conservatives like columnist George Will are pushing for change, some drug prosecutors have urged caution.

"The real power and efficacy of federal minimum mandatory sentences is our ability to hold them over certain peoples' heads in solving kingpin drug cases, or major murders," says Scott Burns, head of the National District Attorneys Association.

Burns was among the witnesses who testified about mandatory minimums last fall before the Senate Judiciary Committee. The sentencing rules have been "an important tool" in driving down serious crime, Burns says, which over the past three decades has plummeted.

"They're doing this because they are simply refusing to fund more federal prisons, period," says Burns, a former deputy director of National Drug Control Policy during the George W. Bush administration.

There have also, however, been assertions that federal prosecutors have used harsh sentences as a cudgel to elicit guilty pleas.

"We must ensure that our most severe mandatory minimum penalties are reserved for serious, high-level or violent drug traffickers," he wrote in an August memo, which he followed with a set of guidelines for federal prosecutors.

A Panoply Of Proposals

A bill sponsored by Durbin and Lee would cut by half the 5-, 10-, and 20-year minimums now required for first and second drug-sale offenses.

Separate legislation offered by Paul and Leahy would give judges the ability to impose sentences short of the minimum guidelines. Additionally, Sens. Sheldon Whitehouse, D-R.I., and Rob Portman, R-Ohio, have proposed allowing inmates to shorten their sentences by participating in re-entry programs.

And Senate Minority Whip John Cornyn, a Texas Republican, has introduced his own bill that, among its provisions, would allow low-risk prisoners to serve up to half of their remaining sentences in home confinement or a halfway house.

Also under discussion is the federal version of the state-based "three strikes" law, which, since 1994, has required "enhanced sentencing" for defendants with two or more previous felony convictions in state or federal courts. Life in prison has been mandatory if the defendant is convicted of a serious violent felony and has at least one prior serious felony conviction, which can be a drug conviction.

Leahy, at a Judiciary Committee meeting Thursday, said he was encouraged by progress made to "reach a bipartisan and comprehensive compromise on sentencing reform that includes important yet incremental changes to mandatory minimum sentencing legislation."

The Financial, And Constitutional, Angle

The financial element of the mandatory sentencing debate is an important consideration.

Cornyn has touted his reform proposal as an effort to "increase public safety and reduce prison costs." In introducing his legislation, Whitehouse noted that 30 percent of the Justice Department's budget is now dedicated to federal prisons; the cost, he said, has doubled since 2000.

"As a result," he said, "funding for other important federal law enforcement priorities — from stopping cyberthreats to providing services for victims of crime — has suffered."

But legal scholars like Erik Luna, a Washington and Lee University law professor who has written and testified extensively about mandatory minimum sentencing, also assert that the sentencing rules shift power from judges to prosecutors — an infringement on separation of powers doctrine.

It's an argument George Will recently invoked: "The policy of mandatory minimum sentences for drug offenses has empowered the government to effectively nullify the Constitutional right to a trial."

Stewart, of FAMM, says she gives Rand Paul "a ton of credit for getting this conversation going. He cares deeply about it."

"The question we have to ask is why is prison always the answer?" she says. "We have to unlearn the bad habit we've developed of incarceration first."

Burns, the prosecutor, says he and members of the National District Attorneys Association are willing to talk about improving the sentencing system, but they want more specifics from Capitol Hill.

"We can always do better," he says, "but if you start letting people out who got there for a reason, most of them multiple offenders who have been convicted or have pled guilty, that would be a problem.

"Why arrest and convict, knowing he's going to be back on the street?"

But when a reluctant judge is forced by minimum sentencing rules to impose a 55-year sentence on a 24-year-old man after his third small-time marijuana sale conviction, Stewart says, pointing to the much-publicized case of Weldon Angelos, doing better isn't just an option. It's mandatory.