Accessibility links
Tom Coburn, GOP Budget Hawk And Obama Friend, To Leave Senate : It's All Politics The Oklahoma senator, a leading conservative, will retire two years early. He's battling cancer but says his decision is based on serving his family by "shifting my focus elsewhere." 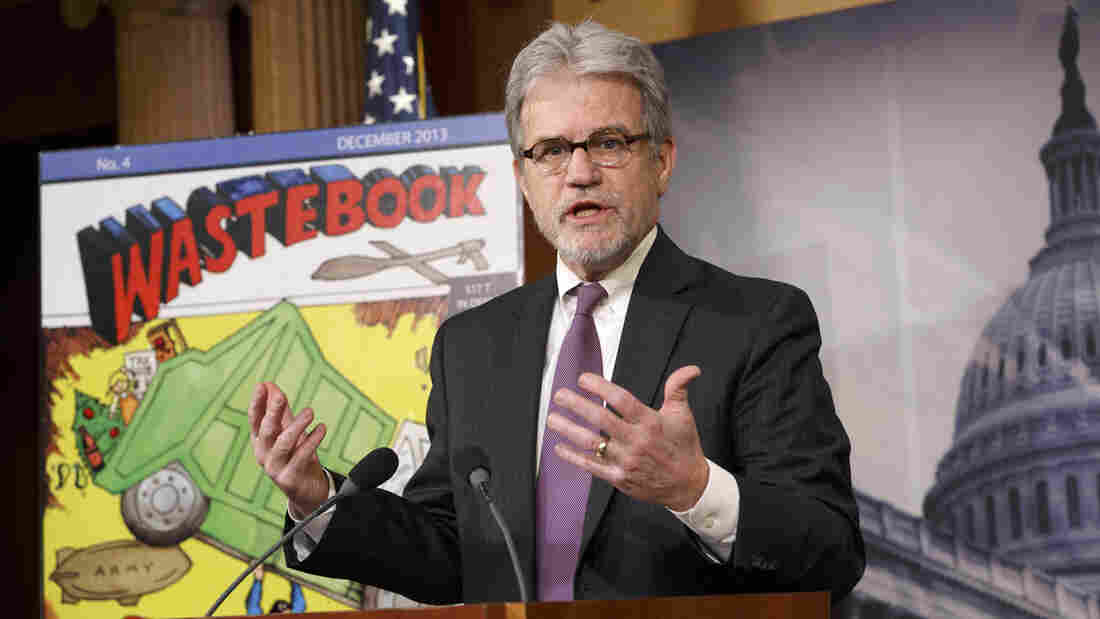 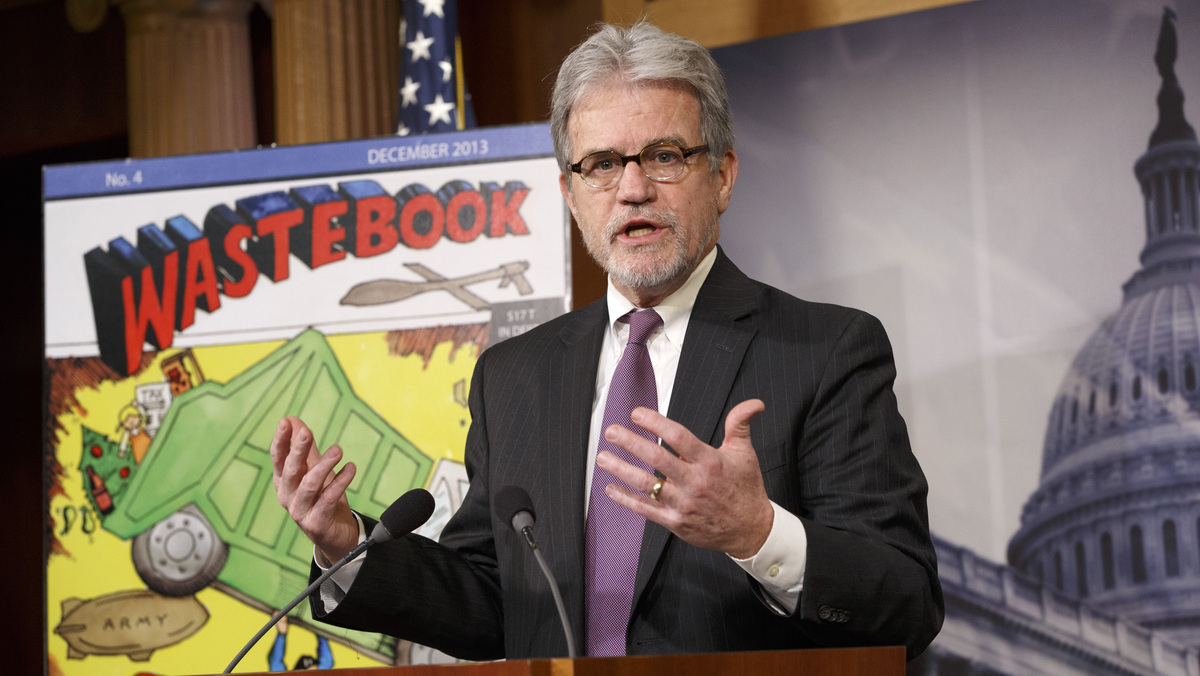 Sen. Tom Coburn, R-Okla., outlines his annual "Wastebook," which points a critical finger at billions of dollars in questionable government spending, on Dec. 17 on Capitol Hill.

Tom Coburn will leave the Senate with a reputation as "Dr. No," but not necessarily as doctrinaire.

The Oklahoma Republican, who at age 65 is undergoing his fifth bout of cancer, announced that he will resign in December, two years before his second term expires.

"This decision isn't about my health, my prognosis or even my hopes and desires," Coburn, a physician, said in a statement. "As a citizen, I am now convinced that I can best serve my own children and grandchildren by shifting my focus elsewhere."

The departure of Coburn, a leading conservative who previously served three terms in the U.S. House, will divest Congress of one of its most ardent budget and debt hawks.

His zeal is reflected his annual, much pored over "Wastebook." It details examples of what he views as flagrant government spending excesses. Last year's compilation of 100 included $65 million for post-Hurricane Sandy tourism advertising, as well as $10,000 for a National Endowment for the Arts grant to produce a live "pole dancing" performance that featured power linemen, their bucket trucks and 20 utility poles.

"Tom Coburn was fighting runaway spending long before it was cool," wrote Jim Geraghty, columnist for the conservative National Review, under a Friday headline that read, "Depressing news this morning."

Kurt Hochenauer, an Oklahoma Democrat and author of the political blog Okie Funk, says that while Coburn's actions often felt like political theater, his war on wasteful spending resonated across the political spectrum.

"I disagree with Tom Coburn on many issues, but I have found common ground with him at times, especially his interest in wasteful government spending," says Hochenauer. "Sometimes his actions as so-called Dr. No have seemed like political stunts to me, but I admire his consistency and focus."

"I also admire that he stands up for his principles and views," Hochenauer says, "even when it means going against more extreme members of his political party."

Coburn's decision to step down early also returns to the sidelines a strict social conservative, but one who would occasionally buck his own party — and who unfailingly avoided vilifying his political opponents.

It was President Obama, in fact, who wrote about Coburn last year for Time when the senator was named to the magazine's annual list of its picks for the 100 most influential people in the world.

Obama and Coburn famously befriended each other at an orientation dinner in 2005 when they were both new senators. Their wives bonded, and so did they, the president wrote, "over family and faith."

The men collaborated, Obama said, on government transparency legislation, trimming earmarks, and efforts to "close tax loopholes that benefit only the well-off and well connected."

"After I took office, Tom received dozens of letters from Oklahomans complaining that we looked too close on TV," Obama wrote. "Tom's response was, 'How better to influence somebody than to love them?' "

Coburn loves his party, too, but he was willing to give it hell.

Here's what he said on MSNBC's Morning Joe program: "To create the impression that we can actually defund Obamacare, when the only thing we control, and barely, is the House of Representatives, is not intellectually honest."

Back in the spring of 2008, during the height of the chaotic battle for the GOP nomination for president, he accused Republicans of being in a state of "paralysis and denial." He lambasted fellow party members for hiding a "big-government liberal agenda" (read: spending) inside a GOP package.

Here's more of what he wrote in the Wall Street Journal:

"Regaining our brand is not about messaging. It's about action. It's about courage. It's about priorities. Most of all, it's about being willing to give up our political careers so our grandkids don't have to grow up in a debtor's prison, or a world in which other nations can tell a weakened and bankrupt America where we can and can't defend liberty, pursue terrorists, or show compassion."

After Obama won a second term in 2012, Coburn, who decided to become a doctor at age 30 after his first bout with cancer, urged Republicans to "never give up."

"Many want to blame our setbacks in the Senate, in particular, on the Tea Party," he said. "I agree we need to do a much, much better job of candidate recruitment. The problem in Republican politics isn't the challengers: It's the incumbents — career politicians who say they are for limited government and lower taxes but make decisions that give us bigger government and higher taxes."

His disillusionment was palpable, including with Obama for having "conformed to, rather than challenged, the political culture that as presidential candidate he vowed to reform."

Coburn, who opposed the president's health care legislation, criticized the disastrous rollout of the law — though in a Senate floor speech in December, he said its health insurance exchanges will ultimately "work, and work well."

But his real ire was reserved for Senate Majority Leader Harry Reid, the Nevada Democrat who deemed that a simple majority of senators could override filibusters on presidential nominees, except those to the Supreme Court.

Reid's "narrative about Republican obstruction of appointees is a diversion for his own war against minority rights," said Coburn, who last year offered more amendments than any other senator.

Coburn's seat is expected to remain in Republicans hands when a successor is picked in November, and his party is within sight of winning Senate control.

But Coburn, in an interview with The Oklahoman newspaper, said he's ready to move on.

"I've had a lot of changes in my life," he told the newspaper. "This is another one."