Accessibility links
Obama Showed A Deft Hand With Speech. Why Not With Congress? : It's All Politics ANALYSIS: The president was brisk and confident during Tuesday night's State of the Union address. He also managed to avoid a remarkable array of issues that could have proved problematic. But he hasn't been nearly as adept at the less-dramatic business of dealing with Congress and the media.

Obama Showed A Deft Hand With Speech. Why Not With Congress?

Obama Showed A Deft Hand With Speech. Why Not With Congress? 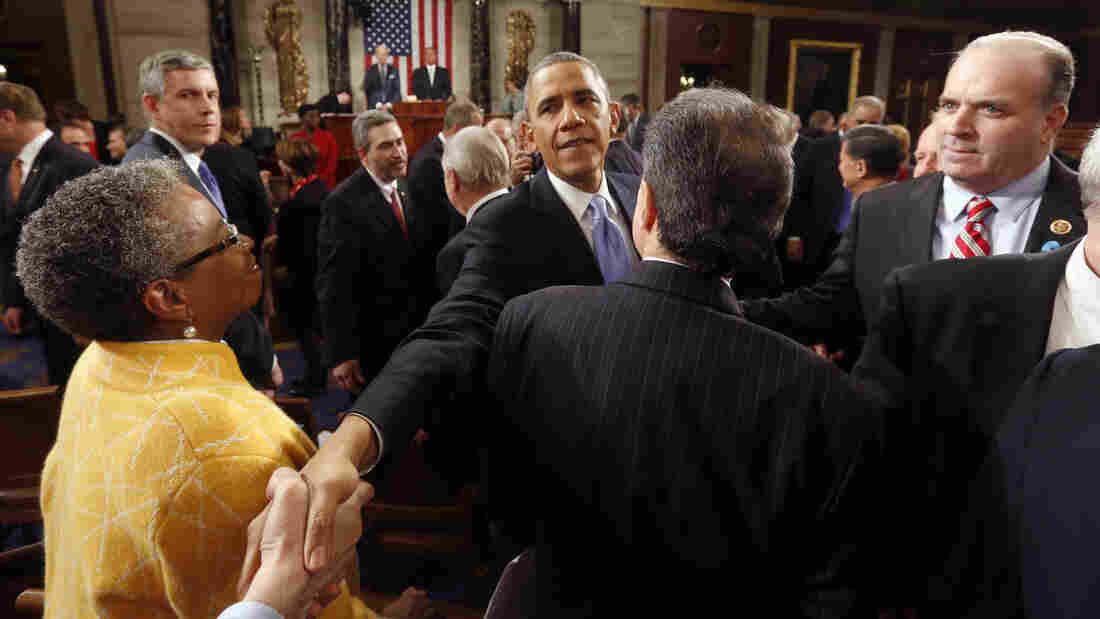 President Obama shakes hands after giving the State of the Union address before a joint session of Congress on Tuesday. Larry Downing/AP hide caption

The toughest test of a card player comes not with a big hand or a sheer bust, but rather with cards somewhere in between. Then it's not the deal that makes the difference — it's the sheer skill of the player.

The hand President Obama was playing in his latest State of the Union speech could scarcely be called a powerhouse. Pre-speech coverage was dominated by polls showing his approval rating well underwater and the national mood dyspeptic at best. Even the improving macroeconomic picture seemed to have cheered few at the personal level, and the "right-direction-wrong-track" poll question was decidedly downbeat.

Reviews of the president's fifth year in office dwelt on a parade of bad stories, from the failure of gun control measures in the Senate to the stalling of immigration changes in the House to the revelations of government surveillance and data-gathering — all of it topped off with the meltdown of Obamacare in its first months of full implementation. On the foreign front, a possible breakthrough with Iran was overshadowed by civil war in Syria, the quagmire in Afghanistan and renewed unrest in Iraq, Egypt and South Sudan.

Yet the embattled president was not without cards to play on this night. Congress has an even deeper trough in its public approval than the White House. The Republicans bore the brunt of opprobrium for the federal government's partial shutdown in October, and had briefly seemed in free fall themselves.

Inside The State Of The Union: What The President Proposed

5 Things We Learned From The President's Speech

Polls also showed the public strongly supportive of a higher minimum wage, extended benefits for the long-term unemployed and new rules on immigration — precisely the policy fronts on which the president planned to press forward against strong Republican resistance.

In other words, neither party came to this year's State of the Union table in a dominant position, though there surely were partisans on either side who thought they did. In the media, many stressed the long fall the president had taken since his emergence as an almost magical persona in the presidential primaries six years ago. Now the cable TV stories asked: "Is Obama already a lame duck?" Yet most were quick to add that the GOP was hobbled by miscues and was so riven with factional debate that the official party response to the State of the Union (by Rep. Cathy McMorris Rodgers) was followed by two separate Tea Party retorts (by Sens. Mike Lee and Rand Paul).

Given this downbeat context, and noting the chief executive's rather lackluster public performances in recent months, expectations for this State of the Union were not nearly so high as they were last year. Then, the president was fresh off his re-election, replete with vindication and seeking fresh worlds to conquer. That contrast may have helped the president, who seemed to draw a kind of inspiration Tuesday night from the uninspiring circumstances of the moment.

For purposes of his one-hour address to the nation, the president once again proved himself a gamer. He was brisk and confident, the master of a text we are told was in preparation since November. Having telegraphed for days his intended emphasis on "income inequality," the president tacked slightly by talking instead of "inequality of opportunity." That caught Rodgers slightly off-guard. Her text was already written to say that opportunity was the important thing, not income. It's a subtle point, perhaps, but one that afforded the president a slight edge (and demonstrated again why it is better to be the king than the king's critic).

Obama also managed to avoid a remarkable, even breathtaking array of issues one might have thought he had to deal with. He declared Obamacare to be more successful than most people think, and really, how high a bar is that? He also slid past the National Security Agency scandal that has cost him dearly on the left, and he made no mention of the deportations that have so angered immigrants' rights groups.

Yes, he touched the various constituency buttons on issues such as climate change and environmental damage. And yes, he once again gave primacy to revamping the immigration laws. But here, as elsewhere in the speech, he showed deference to House Speaker John Boehner. Obama seemed to suggest he was still willing to deal with the Republican from Ohio, especially if Boehner is able to keep his often-unruly troops in line. The president implicitly saluted Boehner for doing so on the federal budget compromise vote in December.

In sum, the Obama who delivered the speech was a nimble and adaptable player. It is the tragedy of this presidency that, to date, he has not been nearly as adept at the less-dramatic business of actually dealing with the Congress, the federal bureaucracy, the media or any of other power centers — including foreign governments.

The president has, in recent weeks, added new staff in critical positions, including senior adviser John Podesta, who is a veteran of Bill Clinton's later years in the White House, and new faces in the legislative affairs office. There is some cause for hope that these new players will help the president extend his talent for presentation to produce more successes in policymaking.