Accessibility links
GOP Struggles To Sell Message In Big Cities : It's All Politics Democrats currently control city hall in 90 percent of the nation's largest cities. But not too many years ago, Republicans had a pretty good chance of winning big-city mayoral races. 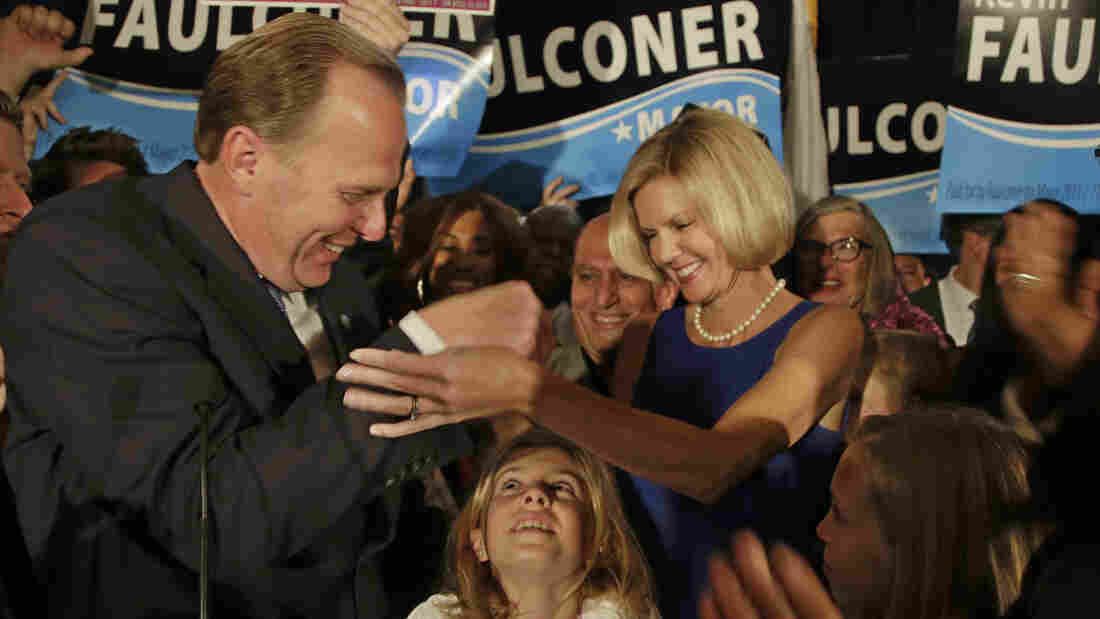 Kevin Faulconer reaches for his wife, Katherine, at a Feb. 11 rally as their daughter looks up from below. Faulconer, a Republican, won the San Diego mayoral race last week. Lenny Ignelzi/AP hide caption 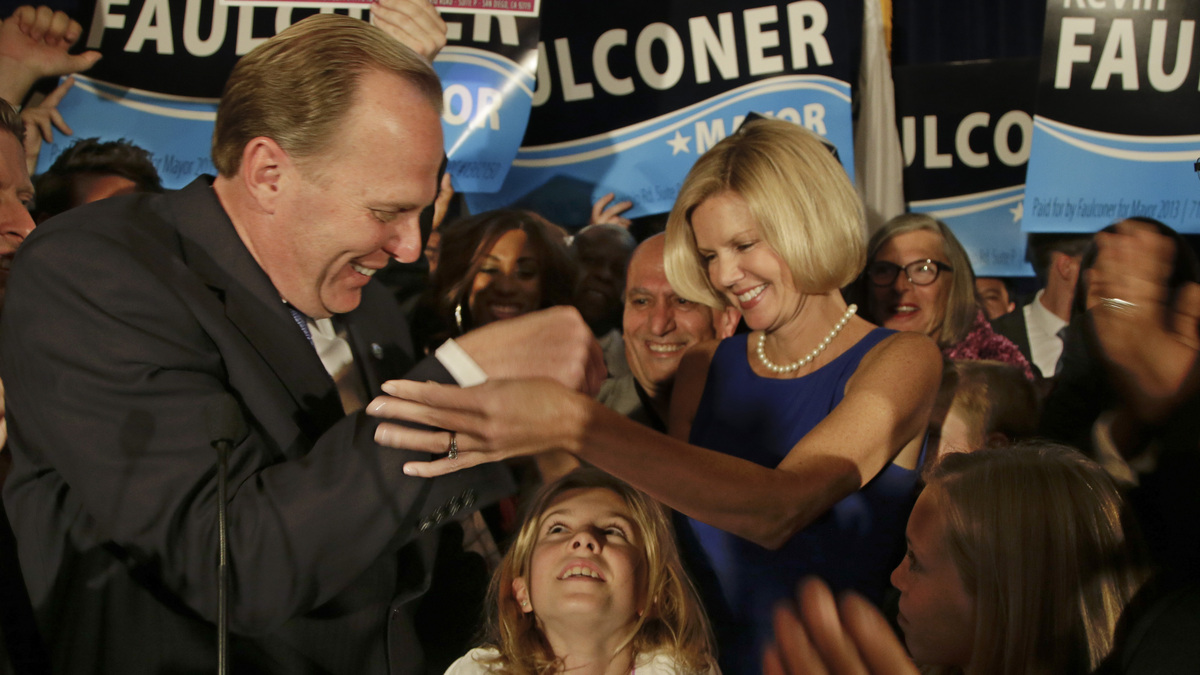 Kevin Faulconer reaches for his wife, Katherine, at a Feb. 11 rally as their daughter looks up from below. Faulconer, a Republican, won the San Diego mayoral race last week.

San Diego voters did something highly unusual last Tuesday: They elected a Republican as mayor.

San Diego will now be the largest city in the country with a Republican mayor, Kevin Faulconer, who has been serving on its city council. The next largest is Indianapolis.

In fact, of the nation's 100 largest cities, a grand total of nine now have GOP mayors, plus two other Republicans who are nominally independent.

Until just recently, Republicans had a pretty good chance of winning big city mayoral races. Back in the 1990s, Republicans served as mayors in half the nation's 12 biggest cities, including New York and Los Angeles.

Throughout long periods of the decades between the Civil War and the Great Depression, major cities such as Philadelphia were dominated by Republican machines, while GOP presidential candidates could hope to carry cities including Los Angeles, Atlanta, Chicago and Detroit.

That would be almost unthinkable today. Although neither party has much of an urban agenda at the national level, the nation's urban cores — and many of its densest suburbs — are how home to people who are highly Democratic in their voting habits.

"You have larger minority populations that tend to vote for Democrats, larger population of Millenials who tend to vote Democratic if they bother to vote, and progressives who are drawn to cities," says Mark Jones, a political scientist at Rice University.

In San Diego, Faulconer took advantage of circumstances. A special election was triggered by the disgrace of Democrat Bob Filner, who resigned last August amidst accusations of serial sexual harassment.

That created an opening, but San Diego has long been riper territory for Republicans than most big cities today. Prior to Filner's win in 2012, the city hadn't elected a Democrat as mayor since 1989.

Some of that has to do with topography. In many metropolitan areas, more conservative white voters have fled for suburban and exurban communities over the past half-century. But San Diego proper has expanded to absorb Republican-leaning suburbs such as Rancho Bernardo within the city limits.

Given San Diego's position by the sea, surrounded by canyons and hills, there's not a lot of area where conservatives can move and still have a reasonable commute. San Diego itself — although it now votes Democratic in presidential contests — has a relatively conservative bent due to the strong military presence and its low-tax traditions.

In Indianapolis, the fact that Republican Greg Ballard is mayor is a bit of an accident. He was considered a placeholder candidate with little chance to win against Democratic incumbent Bart Peterson back in 2007, but Peterson's personal unpopularity allowed Ballard to surge at the end.

"The Democrats are going to be hard-pressed to beat him, if he wants to run for a third term next year," says Ed Feigenbaum, editor of the newsletter Indiana Legislative Insight.

Once Ballard steps down, however, Democrats should regain the post. The merger of the city with Marion County decades ago gave Republicans an advantage for a time, since, as in San Diego, this captured more conservative voters.

But it's the outer suburbs that are growing now and the bulk of the city has become a Democratic stronghold.

"We have seen a migration of the most conservative white people farther away from the city," says Ruy Texeira, a Democratic political demographer at the Center for American Progress. "This pattern is very, very consistent across metro areas of the United States."

Central cities, meanwhile, are attracting people who are likely to vote Democratic.

"There's a self-selection for people that choose to reside at higher density," says Robert Lang, an urban affairs professor at the University of Nevada, Las Vegas. "They tend to be younger, more single and have higher college education rates."

It's not just that certain types of people are attracted to denser areas. Once there, they have a greater demand for infrastructure, including public transportation. That makes them more responsive to pro-government positions — and the party that embraces them.

"The more densely packed you are, government has a more obvious role to play," Teixeira says.

Cities have become comfortable for various parts of the Obama coalition, including minorities and "waves of young people," says William Frey, a demographer at the centrist Brookings Institution.

"People who can afford to live in the cities, people with advanced degrees, those are people who tend to vote Democratic, when you look at the polls," he says.

Lugar's priorities were in line with Nixon's domestic policy approach, committed to improving housing and education, while combating poverty.

"It was almost like a demonstration project for President Nixon and his policies in a Midwestern urban environment," Feigenbaum says.

But, just as Lugar came to be seen as too moderate as a senator — he was ousted in a 2012 primary by a Tea Party favorite — his approach to municipal governance is no longer much in fashion within his party.

It's an approach that could help the GOP rebuild its bench in the cities, suggests Rick Baker, who served much of the past decade as the Republican mayor of St. Petersburg, Fla.

The issues that play well in cities are different than the ones that matter in legislatures or Congress, he says.

Giving Up On The Urban Vote

Contemporary Republicans have pretty much given up competing for urban votes. It's easy to understand why.

Back in 1980, Ronald Reagan lost New York City, but took more than 40 percent of its vote. By 2012, President Obama beat Mitt Romney there, 81 percent to 18 percent, shutting the Republican out entirely in numerous precincts.

In general, the denser the area, the worse Romney did. His running mate, Wisconsin Rep. Paul Ryan, was interested in stumping in big cities with a conservative message for combating poverty. The campaign thought it was a waste of his time.

Republicans unquestionably start at a disadvantage in nearly every sizable city, but failing to compete in the nation's most populous places necessarily means surrendering an awful lot of votes.