Accessibility links
Once-Obscure State Job Is Now Attracting Millions Of Campaign Dollars : It's All Politics No fewer than three new superPACs are working to elect their preferred candidates for secretary of state positions, even though officials overseeing elections are supposed to be neutral. 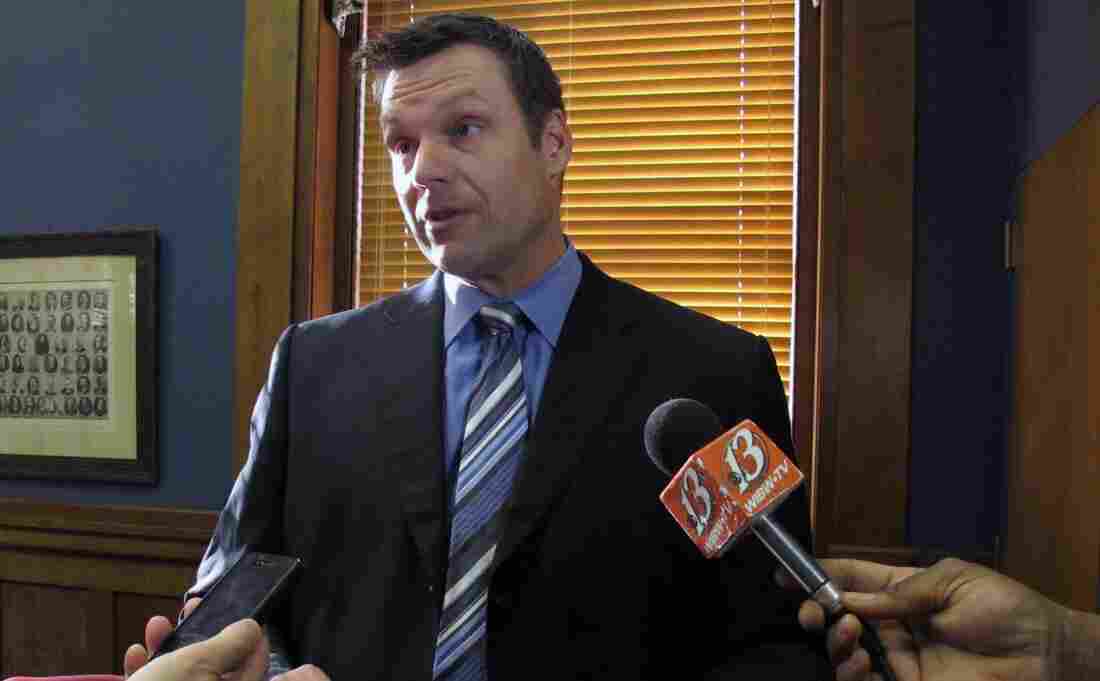 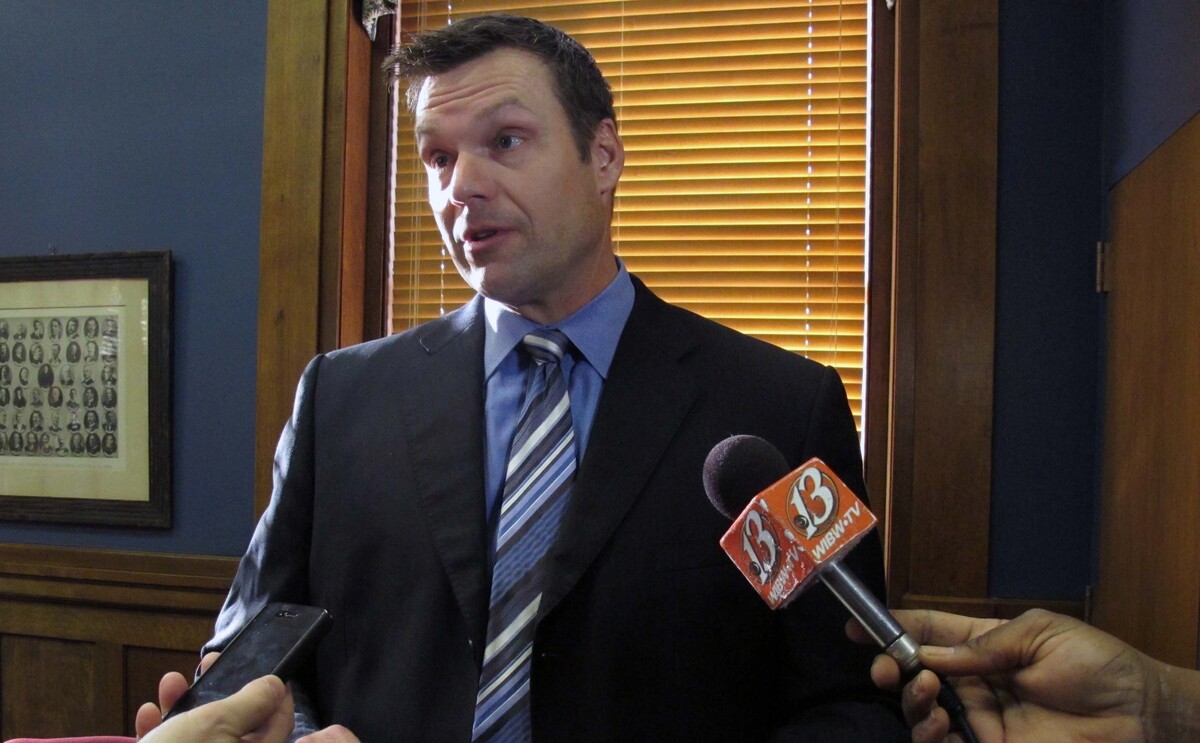 Iowa was one of the few states that saw voter turnout increase in 2012. Brad Anderson is proud of the role he played in encouraging turnout there as state director of President Obama's campaign.

Now he's running for secretary of state, which would put him in charge of overseeing elections.

"I have a plan to make Iowa No. 1 in voter turnout," Anderson says.

The fact that a former Obama operative wants to run elections makes some people nervous. But he's part of a trend of overtly partisan figures running for a job designed to be neutral when it comes to election administration.

No fewer than three superPACs have been formed in recent weeks — two on the left, one on the right — with plans to spend millions of dollars this year influencing elections for what used to be a low-profile post in most states.

The reason is obvious, says Rick Hasen, who teaches law and political science at the University of California, Irvine, and writes the influential Election Law Blog.

"Since 2000, it's been clear to political operatives that in very close elections the rules and the implementation of the rules for running elections can make a difference," says Hasen. "It's not surprising we see competition over the office that has the most control over those rules and, especially in battleground states, this trend is likely to continue."

Secretaries of state increasingly have found themselves at the center of political attention ever since the lengthy — and highly contentious — presidential recount in Florida in 2000.

Just about every election cycle since has seen complaints from one party or the other that some secretary of state has attempted to tip the scales to favor his or her party, whether it was questions about presidential voting in Ohio in 2004 and 2008, or the eight-month-long recount following the razor-close Minnesota Senate election of 2008.

There are all kinds of arcane rules, such as the paper stock that counties use to report results, or whether particular boxes must be checked to determine voter intent, that can be interpreted in ways that might favor one party or the other.

"In many states, it's already become a politicized office," says Art Sanders, a political scientist at Drake University in Iowa. "The fact that it's already politicized is why superPACs have become more committed to electing the, quote, unquote, right person."

As early as 2006, Democrats funded an independent political group known as the Secretary of State Project in an attempt to elect more of their party's candidates to the office. But Republicans currently hold 28 of the positions nationwide.

"We can see Democratic groups coming out now to get more Democratic secretaries of state elected as somewhat of a response to the success of the Republicans and conservatives in these offices," says Hasen.

Elections aren't run by partisan officials in all states. In Wisconsin, for instance, they're overseen by a board made up of retired judges.

And even where the top election officials are partisan figures themselves, most observers say they typically attempt to run elections in a fair-minded way — despite the inherent tension involved when partisan officials serve as election referees.

"Most secretaries of state do their best to be fair and impartial," says Wendy Weiser of the Brennan Center for Justice, which studies voting issues.

A recent report on election management from a bipartisan panel appointed by Obama could serve as a helpful road map, she says.

"The secretaries range on the political spectrum and have policy differences, but I would vouch for every secretary of state to be able to have fair election results," says Kansas Secretary of State Kris Kobach, who previously served as the state GOP chairman.

But Kobach — and several of his Republican colleagues — have become lightning rods for controversy after pushing voter identification requirements that Democrats say are meant to disenfranchise the poor, the young and minorities, which are generally Democratic constituencies. Republicans say they're simply trying to make sure every ballot that's cast is legitimate.

Whether partisan in intent or not, however, their approach runs counter to the more expansive approach favored by Democrats. Someone like Anderson, the Iowa candidate, says it's only "common sense" to pursue policies that will expand access to the ballot, such as allowing online voter registration.

The result is that Republicans and Democrats now handle this nominally neutral job in totally opposite ways — even when secretaries of state aren't pushing policies with the open intent of helping candidates from their own parties.

"Under the very thin disguise of these issues, the two parties have decided that there shouldn't be an honest broker in charge of elections and it ought to be a partisan level that the winning party uses to benefit its own agenda," says Dan Schnur, who is running as an independent for secretary of state in California.

"If you're elected with the help of a partisan superPAC, then those suspicions are going to run even deeper, and more likely than not be accurate," Schnur says.

Schnur, a political science professor at the University of Southern California who has served as a spokesman in the past for prominent Republicans, says it's "an atrocity" that party loyalists are attempting to turn election administration into "a partisan tool."

"You wouldn't want the umpire wearing a Dodgers or a Yankees jersey," he says. "The superPACs are essentially working to hijack the democratic process for the advantage of their own party and their own party's candidates."

Such concerns are overblown, says Trey Grayson, a former Republican secretary of state in Kentucky. Elections are better managed than they were prior to 2000, he says, thanks not only to the passage of new laws but to increased attention from media outlets and the public.

Most election management decisions are made at the county level, he notes.

"Voters have a great deal of control and can turn out any elected secretary of state who becomes too partisan, just as they can with a governor, attorney general, auditor or any other elected official who is elected on a partisan ticket," says Grayson, who now directs the Harvard Institute of Politics.

Takes One To Know One

That assumes voters are paying attention. Secretaries of state fly under most people's radar, which is in part why the new superPACs believe they can have outsized influence through relatively small investments.

Even if most citizens don't know the names of their secretaries of state, other elected officials do. The fact that the position has become more overtly partisan in many places will make it harder for secretaries of state to push through any sort of election law changes.

Even the most technical, anodyne fix could be seen by legislators as a Trojan horse meant to favor one party, warns Cathy Cox, who served as the Democratic secretary of state in Georgia from 1999 to 2007.

"I sound like a dinosaur when I say this, but I feel like I served in an era when you could get Democrats and Republicans to work together," she says.

But times have changed and the political atmosphere has become "poisoned," says Sanders, the Drake professor.

"Attempts to solve problems we all agree should be solved are seen as political calculations," he says. "The politicization of secretary of state is a very good symbol of how low our politics have sunk."