Accessibility links
How A Remote Alaska Road Became A Political Wedge Issue : It's All Politics Judging from an opponent's attack, you could easily conclude that Sen. Mark Begich opposes a lifeline to the small Aleutian village of King Cove. But the opposite is true. 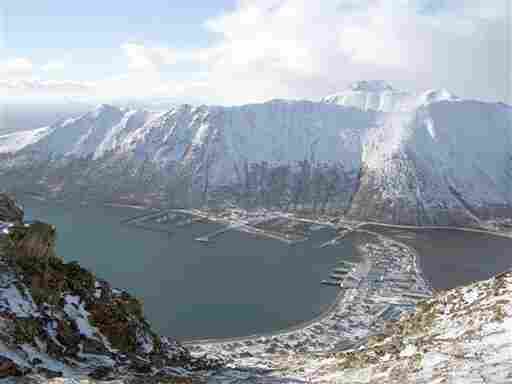 The Alaska village of King Cove wants an all-weather road to the outside world. Election-year politics is complicating that wish. AP hide caption

Judging from an attack by one of his Republican opponents, you could easily draw the conclusion that Democratic Sen. Mark Begich of Alaska opposes a road that would serve as a lifeline to the remote Aleutian village of King Cove. But you would be wrong.

Begich, who is counted among the Senate's most vulnerable Democrats, actually supports a road that would run through the Izembek National Wildlife Reserve. After Interior Secretary Sally Jewell rejected a state-sponsored land swap meant to make the road more acceptable to environmentalists, Begich this year introduced legislation to mandate the land exchange and get a road built.

His bill was the latest step in a long Alaskan quest for the road, which has put King Cove residents and many other Alaskans at odds with environmentalists.

But there's no room for subtlety in competitive Senate races. Despite the legislation, Dan Sullivan, one of three Republicans vying to take on Begich, nevertheless faulted the senator after a recent King Cove medical incident. Like an episode from The Weather Channel's Coast Guard Alaska, an emergency crew recently had to fly a helicopter through nerve-jarring weather to medevac a seriously ill woman from the remote village.

The Sullivan campaign had a suggestion for how Begich could truly demonstrate that he stands with the residents of King Cove: vote against the confirmation of Rhea Sun Suh, President Obama's nominee for Interior Department assistant secretary for fish, wildlife and parks.

Suh is opposed by Senate Republicans who accuse her of opposing natural gas development in Western states and hold her role in the 2010 offshore drilling moratorium against her.

"If Senator Begich really supports the King Cove road he should vote against Suh to send a message to the Obama administration that he isn't the get along, go along Washington politician that his 97% voting record with Obama would portray him to be," Mike Anderson, Sullivan's communications director, wrote in an email. "A vote against Suh would certainly send a message that life is more precious than maintaining his 97% voting record with Obama."

Begich hasn't said publicly how he plans to vote on the nomination. And it's unclear whether he will have to decide before the midterm elections. While an aide to Sen. Mary Landrieu, chairwoman of the Senate Energy and Natural Resources Committee, said a confirmation vote by the panel would be scheduled before the midterm elections, Begich isn't on that committee. So what would matter would be his vote once the nomination was put to the entire Senate for a vote. And Senate Majority Leader Harry Reid could slow walk such a vote until after the election.

Either way, this recent attack on Begich illustrates the challenges facing red state Democrats like him. Republicans will take every opportunity to staple them to the administration — even on issues where, for all intents and purposes, those Democrats disagree with the administration.