Accessibility links
How To Pick A Candidate In Texas: Eeny, Meeny, Miney, Moe : It's All Politics Faced with a long ballot on Tuesday, Texas Democrats chose a complete unknown with an agreeable name as their favorite in a down-ballot statewide race.

How To Pick A Candidate In Texas: Eeny, Meeny, Miney, Moe

How To Pick A Candidate In Texas: Eeny, Meeny, Miney, Moe 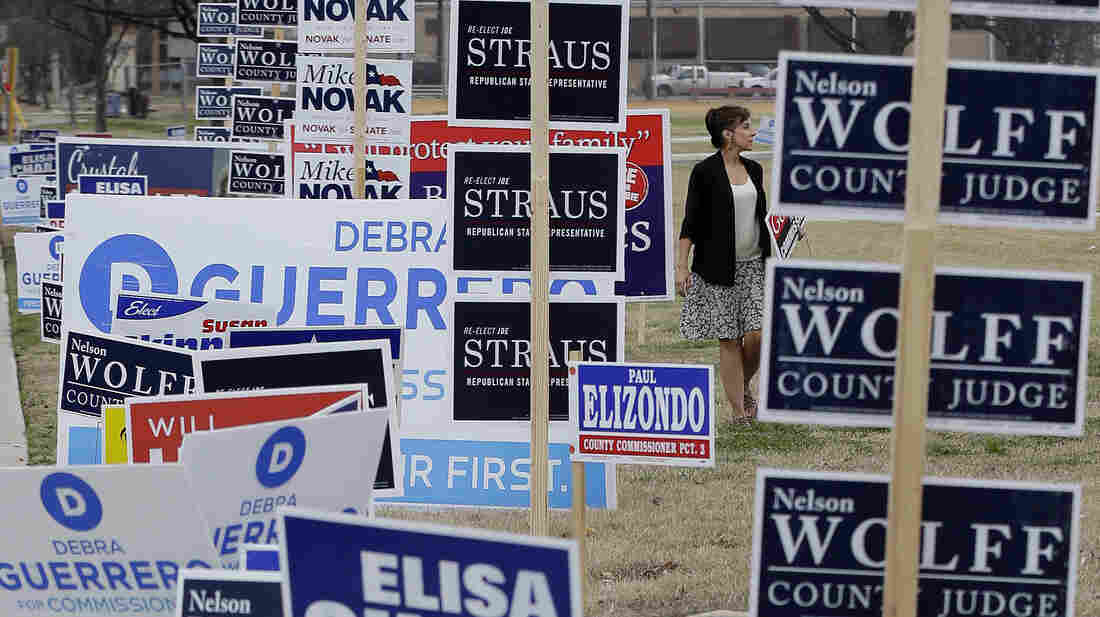 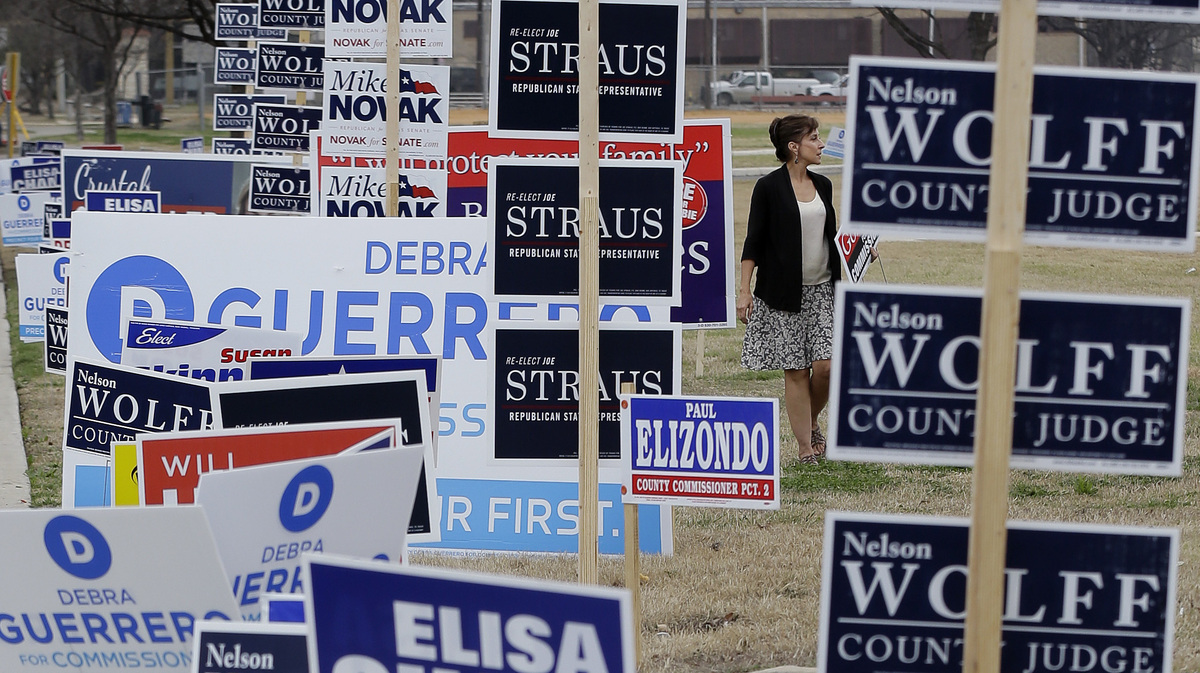 Rebecca Gonzalez searches for a location for an election sign at an early voting polling site Feb. 18 in San Antonio, Texas.

Jim Hogan thanks God for his victory in a statewide Texas primary election on Tuesday. His campaign clearly had little to do with it.

Hogan paid his filing fee and then did essentially nothing else.

"Not being a politician, I didn't want to spend money," he says. "I didn't buy any mailers or yard signs. I think it's a waste to spend a lot of money on these politics."

Nevertheless, Hogan, a cattle farmer from Cleburne, came out on top in the Democratic primary for agriculture commissioner. With 39 percent of the vote, he finished ahead of Kinky Friedman, the country singer turned perennial candidate, and bison rancher Hugh Fitzsimons.

It might have been a case of reverse name recognition. Texas Democratic officials didn't want Friedman occupying a space on the statewide ticket and had backed Fitzsimons, to no avail.

"The Democratic establishment had done a pretty good job of beating up on Kinky Friedman, at least among activists," says Mark Jones, a political scientist at Rice University in Houston. "Where Jim Hogan benefited is that Jim Hogan is a much more comfortable name, and Hugh Asa Fitzsimons III sounds a little elitist."

Hogan had suggested as much himself in a Texas Tribune interview last December.

"Most people don't know who anyone is," he said. "They say 'eenie, meenie, miney, mo,' or they look at a name. They see Kinky Friedman and think, 'That looks familiar...Naw. Asa? Naw. Jim Hogan? I've heard of Hogan! Yeah, I think I'll vote for him! He sounds like a nice guy!'"

Everyone in politics knows that name recognition is important, but a Vanderbilt University study published last year found that even brief exposure to a candidate's name increases support from voters by 13 percent, if they don't know anything else about the candidates.

That might be especially important in Texas, which has very long ballots. Not only does Texas have the most statewide elected officials in the country, but voters in some counties have to decide a dozen or more local judicial elections.

"It's a lot to ask even the best-informed and well-educated voters to make decisions in 20-plus contested down-ballot primary elections," says Byron LaMasters, a Democratic consultant in Texas whose firm worked for Fitzsimons.

A good-sounding name might provide a "mental shortcut," says Matthew Eshbaugh-Soha, a political scientist at the University of North Texas.

For years, an elderly man named Gene Kelly — no relation to the movie dancer — would force Texas Democratic candidates into runoffs, despite a complete lack of active campaigning.

"It's a flaw in our system," Eshbaugh-Soha says. "There's not a strong incentive to go out there and really research this."

The effect of all this for Texas Democrats is that now they're stuck with candidates they might not want anybody to vote for.

Kesha Rogers, a disciple of conspiracy theorist Lyndon LaRouche who has compared President Obama to Hitler, made it into the May 27 runoff for U.S. Senate. The party had sent out emails last week asking voters to oppose Rogers, who was the party's unwelcome nominee for a Houston-area congressional seat in both 2010 and 2012.

Democrats will have to decide whether to back Kinky Friedman against the party's own prior judgment, or take a chance on Hogan in their primary runoff.

"They're back to square one, forced to choose between colorful, comedic Kinky Friedman, or a complete unknown who is an unvetted candidate," says Jones, the Rice professor.

Hogan never even set up a campaign website. He would check for coverage of the race on the Internet during his lunch break, but that was about it.

"Anybody can run for office the way I run it," Hogan says. "All I say is, God must have had a hand in it, because that don't happen every day."