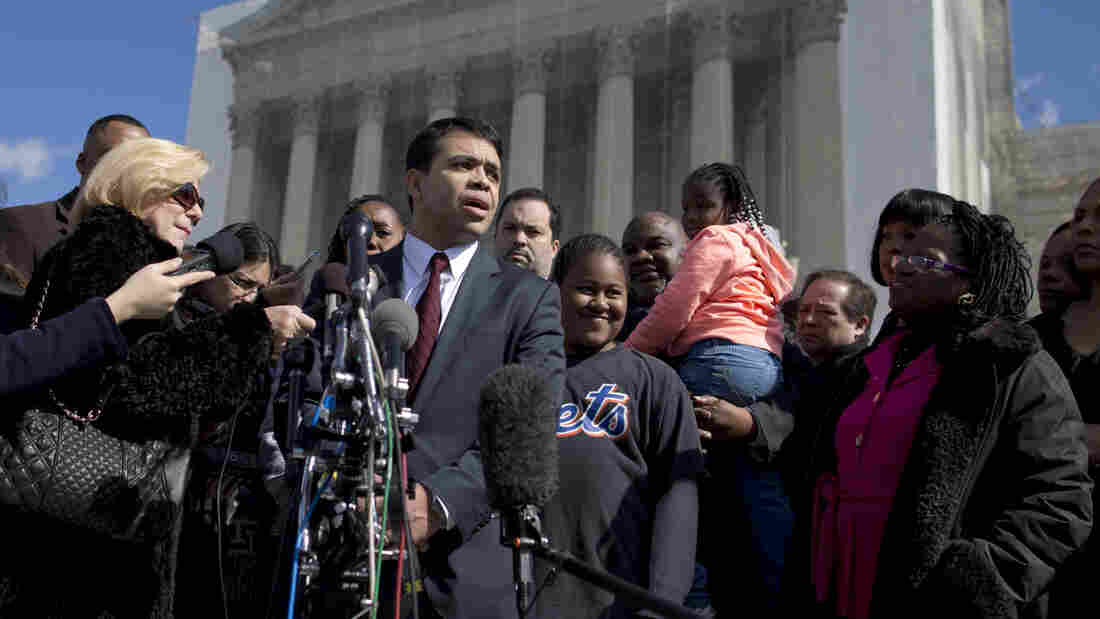 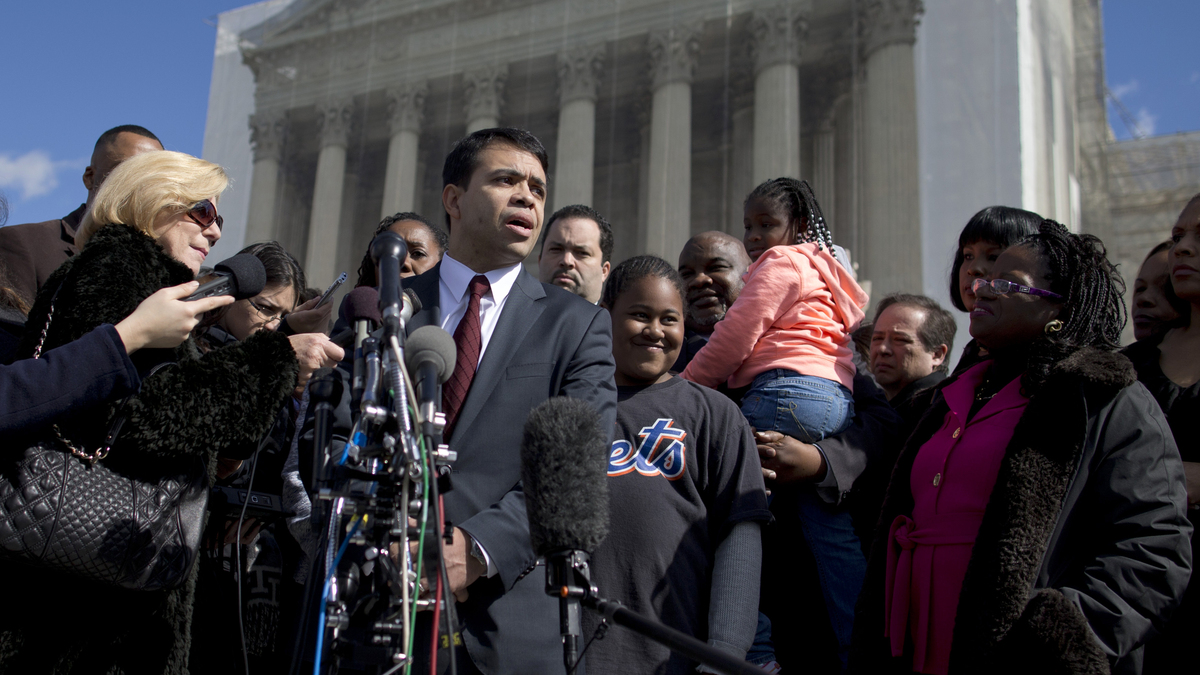 Debo Adegbile, special counsel of the NAACP Legal Defense Fund, speaks with the media outside the Supreme Court in Feb. 2013 after presenting arguments in the Shelby County, Ala., v. Holder voting rights case.

In a stinging blow to the Obama administration, seven Senate Democrats joined with Republicans Wednesday to block one of the president's key civil rights nominees.

The 47 to 52 vote marked the first defeat of a Democratic nominee since lawmakers changed Senate rules to make it easier to push through judges and executive branch candidates. And it came after a clash that pit powerful law enforcement interests against the civil rights community.

A campaign by the Fraternal Order of Police worked to define civil rights lawyer Debo Adegbile through one controversial episode in his long career.

Pennsylvania Republican Sen. Pat Toomey set the stage with this line on the Senate floor: "It was 3:55 AM on December 9, 1981, when 25-year-old Philadelphia police officer Danny Faulkner was brutally murdered in the line of duty."

The killer was Mumia Abu Jamal, an African American activist who was sentenced to death, until a group of lawyers got his sentence reduced to life behind bars by uncovering faults in the case. Attorneys at the NAACP Legal Defense Fund, where Adegbile worked for years, handled some appeals on the case.

That drew the ire of Officer Faulker's widow, who sent a letter to lawmakers read by Sen. Toomey before today's vote. "The thought that Mr. Adegbile would be rewarded in part for the work he did for my husband's killer is revolting."

But McConnell said for him the deciding factor was the Abu Jamal case.

"The decision to champion the cause of an extremist cop killer sends a message of contempt to police officers," he added.

And that was the tone of the day. Adegbile's supporters called it a smear. Democratic Sen. Patrick Leahy of Vermont cried foul, pointing out that no Republicans would work with him to help cops by sending more federal money to buy bullet-proof vests.

"Not a single Republican has joined me in the effort to reauthorize what was a bipartisan piece of legislation that actually saves the lives of police officers," Leahy thundered, "but boy, they will come down here and wax eloquently and misleadingly against this good nominee."

Adegbile has worked for Leahy for months as an aide on the Senate Judiciary Committee. But before that, he spent a decade at the Legal Defense Fund and twice argued voting rights cases before the Supreme Court. Adegbile pulled himself out of poverty and periods of homelessness as the child of immigrants in the Bronx. President Obama held him out as an illustration of the American dream.

Those are solid qualifications to lead the civil rights division at the Justice Department, says LDF president Sherrilyn Ifill, especially since lawyers who work for defendants in criminal cases are simply doing their job.

"The criminal defendants that we represent, we represent to vindicate constitutional principles and it's never more important than in capital cases where we're talking about the state exercising the authority to take the life of a human being," she said.

After all, Ifill said, that never stopped John Roberts from getting confirmed to the U.S. Supreme Court.

"That's why even people like Chief Justice John Roberts could donate 25 hours of pro bono service during the time he was a law firm partner to a man who had committed multiple murders in the state of Florida," Ifill added.

But sources tell NPR the administration never properly vetted Adegbile's nomination with police groups before it happened. And cops were furious.

Law enforcement turned up the heat and Senate Democrats badly miscalculated the numbers. They labored to check the votes of several Democrats facing close elections this fall but overlooked too many members of their base.

One of the biggest surprises was Democratic Sen. Chris Coons of Delaware, who voted for Adegbile to proceed through the Judiciary Committee before voting against him on the Senate floor.

Coons, who chaired part of Adegbile's nomination hearing, said he "was troubled by the idea of voting for an Assistant Attorney General for Civil Rights who would face such visceral opposition from law enforcement on his first day on the job."

He added: "The decades-long public campaign by others...to elevate a heinous, cold-blooded killer to the status of a political prisoner and folk hero has caused tremendous pain...and shown great disrespect for law enforcement officers and families throughout our region. These factors have led me to cast a vote today that is more about listening to and respecting their concerns than about the innate qualifications of this nominee."

Majority Leader Harry Reid of Nevada gave voice to the uncertainty,but too late to do anything about it.

"I sure hope that we get enough votes for this good man," Reid said. "If we don't, maybe it's time America had a good discussion on civil rights."

As the vote drew near, Vice President Joe Biden showed up to help break a possible tie.

But so many Democrats defected that it wasn't even close.