Accessibility links
Hispanic Activists Vow To Keep Pressing White House Over Deportations : It's All Politics Amid pressure to slow deportations and after meeting with Hispanic congressional leaders, President Obama said he would look at more humane ways to enforce immigration laws. 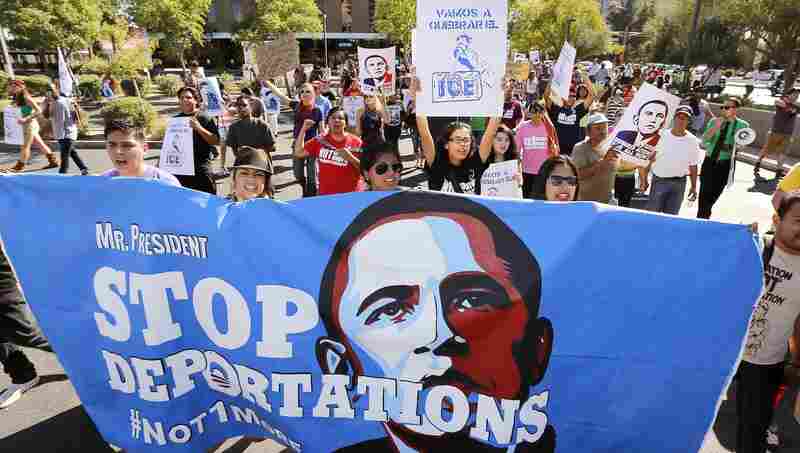 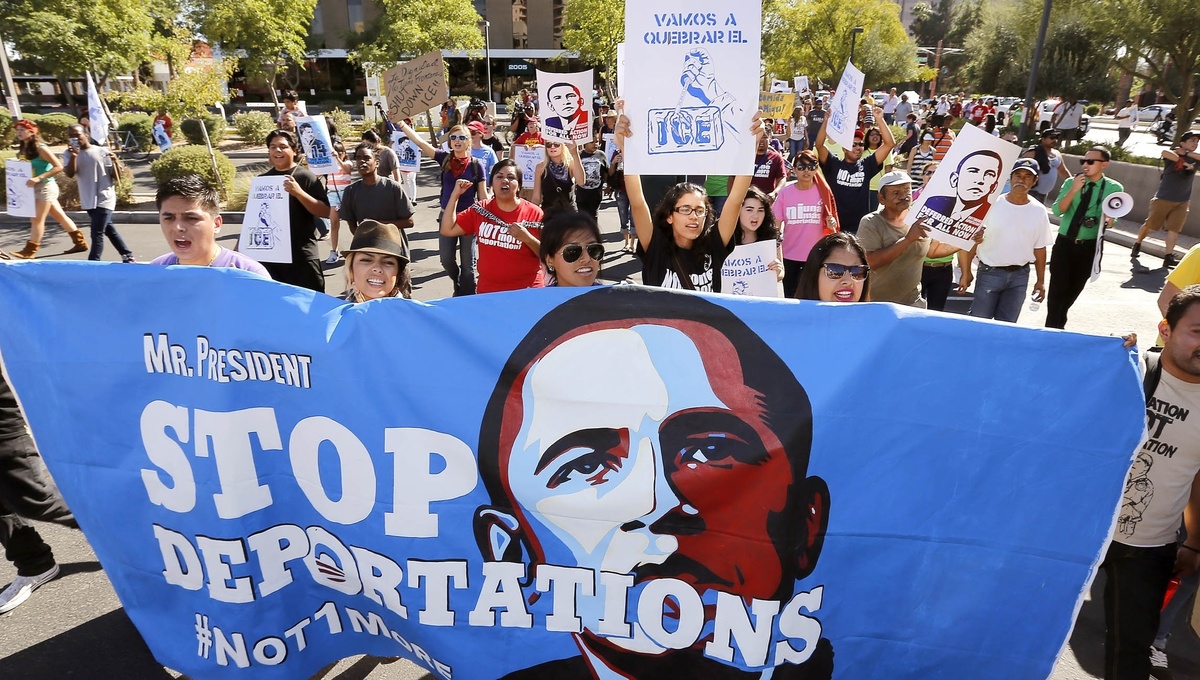 Five months before his 2012 re-election, President Obama announced that his administration would stop deportations of more than a half-million young adults, often referred to as "Dreamers," brought illegally to the U.S. as children.

Latinos subsequently turned out to vote in record numbers that fall. More than 70 percent marked their ballots for Obama — helping him win the popular vote and triumph in key battleground states.

But with growing anger among Latinos over the continued aggressive pace of adult deportations, and with Democrats facing an unforgiving midterm election season, Obama said Thursday he would review the administration's immigration enforcement policies. The pivot came amid pressure to slow deportations — or even halt them for some new groups.

"In my humble opinion, there is nothing to stop the president of the United States from saying the moms and dads of the Dreamers should be able to apply for the same kind of discretion as their children," said Rep. Luis Gutierrez, D-Ill. He was among Hispanic congressional leaders who met Thursday with Obama to discuss immigration and the increasingly contentious deportation issue.

Before the meeting, "the president said there was nothing he could do about" the deportations, Gutierrez said in an interview Friday with NPR. (There have been more than 2 million during Obama's administration.)

"Yesterday, he said, 'We're looking at options,' " Gutierrez said. "I think that's a step in the right direction."

Though the White House has indicated it is unlikely to expand the Dreamers' deportation moratorium, the topic is expected to be part of conversations that Hispanic leaders will be having with administration officials in coming weeks. Other options also being discussed include suspending deportation of parents and spouses of U.S. citizens, of immediate family of military service members, and of people with temporary immigration status who could be allowed to apply for permanent status.

Gutierrez and fellow members of the Congressional Hispanic Caucus dropped plans to introduce a resolution to urge the president to slow deportations in the interest of keeping families together.

"It seems better to speak with someone than pass a resolution," Gutierrez said.

Obama's post-meeting pledge to see how his administration "can conduct enforcement more humanely within the confines of the law" prompted a warning from Republicans that unilateral executive action could jeopardize the prospects of comprehensive immigration overhaul legislation.

A comprehensive bill passed by the Senate last June has languished in the GOP-controlled House. On Thursday, House Republicans passed a bill that would allow Congress to sue the president for failing to enforce immigration laws by offering temporary legal status to Dreamers.

A 2011 memo on deportation by the Congressional Hispanic Caucus for Obama provides insight into what Latino activists are pushing for from the president and the Department of Homeland Security, which enforces immigration law.

That memo, which outlined the Dreamers action taken by the president a year later, also describes what it characterizes as legal ways that deportations that separate families can be mitigated in the absence of a comprehensive national immigration policy.

The memo, provided by Gutierrez's office, proposes deferred deportation actions for otherwise law-abiding parents of DREAM-eligible individuals, and for the parents of children born in the U.S., but who have overstayed their visas.

Young people eligible as Dreamers (named after failed DREAM Act legislation) are immune from deportation if they were brought to the U.S. before age 16, have lived in the country for five consecutive years, graduated from high school or served in the military, and have no convictions for felonies, or for significant or multiple misdemeanors.

When Congress returns from its spring break at the end of the month, Hispanic congressional leaders will meet with Homeland Security Secretary Jeh Johnson.

Until then, says Gutierrez, Latino activists will keep up pressure on the president, and on House Republicans.

"There is no confusion in the immigrant community about which party is blocking immigration reform," he said, noting that 2000 Latino citizens turn 18 every day — a "demographic tsunami" that he says Republicans know is coming and can't ignore.

And about anger toward Obama, whom some Latino activists have dubbed "Deporter in Chief," he said this: "He's our friend. He's our ally. This is not easy. I have nothing but respect, admiration and love for Barack Obama."

But, he adds: "Our first allegiance is to the immigrant community, and second to our party."

Just how far the president will go to placate that community during a midterm election year that has his party on the run remains to be seen.