Accessibility links
Google Glass: Coming Soon To A Campaign Trail Near You : It's All Politics Google Glass is still in the testing phase and still rather expensive, but that hasn't stopped political professionals from looking for ways Google Glass can become a powerful tool for campaigns. 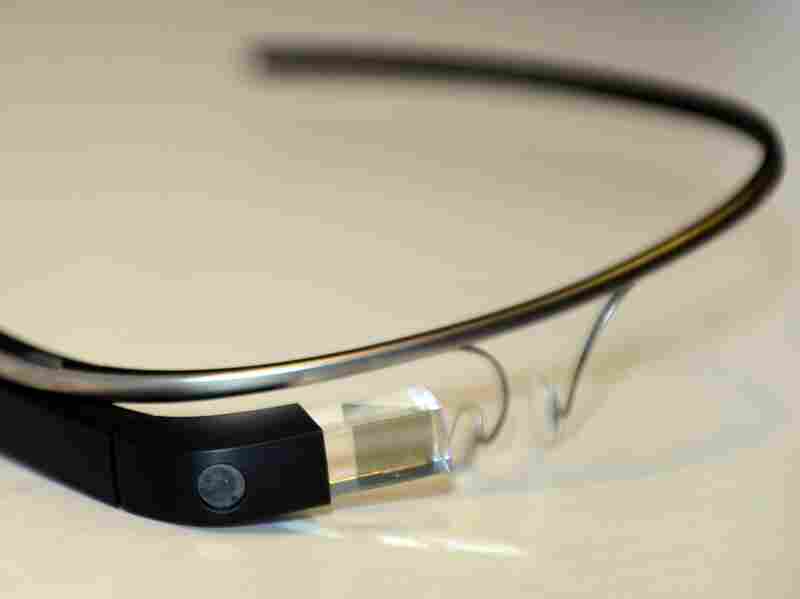 Campaign workers and other political operatives are trying to find ways to use Google Glass on the campaign trail. Frederic J. Brown /AFP/Getty Images hide caption

Google Glass is looking to be the next must-have digital device. The small computer you wear like eyeglasses allows you to surf the Web, email, text, take photos, shoot and stream live video and more — hands-free.

For now Google Glass is in very limited release, but even so, political professionals are eagerly exploring how it could become a powerful campaign tool.

I have been covering big, crowded political events of all kinds for a long time: conventions, campaign rallies, caucuses, committee meetings. But at this month's Conservative Political Action Conference I encountered something I'd not seen before: an activist working the bustling hallways wearing Google Glass.

"I'm trying to figure out ways activists can use it in the field," says Peter Ildefonso, a 25-year-old Republican and software developer from Severna Park, Md.

Ildefonso works for the nonprofit Leadership Institute, which trains young conservatives. In a webinar, two members of their team discuss Google Glass and its uses as a tool to capture video of the opposition at public events and rallies. They cite its advantages over a cellphone camera and its ability to capture more footage while moving around more freely, "without being as obvious."

Betsy Hoover is with a group called 270Strategies. "I do think that wearable technology, Google Glass being the front-runner of that right now, is fascinating," she says.

Glass could make it easier to communicate more seamlessly with campaign workers. Someone at headquarters, for example, could send a message to the screen of a volunteer standing on a porch knocking on a door, or watch a live video stream of volunteers talking to voters — depending on privacy laws, of course.

Then there's social media. The 2012 Obama campaign used Twitter and Facebook to connect supporters with one another. Hoover says those sites became even more important because people could access them on their smartphones. Hoover says Google Glass takes things to the next level.

And, she says, Google Glass wearers may even be able to receive information about a rally nearby, or volunteer opportunities, all based on their location at any moment.

"People are instantly available, and that's really exciting in terms of what campaigns and elected officials can do," she says.

Daniel Kreiss, a professor at the University of North Carolina, studies the impact of evolving technology on political campaigns.

Kreiss cautions, though, that because Google Glass isn't available to the general public yet, it's not yet known whether it will take off commercially — something that would be necessary for it to be a hit in the political world.

He suggests that it will help campaigns get even better at the basics, "which is making voter contacts and monitoring the opposition, whether it's on the campaign trail or whether it's making contact with a voter at the doorstep or at a party convention."

Don't look for Google Glass to play a big role in this year's elections. Recall that in 2008, Twitter was around but not a big deal. By 2012, both major presidential campaigns had Twitter war rooms. Google Glass might one day have a story like that of its own.