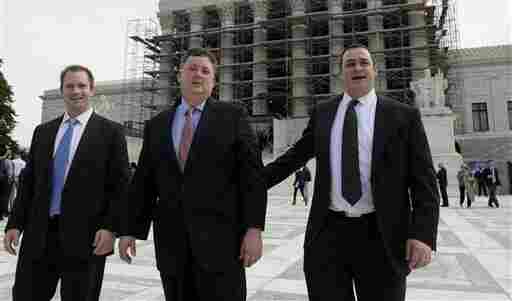 The Supreme Court victory for Republican activist Shaun McCutcheon (center) was also a win for those in the political campaign business. Susan Walsh/AP hide caption

The Supreme Court's McCutcheon decision has been described both as a victory for the First Amendment and as another damaging blow to campaign finance laws.

One thing seems certain: The decision, which overturned limits on the aggregate amounts individual donors can give to candidates and campaigns, will mean more money sloshing around political campaigns.

In practical terms, that means more business for the political consultants who orchestrate most serious federal political campaigns.

"Campaigns have been on the short end of the stick with people giving more money to some of the independent groups," Art Hackney, an Alaska political consultant who is president of the American Association of Political Consultants told It's All Politics. "I think parties themselves, yes, hopefully will have the resources, which will impact our industry.

"They'll be able to hire people who do voter identification and a lot of the specialties — the phone work, the mail work — that all costs money," Hackney said. Theoretically, the ruling should increase the amount directly donated to candidates for such political activities.

Hackney said he and most other Republicans, with notable exceptions like Sen. John McCain, R-Ariz., welcomed the decision as "constitutional." Democrats largely did not.

"Now, for instance, by eliminating aggregate contribution limits, nothing can stop a single millionaire from lining the pockets of an entire state's congressional delegation or giving one check to every member of a party in Congress," said Sen. Chuck Schumer, D-N.Y.

Reince Priebus, the Republican National Committee chairman, said the ruling will immediately help the national party committees because it allows them to raise more hard money overall, the kind that can be used directly to support or attack candidates. The RNC financed plaintiff Shaun McCutcheon's appeal to the Supreme Court.

Highly regulated political contributions made directly to candidates for federal office or parties are considered hard money. That contrasts with unregulated soft money contributions. Party committees are banned from raising soft money by the McCain-Feingold campaign finance law of 2002.

"What this does do for us, it allows us to go to our donors and say 'Look, instead of only being able to give to nine Senate candidates, you can now give to the 14 that are most in play. And you can give to the Senate committee, the congressional committee and the RNC and you can max out to all three,' " Priebus said. "That makes a big difference with hard money that can be coordinated with candidates.

"I think this is a good day because the First Amendment applies to all of us," he said. "People should have the right to give their money, and exercise their free speech, to as many candidates and as many political committees and PACs as they want to. Everything's fully disclosed. The individual limits are still there."