Accessibility links
Are Democrats Trying To Energize The Base With The Race Card? : It's All Politics Top Democrats have said recently that some GOP opposition to President Obama and his agenda is based on race. It's an explosive message that might drive Democratic voters to the polls.

Are Democrats Trying To Energize The Base With The Race Card?

Are Democrats Trying To Energize The Base With The Race Card? 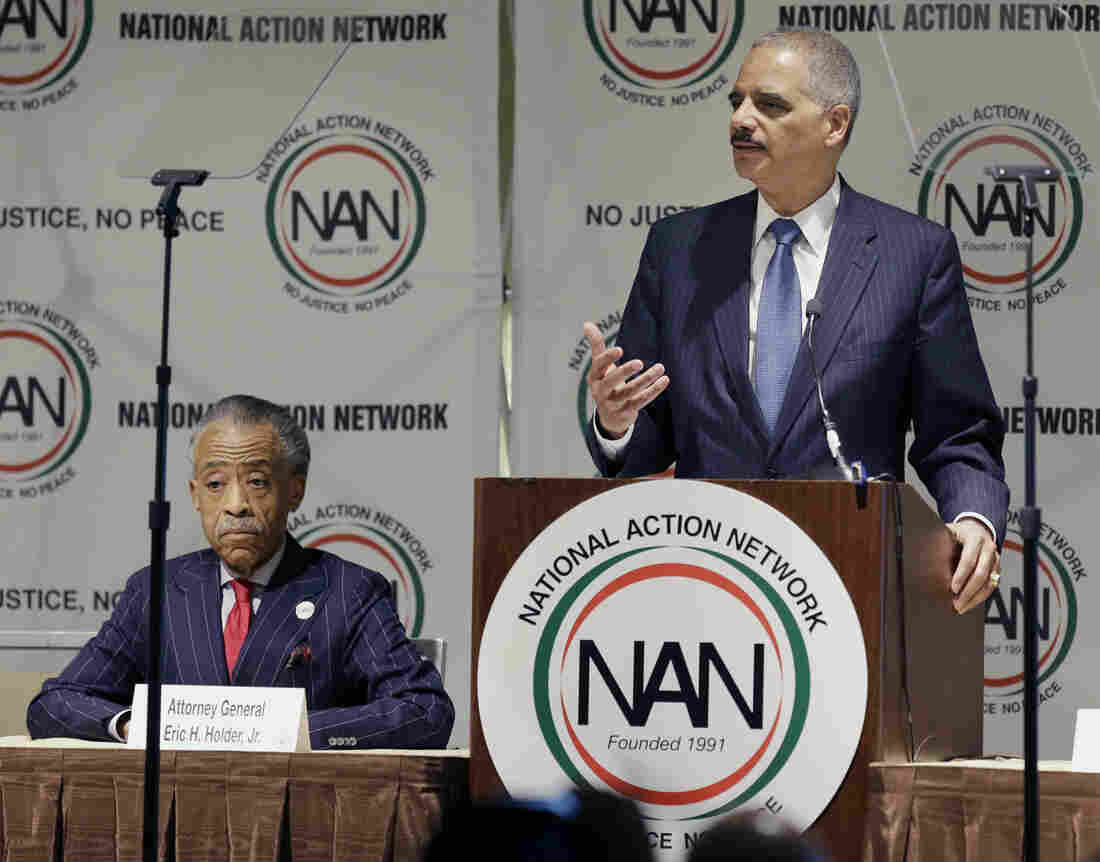 Attorney General Eric Holder (right) recently expressed outrage at the treatment President Obama and he have received from conservatives. He stopped just short of saying it was race-related, leaving that for the African-American audience at the recent National Action Network convention to decide. Seth Wenig/AP hide caption 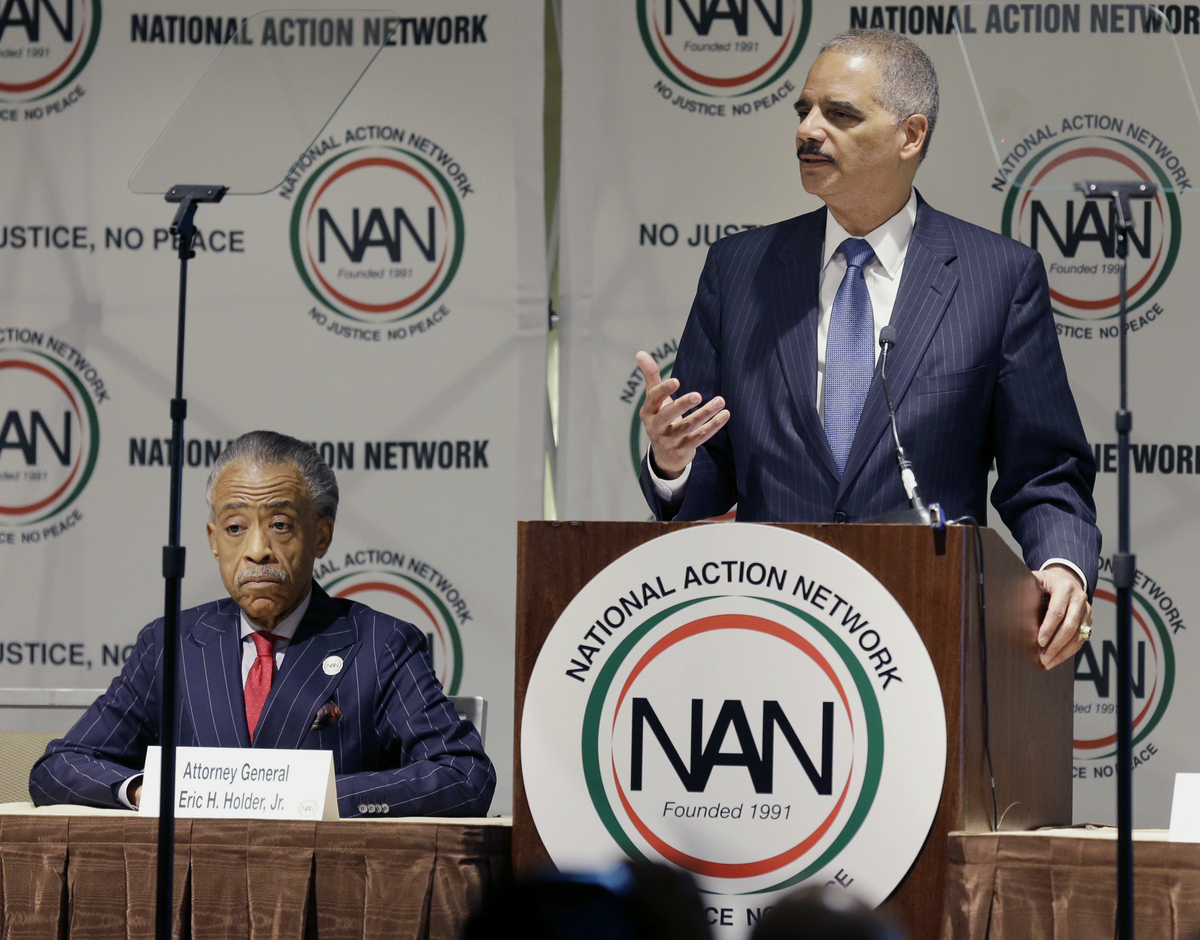 Attorney General Eric Holder (right) recently expressed outrage at the treatment President Obama and he have received from conservatives. He stopped just short of saying it was race-related, leaving that for the African-American audience at the recent National Action Network convention to decide.

Few mixtures in American life are more emotionally combustible than the one formed by the combination of politics and race.

That helps explain why Democrats, in general, and President Obama, in particular, have tended to steer clear of overtly raising race as an issue to explain some of the opposition to Obama's presidency and agenda.

There seems to be a shift in recent days, however.

Top Democratic party officials have either directly or indirectly blamed race for some of the hostility to Obama, his policies, or both.

Rep. Nancy Pelosi, the House Democratic leader from California, and New York Rep. Steve Israel, who heads the Democratic Congressional Campaign Committee, both cited racism, pure and simple, among some Republicans as explanations for the House GOP's resistance to legislation that would comprehensively overhaul the nation's immigration laws.

Meanwhile, Attorney General Eric Holder took a slightly subtler approach. Speaking to the National Action Network, the largely African-American civil rights group founded by the Rev. Al Sharpton, Holder suggested some Republicans had a racial animus toward the president and himself.

"The last five years have been defined by significant strides and by lasting reforms even in the face, even in the face of unprecedented, unwarranted, ugly and divisive adversity," Holder said.

All of this has led to accusations that Holder, Pelosi and Israel are themselves guilty of playing the race card.

The attorney general later pointedly stated that he never explicitly said race explained the political right's treatment of him or the president. Instead, he said his complaint was about Washington's growing incivility.

What Holder demonstrated is that just as those on the right can use dog whistle politics to motivate their base, those on the left can also send messages that are heard a certain way by theirs.

It's a safe bet, for instance, that many African-Americans who heard or read Holder's words didn't doubt he was talking about race. And he did it without ever uttering the R-word like Pelosi and Israel.

Is this partly about activating minority voters during a midterm election year in which Democrats stand a good chance of losing the Senate if their voters don't go to the polls in numbers? Could be.

When Obama has been on the ballot, minority voters, especially African-Americans, didn't need much more motivation than that to vote. But a midterm election when he's not on the ballot is different.

Social scientists who have studied voters have found that voter participation rises when voters are emotionally engaged.

For some voters, suggestions that some of the opposition to Obama and his policies is more than just honest disagreement — and is indeed racially based — could help do the trick.

The Democrats' use of voting rights strikes the same chord. Voting rights and race have been so inextricably linked in the nation's history, and in the African-American experience, that Obama can send a resonant message to many minority voters without ever explicitly mentioning race.

He did exactly that when he spoke to the same Sharpton group as Holder, a few days after the attorney general.

That those Johnson-era laws were needed to counter racist laws and practices that prevented blacks from voting, especially in the South, could go unsaid before an audience well-steeped in that racial history.

"You think about Brown v. Board of Education, and the Civil Rights Act, and the Voting Rights Act, and Freedom Summer," Obama said. "And with those anniversaries, we have new reason to remember those who made it possible for us to be here." He mentioned three civil rights workers who became famous after they were killed registering Mississippi blacks to vote.

"James Chaney and Andrew Goodman and Michael Schwerner believed so strongly that change was possible they were willing to lay down their lives for it," Obama said. "The least you can do is take them up on the gift that they have given you. Go out there and vote. You can make a change. You do have the power."

"People died so you can vote" is a powerful emotional appeal. Come November, we'll see if it was powerful enough.