Accessibility links
Democrats Play Wait-And-See On Benghazi Panel : It's All Politics Despite a call from some to boycott the GOP's newest Benghazi probe, Minority Leader Nancy Pelosi and other Democrats aren't going that far — yet. 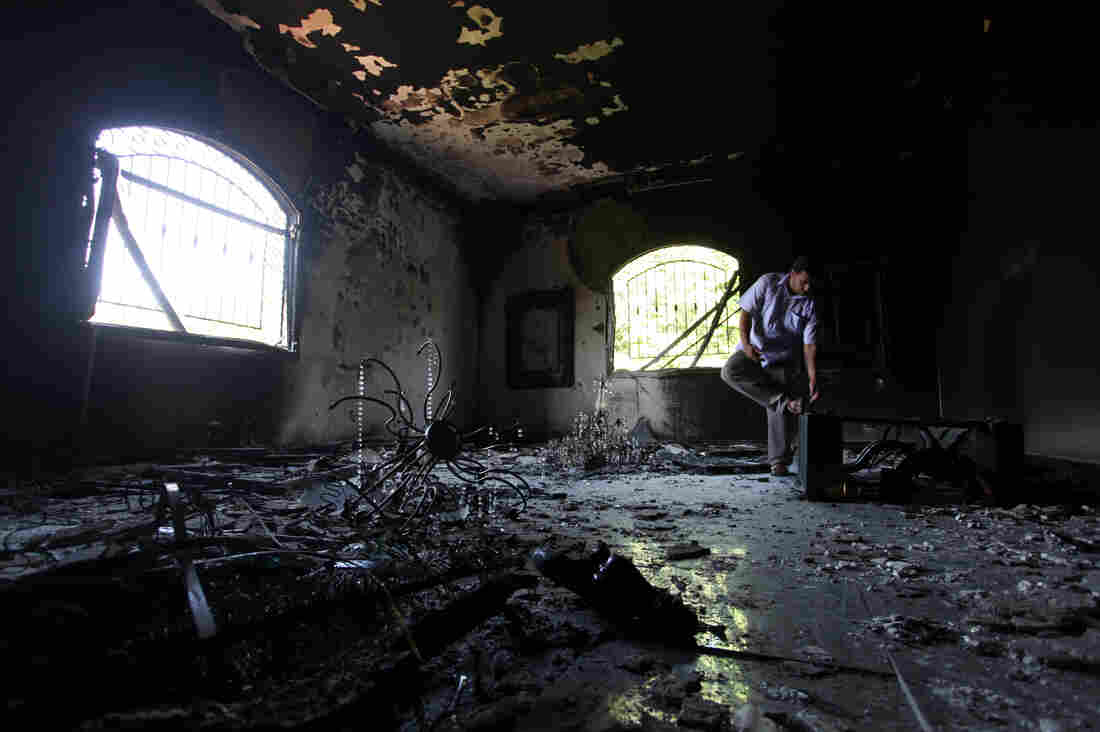 A Libyan man is shown inside the U.S. Consulate in Benghazi, Libya, after an attack that killed four Americans, including Ambassador Chris Stevens, on Sept. 11, 2012. Mohammad Hannon/AP hide caption 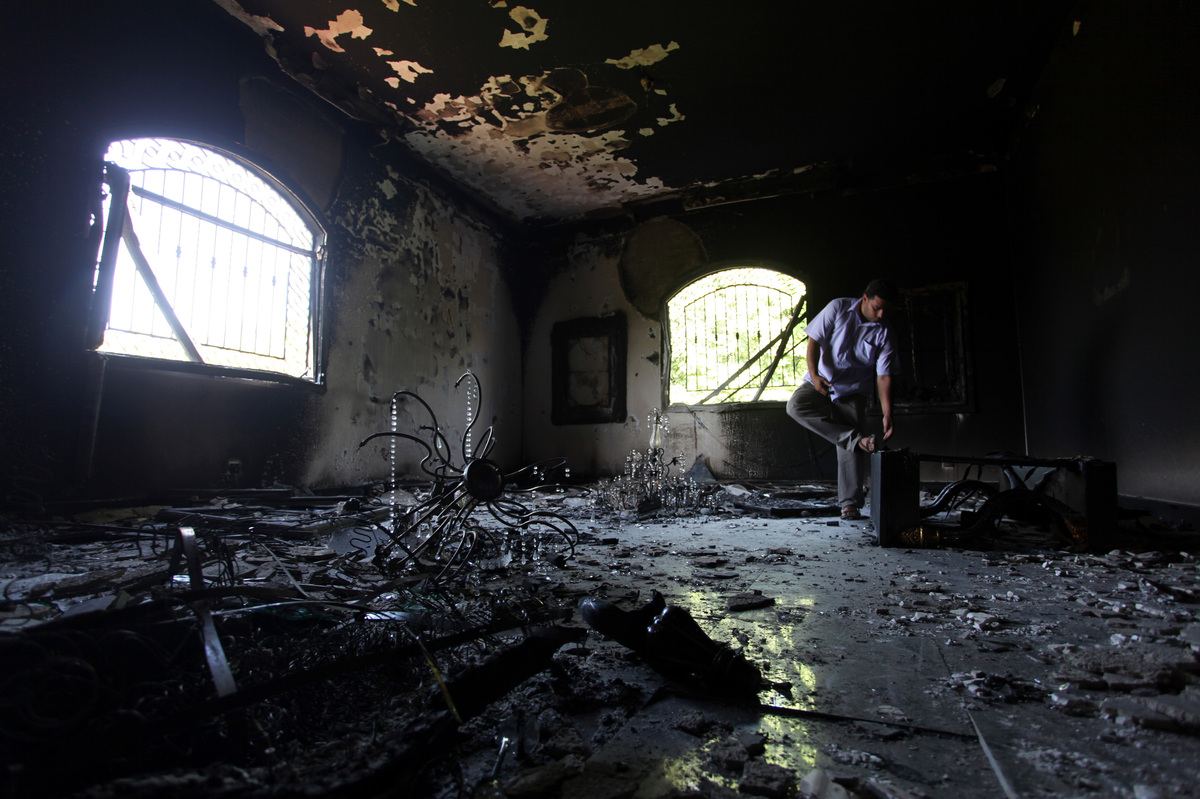 A Libyan man is shown inside the U.S. Consulate in Benghazi, Libya, after an attack that killed four Americans, including Ambassador Chris Stevens, on Sept. 11, 2012.

Late Tuesday, House Republicans made public on Speaker John Boehner's website their draft resolution to create the Benghazi select committee. The resolution calls for a panel of seven Republicans and five Democrats and no written rules for the panel.

House Democrats responded with a letter from Rep. Nancy Pelosi, the minority leader, and Rep. Steny Hoyer, the minority whip, denouncing the Republican decision to ignore Democratic calls for the panel's membership to be evenly split.

As of this update, Democratic leaders have not yet said whether their members will participate in or boycott the select committee.

While at least one of their number has said House Democrats should boycott the new select committee created by Speaker John Boehner to further investigate the 2012 Benghazi, Libya, attack that left four Americans dead, other Democrats aren't yet willing to go that far.

True, Democrats consider it a GOP election-year political stunt. They see it as as a Boehner attempt to mollify conservatives after he mocked them on immigration legislation, one which would excite the Republican base, keep the White House on its heels and muddy up Hillary Clinton in advance of 2016.

But while boycotting the select committee, as California Democrat Rep. Adam Schiff has suggested, might de-legitimize the panel, it would also give Republicans an open road to deliver whatever messages they wanted without any immediate Democratic interference. That approach presents obvious problems.

That helps explain why Democrats generally haven't decided yet what their next move will be. Instead, they're putting the onus on Republicans. First, they want to see if Republicans will meet Democratic definitions of fairness as laid down Tuesday by Democratic Minority Leader Nancy Pelosi.

"If this review is to be fair, it must be truly bipartisan," Pelosi said in a statement. "The panel should be equally divided between Democrats and Republicans as is done on the House Ethics Committee. It should require that witnesses are called and interviewed, subpoenas are issued, and information is shared on a bipartisan basis. Only then could it be fair."

House Republicans were quick to point out that in 2007, shortly after Democrats assumed House control, Pelosi named a select committee on global warming that wasn't equally balanced but tilted 9 to 6 in Democrats' favor. The message to Pelosi seemed clear: it's payback time.

House Democrats will, by and large, vote against the Benghazi panel when it formally comes to a floor vote — expected Thursday.

There could be a few defections on the vote but for the most part Democrats are saying they don't think the investigation by the new committee, to be chaired by Rep. Trey Gowdy, R-S.C., will accomplish anything more than the probe by the existing House Oversight and Investigations Committee under its chairman, California Rep. Darrell Issa.

Rep. Elijah Cummings, the top Democrat on that committee, made just that point:

"This new select committee appears to be nothing more than a reaction to internal Republican bickering rather than a responsible effort to obtain the facts, especially since the new committee will not have any powers that Chairman Issa doesn't have already—including the ability to issue unilateral subpoenas for any document or any witness, which he just used to subpoena ... Secretary of State (John Kerry)," he said in a statement.

The new select committee was in part a response to a White House aide's email dating to the days after the Benghazi attack — which only recently emerged as the result of a conservative group's freedom of information request.

The email from Ben Rhodes, a White House national security official, didn't really reveal much more than what was already out there: that, during an election year, the White House was concerned about shaping the public perception about the attacks that killed Ambassador Chris Stevens and three other Americans.

But it was enough to give new momentum to Republicans who sought the latest probe.

The White House isn't advising House Democrats, at least not publicly, on whether to participate on the panel. But White House press secretary Jay Carney leaves no doubt that the administration's preference would be for congressional Republicans to move on from Benghazi.

"It's pretty blatantly apparent, based on what they've said and what even other Republicans have said, that this is a highly partisan exercise. But I'm not going to go further than that," Carney told journalists Monday. "We leave it up to Leader Pelosi and Democrats on the Hill to decide how they want to approach this."