Accessibility links
The Congresswoman Whose Husband Called Her Home : It's All Politics Coya Knutson was the first woman elected to Congress from Minnesota. But the charismatic farmer's daughter saw her political career derailed by one of the worst dirty tricks ever.

The Congresswoman Whose Husband Called Her Home

The Congresswoman Whose Husband Called Her Home 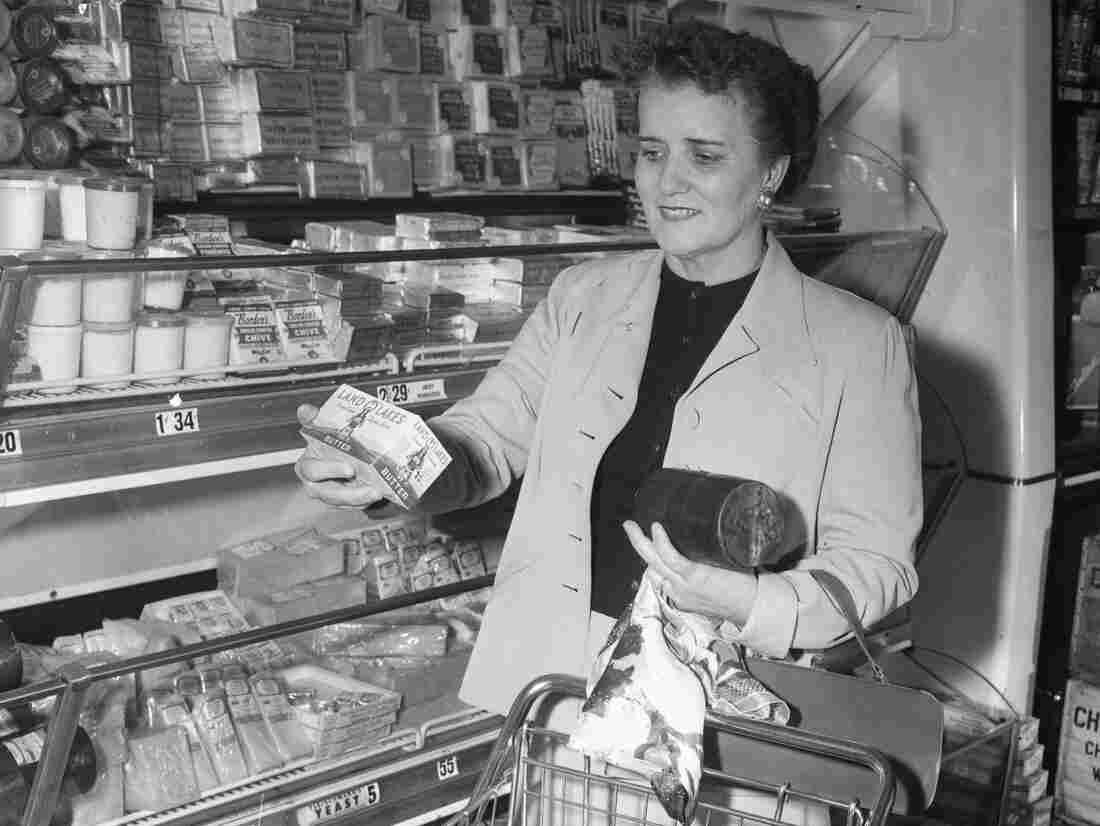 Rep. Coya Knutson (D-Minn.), is shown shopping in a supermarket in 1955 following her demand to know why her fellow housewives remain saddled with high grocery bills while farm income continues to drop. Maurice Johnson/Bettmann/Corbis hide caption 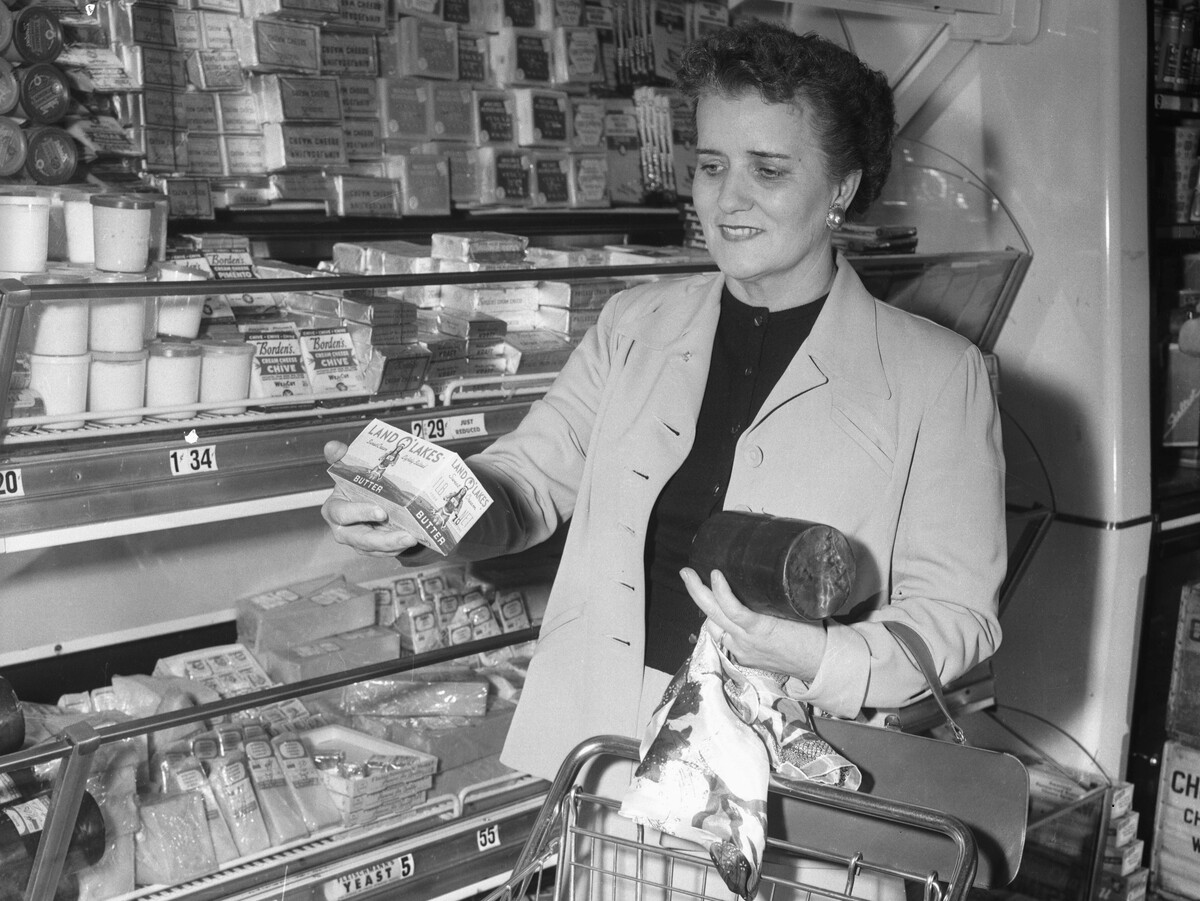 Rep. Coya Knutson (D-Minn.), is shown shopping in a supermarket in 1955 following her demand to know why her fellow housewives remain saddled with high grocery bills while farm income continues to drop.

Fifty-six years ago this weekend, newspapers across the nation told a sad tale of a family seemingly imploding.

At the center of the story was Coya Knutson, the opera-singing daughter of a Norwegian farmer, and the first woman from Minnesota elected to Congress.

Voted in on her own merits, not appointed to keep a late husband's seat warm for a successor, the trailblazing mother could only watch as vengeful party rivals, a manufactured scandal, and a feckless, alcoholic husband combined to sabotage her career.

Never heard of the charismatic Knutson, who briefly studied opera at the Juilliard School in New York before returning home to become a schoolteacher and political activist?

Not many have, even in her home state.

But during the late 1950s, when Knutson was running for her third U.S. House term representing Minnesota's rural 9th District, she briefly but spectacularly made the front pages across the nation.

Not for her work on Capitol Hill establishing the first federal student loan program and first grants for cystic fibrosis research. Or for being the first congresswoman ever appointed to the House Agriculture Committee – at the insistence of House Speaker Sam Rayburn over vehement gender-based objections of its chairman.

It was because of an infamous letter, signed by husband Andy back in tiny Oklee, Minn., but widely believed to have been written by grudge-driven operatives in the congresswoman's own party, the progressive Democratic-Farmer-Labor (DFL) Party.

The letter — urging her to abandon the nation's capital and return to hearth and home — was first published in a regional newspaper under the headline, "Coya Come Home."

It spread like a virus, inspiring overheated stories nationwide. Like one in a Pennsylvania newspaper that described the "honey-blonde" congresswoman looking haggard as she "came out of hiding" to insist she wasn't angry at her husband.

"It's the dirtiest trick I've ever seen in politics," says Gretchen Beito, a Minnesota author who chronicled Knutson's historic path in the book, Coya Come Home.

Knutson's son Terry, now 74, had campaigned with his mother as a teenager but was already in college when the rumpus erupted. He said DFL operatives had also engaged a spurious whisper campaign back in his mother's very religious district that she was having an affair with a young man who was her top aide.

"They wanted to get even with her, to get her out of Congress," Knutson says.

What prompted this enmity? These reprisals? Historians largely agree that the Knutson was vulnerable only in part because of her gender at a time when the prevailing sentiment was that a woman's place was in the home.

"Women themselves resented her," says Beito, the author. "She was doing what women weren't supposed to do."

The populist Knutson's greatest political sin was that she had the temerity to buck party bosses at least twice, and with great success.

First, when, as a state legislator, she used her estimable campaigning skills – which included fluency in Norwegian and a charming ability to sing and play the accordion — to challenge and defeat the DFL's choice on her way to her first term in Washington.

Kefauver crushed Stevenson in the Minnesota presidential primary that year, a shocking embarrassment to party bosses, and an end to Humphrey's drive to be on a national ticket. Knutson won re-election that year, but was forced to again beat back a party-backed primary challenge two years later when she set out to win her third term.

Even so, her detractors were persistent, and played their trump card before the fall election.

"They decided to go to Andy," Terry Knutson says, "and pay him cash to sign the letter."

That letter urged the congresswoman to abandon her re-election campaign and "go home a make a home for your husband and son." It went on: "As your husband I compel you to do this...I'm sick and tired of having you run around with other men all the time and not your husband. I love you honey."

Says Terry Knutson: "After that, it was pretty much over," even though his adoptive parents hadn't been living together for years, he says, because of Andy's drinking and abusive behavior.

Coya Knutson lost to a Republican challenger – "A Big Man for A Man-Sized Job" was his slogan — in the fall of 1958. She obtained a divorce few years later, but steadfastly refused to speak ill of her husband. He died of alcoholism in 1969, but not before he admitted he did not write the famous letter.

"She had a philosophy that 'vengeance is mine, sayeth the Lord,'" said Beito. "That was her mantra."

A handful of party old-timers like George Farr, 90, who served as DFL state chairman in the 1960s, still assert that it was the unfounded rumor of the affair that undid Knutson, not any organized effort to oust her.

Her support of Kefauver, Farr insists, "was not a major factor" in her downfall.

"It's one of those deals where, as a candidate, you have to keep your home base secure," he says. "She let it get away from her."

Knutson lost two subsequent runs for Congress, but did return to Washington to work in the Defense Department. She eventually came back to her home state, where she lived with her son and his family until her death nearly two decades ago at age 84.

Legislation to establish a memorial in her honor in or near the State Capitol in St. Paul was vetoed in 1997 by GOP Gov. Arne Carlson. Knutson, he argued, hadn't been dead long enough to qualify.

In Oklee, where, inspired by Eleanor Roosevelt, Knutson launched her historic, if truncated, political career, a billboard that greets visitors proclaims its pride as the home of the state's first female member of Congress. Former Vice President Walter Mondale, a Minnesota Democrat, described Knutson in a 1997 salute to her in the Congressional Record as "electric."

At her funeral, family played an interview Knutson recorded with one of her young relatives. "Just strike out," she said, in what the Star Tribune newspaper reported was a bold, robust voice.