Accessibility links
A Role Reversal In Pennsylvania's Race For Governor : It's All Politics GOP Gov. Tom Corbett is using a populist attack against Tom Wolf, the businessman who is leading the Democratic field in the May 20 primary.

A Role Reversal In Pennsylvania's Race For Governor

A Role Reversal In Pennsylvania's Race For Governor 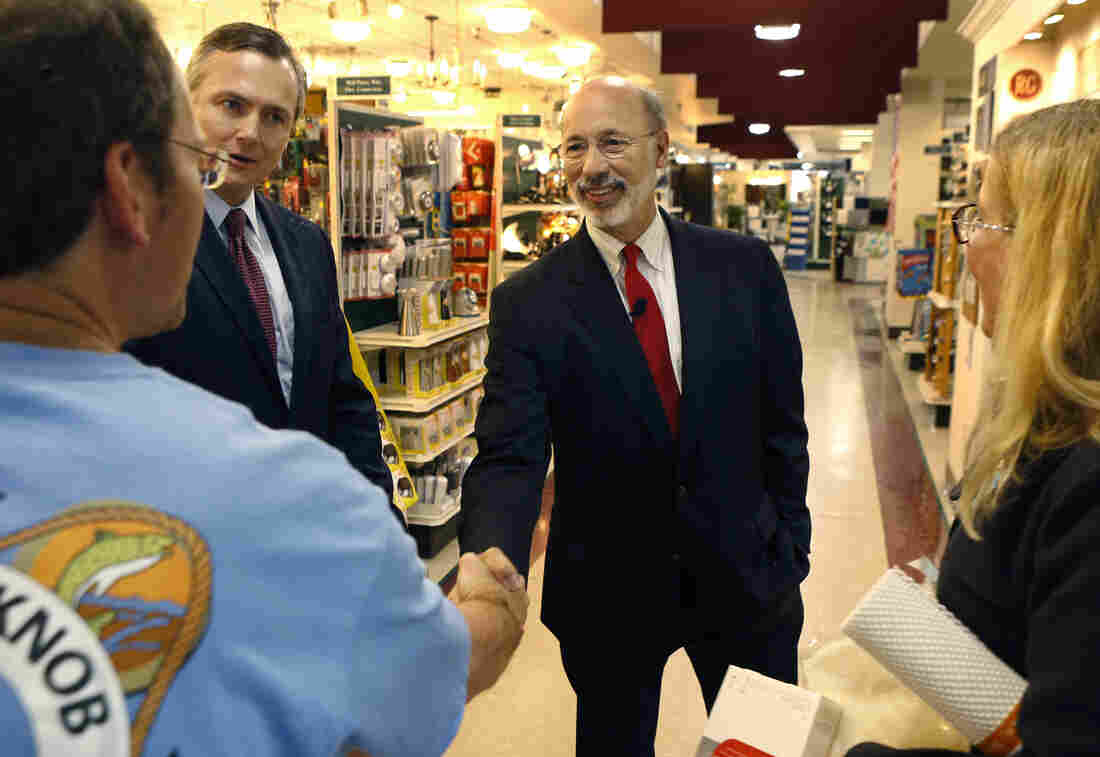 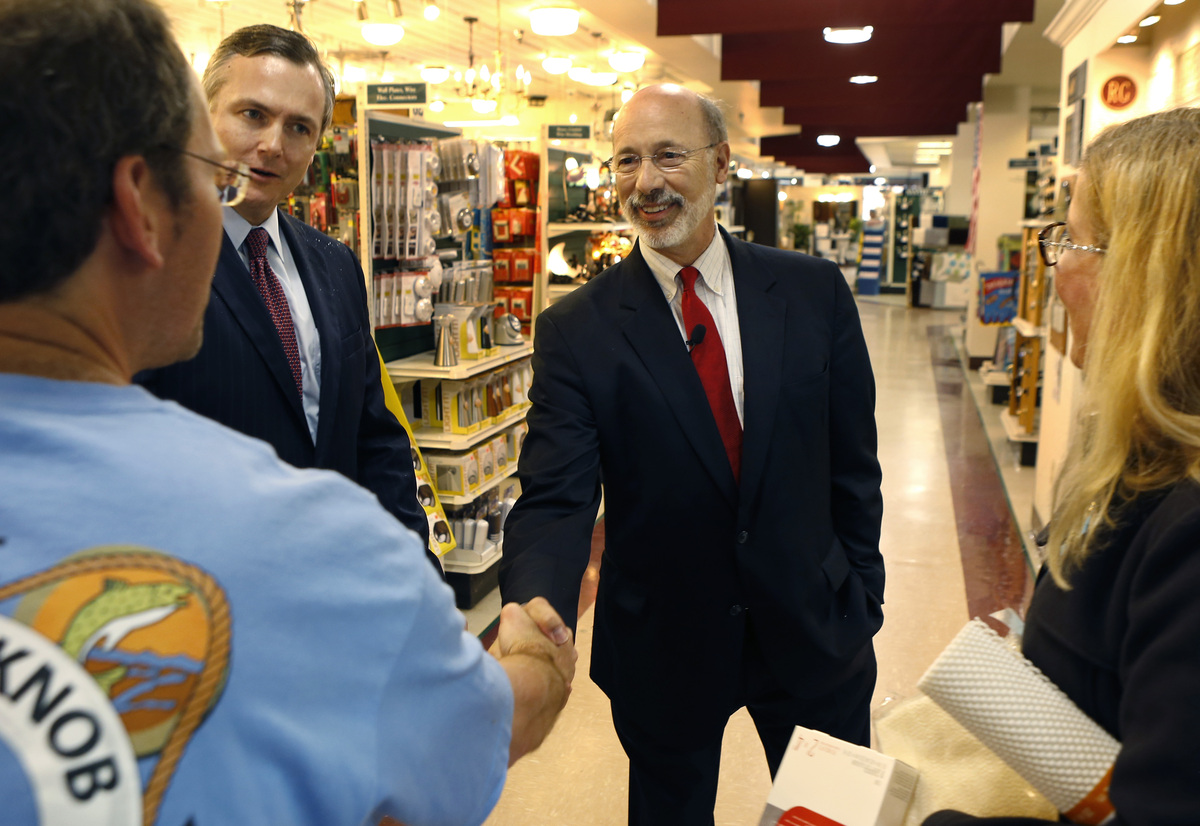 Tom Wolf, who leads in polls for Pennsylvania's Democratic gubernatorial nomination, shakes hands with a customer at a Mount Lebanon, Pa., hardware store on Thursday.

If the polls are correct, the Pennsylvania governor's race is poised to see the usual political script flipped.

The Republican incumbent, Gov. Tom Corbett, is using a populist attack against the challenger who is leading the Democratic primary field — accusing Tom Wolf of being an opportunistic businessman who profited at the expense of taxpayers and workers.

At this point, the May 20 Democratic primary seems Wolf's to lose: A recent Franklin and Marshall College poll released May 14 put Wolf's support at 33 percent.

That's compared with 14 percent for Rep. Allyson Schwartz, his next closest Democratic rival. Polling in the single digits were the two other Democrats, Rob McCord, the state treasurer, and Katie McGinty, an environmental adviser during the Clinton administration. 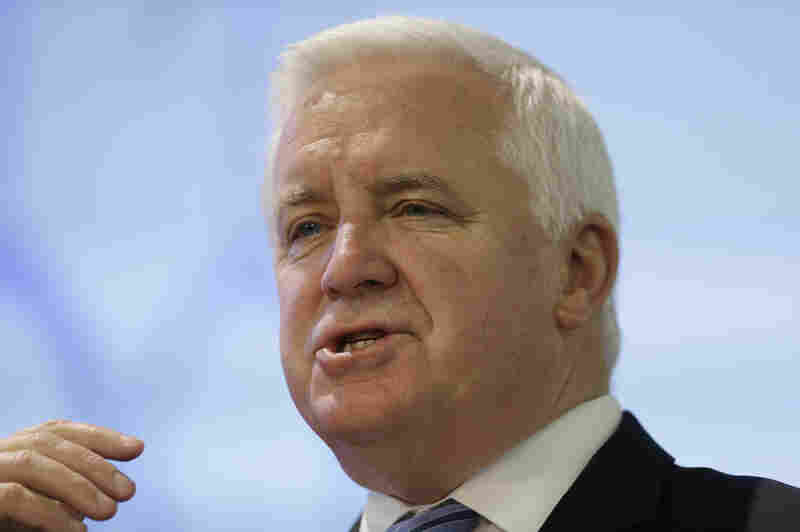 Republican Gov. Tom Corbett is considered one of the most vulnerable incumbents in the nation. Matt Rourke/AP hide caption 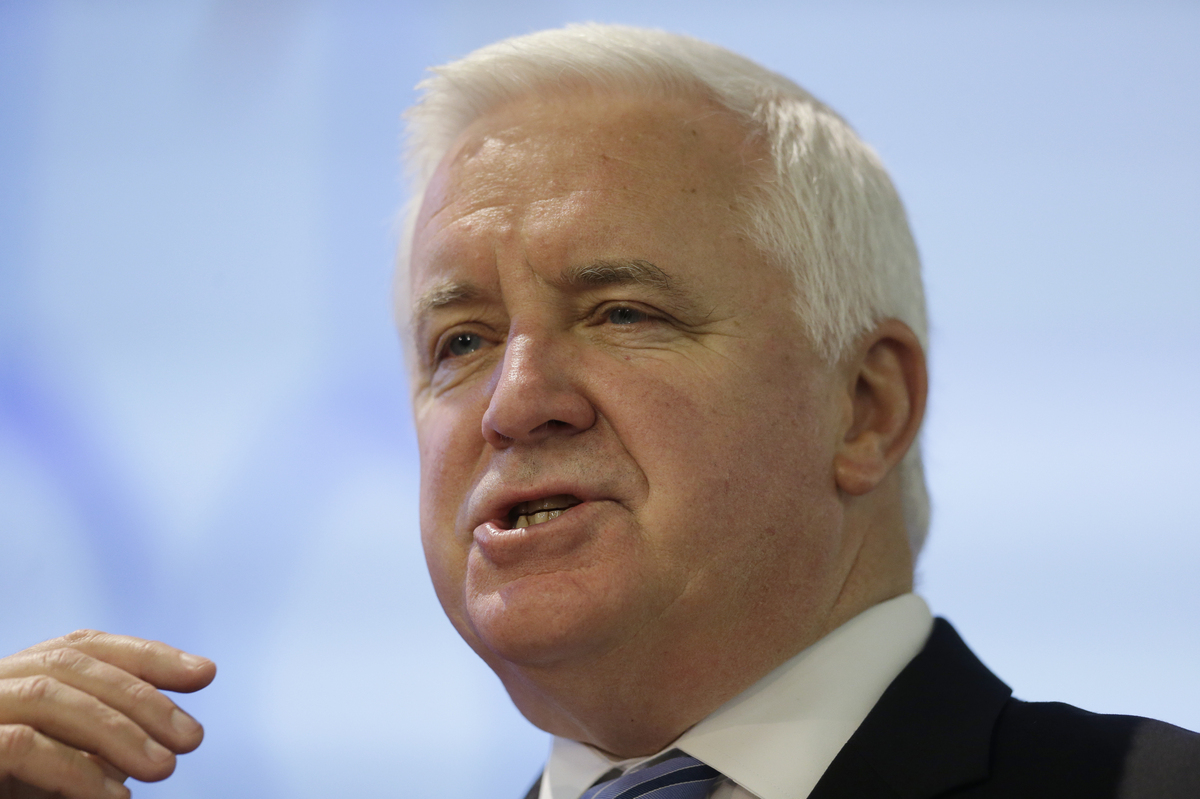 Republican Gov. Tom Corbett is considered one of the most vulnerable incumbents in the nation.

While Wolf, who heads one of the nation's biggest manufacturers of kitchen and bathroom cabinets, has seen his polling lead shrink, he's still in an enviable position for a Democrat, since Corbett is almost invariably identified as the most vulnerable governor in the U.S. in 2014.

Corbett, who served as the state's attorney general before becoming governor, certainly is expecting to face Wolf. The governor's most recent campaign ad is a direct shot at the Democratic front-runner.

Wolf, who had little statewide name recognition when the race started, has spent copiously — most of the $14.5 million he has raised so far, according to the most recent financial reports. Much of that went to TV ads introducing him to voters. His ads featured the classic Jeep he uses as his daily ride.

Which explains why an anti-Wolf ad from Corbett's campaign includes a Jeep with "Wolf" on its license plate stalling out at a stoplight while a comparatively massive Dodge Ram pickup truck with a "Corbett" plate pulls away, a case of "my truck is bigger than yours" machismo.

The ad also jabs Wolf for once being the state's revenue director. In other words, he ran the department that collected the state's taxes. Expect that to be a recurring line from Corbett's campaign.

Corbett's campaign is also attacking Wolf for, well, acting like a capitalist.

It just goes to show how the situation is fairly topsy-turvy in Pennsylvania right about now, with a Republican politician attacking a Democrat for allegedly rapacious business practices that hurt taxpayers and workers — an echo of the strategy used against 2012 GOP presidential nominee Mitt Romney.

Schwartz tried to raise doubts about Wolf among Democrats by practically daring him to embrace the Affordable Care Act as tightly as she did. She also questioned his business hiring and promotion practices when it came to female workers.

Neither tactic worked. In fact, the Franklin and Marshall poll showed Wolf with a slight lead among women.

Meanwhile McCord, who is white and married to a black woman, caused a furor when he suggested that Wolf might be lacking on the racial sensitivity front. McCord criticized the Democratic front-runner for supporting a former York, Pa., mayor, a white man acquitted of involvement in a 1960s racial killing of a black.

The backlash was swift, with the current mayor of York, who is black, and former Democratic Gov. Ed Rendell excoriating McCord and coming to Wolf's defense.

In short, his Democratic rivals' attacks have proved little more than speed bumps as Wolf rides his Jeep right over them toward the nomination.

Corbett's overarching problem is that he appears ideologically out of step with his state, more conservative on balance than most of Pennsylvania's voters.

Corbett also refused to expand Medicaid under the Affordable Care Act unless low-income recipients paid for it, and he presided over huge cuts in state education funding.

Corbett's argument for re-election is that the tax cuts he signed into law helped spur economic growth in the state leading to a lower jobless rate and the creation of 150,000 jobs during his tenure. But if voters give him credit for all that, it's not showing up in his support levels.