Accessibility links
How A Conservative Darling Could Lose His Conservative State : It's All Politics Sam Brownback's reelection as the GOP governor of Kansas might have been a slam dunk, but he's managed to anger enough constituency groups — including some Republicans — that now he faces a real race. 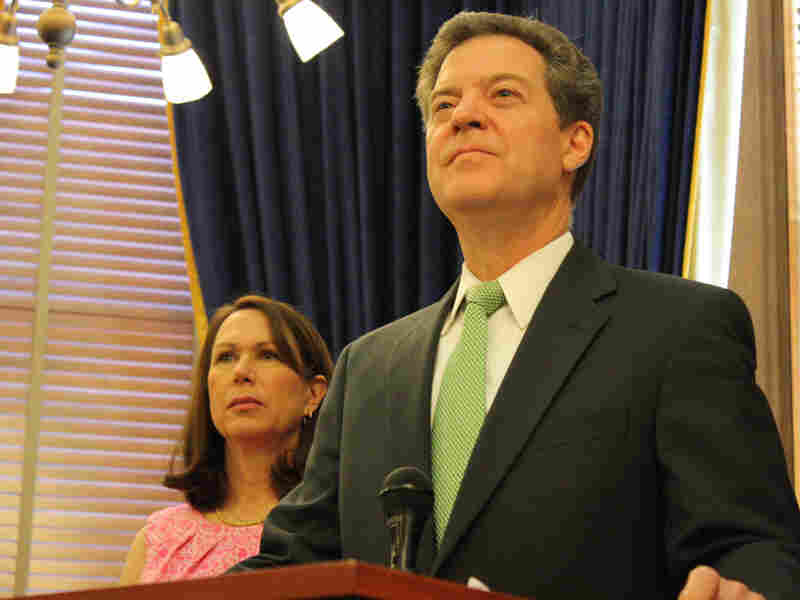 With his wife Mary by his side, Kansas Gov. Sam Brownback addresses supporters before formally filing for reelection on Thursday at the Statehouse in Topeka. Brownback's reelection might have been a slam dunk, but he's managed to anger enough constituency groups that now he faces a real race. John Milburn/AP hide caption 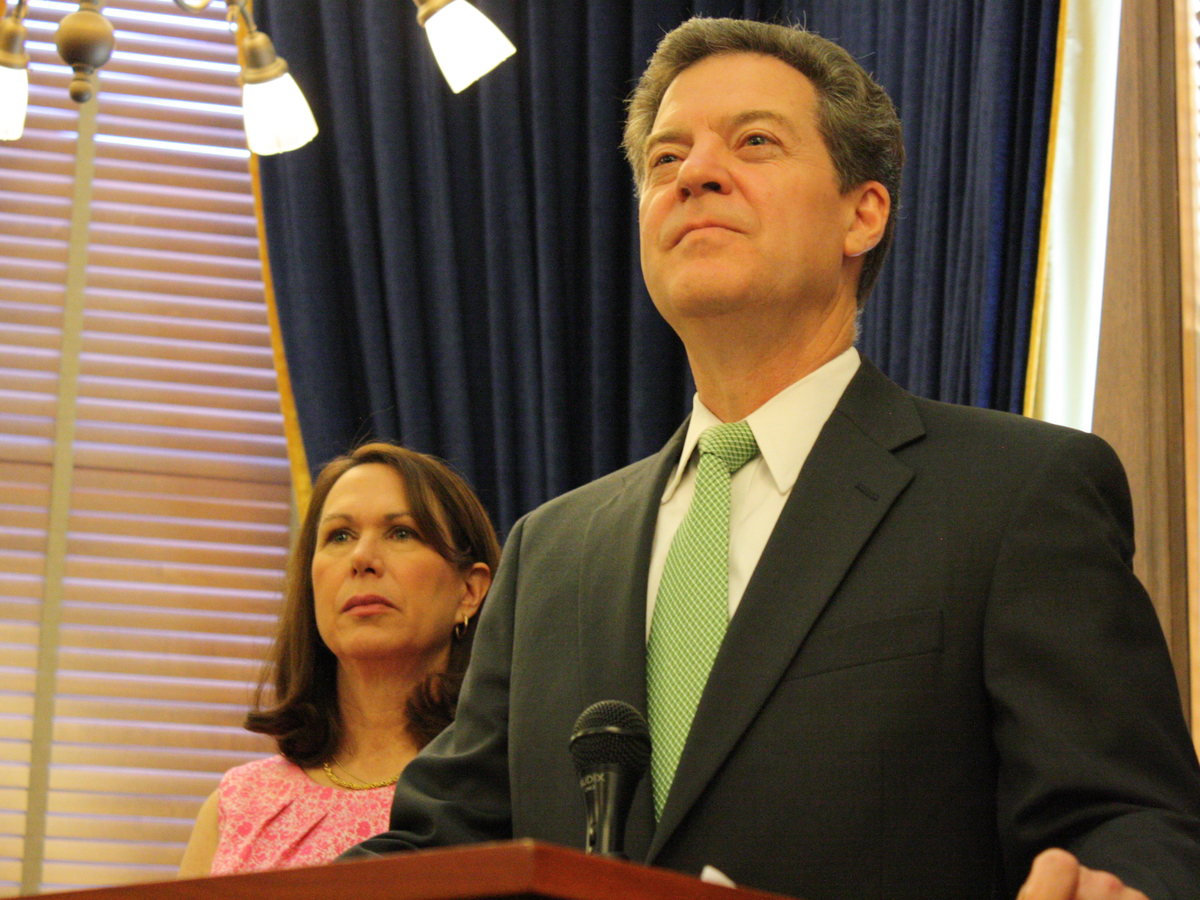 With his wife Mary by his side, Kansas Gov. Sam Brownback addresses supporters before formally filing for reelection on Thursday at the Statehouse in Topeka. Brownback's reelection might have been a slam dunk, but he's managed to anger enough constituency groups that now he faces a real race.

There's been nothing but bad news lately for Gov. Sam Brownback.

The FBI is investigating close associates of the Kansas Republican, including his former chief of staff, for possible lobbying and fundraising improprieties, as well as sweetheart deals involving state business.

Brownback dismisses it as a "smear" campaign. Nothing may come of it, but it's certainly made for some bad press.

Also, the state's bond rating was cut earlier this month amid plunging revenues, lending credibility to his opponents' arguments that his massive tax-cut packages have damaged the state.

"The polls show that he's very vulnerable for somebody who should be overseeing a solidly Republican state," says Mark Desetti, a lobbyist for the Kansas branch of the National Education Association.

The most recent poll, by Rasmussen, shows Brownback leading his Democratic opponent, state House Minority Leader Paul Davis, by 7 points. Davis had led in some earlier surveys and Brownback's own numbers have been consistently below 50 percent, which is always a warning sign for an incumbent.

Despite GOP dominance of the state, Kansas has shown itself willing to elect Democratic governors in recent times — and vote out unpopular Republicans.

"The pendulum has swung so far to the right that it's made a lot of people in Kansas uncomfortable," says Laura Kelly, the Democratic whip in the state Senate. "I think they're going to be anxious to pull it back to the middle."

Brownback And His Enemies

Brownback's tax cuts have not only diminished state revenue but led to cuts in education that even the state Supreme Court has declared unacceptable.

Teachers, who are also angry about recent state legislation stripping them of tenure, are now protesting the governor wherever he appears. It's not a huge surprise that teachers and their union are opposed to a Republican governor, but it does lend the Davis campaign an army of volunteers.

"You can't swing a dead cat without hitting somebody that's pissed off about what he's doing," says Dan Watkins, a former executive director of the Kansas Democratic Party.

What may be most dangerous for Brownback is opposition from fellow Republicans. Kansas has long had, in effect, a three-party system, with moderate and conservative Republicans operating as separate, unfriendly camps.

Until 2012, moderates still controlled the state Senate, but Brownback and his allies targeted and ousted several of them in GOP primaries that year.

That has left a lot of bad feeling among members of the political class. Several prominent Republicans have endorsed Davis, or are about to.

Whether their enmity is widely shared by the voting public is the question that will likely decide the governor's fate.

"Brownback's got his work cut out for him, just trying to convince moderate Republicans, 'Hey, I'm okay — I'm not that guy all these newspapers are telling you about,'" says Ed Flentje, a political scientist at Wichita State University.

Clayton Barker, the executive director of the Kansas GOP, says that the environment for Brownback isn't as favorable this year as in 2010, when he won election with 63 percent of the vote. He also credits Democrats with being better organized this year.

But he notes that the Republican registration advantage in the state is huge and that Brownback, who will not want for money, has barely gotten his campaign underway.

"Some moderates may disagree with some things that Brownback has done, but they won't break with the party," Barker says.

Brownback can make the case that unemployment has dropped on his watch — it fell to 4.8 percent last month. Tax cuts, while maybe not so popular with bond rating agencies, are an easy sell with the public.

And Brownback will do everything he can to tie Davis to President Obama, who is highly unpopular in the state.

"Paul Davis has spent the past five years defending Obama and Obamacare," says Susan Wagle, the Republican president of the state Senate. "I believe once Kansas voters know his record in the House, they'll vote strongly against him and for the governor."

Pinning opponents to Obama is a common GOP strategy, of course — one that Kansas conservatives used even against their fellow Republicans in 2012.

"A great indication of how Brownback and his people are unready for a tough race is when they had a $93 million [budget] shortfall last month and immediately said it was Obama's fault," says Burdett Loomis, a political scientist at the University of Kansas. "Even Republicans found that laughable."

Loomis, who worked for Kathleen Sebelius when she was the Democratic governor of the state, notes that Democrats have been elected governor of Kansas every 12 years since 1966. In three of those cases, they unseated one-term Republican incumbents.

"Republicans in this state lose when Democrats can actually make them personally responsible for one problem or another," Loomis says. "Brownback is in far worse shape than either Robert Bennett or Mike Hayden, the last two Republican governors who lost after one term."

Kansas is a Republican state and this is shaping up to be a Republican year. That's what makes the Brownback story so compelling, says Jeff Roe, a GOP consultant based in Kansas City, Mo.

"It's a man bites dog story — can a Republican lose in Kansas?" he says.

But Roe says once Brownback starts outlining his agenda for a second term and advertising the successes of his first, there's no way a relatively liberal candidate like Davis will be able to beat him, given the state's conservative bent.

"This is going to be a fun race to watch in May and June," Roe says, "and a real boring one to watch in October and November."