Accessibility links
Texas Takes A Hard Right Turn : It's All Politics In most states this year, the Republican establishment has managed to hold off Tea Party challengers. In Texas, the opposite was true. 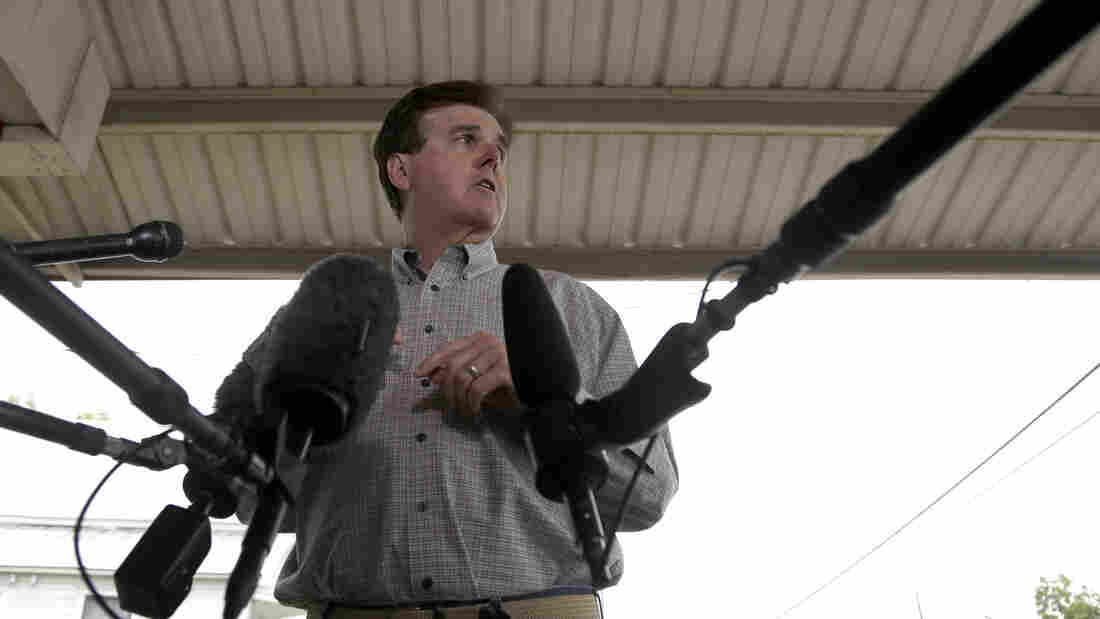 The headline in the Dallas Morning News summed it up nicely: "Tea For Texas."

While the political news around the country has generally been how the Republican establishment has triumphantly held off Tea Party challengers, in Texas Tuesday it was the opposite.

David Dewhurst is a prime example of what happened. For more than a decade, all Lt. Gov. Dewhurst has done is faithfully serve the legislative agenda of one of the most conservative Republican governors in the country, Rick Perry.

The problem for Dewhurst is hiding in the sentence above — serve for more than a decade. By successfully participating in a legislative body, even a body dominated by conservative Republicans, Dewhurst earned his bona fides as an establishment Republican leader. And for Tea Party Republicans, that means one thing: You're not a real conservative.

Dewhurst negotiated and sometimes compromised with Texas Democrats on his way to passing his conservative agenda. The truth is Dewhurst didn't have to compromise very much because the Democratic Party in Texas is about as large and powerful as a Honda Fit. But governing successfully can be an indictment on the right — and for the lieutenant governor it was absolutely.

Worth hundreds of millions of dollars, Dewhurst was nevertheless crushed by 30 points by Dan Patrick, a millionaire conservative talk radio host from Houston turned state senator.

Texas Tea Party Republicans want two things: They want to get a lot tougher with illegal immigrants — seal the border and end in-state tuition for the children of illegal immigrants. And they want to take a machete to the state budget. And this is where it's going to start to get ugly in Texas.

The Lone Star State is growing like nearly every other state in the country wished it could grow — 3 of the nation's 5 fastest-growing cities are in Texas. The state must build infrastructure, roads, schools, parks, libraries and billions of dollars worth of new water projects. It's getting so bad Wichita Falls is about to treat and drink its own sewage water. Dozens of water districts are running out completely.

The state's Republican leadership, backed by Texas' powerful business community, wants — no, needs — the state to spend a lot more money to keep pace with this growth. Otherwise Texas is going to choke to death on traffic and dusty reservoirs. But the right wing of the GOP has little interest in playing ball. In legislative committee negotiations, newly elected Texas Tea Party politicians shrug their shoulders at their Republican colleagues and say they're sorry but they promised the folks back home they weren't going to spend another dime — on roads or water or education or anything else.

And on Tuesday, this wing of the state Republican Party took a big step forward. For their part, Texas Democrats were hoping the insurgent conservatives would indeed get elected believing there actually could be such a thing, even in Texas, as too conservative.

But they might be careful what they wish for. Someday the Texas Democratic Party will rise again, but that day is not today. Tune in again perhaps in 2020 and see how Hispanic turnout efforts are coming along. But for the past 20 years, having an "R" beside your name on the ballot has been enough to win in Texas.

If they beat their Democratic challengers in November as expected, Tea Party Republicans may have the numbers and power to truly lock horns with the state's established and well-financed business interests. For the past four years Tea Partiers have been frustrated by the business elite's control of the Republican leadership in the House and Senate. They gritted their teeth in fury as their bills, viewed as too extreme or detrimental to business, were set aside to die before ever reaching the floor for a vote.

In a post-election statement, Texas House Speaker Joe Straus vowed to hold the Republican establishment line against Tea Party influence, writing the House would "continue its constructive approach to the state's challenges, because that approach is working."

But as the current lieutenant governor — who also serves as the powerful leader of the Texas Senate — rides off slowly into the sunset accompanied by several of his most valuable deputies, it looks like there may be a new sheriff in town.