Accessibility links
Move Over Benghazi; Here Comes Bergdahl : It's All Politics The controversy over the exchange of a U.S. soldier for five senior Taliban fighters at Guantanamo Bay could rival or even surpass Benghazi. 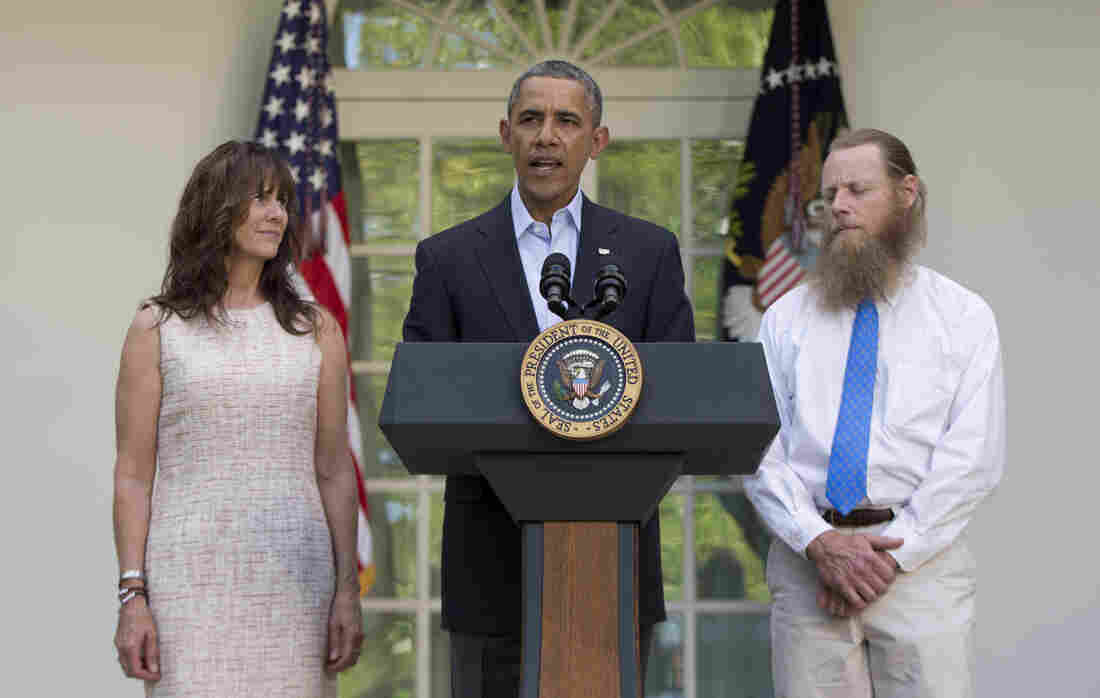 Bob and Jani Bergdahl, the parents of freed American soldier Bowe Bergdahl, with President Obama at the White House on Saturday. The controversy over Bergdahl's release could cast a long shadow over the administration. Carolyn Kaster/AP hide caption 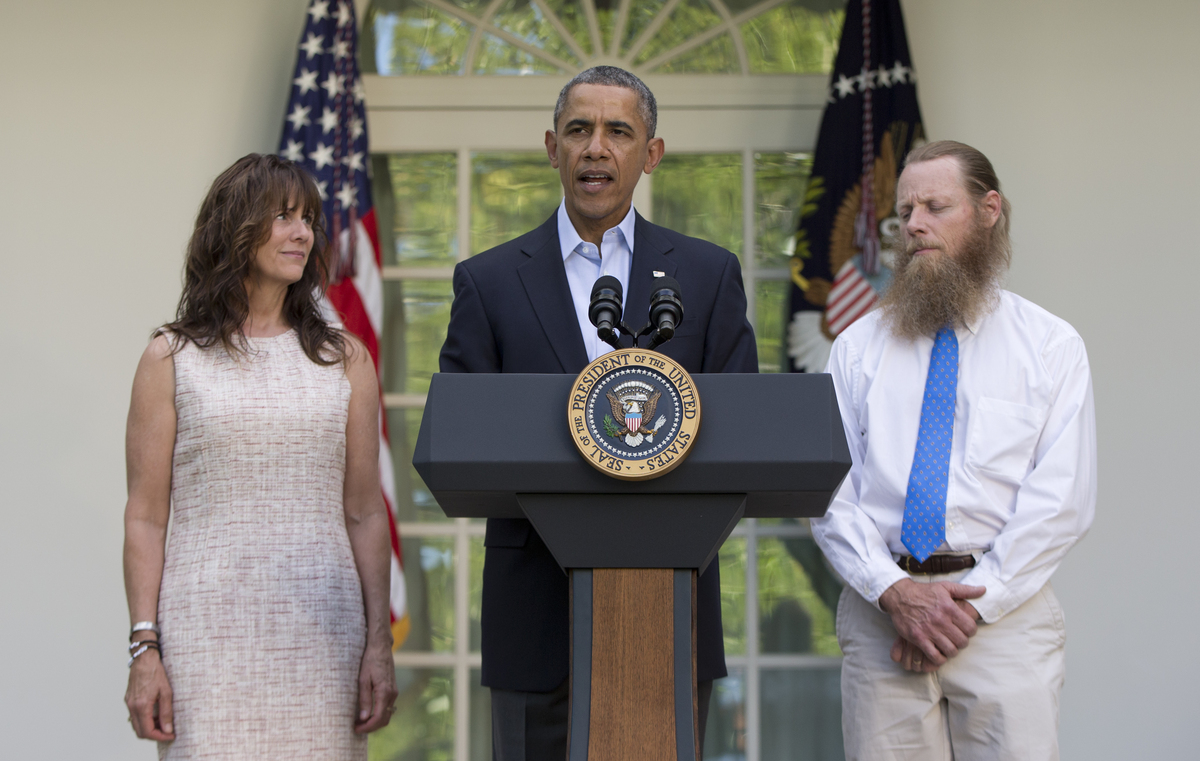 Bob and Jani Bergdahl, the parents of freed American soldier Bowe Bergdahl, with President Obama at the White House on Saturday. The controversy over Bergdahl's release could cast a long shadow over the administration.

Just when it seemed like the outrage on the political right over Benghazi had subsided to the point where only the announcement of House hearings put it back in the headlines, the exchange of captive U.S. soldier Bowe Bergdahl for five senior Taliban fighters at Guantanamo Bay came along.

Now President Obama finds himself amid another foreign policy and national security controversy with fresh legs that even features Susan Rice — the White House official who played a prominent early role in the Benghazi controversy — making an encore.

While it's still too soon to know whether the trade for Bergdahl will have the staying power of Benghazi — where four Americans, including the U.S. ambassador, were killed during a September 2012 attack on U.S. facilities in Libya — there are ominous signs for the administration of what may come.

Some progressives are accusing Republicans of trying to make the Bergdahl controversy into a "new Benghazi." But in some ways, the Bergdahl story has the potential to cast an even longer shadow over the remainder of the Obama presidency.

For one, there's the issue of whether Obama broke the law by not giving Congress 30 days' notice that he was moving detainees out of Guantanamo, something even some progressives say Obama did. That sets up a balance-of-powers clash with Congress unlikely to be quickly resolved. And it fits into the Republican narrative that Obama is willing to run roughshod over the law and Constitution when it suits his purposes.

Then there's the lingering question of the five Taliban fighters released in the Bergdahl exchange and whether they will one day re-emerge to threaten Americans. "These five individuals are not low-level, run-of-the-mill fighter-type terrorists," Georgia Sen. Saxby Chambliss, the top Republican on the Senate Intelligence Committee, told reporters on Tuesday. "These are the guys that raise the money, that made the plans to develop the IEDs, and in some cases are accused of inciting riots that wound up killing not hundreds but maybe even thousands of people, including Americans. ..."

"The president needs to look the American people in the eye and explain to the American people why he was justified in releasing the five individuals, and why their background didn't demand and mandate that they be detained at Guantanamo for an indefinite period of time," Chambliss said.

Add to that the controversy over Bergdahl's service record. Was he a soldier who "served his country with honor and distinction," as National Security Adviser Susan Rice said on the Sunday morning news shows? Or was he a deserter who, according to veterans of his unit, was responsible for the deaths and injuries of soldiers on search-and-rescue missions for him?

So far, the controversy mostly breaks down along traditional partisan lines, a point made by the National Journal's Ron Fournier. While some conservatives are going as far as calling for Obama's impeachment, progressives are generally ridiculing such calls and supporting the administration.

To that degree, the Bergdahl controversy is shaping up like Benghazi, which has been a strictly partisan affair through and through. It even began with Rice on Sunday news programs, this time strongly defending Bergdahl's service record. And that was before the military finished its own investigation.

It was her erroneous 2012 talking points, blaming the attacks in Libya on spontaneous protests to a film defaming Islam, that raised suspicions of a White House cover-up among Obama's most ardent opponents. Rice being out front in the White House's Bergdahl messaging was sure to trigger conservative alarms, and she did.

Worth noting is that the president didn't repeat Rice's language when he was asked during his European trip about accusations that Bergdahl was a deserter.

"But let me just make a very simple point here, and that is regardless of the circumstances, whatever those circumstances may turn out to be, we still get an American soldier back if he's held in captivity. Period. Full stop. We don't condition that. And that's what every mom and dad who sees a son or daughter sent over into war theater should expect from not just their commander in chief, but the United States of America."

That some military members are among some of the strongest critics of the trade that got Bergdahl released suggests just how difficult this issue could prove to be for the president going forward.