Accessibility links
Cochran, McDaniel Neck And Neck In Mississippi Senate Primary : It's All Politics Veteran GOP Sen. Thad Cochran is in danger of losing his bid for re-nomination to a seventh term against Tea Party-backed challenger Chris McDaniel. 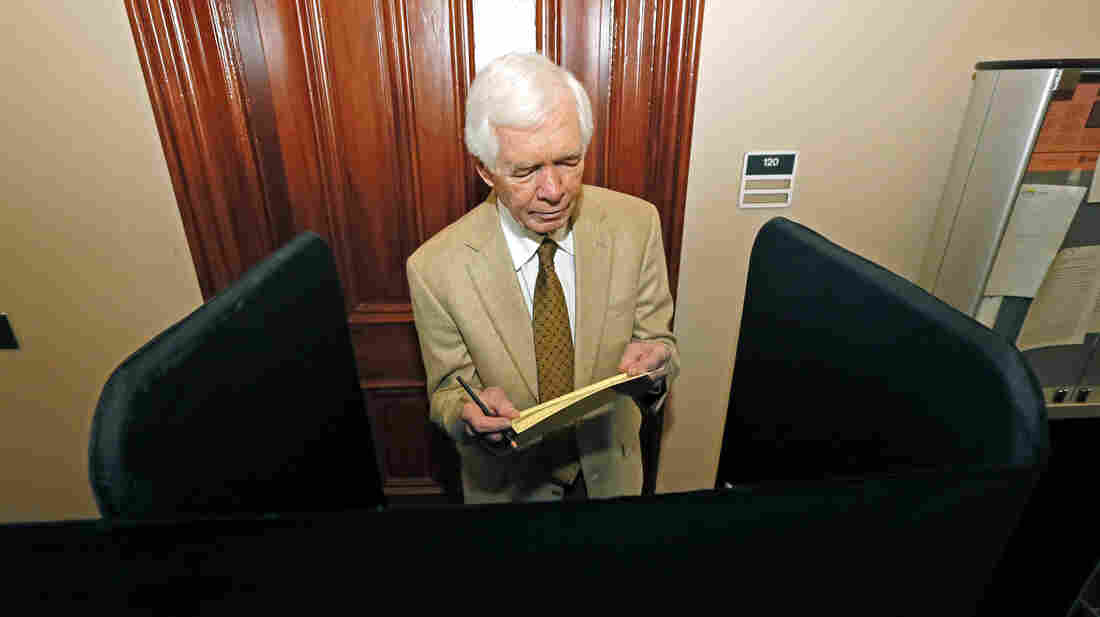 Sen. Thad Cochran, R-Miss., reads over the ballot in a privacy booth prior to voting absentee in Oxford, Miss., on Saturday. Rogelio V. Solis/AP hide caption 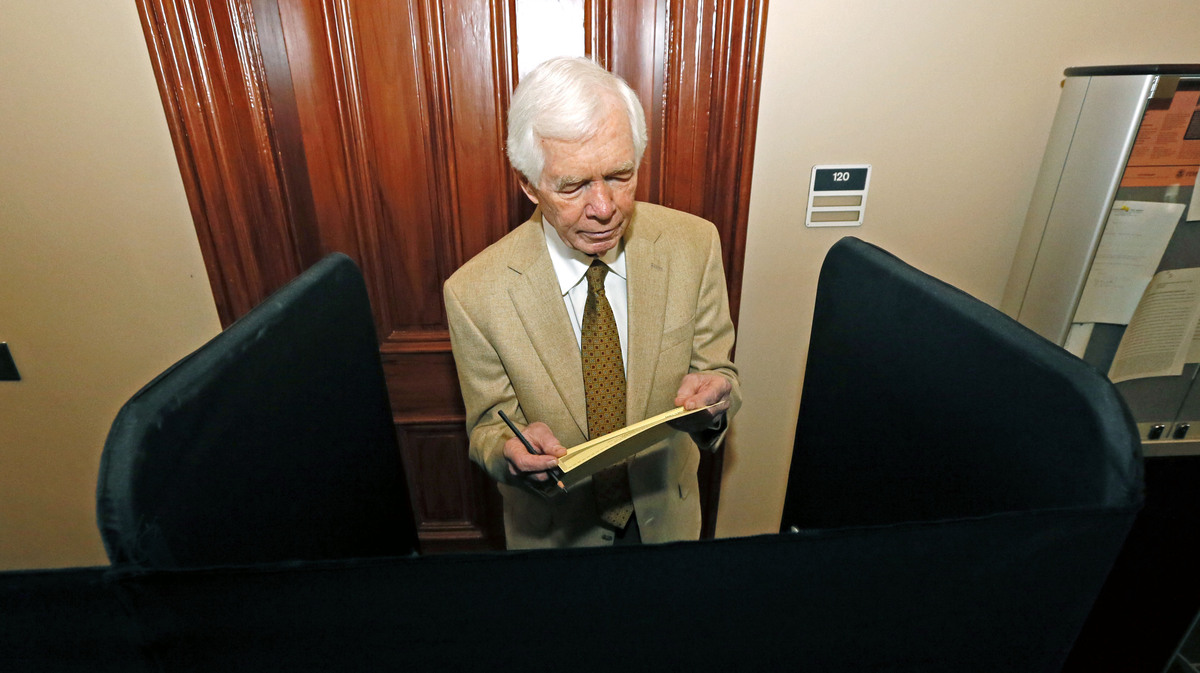 Sen. Thad Cochran, R-Miss., reads over the ballot in a privacy booth prior to voting absentee in Oxford, Miss., on Saturday.

In the latest test of GOP establishment strength against a vigorous Tea Party challenge, McDaniel led the six-term incumbent by less than a percentage point, 49.6 percent to 48.8 percent, with 98 percent of the vote in. A little known third candidate had less than 2 percent.

If no candidate wins 50 percent of the vote, the GOP nomination fight moves to a June 24 runoff.

The Mississippi Senate contest figured to be the Tea Party's last, best chance to take down an incumbent this year. Sarah Palin and Rick Santorum both campaigned for McDaniel; conservative groups including FreedomWorks, the Club for Growth and the Senate Conservatives Fund poured in more than $5 million in outside spending.

Cochran, meanwhile, had a wall of national and state GOP support behind him and financial backing from groups ranging from the U.S. Chamber of Commerce to the National Rifle Association.

But the race took a bizarre turn in late May after the arrests of a local blogger and several McDaniel supporters in a scheme to exploit Cochran's bedridden wife. Police said the men conspired to photograph 72-year-old Rose Cochran, who suffers from progressive dementia, in the Mississippi nursing home where she has lived since 2000.

The scandal dominated local headlines and put McDaniel — who insisted his campaign had no involvement in the scheme — on the defensive. The tone grew nasty, with McDaniel asserting that the 76-year-old Cochran — whose mild-mannered and courtly style had earned him the nickname "Gentleman Thad" — was no gentleman at all.

The unfavorable publicity failed to put much of a dent in McDaniel's campaign. Several recent polls reported the race remained tight.

For the GOP, the stakes in a prospective June 24 runoff are high: Even in a conservative state like Mississippi, there are fears among Republicans that the defeat of the popular Cochran could create an opening for the Democratic nominee, former U.S. Rep. Travis Childers, to be competitive this fall.

With Cochran as the nominee, the thinking goes, Democrats have little hope of picking up the seat. Since first winning the Senate seat in 1978, the longtime senator has won re-election with not less than 61 percent of the vote.

But Cochran would be precariously positioned in a low-turnout runoff, where McDaniel's energized Tea Party supporters would be more likely to turn out.

In Iowa, where Republicans chose a Senate nominee for the seat left vacant by retiring Democratic Sen. Tom Harkin, there was less drama: state Sen. Joni Ernst won the nomination to take on Democratic U.S. Rep. Bruce Braley, who was unopposed.

Ernst broke out of a crowded GOP field with the help of some eye-catching ads — including one in which she talked about castrating hogs in her youth. With 99 percent of the vote in, she easily outdistanced her four opponents with 56 percent — well over the 35 percent threshold necessary to avoid having to contest the nomination at a state party convention.

In California, Democratic Gov. Jerry Brown also finished well ahead of the crowded field in the state's top-two primary system, where all candidates — regardless of party — are pitted against each other, with the top two finishers moving on to the November ballot.

California Democratic Rep. Mike Honda also cruised to a first-place finish in the Silicon Valley-based 17th District, winning 51 percent of the vote. In November, Honda will face Ro Khanna, a former Obama administration official, in a race where Khanna and Honda have already spent nearly $4 million.