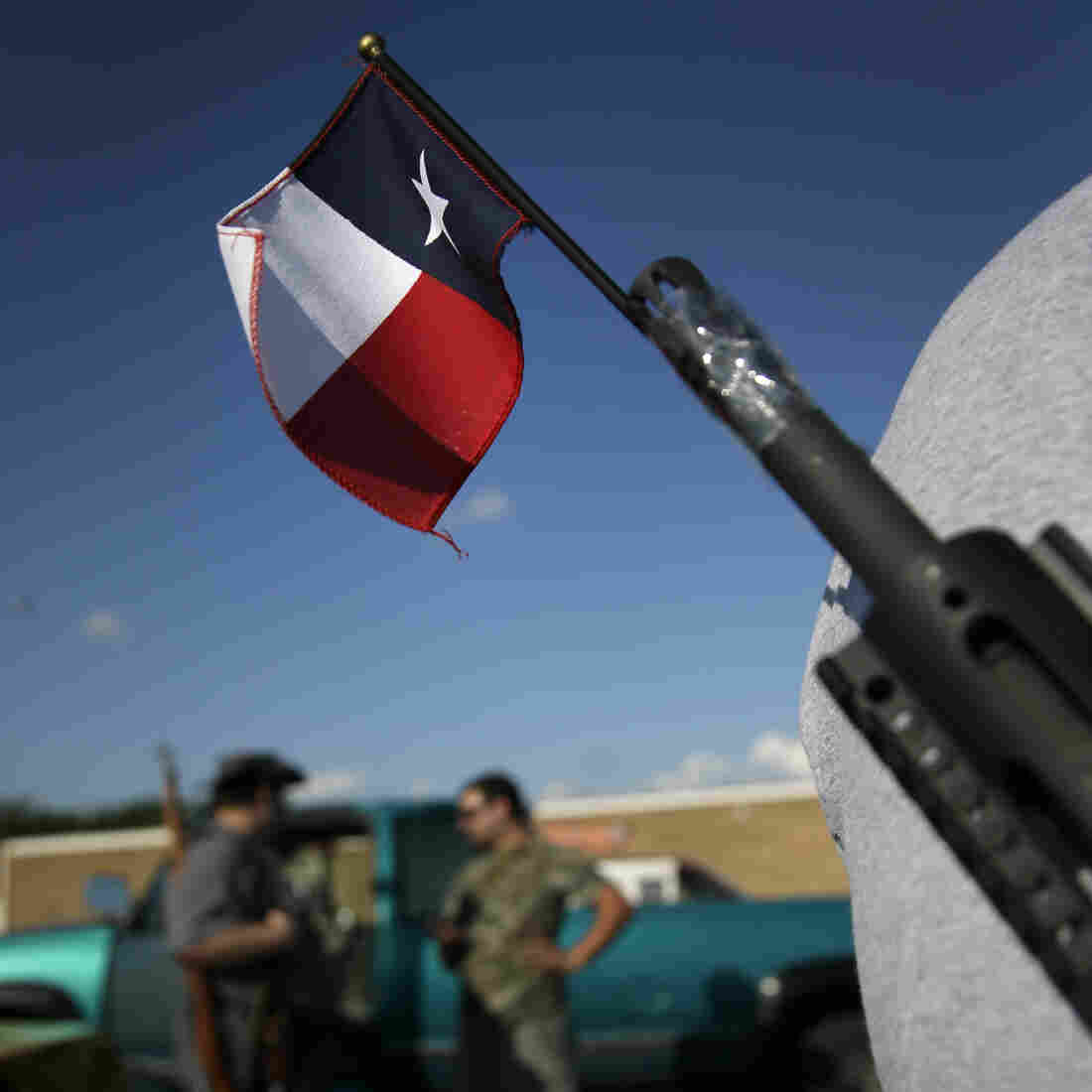 A Texas flag sticks out of the barrel of a rifle belonging to Robert Perez, as he and others with the group Open Carry Tarrant County gathered for a May 29 demonstration in Haltom City, Texas. Tony Gutierrez/AP hide caption 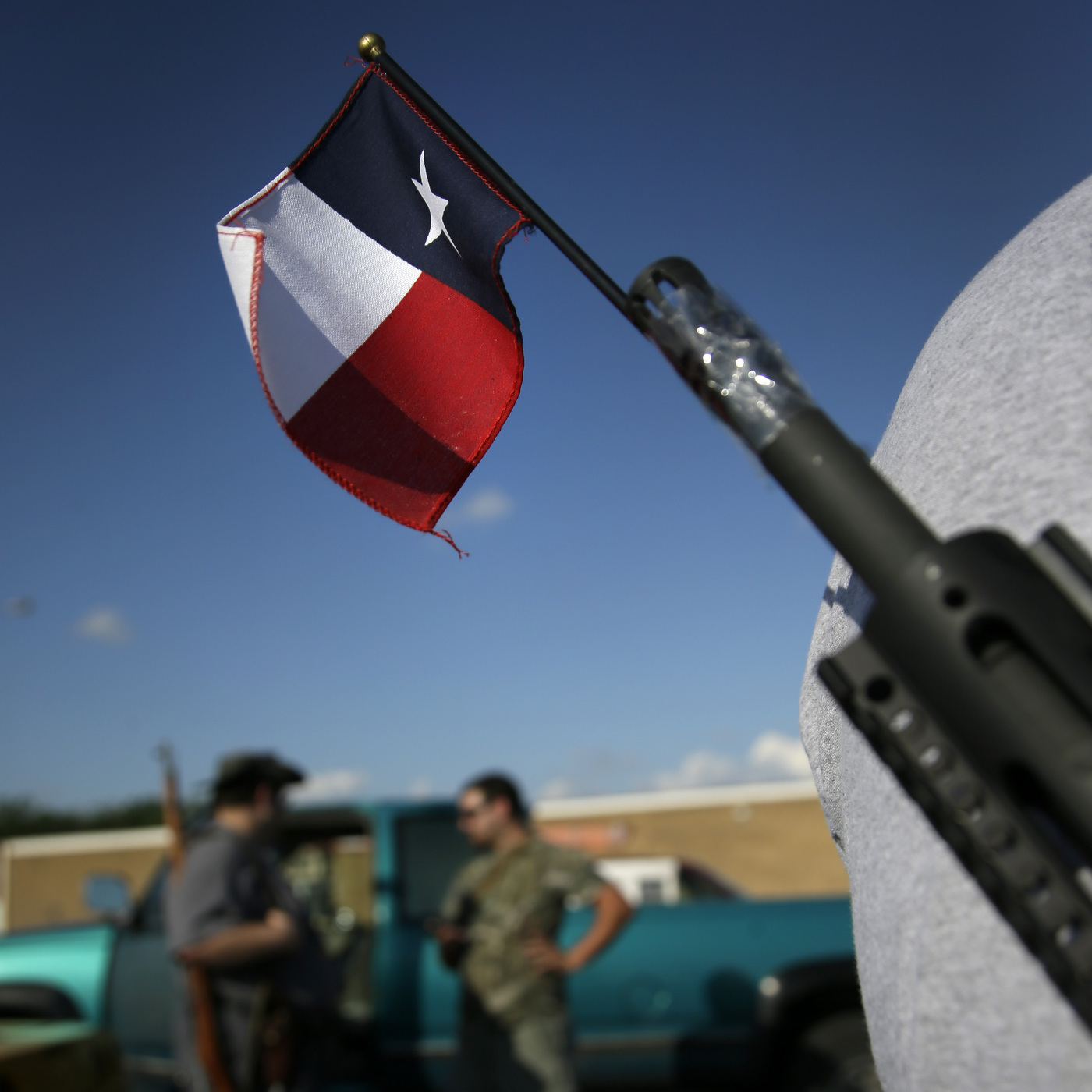 A Texas flag sticks out of the barrel of a rifle belonging to Robert Perez, as he and others with the group Open Carry Tarrant County gathered for a May 29 demonstration in Haltom City, Texas.

Last week, not long after a lone gunman's rampage in California, Texas witnessed an unnerving series of demonstrations.

Groups of young men, armed with tactical long rifles slung across their backs, began showing up at restaurants like Chili's and Chipotle, Sonic and Jack in the Box, to mention a few, as part of their response to another anguished gun control conversation.

The fast-food-while-heavily-armed political protests — "You want some chili fries with your AK-47?" — didn't go well. These men — in their 20s, dressed in T-shirts, jeans and camouflage, and carrying assault rifles — sounded more than a bit immature in a YouTube video they made.

Despite their wan humor in the restaurants' entryways, there is tension from the moment the eight men arrive. A nervous young manager confronts them and denies them entry as long as they're armed.

At one point, a female customer approaches them and says, "There are children here. You're a dumbass."

Surprised, one of the young men responds weakly, "Yeah, I'm a dumbass."

Only after the woman turns her back to him, as she angrily walks away, does he crack wise that she must be with Moms Demand Action, a gun control group.

As the protesters, sans food, lug their rifles back to their cars in the parking lot, one of the young men giggles to the camera that he feels like he's being disciplined by his mom. The whole exercise turns out to be humiliating — nothing like the powerful expression of liberty they'd had in mind.

By posting the painfully awkward video for all to see, they left little doubt as to just how politically lost they are.

The young men had picked those North Texas restaurants because they perceived them to be gun friendly, which they were. But it's a matter of degree.

Brinker International is not going to let gun enthusiasts hump in a lot of heavy artillery and scare their Chili's customer base away — which, in the age of American mass murder, it does.

After the armed protests, Chili's and Sonic quickly issued statements that they no longer welcome openly armed customers. Four other national chains joined them.

The city of Arlington reacted by changing municipal ordinances to make it more difficult for anyone carrying rifles to approach drivers on the road and distribute pocket-sized copies of the Constitution. Not only was it scaring the motoring public, it seemed an invitation to an unintended gun battle by way of misunderstanding. This is Texas, after all; it's not just the guys with rifles who are packing.

The backlash became so potent even the NRA joined in.

"Now we love AR-15s and AKs as much as anybody," the NRA wrote in a press release before calling the "dubious" protest "weird," "downright scary" and "counterproductive."

"That's not the Texas way," the May 30 missive concludes.

But the group Open Carry Texas stood its ground. They accused the NRA of acting more like Moms Demand Action than stalwart defenders of the Second Amendment. And the NRA quickly backed down, explaining that the criticism "was a mistake" made by a staffer who was giving his "personal opinion." Chalk one up for the rifle men from Texas.

The open carry movement called on all their supporters to bring their rifles with them to the Texas Republican Party Convention at the Fort Worth Convention Center this week. Fort Worth didn't like that, and announced that citizens could walk around on the sidewalk outside the convention center with their long guns, but they weren't bringing them inside where alcohol is served.

Moms Demand Action also zeroed in on the retailer Target this week after finding photos of Open Carry Texas members shopping for baby merchandise in a North Texas store. They demanded the national chain ban open carry in their stores. Target has not responded.

Of all the battles gun advocates have won over the past two decades, this will be the hardest. Groups of roving young men with assault rifles slung over their shoulders frightens the American public. Even in Texas.