Accessibility links
Explaining The Bergdahl Swap Hasn't Been Obama's Finest Hour : It's All Politics Some aspects of how Obama and his team told the world about the trade for Sgt. Bowe Bergdahl have raised eyebrows, even among congressional allies, prompting questions like: What were they thinking? 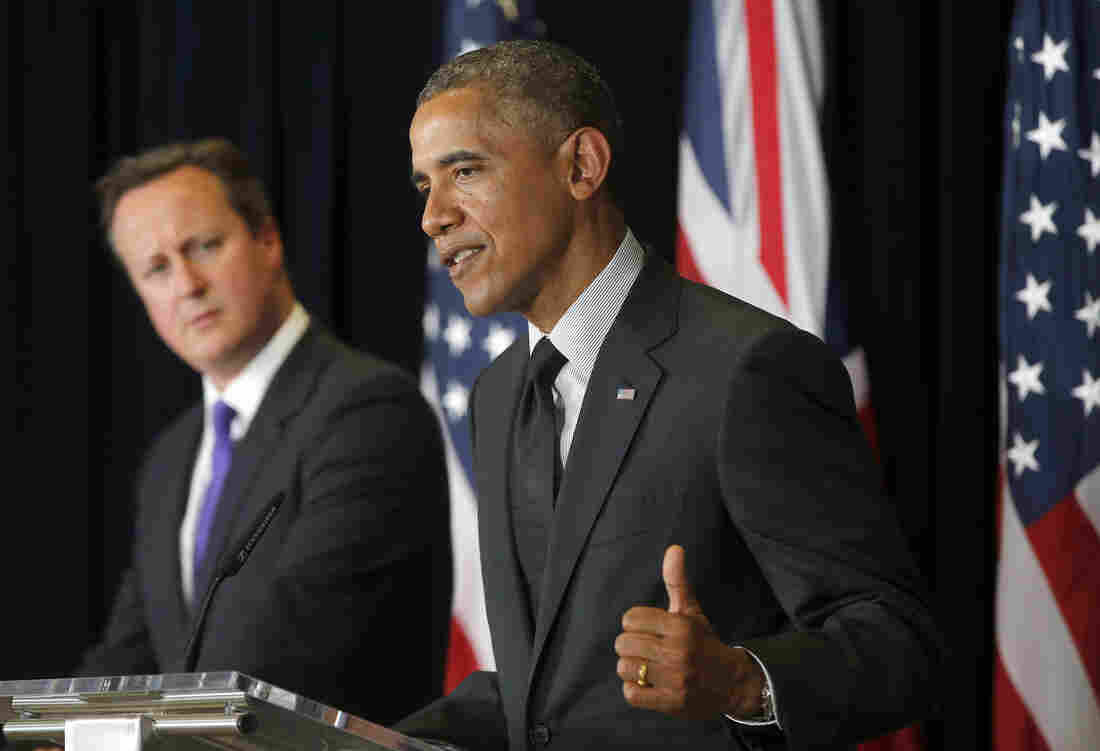 President Obama at the news conference in Brussels at which he was asked if he had second thoughts about how he and his aides handled the Bergdahl deal announcement. British Prime Minister David Cameron is in the background. Charles Dharapak/AP hide caption 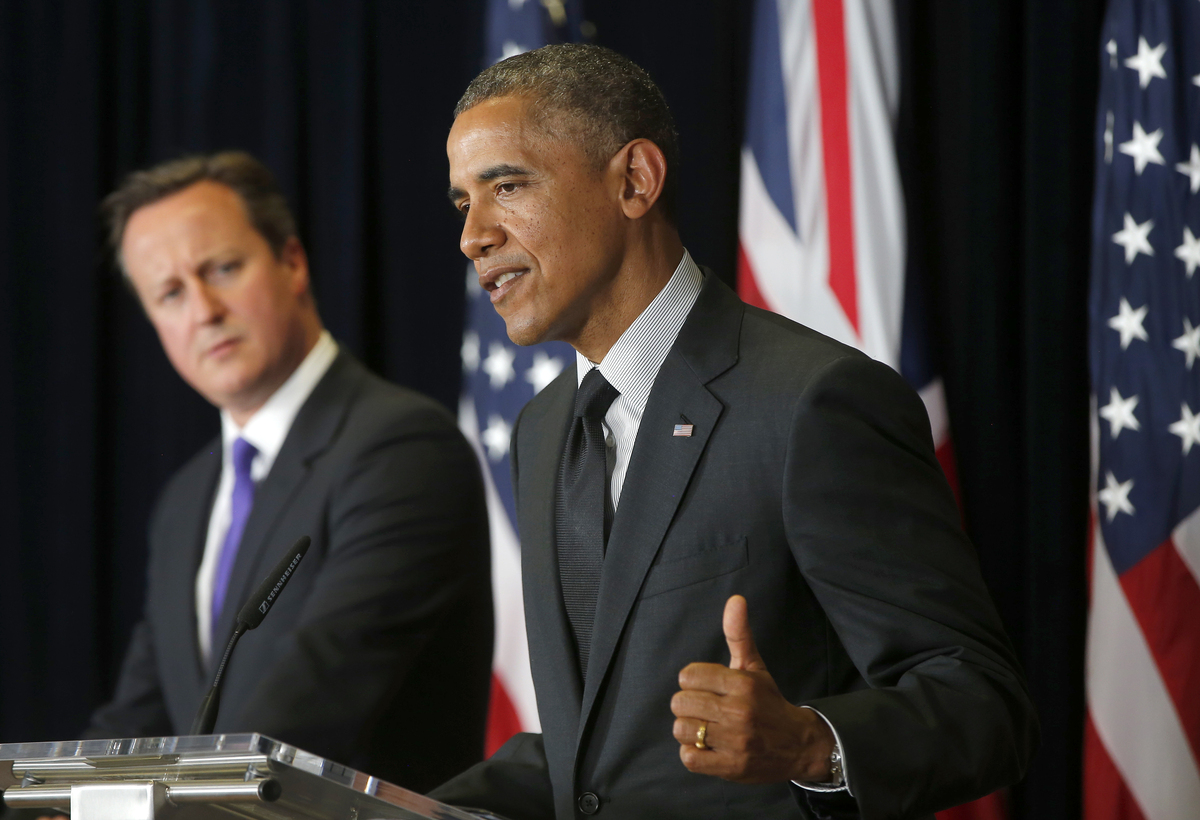 President Obama at the news conference in Brussels at which he was asked if he had second thoughts about how he and his aides handled the Bergdahl deal announcement. British Prime Minister David Cameron is in the background.

While White House officials are keeping a brave face, President Obama and his top aides obviously have a political firestorm on their hands, owing not only to the particular details of the prisoner exchange involving Sgt. Bowe Bergdahl and five senior Taliban officials but how they informed Congress and the public.

Not that the president is yet willing to admit that publicly.

During Obama's European trip on Thursday, a journalist asked him if "in retrospect, do you think you could have done more to confer with Congress or announced the deal in a way that might have spared [Bergdahl] and his family being caught up in the political crossfire?"

The president didn't really say what he and his aides might have done differently. Instead, he said: "We had a prisoner of war whose health had deteriorated and we were deeply concerned about. And we saw an opportunity and we seized it. And I make no apologies for that."

There was nothing in the president's answer suggesting that he thought he and his team could have done a better job handling what has indisputably become an election-year mess.

But some aspects of how Obama and his team told the world about the Bergdahl trade have raised eyebrows, even among congressional allies, prompting questions like: What were they thinking? And that's without even going into the national security substance of releasing top Taliban officials.

"They've done a pretty poor job," says James Thurber, director of the Center for Congressional and Presidential Studies at American University. "It just seems like error after error after error. In a communications strategy, you've got to anticipate who's going to criticize you and why and have some strong arguments for it and they didn't even have that."

What makes this even more surprising is this is a presidency in its sixth year, not its first.

Here are just three ways the administration has hurt its case.

The Rose Garden: Obama's appearance with the parents on Saturday quickly became problematic, to put it mildly. By standing with the Bergdahls at the White House, Obama wrapped the freed soldier and his parents in the presidency's prestige.

Unfortunately, given the dubious circumstances of the sergeant's disappearance, that quickly raised questions in many minds about what White House officials were thinking. That Bob Bergdahl, the soldier's father, spoke some words in Pashto, the language of his son's captors, only added to the head-scratching.

It turns out, there was an element of serendipity to the Bergdahls' winding up in the Rose Garden. They had been in touch with White House officials over the years and were in Washington for the Memorial Day weekend. The deal that resulted in their son's release came together while they were still in town. It was Obama's personal decision to have them at the White House event, which may tell us everything we need to know. When a president wants his staff to make something happen, they tend to get it done though it might not be the wisest course.

Susan Rice: The problems here can be summed up in six words: "Benghazi talking points ... honor and distinction." The national security adviser, who for conservatives became the face of an alleged administration coverup of the facts behind the 2012 attacks in Libya, is in a familiar tight spot. Her credibility was widely questioned again because of her claim, again on a Sunday news show, that Bergdahl served honorably despite White House officials' awareness that members of Bergdahl's unit were saying otherwise. Given that, how could she make that claim and leave the impression of an Obama White House disconnected from reality?

Shifting rationales: Obama and White House officials have given various explanations for why they felt forced to move so quickly to trade Bergdahl for the five Taliban prisoners at Guantanamo Bay without first telling Congress as required by law. They were afraid of a leak that could harm the deal. Bergdahl's health was rapidly deteriorating. They had made Congress aware of negotiations taking place as far back as 2011.

Little of that was cutting it with the president's allies on Capitol Hill, let alone his Republican opponents. Sen. Dianne Feinstein, D-Calif., for instance, the chairwoman of the Senate Intelligence Committee, wasn't buying the excuses that Congress was notified early in the process or that there wasn't enough time to tell key members right before the deal was announced.

In an interview with the Los Angeles Times, she said: "I think that they expected everybody just to fall in line. A lot could have been avoided had we been called and advised and talked with."

How badly has the administration damaged itself? "On the Bergdahl thing, it's going to be very hard to recover," Thurber said. "It's going to be hard to build trust with Feinstein and [Michigan Democrat Sen. Carl] Levin and other people he needs to be close to on the Senate side."

If there's some other part of the deal with the Taliban that only Obama knows about, and that Americans will eventually learn of, that serves the nation's security interests, that could help, Thurber said.

"But it's going to be very hard, especially just before an election; it's pretty tough," he said. "There are a lot of Democrats in the Senate who are going to run away from this. And from him."