Accessibility links
Eric Cantor's Collapse: What Happened? : It's All Politics In some ways, the House majority leader is the most significant Republican incumbent ousted in a primary since the intraparty rebellion by conservative hardliners began five years ago. 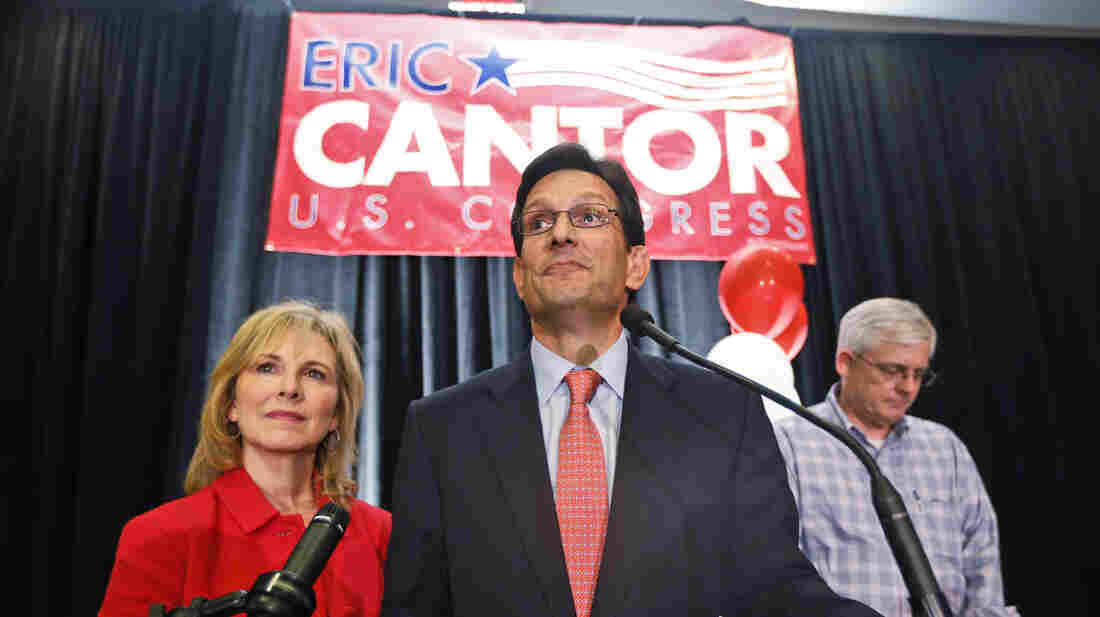 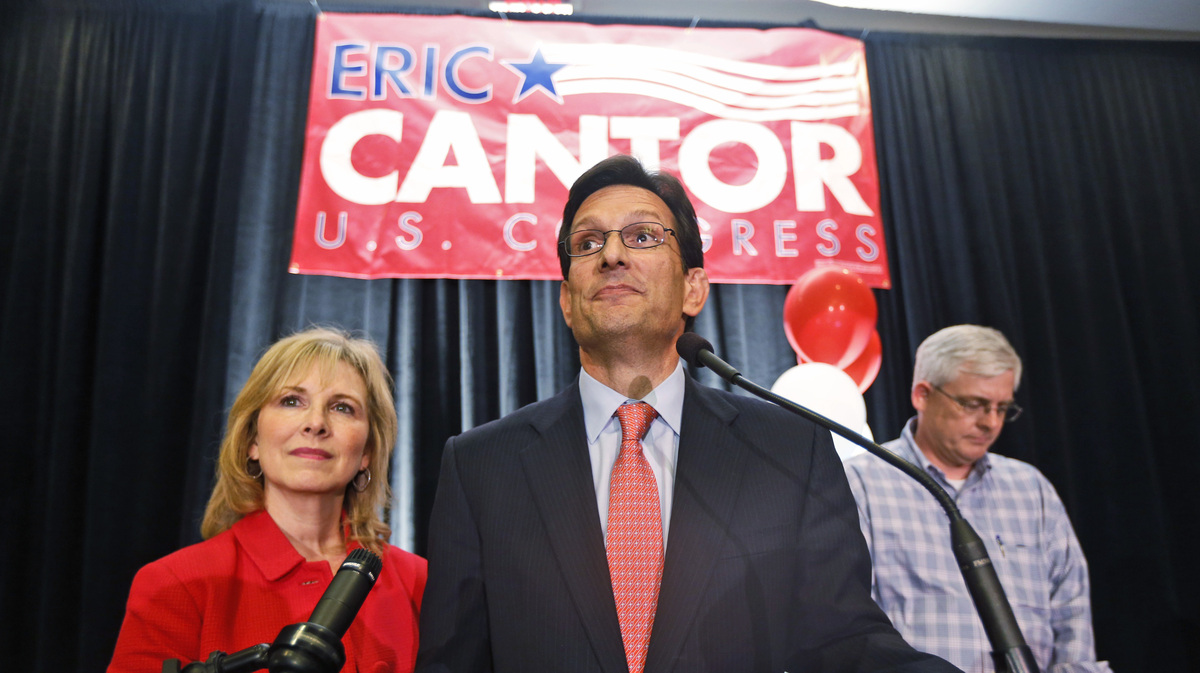 That shape-shifting spirit we call the Tea Party assumed yet a new form Tuesday and took down its most prominent victim of this year, House Majority Leader Eric Cantor. In some ways, Cantor is the most significant Republican incumbent ousted in a primary since the latest intraparty rebellion by conservative hard-liners began five years ago.

No, Cantor is not an iconic senator like Richard Lugar of Indiana, or a popular statewide figure like Mike Castle of Delaware, both of whom had their careers cut short by insurgents from the right in recent primaries.

But Cantor was widely expected to succeed John Boehner as speaker, quite possibly at the end of this year. That's a big deal. Speakers not only run half of Congress — they stand next in line to be president after the vice president. Cantor's loss makes him the first majority leader to lose renomination since the office was created in 1899, according to the University of Minnesota's Smart Politics blog.

Voters in November have not always been kind to Senate party leaders, or to senators in line for that job. Tom Daschle of South Dakota was defeated while the Democratic Senate leader in 2004; Tennessee's Jim Sasser went down when in line for that job in 1994. That was also the year Speaker Tom Foley of Washington state was beaten by an upstart Republican, becoming the first sitting speaker defeated since the Civil War.

But in primaries, as a rule, the people in the top party jobs are unassailable. They are considered the standard-bearers, the field generals, for their national organizations. But the current turmoil in the country's most conservative districts and states is different. It is not deterred by talk of lost power, prestige or pork. In fact, the rebellion springs from rejection of the value system that strives for power, prestige and pork. And the rebels are turning out in sufficient numbers to eclipse the more conventional GOP primary voters.

That is clearly what Sen. Thad Cochran of Mississippi did not understand in his GOP primary a week ago, and it is a major reason the six-term veteran and appropriations legend is expected to lose in his runoff on June 24.

So why did Cantor lose? And why didn't we see it coming? And who will be speaker after Boehner now?

Many will say Cantor lost to the Tea Party, however they define or understand that boisterous-if-amorphous entity. But Cantor lost because he lost touch with his Virginia district. Yes, he risked an uprising on his right specifically by saying conciliatory things about an immigration bill and about finding ways to broaden the base of the party among working-class voters — including minorities. But the reason opponents could redefine him in the eyes of his own folks back home was that he had too often taken those folks for granted.

Cantor let his guard down by focusing on the intrigues of the Capitol and neglecting the demands of district service, constituent contact and visible fealty to local priorities. His weakness in that regard was underlined by his primary campaign's failure to turn out more supporters, or even to make sure absentee votes were recruited and secured.

When storm clouds gathered this year, and a plausible opponent emerged in David Brat, an economics professor and department head at Randolph-Macon College, Cantor could not decide what kind of campaign to run. Calm and perhaps complacent at first, he was rattled by the boos of protesters at the district convention this spring.

Clearly concerned, Cantor paid for ads and fliers attacking Brat as some kind of pointy-headed intellectual who had served on a large advisory panel for a Democratic governor. He also tried to mask his own occasional moderation on immigration with overheated claims to the contrary. The impression left by his zigzag maneuvering was largely negative.

Through it all, the now familiar cocktail of outside money and conservative media, including talk radio and live bloggers, proved enough to stagger the favorite. Once again, in the relatively small turnout of a primary, a determined cadre could overpower the less committed. Cantor's seven terms and meteoric rise from freshman class whip to the pinnacle of Washington power were not sufficient to save him. They were, in the end, part of the weight that dragged him down.

How did we, the media and the obsessively political Twitterverse manage to miss all this?

One reason was the preponderance of polls showing Cantor ahead. Some soundings done by his own pollster suggested he really had nothing to worry about.

Yet not everyone was utterly clueless. Some warned of a tight contest from the start, and surely more noticed him scrambling frantically in the closing weeks. Still, the assumption was that Cantor would recover and slip by. The question was thought to be the size of his margin, which would be an asset or a debit in his bid for the speakership.

So who has the inside lane for the top House job now?

Wisconsin's Paul Ryan, the GOP vice presidential nominee in 2012, had been counted out, in part because he was thought unwilling to challenge Cantor. Now the field is wide open. And given his lack of interest in a presidential run in 2016, wouldn't he rather be speaker than chairman of Ways and Means?

Majority Whip Kevin McCarthy, now No. 3 in the House hierarchy, was also said to be loath to take on Cantor, the No. 2. Given the sudden change in landscape, the popular and presentable McCarthy has to recalibrate, at least, and ask what lies ahead for him in his increasingly blue home state of California.

Rep. Jeb Hensarling of Texas is strong among the new conservatives. He also would bring the speakership back down South, to the state and the region that provide a disproportionate share of the GOP majority. Another favorite among conservatives is Jim Jordan of Ohio, former head of the Republican Study Committee, the ideological wellspring of the party.

And there will be calls for a woman to step up at this moment, with the spotlight likeliest to fall on Cathy McMorris Rodgers of Washington state, who has the seat once held by Tom Foley.

There may also be boomlets for other would-be stars in the party. But a word of caution to them: Ambition is always in fashion in politics, but too great an ambition too swiftly fulfilled can also prove fatal.