Accessibility links
Study: Statehouse Press Corps In Decline : It's All Politics A Pew report found that the number of full-time newspaper reporters covering state politics fell dramatically in the past decade, raising questions about their ability to closely monitor politicians. 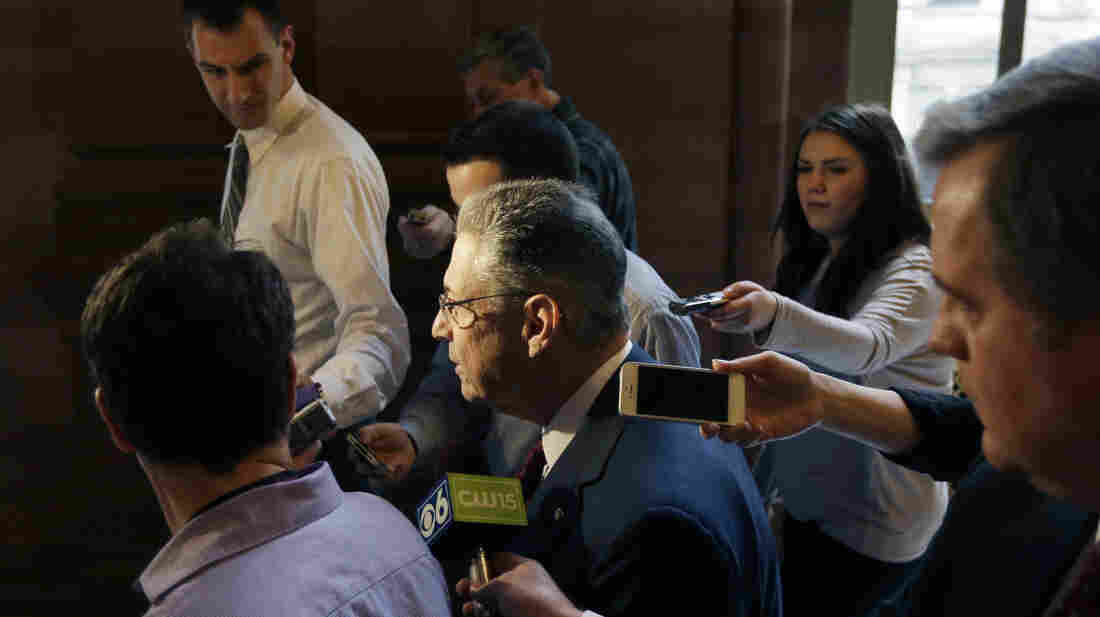 New York Assembly Speaker Sheldon Silver talks to reporters in a hallway at the capitol in Albany in March. The ranks of statehouse reporters have been thinning in recent years. Mike Groll/AP hide caption 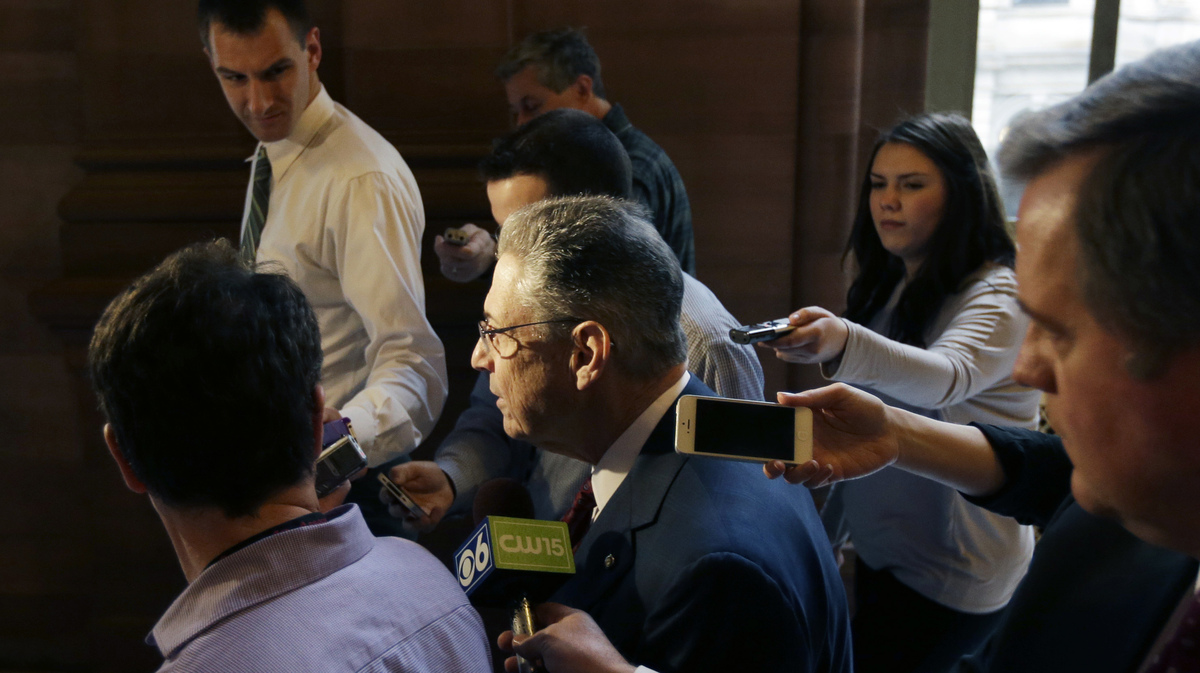 New York Assembly Speaker Sheldon Silver talks to reporters in a hallway at the capitol in Albany in March. The ranks of statehouse reporters have been thinning in recent years.

A declining number of reporters are stalking the hallways of the nation's statehouses.

That's according to a Pew Research report released Thursday. The study found that the number of full-time statehouse newspaper reporters declined by more than a third between 2003 and 2014. There are now just 164 full-time newspaper journalists reporting on the bills, protests and politicians in the nation's 50 state capitals.

Though the report sought to specifically measure newspapers' staffing trends, it also offered a snapshot of the 1,592 full- and part-time journalists covering state politics across a variety of news platforms.

Amy Mitchell, Pew's director of journalism research and a co-author of the report, said the surveys and interviews conducted for the report captured a grim feeling among reporters.

Mitchell noted that the fate of the statehouse press corps has been largely tied to the fortunes of the newspaper industry as a whole, which in recent years has faced depressed circulation and tightening resources and staffing.

But journalists surveyed in the study emphasized that state politics coverage had taken a particularly heavy blow, with a 35 percent reduction in full-time staff since 2003.

"You can lay off your statehouse reporter or you can lay off somebody covering your town that is nearer and dearer to people's hearts," Susan Moeller, a news editor at the Cape Cod Times, told the researchers. The Massachusetts newspaper cut its two-person statehouse bureau during the recession.

Mitchell added that state political coverage offers newspapers the opportunity "to do more with less," relying more on wire services like the Associated Press and testing out efforts in shared news coverage — the report points to an agreement between the Miami Herald and the Tampa Bay Times, which now share a bureau in Tallahassee.

"But it also carries some potential downsides," she said. "In general, fewer voices and less truly local coverage."

The report also notes a growing trend of "newsmakers becoming news producers," with political leaders circumventing a leaner press corps to instead send out their political messages, unvetted, via the Internet. Another Pew Research report found broad support for the news media's "watchdog" role, with 68 percent of respondents believing that press criticism kept their political leaders in check.

Still, the report points out that as newspapers have faltered, new players have risen in statehouse press rooms: in particular, "nontraditional" outlets focusing on digital news, high-priced "insider" coverage, and news with an unabashedly ideological spin.

In Albany, N.Y., Politico-owned Capital New York, a digital news publication, has grown to become the largest presence at the state capitol, its five-member staff larger than The New York Times and the local Times Union, both of which have three full-time reporters. The nonprofit Texas Tribune now has the nation's largest statehouse bureau, with 15 reporters based at the state capitol in Austin.