Accessibility links
Border Action Spurs Rick Perry From Also-Ran To 2016 Contender : It's All Politics A recent poll shows Texas Gov. Rick Perry tied for first place in a hypothetical GOP contest for the 2016 presidential nomination — mostly thanks to sending the Texas National Guard to the border. 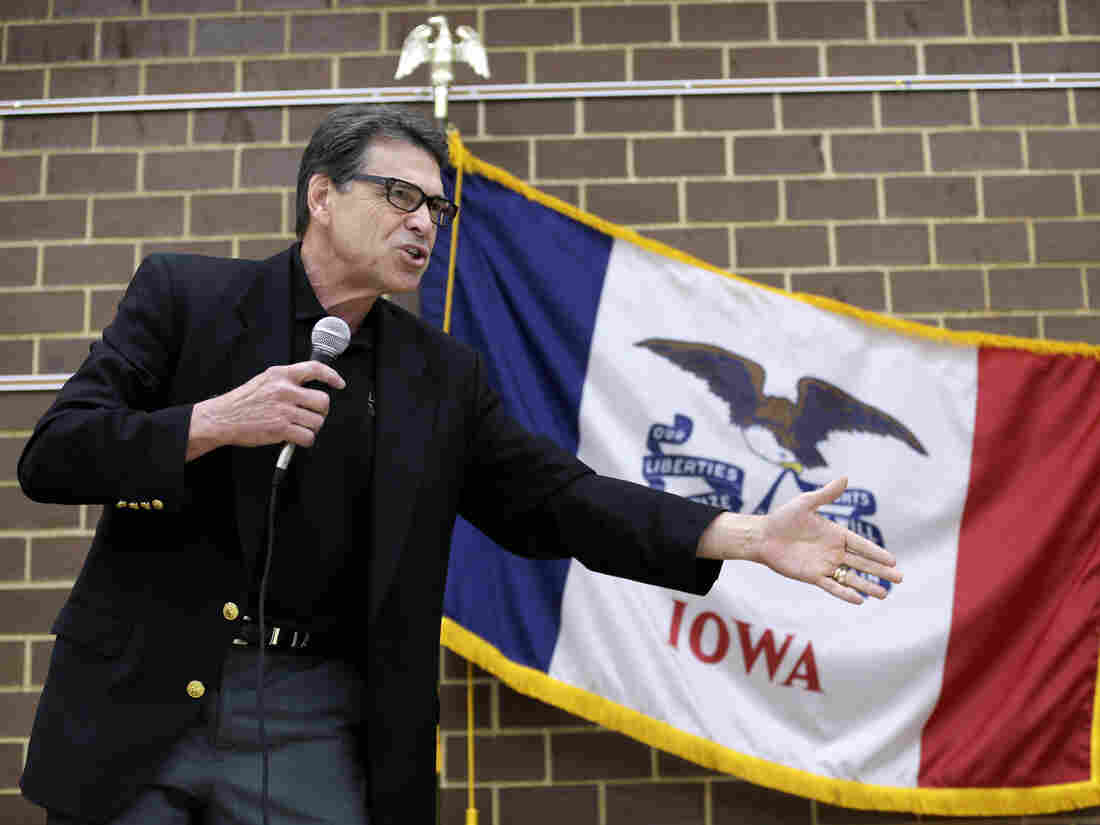 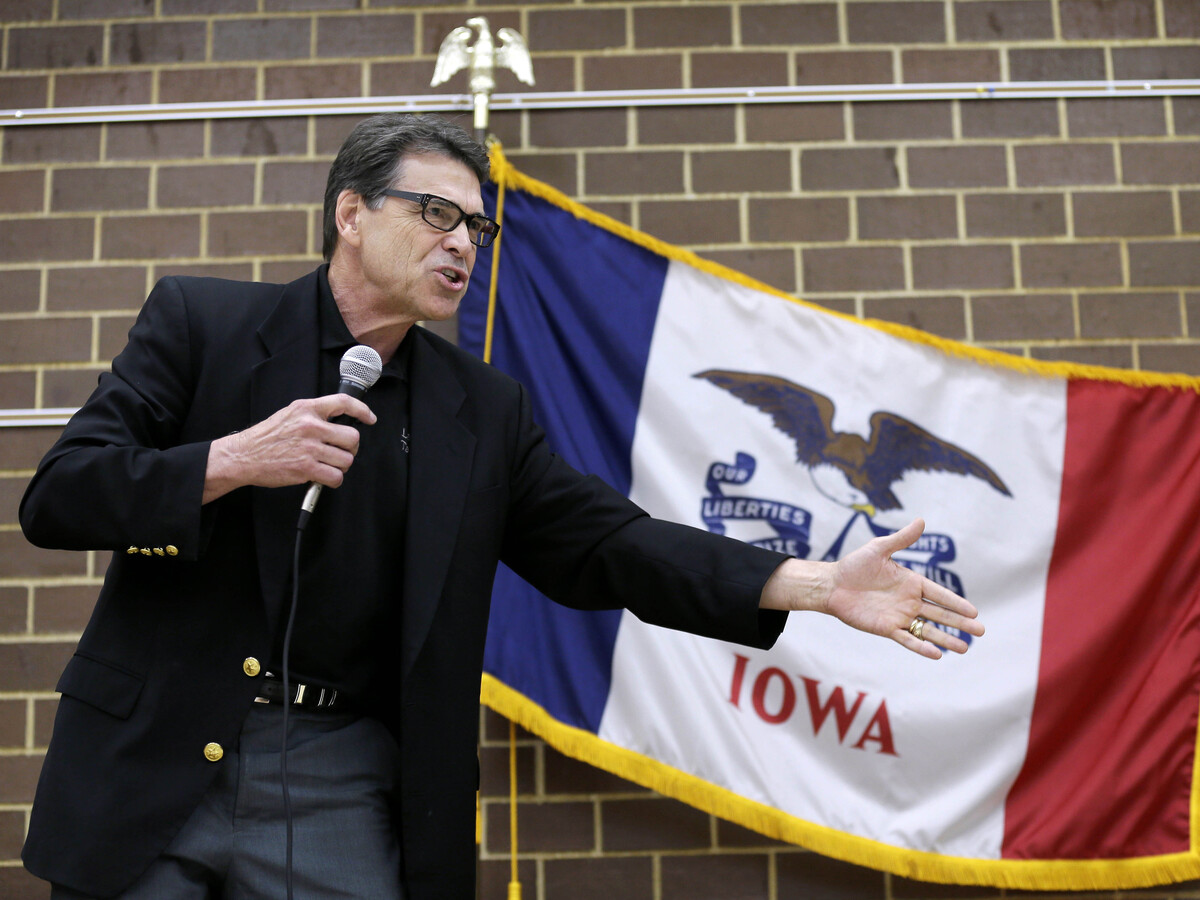 Texas Gov. Rick Perry got some good news last week. In a FOX News poll, Perry moved from an also-ran in the contest for the 2016 Republican presidential nomination to a tie for first place with former Florida Gov. Jeb Bush.

This is undoubtedly a reaction to Perry's decision 10 days ago to send 1,000 Texas National Guard troops to the border in response to the deluge of Central American children that have been showing up there.

Nothing motivates the base of the GOP like the issue of illegal immigration. Even if the immigrants are children fleeing violence and chaos in Central America, this is no longer George W. Bush's Republican Party — not nationally, and not in Texas either.

In the 1990s, the GOP in Texas watched their colleagues in California self-destruct and lose control of the state in part because of their tone on immigration at a time of Hispanic population growth. The Bush family decided Texas Republicans would go a different route, campaign aggressively in the barrio, earnestly speak bad Spanish and just generally show they cared about Hispanic voters in Texas.

It worked. George W. Bush racked up as much as 40 percent of the Hispanic vote in Texas.

It was hard to be a Texas Republican politician during this period and not absorb some of that political lesson. It sure wasn't Pete Wilson — the former California GOP governor and one-time presidential prospect — serving back-to-back terms in the White House, now was it?

And so in the 2012 GOP presidential race, when Perry was criticized by competitor Michele Bachmann for allowing the children of undocumented immigrants who grew up in Texas to get in-state tuition rates at the state's public universities, Perry responded at a Florida debate like the good Texas Republican he was: "If you say that we should not educate children who have come into our state for no other reason than they have been brought there by no fault of their own, I don't think you have a heart," he said.

In 2001, when Perry signed the Texas DREAM Act, it was supported and passed into law by state politicians in both parties: educate the ambitious Texas children, simple as that.

But by 2012, those sentiments were a sign among Tea Party Republicans that you were "squishy" on illegal immigration — someone who was too focused on amnesty and not enough on closing the nation's borders to law breakers.

Democrats like to gleefully point to Perry's "Oops" debacle during the GOP presidential debate in Michigan as the moment the nomination slipped from his grasp. But that was just the final nail in the coffin. Perry had doomed his campaign two months earlier in Florida by turning his back on his political base's most passionate issue.

Up until that moment, the Texas governor had enjoyed a reputation as a politically astute politician. Which he'd been — he was just behind on his party's immigration politics. But now he's learned his lesson and his deployment of National Guard troops to the border proves it.

If the governor's move has been a hit with Republicans nationwide, it's been a much tougher sell along the border. Neither the Texas National Guard nor the Texas Department of Public Safety requested the deployment. County sheriffs along the border complain they were never consulted and urged Perry to send them the money to hire more deputies — which they say would do more to stem the flow than the $12 million per month the state will pay to deploy troops who can't make arrests.

And the business community in the Rio Grande Valley isn't thrilled either because they believe sending troops makes their region seem dangerous and out of control, which they insist is nowhere near the truth and will drive away potential business.

In fact, the vast majority of children from Central America are under the mistaken impression that, because their home countries have become violent, dangerous places, they will be welcomed in America. Most are just walking or wading across the river and searching for border guards to turn themselves in.

But in his speech announcing the troop deployment Gov. Perry said less about the children and focused instead on what he described as an unprecedented wave of criminals and drug cartels that were invading Texas.

The Texas National Guard's officers have admitted there's some confusion about exactly what they'll do along the border. In 1997, an American high school student guarding his family's goats on the American side of the border with an old rifle was killed by Marines who'd been deployed to guard the border. The boy was Hispanic and the unfortunate Marine squad who stalked and then shot the 17-year-old was just doing what they'd been trained to do — which, of course, was not law enforcement.

That horrible mistake ended that Marine deployment, and the incident was indelibly etched in the Texas military psyche.

But no matter what the National Guard troops end up doing along the border, a jump by Perry in the FOX News presidential poll from almost last into a tie for first is a big step forward for the Texas governor's political hopes.

Although a guardsman has yet to step foot on the Rio Grande, for Perry's as-yet-unannounced presidential ambitions, the deployment may have already accomplished its mission.