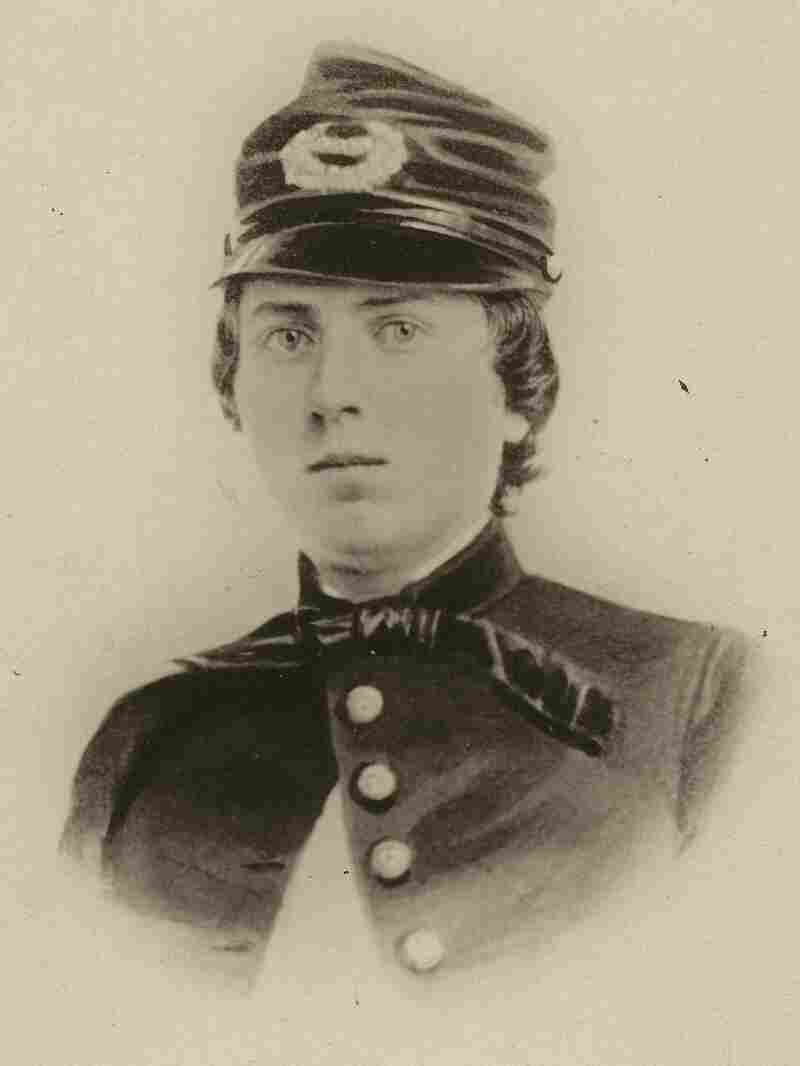 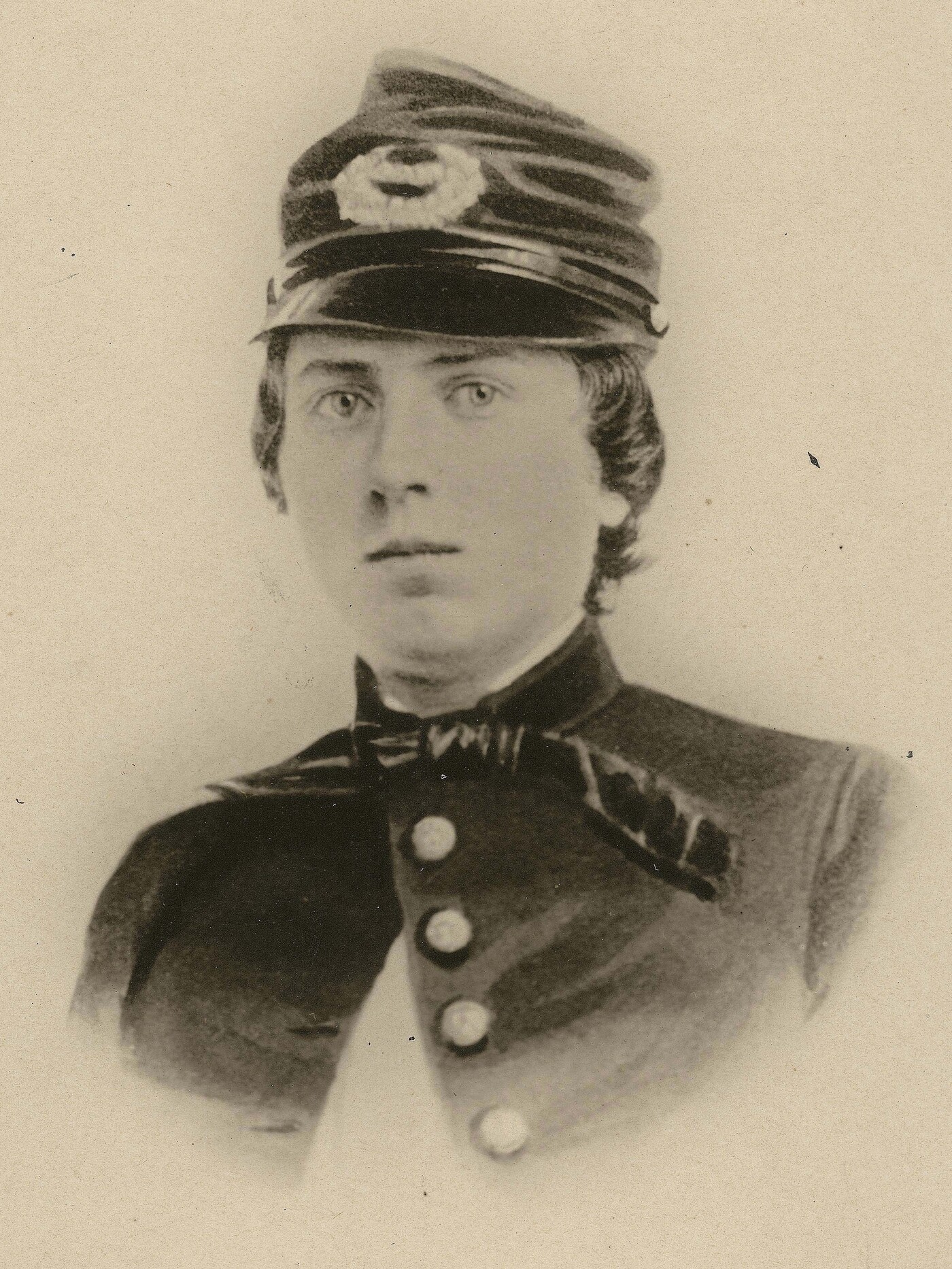 First Lt. Alonzo Cushing, shown in an undated photo provided by the Wisconsin Historical Society, is expected to get the nation's highest military decoration this summer — the Medal of Honor — nearly 150 years after he died at the battle of Gettysburg. 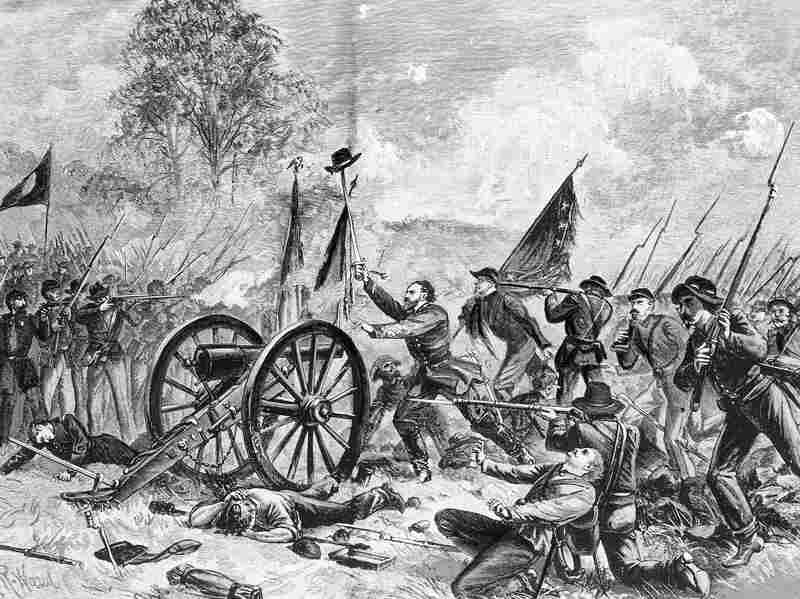 Confederate soldiers are shown during the Battle of Gettysburg, July 3, 1863, as Gen. George E. Pickett orders his 15,000 men to charge. AP hide caption 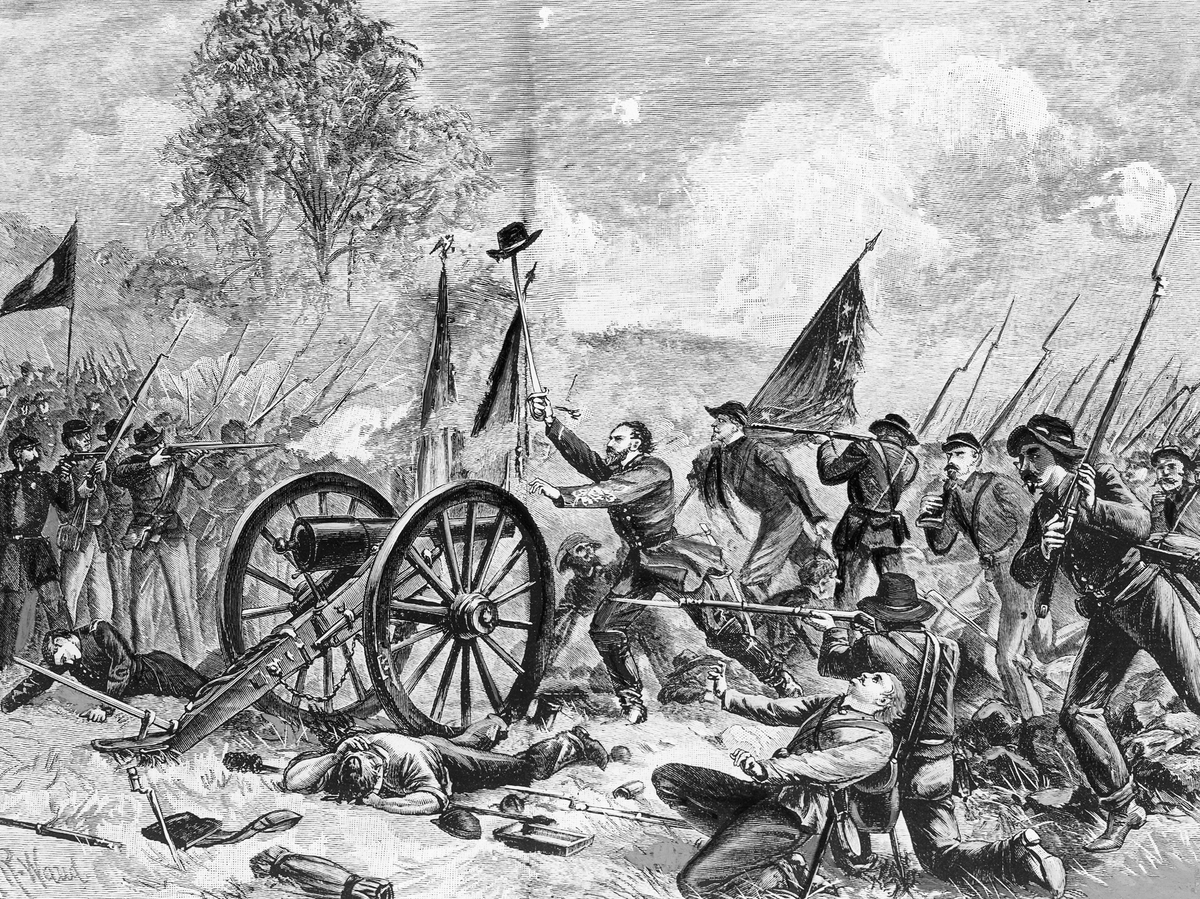 Confederate soldiers are shown during the Battle of Gettysburg, July 3, 1863, as Gen. George E. Pickett orders his 15,000 men to charge. 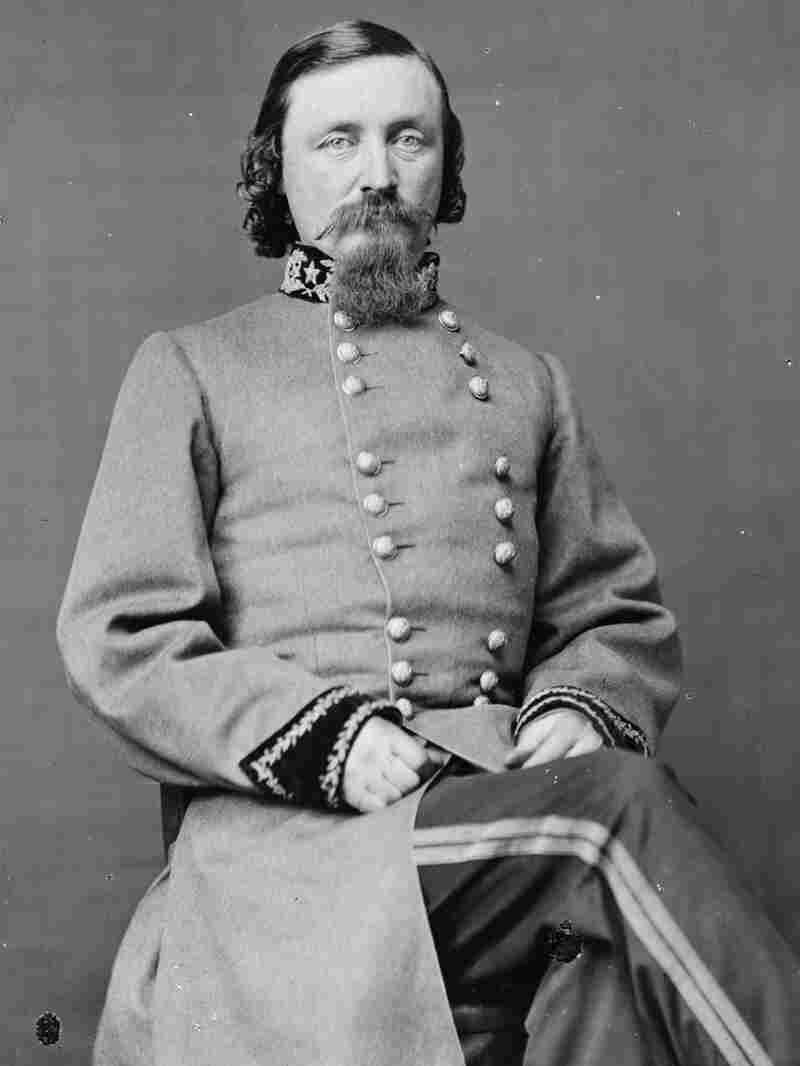 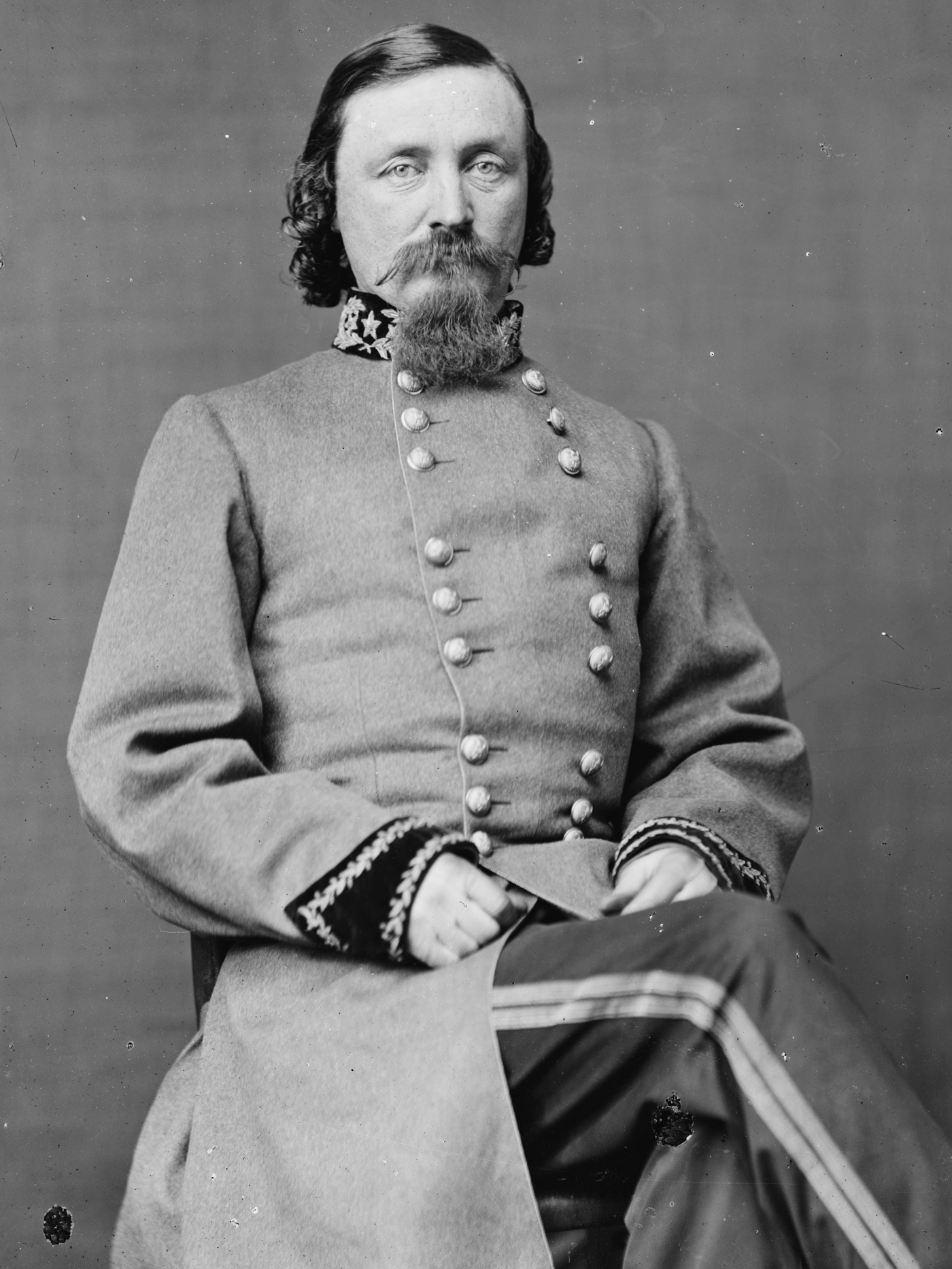 A century and a half after Pickett's Charge at Gettysburg, a 22-year-old Union officer whose heroics helped stop the rebels and turn the tide of the Civil War will finally receive the Medal of Honor.

The White House has announced that Lt. Alonzo Cushing will receive the award, ending a near three-decade campaign begun by a Wisconsin woman, now in her 90s, who lives on what had been the family farm where Cushing was born.

"When he dies, he dies repelling one of the most fabled charges, attacks, ever in American military history," said Kent Masterson Brown, a Kentucky lawyer and historian who wrote a biography of Cushing after learning of him from an exhibit at Gettysburg during a childhood visit.

Cushing was only two years out of West Point on that third day of the battle, in charge of an artillery battery in the Army of the Potomac. According to the White House announcement, Cushing was manning the only artillery piece in his unit that still worked.

"During the advance, he was wounded in the stomach as well as in the right shoulder. Refusing to evacuate to the rear despite his severe wounds, he directed the operation of his lone field piece, continuing to fire in the face of the enemy," the White House statement said. "With the rebels within 100 yards of his position, Cushing was shot and killed during this heroic stand."

Brown said it was Cushing's pivotal role that has caught so many people's attention. "What caused them to latch onto Cushing was how he died, what he was doing when he died, who he was defending that position against when he died," Brown said.

It was in the course of researching his book that he learned of Margaret Zerwekh, who in 1987 started a letter-writing campaign to honor Cushing, including one to the late William Proxmire, a Democratic senator from Wisconsin.

"It's been a long time in coming, but I think it falls under the category of 'it's never too late to do the right thing,'" said Ron Kind, who started as an intern in Proxmire's office, and is now the Democratic congressman who inserted language into the 2014 Defense authorization bill that allows the award.

But why 27 years from Zerwekh's first letter to Proxmire to President Obama's announcement?

Congressional action was necessary because Medal of Honor referrals are supposed to take place no later than two years after the event. For years, members of Congress from the South were uneasy about re-opening the Civil War, particularly a battle that has become the focus of lost-cause lore for generations.

"I think there may have been some concerns about a Union soldier receiving recognition at Gettysburg, and I think there are still some people who are sensitive about the Civil War and how it's depicted," Kind said.

In recent years, the vocal congressional opposition boiled down to Jim Webb, the former Democratic senator from Confederate Gen. George Pickett's home state, Virginia. Webb blocked attempts to honor Cushing, Kind said, because so much time had passed since the war that it would be nearly impossible to determine the facts of what Cushing did in the battle.

An assistant to Webb pointed to a letter he wrote to Senate colleagues in 2012 about his concerns.

"As a point of observation, the Confederate Army lost more than 250,000 dead — one third of its soldiers — and received no Medals of Honor," Webb wrote in a letter to other senators in 2012. "While one would never wish to demean any act of courage, I believe that the retroactive determination in one case would open up an endless series of claims. The better wisdom for this body would be to leave history alone."

"If there were objections being raised, we obviously talked to those individuals to make sure that there weren't any problems in moving forward," Kind said.

Whether most members of Congress knew they were wading into the Civil War when they passed that bill is unclear. Kind's amendment authorizing Cushing's medal was contained in a package of 14 proposed changes offered on the House floor last summer by Texas Republican Mac Thornberry — everything from permission for the defense secretary to evaluate suicide prevention to a prohibition against collaborating with China on cyber-security.

They were passed without any mention about Cushing on a voice vote — on a Thursday evening following seven hours of debate, when most House members had already gone for the night.

Six months later, negotiators for the House and Senate hammered out a compromise defense bill. This passed both chambers without much discussion, as Congress worked to wrap up for the year quickly.

"There were no surprises in any of this," Kind said.

Cushing will become the 1,523rd Union soldier to receive the Medal of Honor, and only the second since 1915, said Laura Jowdy, the archivist at the Congressional Medal of Honor Society. "The Confederate side would not qualify for a medal," she said. "Although some might argue they should."