Accessibility links
McConnell Concedes GOP Senate Will Not Mean Obamacare Repeal : It's All Politics The GOP majority leader-in-waiting tempers expectations about what a Republican-controlled Congress can realistically accomplish with President Obama in the White House. 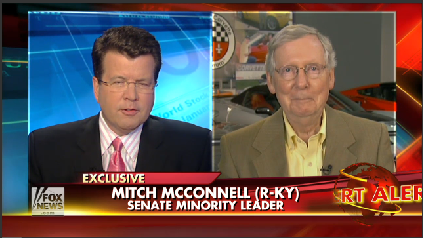 Election Day isn't until next week, but Senate Majority Leader-in-Waiting Mitch McConnell is already warning Republicans who would like to repeal Obamacare and roll back environmental regulations about two key numbers: 60 and 2.

Sixty is how many senators are required to bring all but the most noncontroversial bills to the chamber floor. And two is how many more years Democratic President Obama still has in office.

The 12-minute exchange covered a range of topics, from the 2016 presidential field to Ebola to why McConnell put nearly $2 million of his own money into his re-election campaign.

But the comments that produced angst among his party's conservative wing were the ones that tried to temper GOP expectations as to what a Congress led by Republicans can realistically accomplish over the next two years.

"This is why nobody believes Mitch McConnell anymore," said Mary Vought, spokeswoman for the Senate Conservatives Fund, a group that has pushed Tea Party candidates in GOP primaries against establishment incumbents. "He says he wants to rip Obamacare out 'root and branch,' but then flips days before his election and says he plans to surrender."

Dan Holler, a spokesman for the political wing of the Heritage Foundation, Heritage Action, said Republicans have to explain to America what they're for. "That is not going to happen if they sit there and make excuses about [Senate Democratic Leader] Harry Reid or Barack Obama. They need to be proactive about putting out an agenda," he said.

McConnell said that with a full Obamacare repeal impossible, he would instead push to repeal the law's tax on medical devices — which a number of Democratic senators already support — and to narrow its mandate on which workers must be covered.

"I'd like to put the Senate Democrats in the position of voting on the most unpopular parts of this law, and see if we can put it on the president's desk and make him take real ownership of this highly destructive Obamacare," McConnell said.

Even on the issue of executive orders, McConnell said a Republican Congress would likely be limited to restricting funding to the agencies in question.

"He is the president of the United States, and he'll be there until January 2017, McConnell said. "I voted for Mitt Romney. I wish we'd taken a different direction. We're going to do what we can in Congress to try to restrain activities that we think are a mistake."

Should Republicans take control of the Senate with the 114th Congress, McConnell's margin of control is likely to be much smaller than the 55-45 edge Democrat Harry Reid currently holds. What's more, some of the new GOP senators will be replacing red-state Democrats who had already been voting with Republicans on many issues — meaning McConnell will get fewer votes on many bills than the numbers might suggest.

And perhaps most important: McConnell will immediately be facing a 2016 Senate map that's even worse for Republicans than the one Democrats are facing now, with seven Republican incumbents looking at re-election in states carried twice by Obama, and two more from states Obama won once.

Heritage Action's Holler said that tough map is all the more reason for McConnell to be aggressive. "If they're worried about how the Senate races come down in 2016, the best thing they can do is go on offense by putting out compelling policy solutions to the problems that are facing a lot of Americans," Holler said.