Accessibility links
5 Surprises From President Obama's YouTube Interviews : It's All Politics The president didn't stray far from his talking points, but the questions were surprisingly candid anyway. 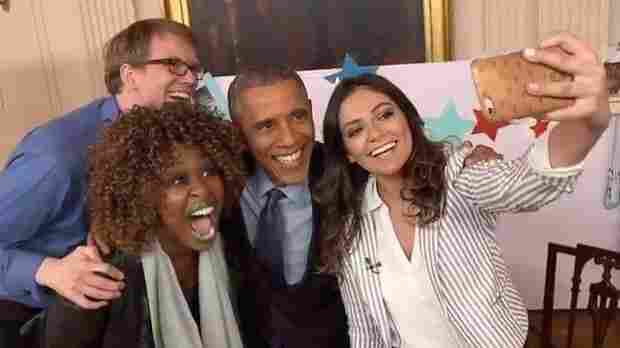 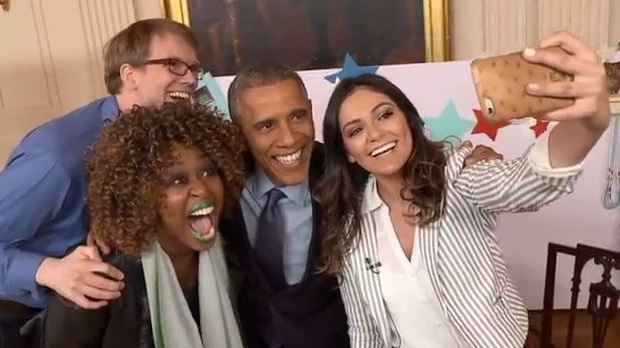 President Obama poses for a selfie after being interviewed by YouTube stars GloZell Green (left), Hank Green and Bethany Mota.

The White House has been hitting it especially hard on social media these days — it rolled out several previews ahead of President Obama's State of the Union address and an enhanced "river of content" during the speech as well.

But the latest — and splashiest — addition came Thursday, when the president sat down for interviews with three YouTube stars: GloZell Green, known for her outrageous experiments and observations; Bethany Mota, a 19-year-old who gives makeup and decorating tips; and Hank Green, who co-creates videos about science, tech and more.

Some of the questions got right to the point. Obama glossed over issues of race and policing during his State of the Union address, but GloZell Green forced him to expand on the issue with this question: "I hope that this changes — how can we bridge the gap between black, African-American males and white cops?"

Nineteen-year-old Bethany Mota asked the president why she and other young people should even care about politics. High-five, Hank Green, for saying what many younger viewers were thinking as they watched Tuesday's State of the Union: Is it all just talk?

Who knows? A BuzzFeed-style GIF-a-thon featuring Taylor Swift might be next. Until then, here are five takeaways from the YouTube interviews:

1. There was real talk on policing.

Though she's known for an over-the-top style in her videos, GloZell Green shared a few serious moments with the president. One came when she told him she cut the hoods off all her husband's sweatshirts because she fears for his safety. "I'm afraid when he goes outside that somebody might shoot and kill him. And it's not like regular folks — it's the po-po." She also said she has three family members in law enforcement.

Obama replied, "First of all, we always have to just remind ourselves that the overwhelming majority of police officers, they are doing a really tough job and they're doing it well.

"What we also know is that there are still biases in our society, that in split-second situations where people have to make quick decisions, that studies have shown African-American males are seen as more threatening, which puts them in more vulnerable positions," he said.

2. The elephant in the room.

Hank Green said there were some "great ideas" in Tuesday's speech but that he joined others in being "a little worried that none of them are at all politically feasible. Am I wrong?"

3. The interviewers were refreshingly honest.

Mota had a confession: Before preparing to interview the president, she said, "I never really followed politics that much."

"Politics is just — How do we organize ourselves in a society? How do we make decisions about how we're going to live together?" the president responded.

"You better have a voice and know who's ... making decisions," he said, adding that young people will get into politics through the issues that matter to them, like the environment, student loans and LGBT rights.

Mota shared that she was cyberbullied when she was younger. When asked for advice on preventing bullying, Obama said, "I think this is one area where your voice is more powerful than the president of the United States."

All in all, the president didn't stray far from his talking points. But the questions weren't too silly and were surprisingly candid.

While the sit-downs touched on news events, the questioners did a nice job of making complex policy issues accessible and personal.

"I thought I was able to say whatever I wanted to say," GloZell Green said. "But then the Sony hacking thing happened. And it's like, why didn't the government help Sony feel protected and safe enough to release the film on time? Because the fallout affects me."

Obama didn't really answer the question, but did address how the government will work with private companies to share best practices on how they can protect themselves. "It's sort of like with your own ATM card or your passwords, your personal privacy, there's certain things you can do to make yourself more protected.

"So you're gonna be alright, people are gonna still be able to watch your show. I promise."

One of GloZell Green's most infamous videos is of her attempting the cinnamon challenge (warning: this video can't be unseen). She ate a ladle full of cinnamon, spit it out, and earned 42 million views. During her interview with the president, there was a jar of cinnamon, a ladle and a glass of water on a table behind them. We waited, but nothing happened.