Accessibility links
Wild Day In Madison Likely To Be Another Win For Gov. Walker : It's All Politics The latest protests in Madison could reinforce Walker's law-and-order image, at least with Wisconsinites who voted for him — and Iowa Republicans who will be voting for president early next year. 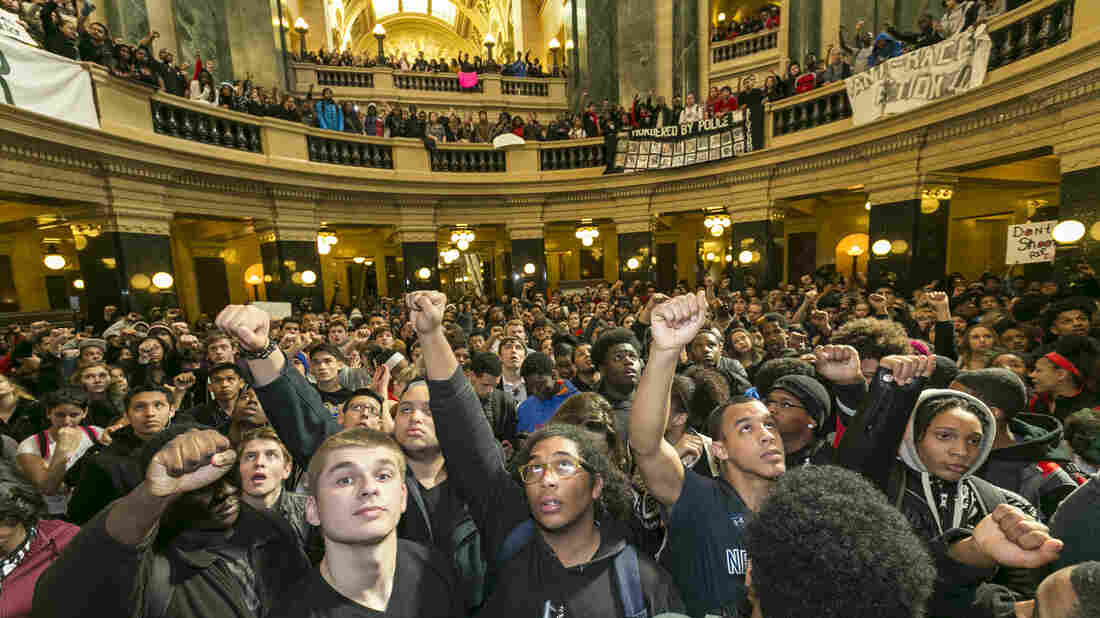 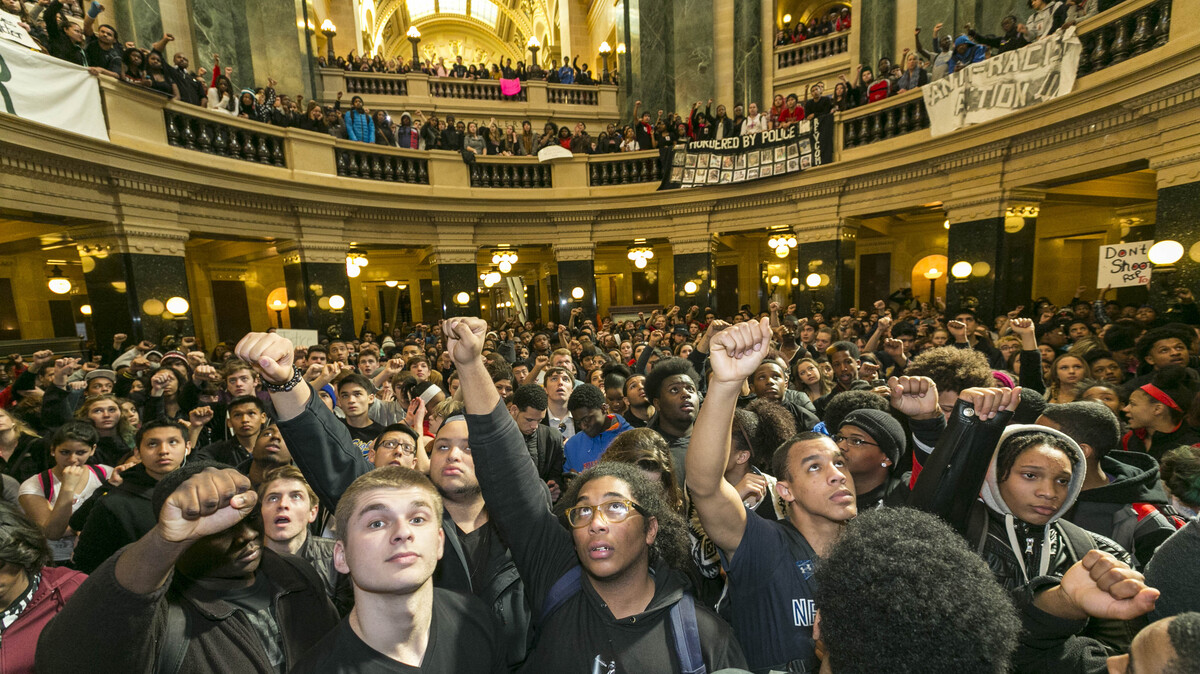 You could scarcely imagine a day that better demonstrated the split personality of Wisconsin politics.

On Monday, the state Capitol building in Madison was flooded once again with an angry crowd of protesters. This time the outrage was sparked by a local police officer who shot and killed an unarmed 19-year-old black man.

The sight of these protesters on the street and in the sumptuous marble rotunda of the state Capitol was featured on cable news all day. 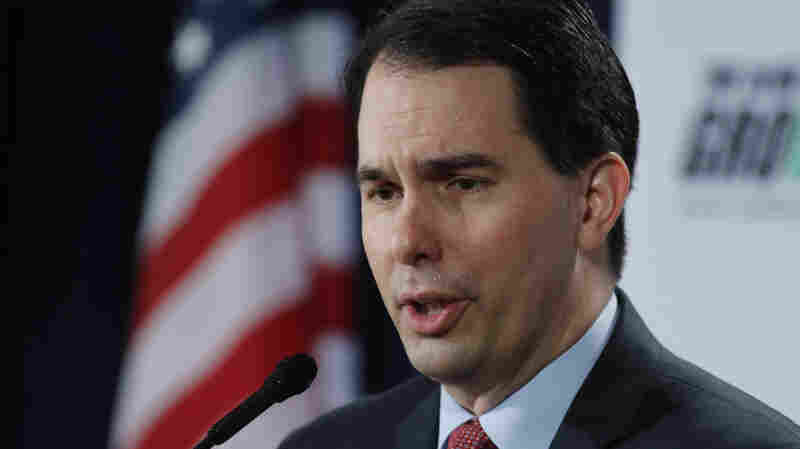 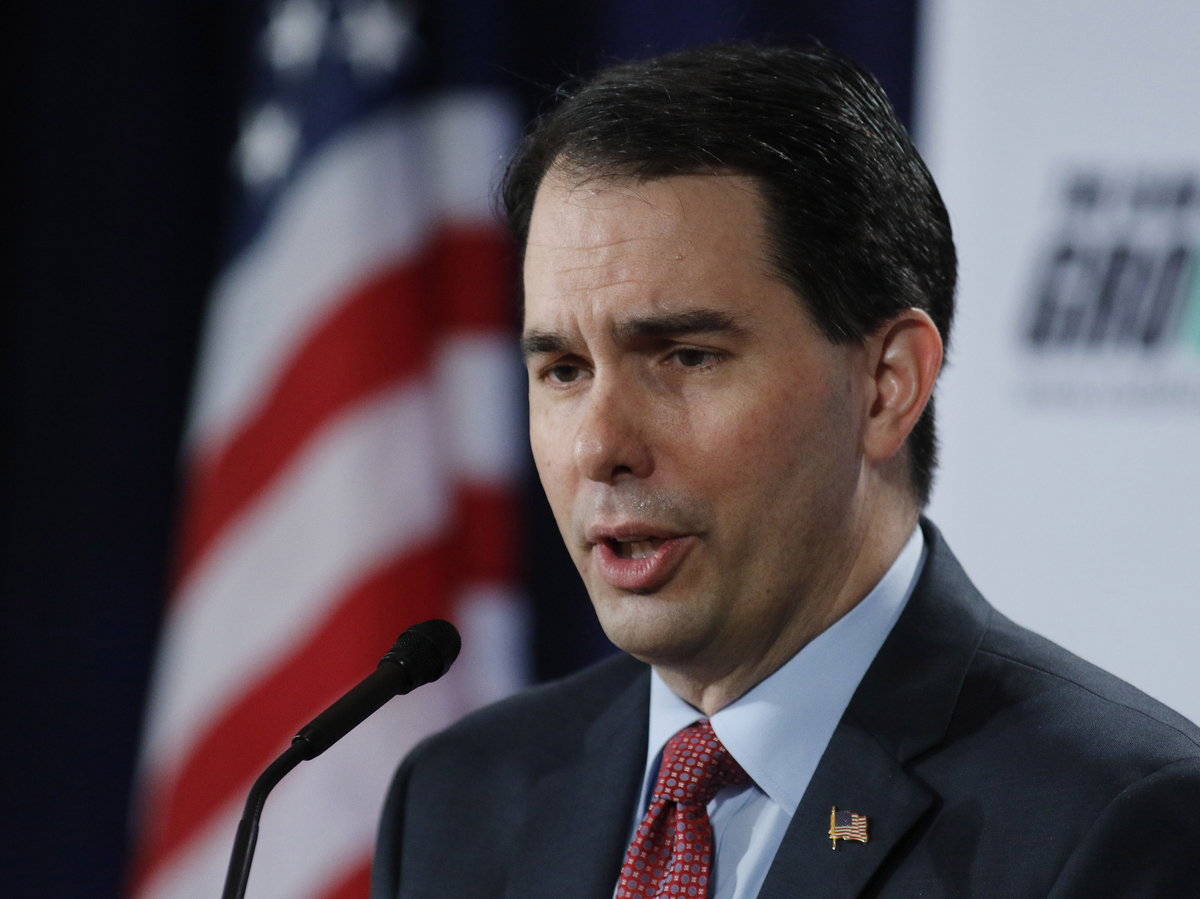 Elsewhere at the Capitol and with little fanfare, Gov. Scott Walker signed a bill Monday making Wisconsin a "right to work" state.

But elsewhere in that building, earlier that day, another event took place that may have even more lasting effect in the state and beyond. With little fanfare, Republican Gov. Scott Walker signed a bill making Wisconsin a "right to work" state. That means workers in private industry will no longer be contractually obliged to pay dues or fees to unions that represent them.

Such laws strike at the heart of organized labor as we know it. They were unthinkable in the union-friendly confines of Madison not long ago, just as they were elsewhere around the Great Lakes industrial belt. But one by one, these states have yielded to the economic and political realities of the post-industrial age. Right-to-work laws, once a way for Southern states to lure factory owners, have spread north as far as Michigan, and now Wisconsin, and are now on the books in 25 states.

Walker's governorship, still only a little over four years in length, has been intimately involved in the changes in Wisconsin that made "right to work" possible.

Just a few months into his tenure in 2011 he produced a budget that disavowed the state's long tradition of collective bargaining for teachers and other public employees. That is why many people watching the news this week may have thought they'd seen this Madison movie before — the Capitol in 2011 was occupied for days by public employees, students and other supporters.

If it all seems contradictory, it is entirely consistent with Wisconsin's history. It is the home of both progressive champion Robert M. LaFollette and anti-Communist firebrand Joseph R. McCarthy, national icons of the left and the right. More recently, Wisconsin has voted Democratic in seven consecutive presidential elections and in eight of its last nine elections for U.S. Senator. Yet it now has five Republicans in its eight U.S. House seats, Republican majorities in both chambers of the legislature and a governor who is a nascent national star of the right.

Walker faced down those noisy protesters and prevailed, not only in the budget fight but in a recall election in 2012 and a bid for a second term in 2014. This has made him a hero in the conservative movement and a leading candidate for the Republican presidential nomination in 2016. He has said this show of fortitude on his part is what qualifies him to take on ISIS and Vladimir Putin. In any event, it surely has qualified him to take on the rest of the current Republican field.

In fact, in 13 campaigns over the past quarter century, Walker has become known for combat, albeit political rather than military. His battles are not accidental, they are the product of his own carefully calculated moves.

He did not campaign against collective bargaining for public employee unions when he won his first term as governor in 2010, but moved to end the practice immediately upon taking office. He did not campaign for a right-to-work law when seeking a second-term in 2014 and publicly said such a fight in the Legislature would be "a distraction." But scarcely two months into the new legislative session, that law has been enacted.

Walker has also prospered via careful calculations about racial politics. Wisconsin has a relatively small African-American population (about 6 percent), far smaller than those in Michigan, Ohio or Illinois. That population did not really arrive until after World War II and is heavily concentrated in the cities of Milwaukee, Madison and Racine. The suburban, exurban and rural counties of the state remain as Anglo as the Dakotas. So for half a century, the issues of welfare, voting rights, housing and crime — all with racial overtones — have been powerful in state politics.

Walker began his career in his early 20s, representing affluent Milwaukee suburbs in conflict with the city. He has climbed the power ladder on the strength of that voting bloc yoked with support from wage-earning white voters throughout the state. Even in his recall election, which was focused on his busting of the public employee unions, he carried nearly half the voters in households with a union member in a private sector job. As Walker had calculated, machinists and autoworkers often felt more affinity with Walker than with the teachers and bureaucrats who were their "brothers and sisters" in union solidarity.

And while Walker has not been an outright polarizing figure on race, he has known his audience. After the latest shooting in Madison this weekend, Walker issued a statement that stressed support for the police and his own plan for transparent investigations of misconduct.

In all likelihood, if the latest protests in Madison continue, they will serve once again to reinforce Walker's law-and-order image, at least with Wisconsinites who voted for him. And that image may be strengthened as well across the state line in Iowa, where Republicans may get a chance to vote for Walker early next year.

Walker may eventually pay a price for his union-busting in Wisconsin if it comes to be seen as anti-labor rather than anti-union. But there now exists the possibility that Walker will not need to seek a third term in Madison in 2018. If he gets on the GOP's national ticket in 2016, he might just have moved on to Washington by then. The events of this week will only make that more plausible, and that may have entered into his calculations, too.