Accessibility links
A First For Joe: Biden Could Break Tie To Confirm Attorney General : It's All Politics Vice presidents have cast 244 tiebreakers in the Senate, but if Biden rescues Loretta Lynch's bid, it will be the first time it has been used for a Cabinet nomination.

A First For Joe: Biden Could Break Tie To Confirm Attorney General

A First For Joe: Biden Could Break Tie To Confirm Attorney General 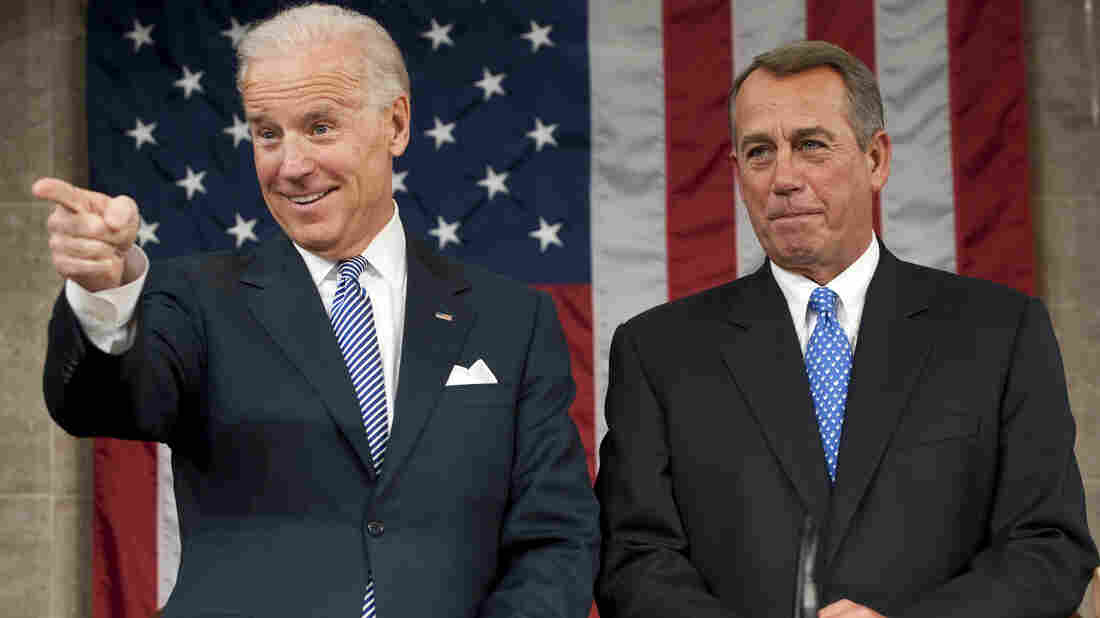 Vice President Biden and House Speaker John Boehner wait for President Obama's State of the Union address in front of a joint session of Congress in 2012. As vice president, Biden is also leader of the U.S. Senate, but only gets a vote when senators are evenly divided. Saul Loeb/AP hide caption 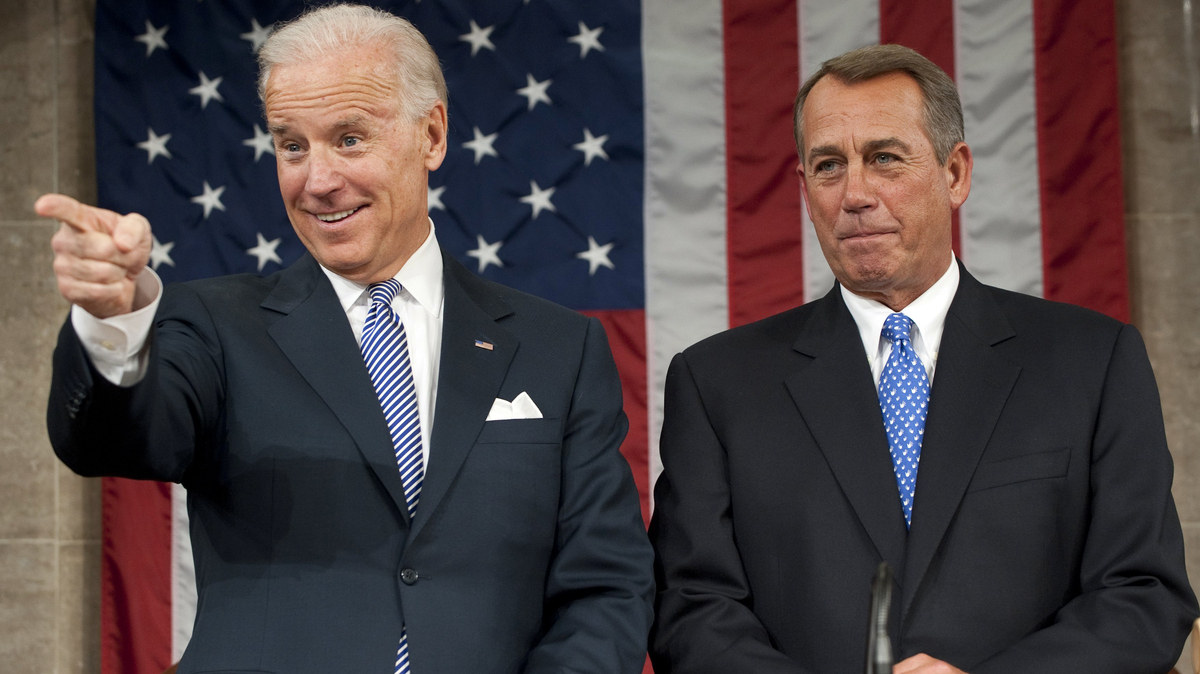 Vice President Biden and House Speaker John Boehner wait for President Obama's State of the Union address in front of a joint session of Congress in 2012. As vice president, Biden is also leader of the U.S. Senate, but only gets a vote when senators are evenly divided.

Vice President Joe Biden has been more visible than almost any of his 46 predecessors in the nation's No. 2 office. He's had more access to the Oval Office and more input on policy than all but a handful.

But there is one VP duty Biden has never fulfilled, because he's never had a chance: He has never broken a tie in the Senate, which is a salient VP responsibility embedded in the Constitution. In these past six years and two months, there hasn't been a Senate tie to break.

That may be about to change. Loretta Lynch's nomination to be U.S. attorney general is awaiting a vote in the Senate, where she has only 50 announced commitments — all the chamber's Democrats and independents and four Republicans. So, unless a fifth Republican comes around, Biden will be needed to break the tie.

Of course, there will be no suspense regarding Biden's vote, says Senate historian Donald Ritchie. "The only vote a vice president needs to vote is a yes," he says with a smile.

If Biden should finally cast his maiden tiebreaker and confirm Lynch, it will be the 245th time a VP has exercised this privilege dating back to 1789.

The use of the vice presidential tiebreaker was a standard feature of Senate legislating in the early years of the republic. George Washington's VP, John Adams, still holds the record for tiebreakers at 29. A few decades later, Vice President John C. Calhoun managed 28 while serving two terms under John Quincy Adams and Andrew Jackson.

Yet, remarkably enough, if Biden rides to the rescue for the Lynch nomination, it will be the very first time the tiebreaker has ever been used to confirm a Cabinet nomination.

Ritchie says there have been 13 other presidential nominations that needed the tiebreaker power to be confirmed, but none for a Cabinet post. The lack of such instances reflects the Senate's willingness to let a president generally have his way on Cabinet appointments.

"Cabinet members come and go, and if they do something wrong they can be gone pretty quickly," notes Ritchie. "Justices are lifetime appointments in an independent branch."

One Cabinet rejection happened in dramatic fashion in 1925, and it caused a drastic downturn in the political fortunes of Vice President Charles G. Dawes.

President Calvin Coolidge had named Charles Warren to be his attorney general, which was controversial because of Warren's ties to the sugar industry. When the vote came, Dawes was expected to break the tie but was at his hotel taking a nap. By the time he scrambled back to the Capitol, one of the yes-voting senators had switched, and the nomination had been scotched.

Coolidge was furious, and Dawes was lampooned mercilessly. In his book The American Vice Presidency: From Irrelevance to Power, journalist-historian Jules Witcover recounts how Dawes was given a 4-foot-tall alarm clock by reporters, and how others placed a sign on his hotel saying "Dawes Slept Here." Considered a popular contender for the presidency prior to the incident, Dawes saw his star rapidly fade. 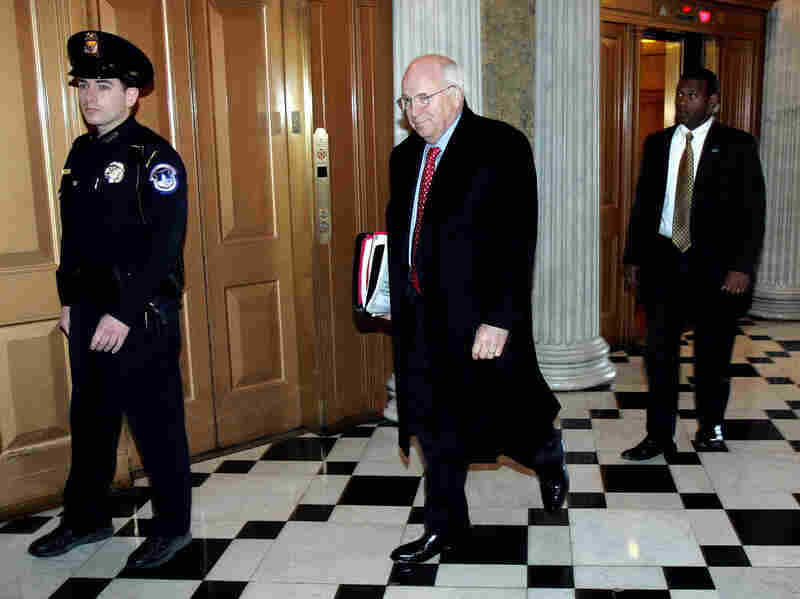 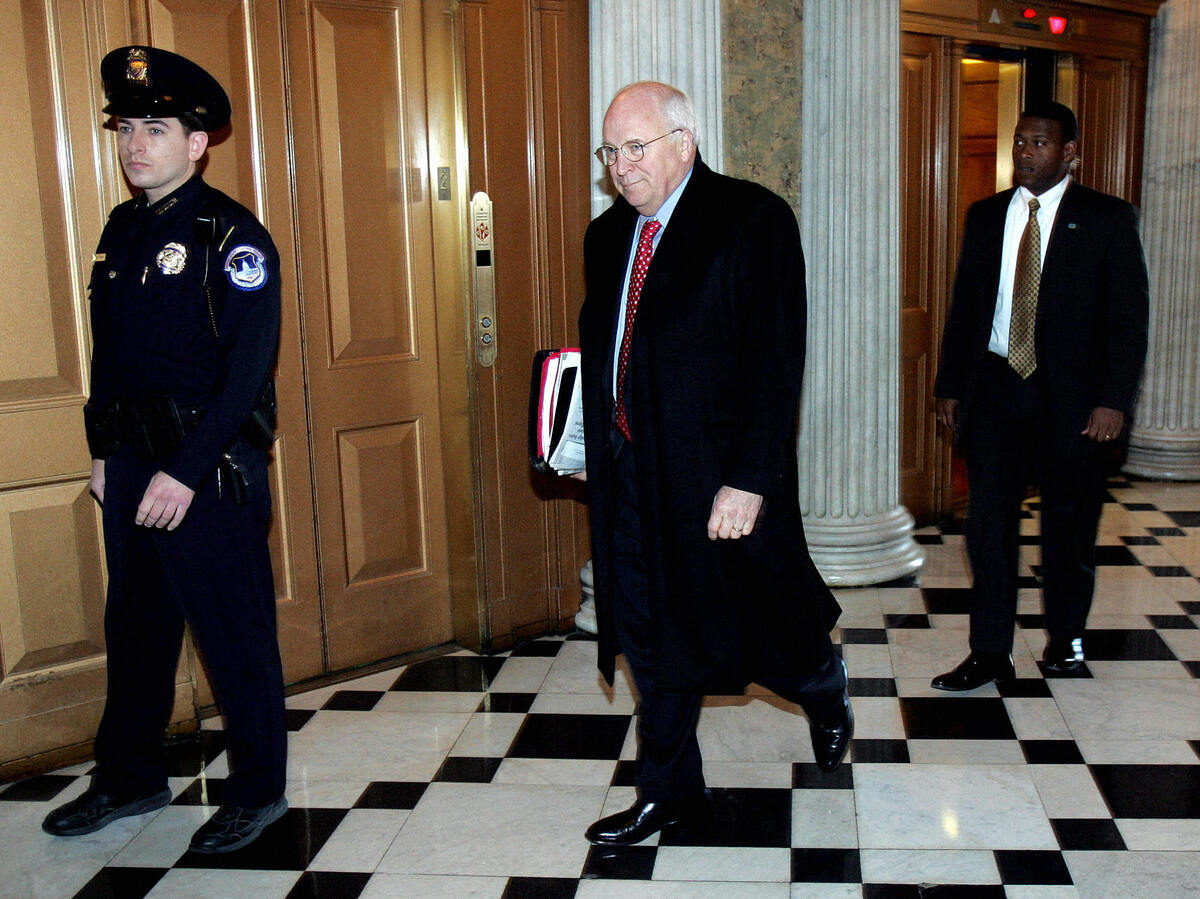 Former Vice President Dick Cheney arrives at the Senate to cast a tie-breaking vote in 2005. Cheney broke ties eight times in the Senate as vice president.

Ritchie also has an explanation for Biden's long wait for a tiebreaker opportunity: It's another sign of the Senate's increased domination by the filibuster.

Controversial matters once came to the floor rather routinely, so close votes were likely on final passage and ties were also possible. Throughout most of the Senate's history, both the major parties have had liberal and conservative wings, as well as strong regional factions. Complex coalitions formed and changed from issue to issue.

"In the current Senate the parties have become much more cohesive," says Ritchie.

With the party line the critical factor, the minority's right to filibuster has become the routine organizing principle of Senate procedure. And it takes a three-fifths majority to invoke cloture and cut off a filibuster.

"So it really takes 60 votes to get anything done — and if you have 60, you don't have to worry ... and the vice president isn't any help with that," Ritchie says.

The Lynch nomination, however, has not been filibustered. It cleared the Republican-dominated Judiciary Committee last month by a vote of 12-8, with committee chairman Sen. Orrin Hatch of Utah one of three Republican votes in favor of confirmation (Sens. Lindsay Graham of South Carolina and Jeff Flake of Arizona cast the others).

A fourth Republican senator, Maine's Susan Collins, also has said she would vote for Lynch. Collins has long been recognized as a moderate within the party and an advocate of women in government.

There are a handful of Republican senators who have not committed themselves either way, including Mitch McConnell of Kentucky, the Senate majority leader, and first-termer Mark Kirk of Illinois, who may have a tough re-election battle in Illinois next year. Also uncommitted are two Republican women, Shelley Moore Capito of West Virginia and Kelly Ayotte of New Hampshire. Ayotte faces a likely challenge next year from her state's popular governor, Maggie Hassan.

Any of these Republicans might yet come off the fence to make Lynch's confirmation a done deal. But if none does, the deal could be sealed by a history-making, tie-breaking vote from Joe Biden.