Accessibility links
5 Reasons Cruz Announced His Candidacy Early : It's All Politics Cruz has not been the buzz candidate so far in the GOP's 2016 discussions — nor the media's. In fact, he has seemed at times a bit of a faded rose, a skyrocket that has spent much of its sparkle. 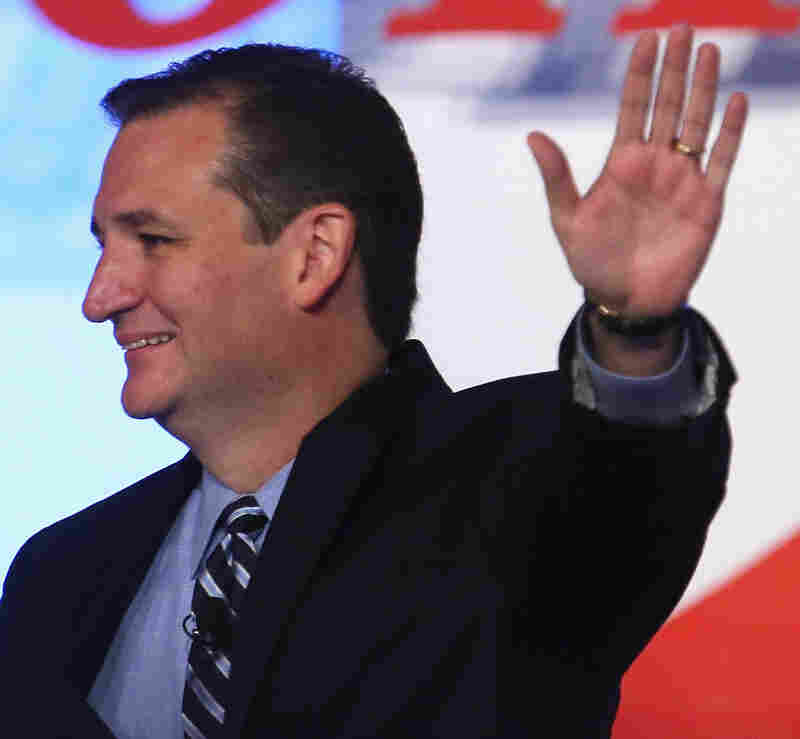 Sen. Ted Cruz needs buzz, money and to be taken seriously. He hopes he can accomplish that by getting in early. Mark Wilson/Getty Images hide caption 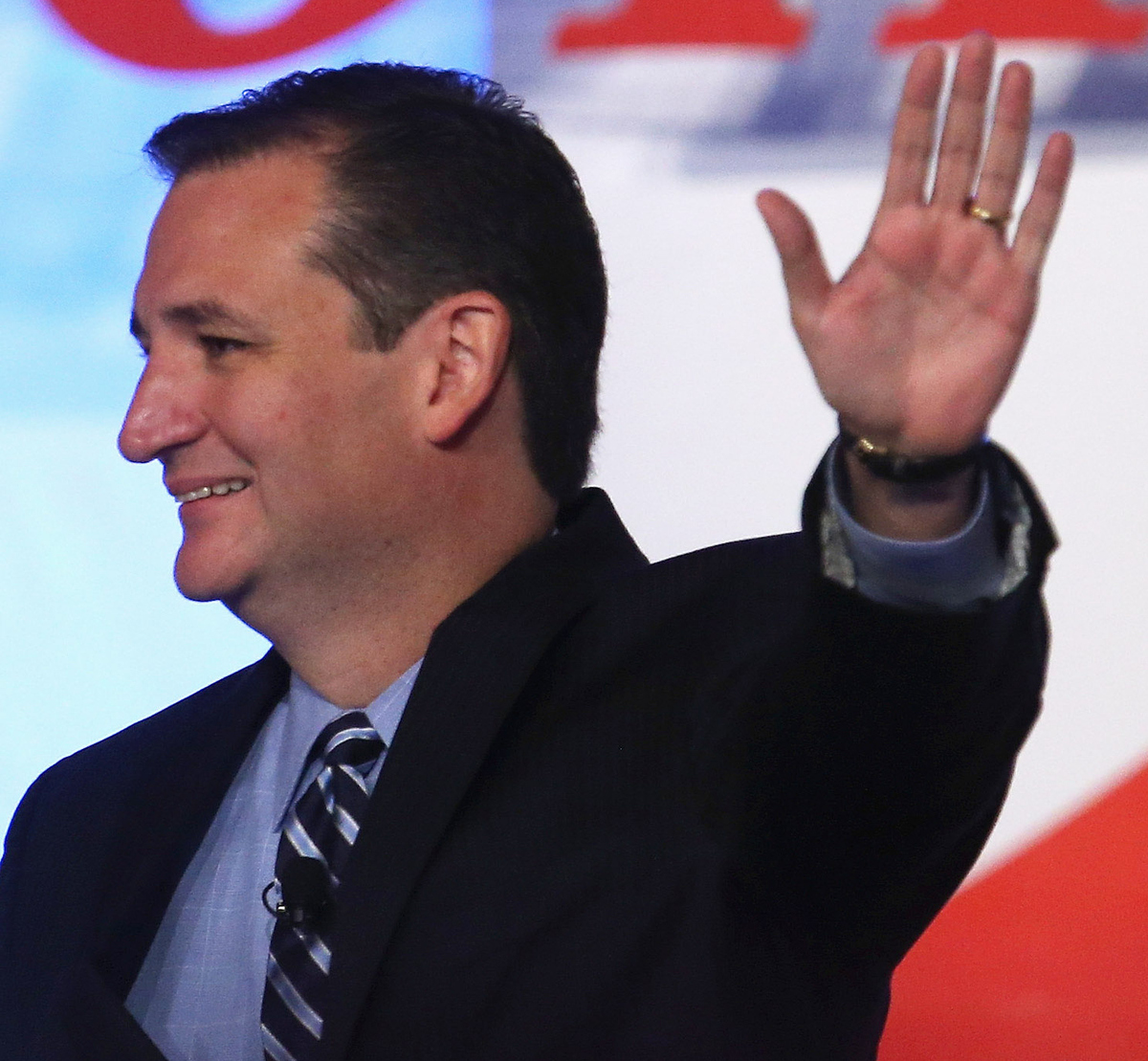 Sen. Ted Cruz needs buzz, money and to be taken seriously. He hopes he can accomplish that by getting in early.

Texas Sen. Ted Cruz has apparently had enough of the fig leaf most presidential candidates wear as their unofficial spring costume the year before the election actually happens.

That is a bold stroke, but entirely in keeping with the go-for-broke style the junior senator from Texas has exhibited since first challenging the Republican establishment's candidate for the Senate in 2012.

Cruz, who officially announced his candidacy for president in a midnight Monday tweet and video, has not been the buzz candidate so far in the party's 2016 discussions — nor the media's. In fact, he has seemed at times a bit of a faded rose, a skyrocket that spent much of its sparkle. There was the debacle over his brinkmanship in the 2013 government shutdown. That was followed by countless run-ins with Republican colleagues in the Senate.

But Cruz is still a barnburner on the hustings and a potential game changer in the presidential contest. While he is not among the leaders in national polls of Republicans, he has an undeniable appeal to the base voters, who dominate in primaries — especially in red states. And polls at this stage are largely meaningless.

So it makes sense for him to step out early and go big doing it. In fact, there are at least five good reasons for him to make his move as the first major full-fledged candidate.

1. Cruz needs to cut through the noise and confusion created by the expanding GOP field. Given all the talk on the right about finding a fresh face, why not give the media one relatively fresh face to focus on right now? In recent days, the campaign theme on the Republican side has been, "The more the merrier." That may be great grist for the media's mill — as we love to do candidate profiles and lists that look like brackets for the NCAA basketball tournament. But that's not helping Cruz. As static about countless prospective candidacies has grown, Cruz has struggled to get his signal through. Cruz had hoped his status as the enfant terrible of the Senate's backbench would make him newsworthy in early 2015. But right now that distinction has been commandeered by Sen. Tom Cotton of Arkansas, who is seven years younger than Cruz (and has been in the Senate less than three months).

2. Getting in first should help Cruz raise money. The biggest challenge facing Cruz at the moment is money. And the fastest way to raise real money is to get out there with a real campaign and ask for it. His home state is one of the top sources of political money, of course, as it has been for decades. But Cruz is competing for Texas donors with former Gov. Rick Perry, who has been aggressive about locking down oil money and other wealthy politicos in the Lone Star state, much as he did in his first campaign four years ago. Rand Paul also has a claim on many Texas dollars, having grown up in the state his father served in Congress. The Paul name is still highly revered by many Texas conservatives. Jeb Bush and other candidates will also find adherents here, so Cruz needs to defend his home court aggressively.

3. Skipping the "exploratory committee" phase cuts through the usual persiflage that surrounds nascent candidacies. If you're running and you know it, why not say so? Real men needn't horse around with exploratory committees. Aren't average news consumers confused by the dance of seven veils that all those coy candidates perform every four years? More serious students of the process may appreciate the nuances and legal uses of shadow campaigns, but even they often find them to be annoying ploys to prompt multiple "announcement" stories. So dispensing with this business serves not only to elevate the seriousness of the Cruz bid, but also to reinforce his image as a straight shooter, a regular guy who calls things by their right names. The Cruz campaign manifesto, just now hitting the stores, is titled A Time for Truth.

4. The early declaration bolsters Cruz's bid to be the standard-bearer for the party's conservative activists. There are many wannabes who'd like to run in this lane. Indeed, only a few are going the other way and appealing to the straight-up establishment side of the party (Jeb Bush, Chris Christie, Marco Rubio). So, to hold off the legion of competitors on the right, Cruz needs to break the tape and stand apart from the mere prospects, such as Rick Santorum, Mike Pence, Mike Huckabee, Bobby Jindal and others who would be his natural rivals on the right, if they decide to run. Getting in early may discourage some of this crowd — and also serve to eclipse some of the boutique candidates such as Ben Carson and Carly Fiorina.

5. The sooner Cruz gets in, the longer his long-shot candidacy will last. Even if he is washed up after the first four voting events, he will have had 10 months of formal candidacy now that he's in. That should be enough not only to test the market but to maximize his media exposure. Not all his media attention will be positive, of course, but Cruz thrives on attacks and uses them to enhance his credentials as a crusader for the cause. It might well serve Cruz to battle through the first few primaries, bow out relatively early and return as a ticket-balancer at convention time. The most overlooked element of the presidential nominating game is that it has two winners: the presidential nominee and the running mate. The candidates always deny interest in it, but scarcely anyone ever turns down the VP spot when it's offered. There is no better springboard to the top of the national ticket than the lower half of that ticket.