Accessibility links
Calif. Lawyer Proposes Ballot Initiative To Kill Gays And Lesbians : It's All Politics The "Sodomite Suppression Act" is unlikely to get a vote, but it's making waves in the Golden State, where all it takes is $200 and a few hundred thousand signatures to get on a ballot. 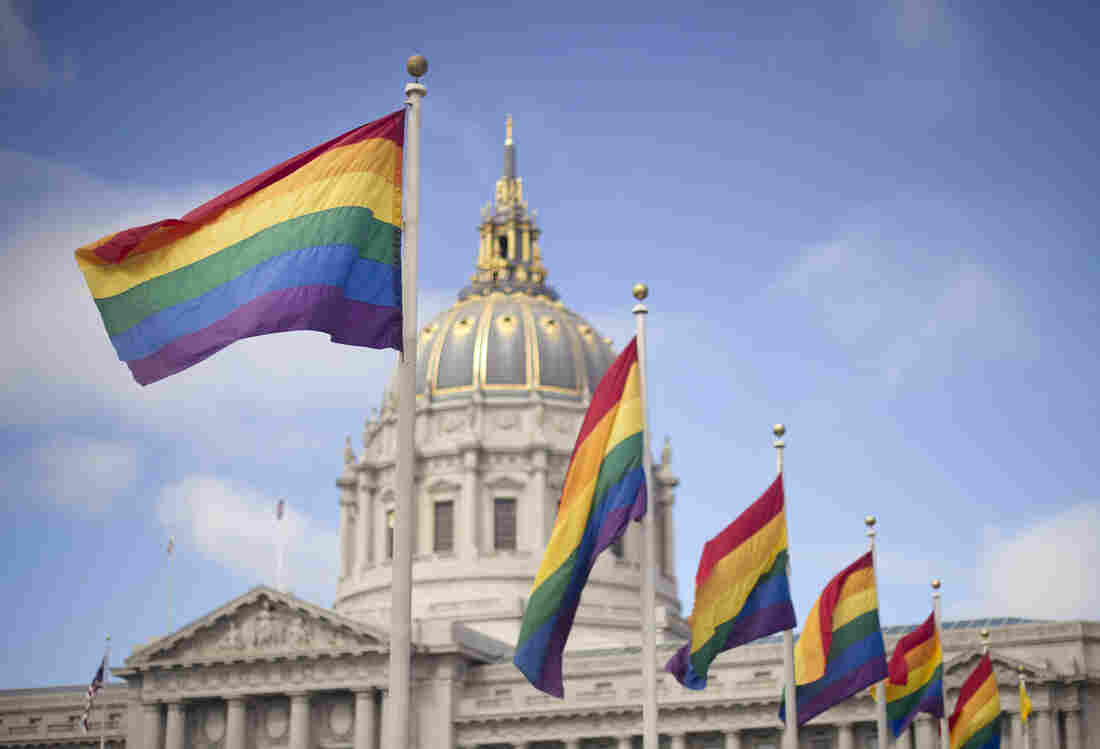 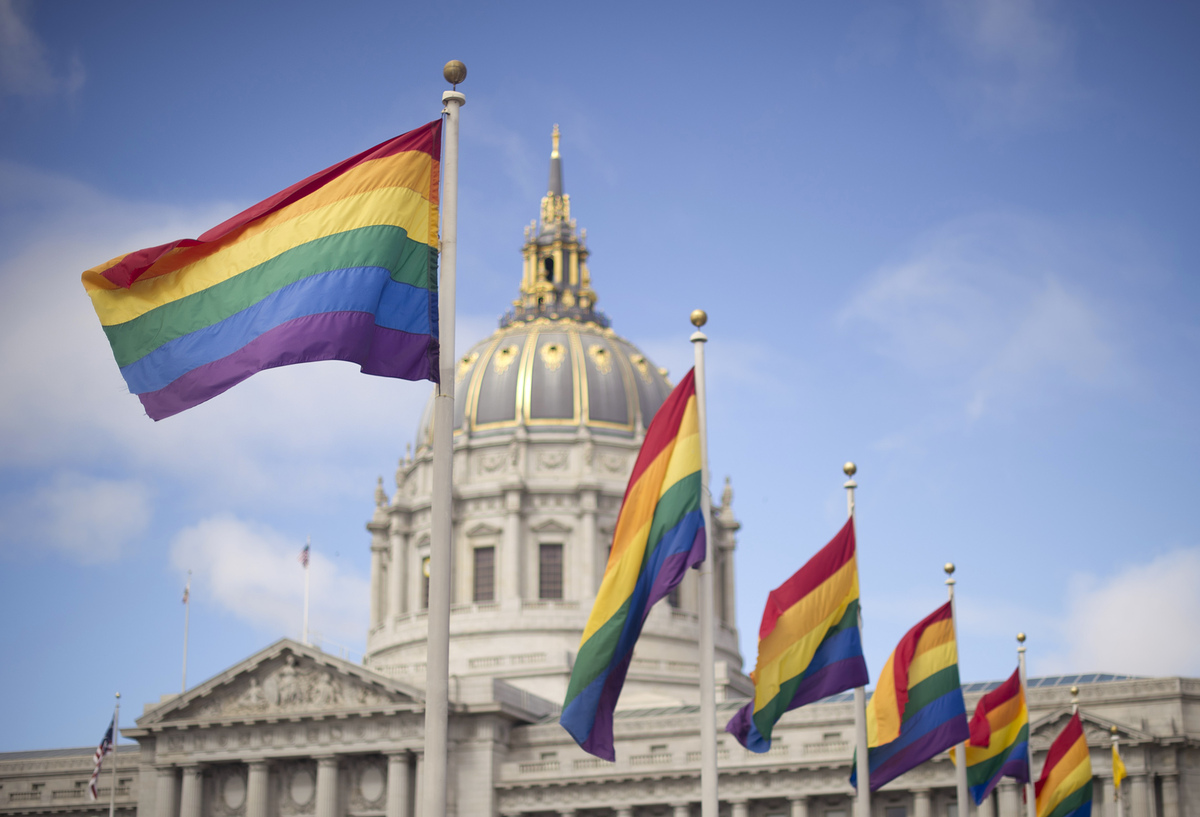 Rainbow flags fly in front of San Francisco City Hall in 2013 after the U.S. Supreme Court cleared the way for same-sex marriage in California.

Now there's a bid to declare that "the people of California wisely command" that gays and lesbians can be killed.

You read that right.

The "Sodomite Suppression Act," as proposed, calls sodomy "a monstrous evil" that should be punishable "by bullets to the head or any other convenient method."

The act would punish anyone who distributes "sodomistic propaganda" to minors with a $1 million fine, and/or up to 10 years in prison, and/or the possibility of a lifetime expulsion from California.

The proposal comes from a Huntington Beach-based attorney, Matt McLaughlin. He did not return calls for comment, and his voice mailbox is full.

Now maybe you're thinking there's no way such a blatantly illegal measure would ever be approved by California voters.

But here's the rub: We might get a chance to find out, because it appears that there's no legal way for state officials to stop the author of this proposal from collecting enough voter signatures to put it on the ballot.

Vikram Amar, a constitutional law professor at the University of California, Davis, said he is almost reluctant to even get drawn into the discussion "to give this guy the attention he wants."

Still, Amar noted there are at least two big issues at stake.

One, given that it costs only $200 to submit an initiative and start the signature-gathering process in California, perhaps the fee should be higher to discourage people from abusing the process. (On the other hand, that could make it prohibitive for legitimate grass-roots petitions to gain traction without well-off backers.)

Two, some advocate that the state attorney general, the official whose job duties include writing a title and summary for any proposed initiative, should have the authority to kill a proposal that would conflict with superseding law — like murder. (Of course, then elected partisan officials with their own political agendas would be the filters.)

But both of those ideas raise their own problems, Amar said.

"Anyone who has 200 bucks for an initiative, probably can raise 2,000 bucks," he said. "But raise it to something meaningful like [10,000] or 20,000 bucks, then you're sending a message about the accessibility of direct democracy." 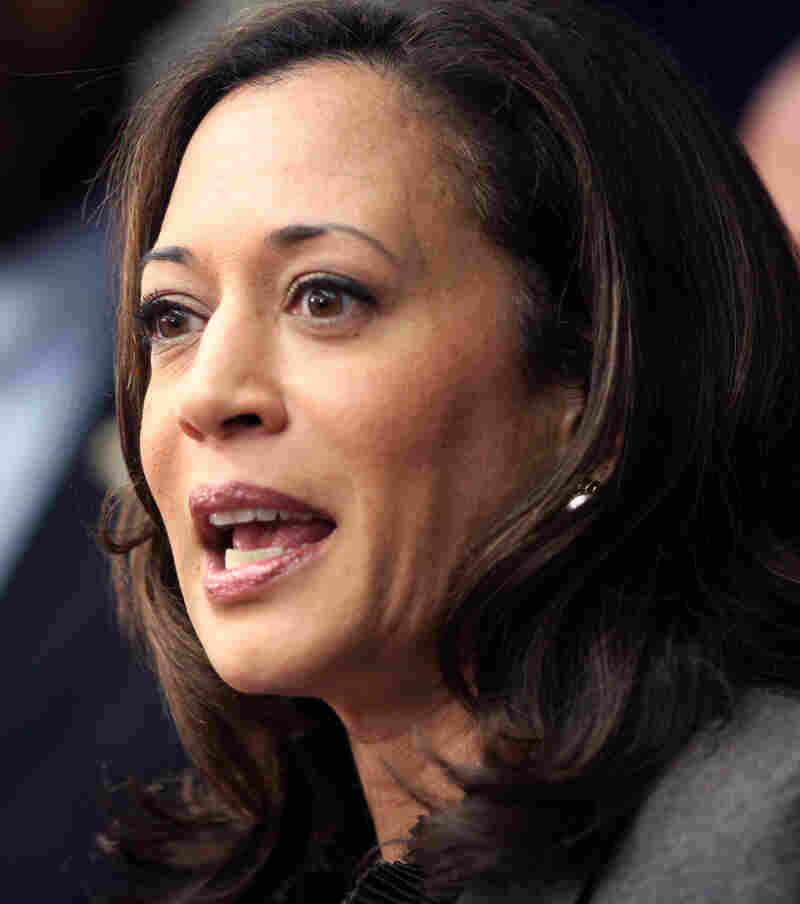 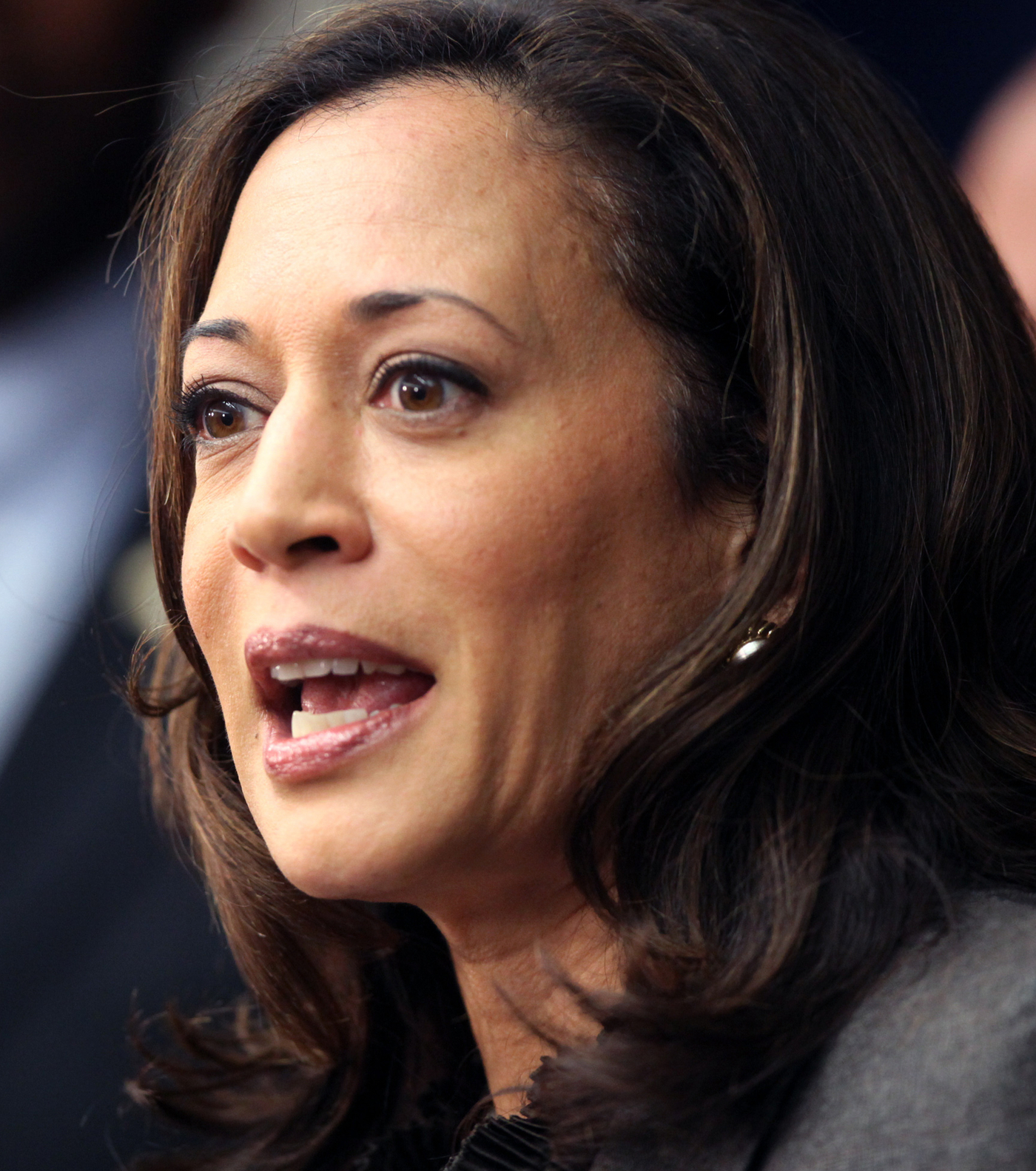 Kim Alexander, president of the California Voter Foundation, favors raising the fee, even though she said, "It won't stop people from submitting crazy ideas."

Like Amar, Alexander does not favor the idea of allowing an elected official, in this case Attorney General Kamala Harris, to block the measure outright by calling it illegal.

The initiative process "needs to be kept at arm's length from the Legislature and the politicians who frequently want to usurp its power," Alexander said.

The initiative's author has provoked discussion and controversy. In fact, there have been calls for McLaughlin to be disbarred for advocating murder.

It will take several million dollars more to get enough signatures for such a controversial idea, Amar contends.

"But if I get approached by someone asking me to sign this thing," Amar said, "that will spoil my day having to think about this guy."