Accessibility links
Fact Check: Hillary Clinton, Those Emails And The Law : It's All Politics A top Republican senator charged that Hillary Clinton "probably" broke the law with her use of private emails as secretary of state. But it's not likely to be so clear.

Fact Check: Hillary Clinton, Those Emails And The Law

Fact Check: Hillary Clinton, Those Emails And The Law 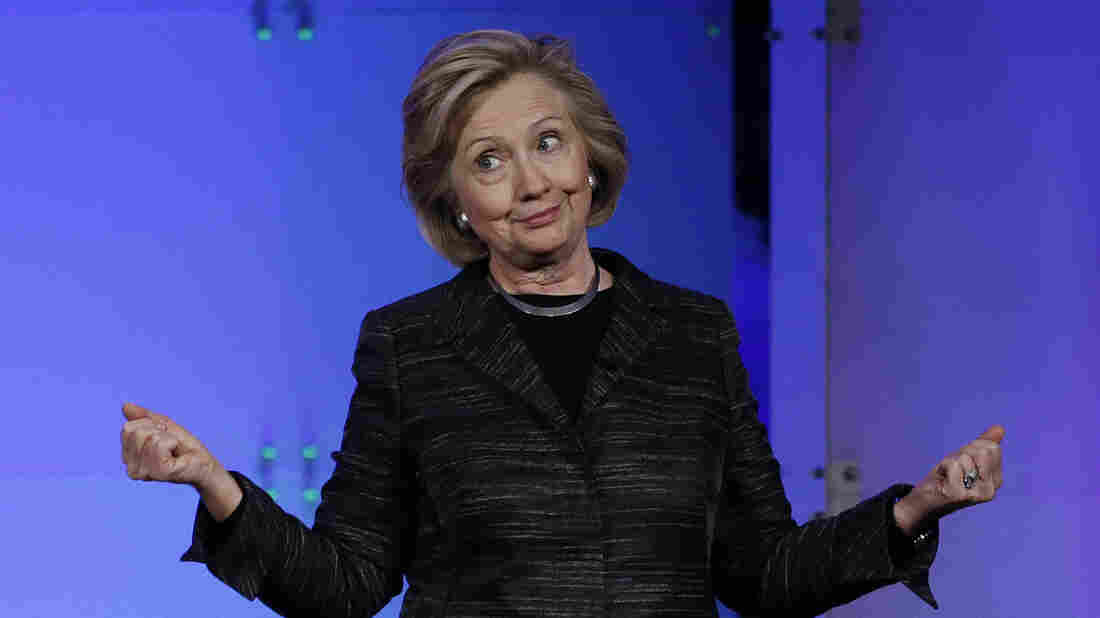 Hillary Clinton: "I took the unprecedented step of asking that the State Department make all my work-related emails public for everyone to see." Marcio Jose Sanchez/AP hide caption 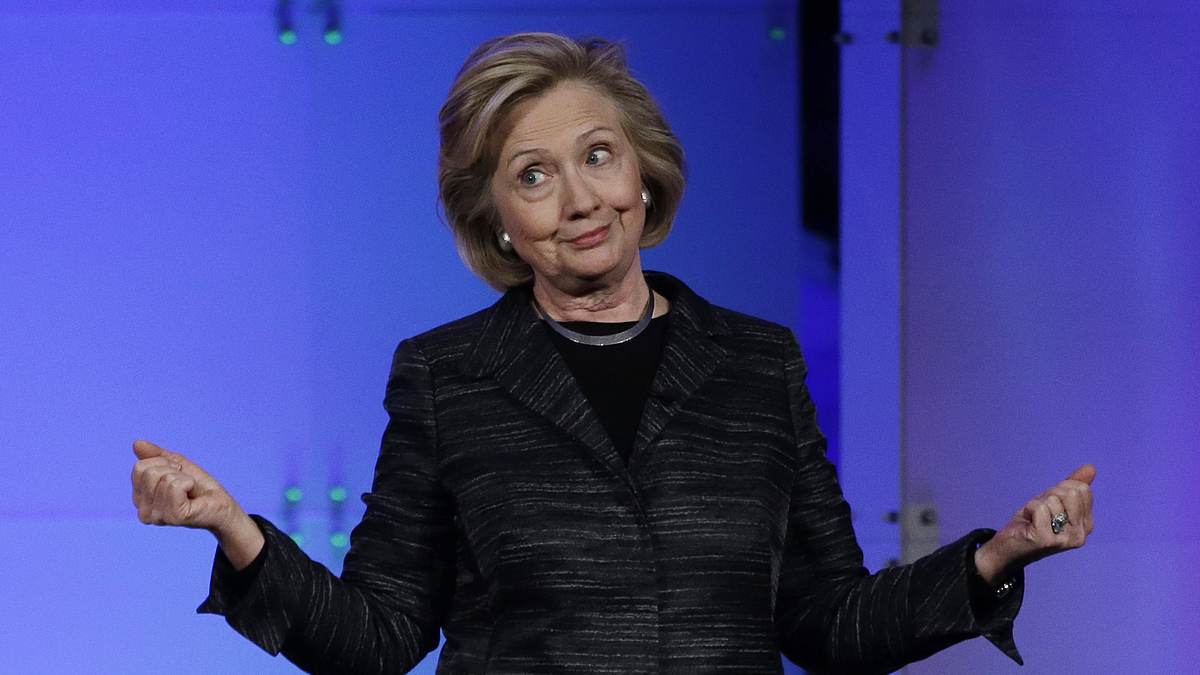 Hillary Clinton: "I took the unprecedented step of asking that the State Department make all my work-related emails public for everyone to see."

The chairman of the Senate Judiciary Committee — not just a rank-and-file House member — alleged Tuesday that Hillary Clinton likely broke the law with her use of private emails as secretary of state.

"I think they all fall into one great big mistake she made," Republican Sen. Chuck Grassley of Iowa told Newsmax before adding: "And it could be a violation of law, probably is a violation of law. Some people are suggesting she could even be prosecuted, and it's as simple as this — she was using a private email address instead of a government one, and it probably violates the Freedom of Information Act, it probably violates national security legislation." 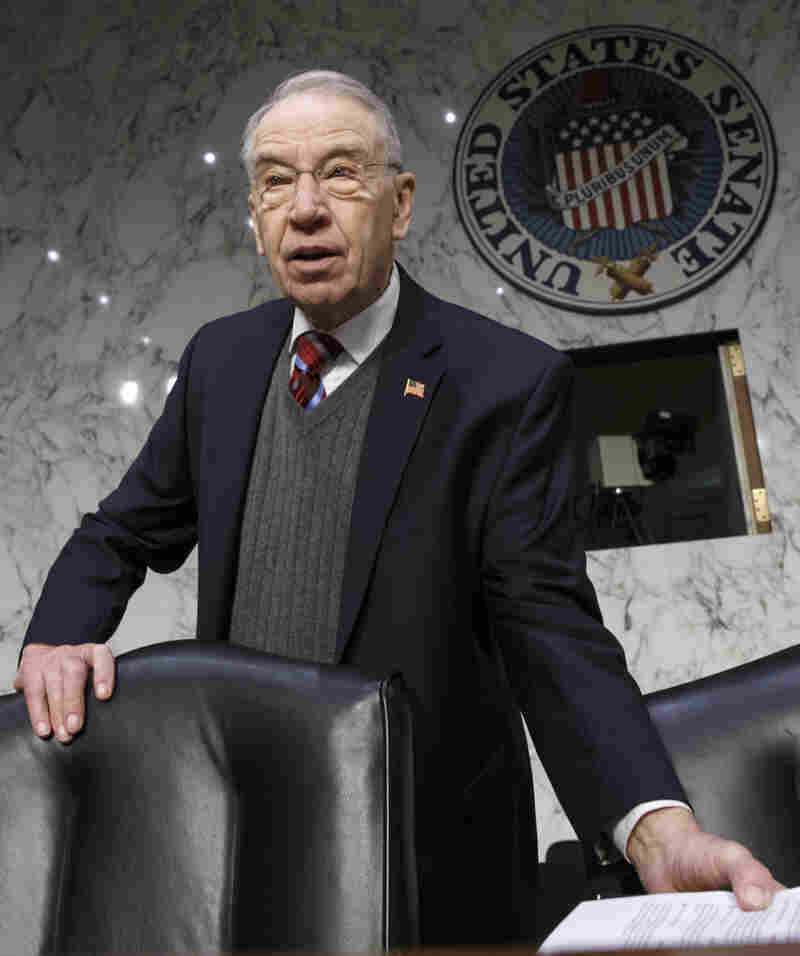 The charge of breaking the law, going around the law or being above it, is one Clinton is certain to face if she testifies before the House Select Committee on Benghazi led by South Carolina Republican Trey Gowdy.

At issue are four sections of the law: the Federal Records Act, the Freedom of Information Act (FOIA), the National Archives and Records Administration's (NARA) regulations and Section 1924 of Title 18 of the U.S. Crimes and Criminal Procedure Code.

Clinton did not use an official government email account while serving as the country's top diplomat. Instead, she used a private email account and kept all of her emails on a private server in her home. The server has been wiped clean, according to the Republican-led Benghazi committee.

At a news conference last month, she cited "convenience" as the reason. She said she did not want to carry around two mobile devices, though she acknowledged it "might have been smarter" to have done so.

Addressing the Federal Records Act, NPR's Scott Horsley reported last month on the question of whether Clinton's exclusive reliance on a private email account violated it. Here's some of what he reported:

"A State Department spokeswoman says Hillary Clinton did not break any rules by relying solely on her personal email account. Federal law allows government officials to use personal email so long as relevant documents are preserved for history."

The law was amended in late 2014 to require that personal emails be transferred to government servers within 20 days. But that was after Clinton left office. Watchdog groups conceded that she may not have violated the text of the law, but they argue she violated the spirit of it. The Sunlight Foundation's John Wonderlich explained to Horsley:

"[O]ur expectations for public service are [that] public servants use their official email accounts."

Wonderlich also found it ethically challenged, if not legally, for Clinton and her team to have been the filter for her emails:

"The final arbiter of what's public or what's turned over to Congress shouldn't be private staff working for Hillary Clinton. It should be State Department employees who are bound by duty to the public interest."

FOIA — You Can't Always Get What You Want

FOIA is intended to "foster democracy by ensuring public access to agency records and information" in a timely manner. Journalists often use the law to procure public documents. The process can be a cumbersome one, and depending on the sensitivity of the information, much of the information may be redacted.

In Clinton's case, she says she turned over some 30,000 relevant emails, totaling 55,000 pages, and wants those all made public. "I took the unprecedented step of asking that the State Department make all my work-related emails public for everyone to see," Clinton said at her news conference on the emails last month. (Gawker Media and The Associated Press have announced they are suing to have a Clinton spokesman's and Clinton's emails released.)

Clinton was the filter for what was relevant to work and what was not. Of course, before electronic communication, federal records were routinely filtered by individuals, who sorted their papers before handing over boxes to archivists. And, many federal workers, Capitol Hill staff, etc., use personal email accounts — in addition to their official accounts — and choose what, if anything, is turned over from those.

Nonetheless, Dan Metcalfe, who was the head of the Justice Department's Office of Information and Privacy from 1981 to 2007, blasted Clinton in an op-ed in Politico. He said what was "unprecedented" actually was Clinton's exclusive use of private email and her own Internet service provider in lieu of an official account "so that the records of her email account would reside solely within her personal control at home."

That means "she managed successfully to insulate her official emails, categorically, from the FOIA, both during her tenure at State and long after her departure from it — perhaps forever." He called that "a blatant circumvention of the FOIA by someone who unquestionably knows better."

But was it "probably ... a violation of law," as Grassley charged?

The Justice Department weighed in, calling it "sheer speculation" that "Clinton withheld any work-related emails from those provided to the Department of State." What's more, Justice wrote, "FOIA creates no obligation for an agency to search for and produce records that it does not possess and control."

In fact, the department refers to a past fight over former Secretary of State Henry Kissinger's notes, as Josh Gerstein points out. Notes and tapes of Kissinger's conversations were sent to the Library of Congress — rather than leaving them to the State Department — restricting their public access. FOIA requests were denied by the State Department because they were under the aegis of the Library of Congress. Kissinger declined to turn the documents over to archivists' requests.

What's more, the Supreme Court held that the Kissinger documents did not have to be turned over under FOIA — even though they were notes taken while Kissinger was at State — because State did not have possession of them.

Then-Chief Justice William Rehnquist, writing for the majority in 1980:

"We hold today that, even if a document requested under the FOIA is wrongfully in the possession of a party not an 'agency,' the agency which received the request does not 'improperly withhold' those materials by its refusal to institute a retrieval action. When an agency has demonstrated that it has not 'withheld'requested records in violation of the standards established by Congress, the federal courts have no authority to order the production of such records under the FOIA."

The National Archives is where all government records eventually end up. There are several Archives rules and regulations that have been updated since Clinton left office. For example, it is now more explicit about guidance for use of personal email.

Still, the use of private email and, even further, a private email server certainly limits Archives' call for "ready retrieval of electronic records," records that are "readily found when needed" and are easily scrutinized by Congress.

During Clinton's news conference last month, she was asked if she was aware of the security implications of using her own email. Clinton answered this way:

The day after Clinton's news conference, the New York Times reported, quoting a former State Department official, that it "seemed unlikely" that Clinton didn't email at least something classified.

"A former senior State Department official who served before the Obama administration said that although it was hard to be certain, it seemed unlikely that classified information could be kept out of the more than 30,000 emails that Mrs. Clinton's staff identified as involving government business.

" 'I would assume that more than 50 percent of what the secretary of state dealt with was classified,' said the former official, who would speak only on the condition of anonymity because he did not want to seem ungracious to Mrs. Clinton. 'Was every single email of the secretary of state completely unclassified? Maybe, but it's hard to imagine.' "

The bottom line is this: No one will likely ever know what was deleted from Clinton's server. Barring one of the 30,000 emails Clinton turned over to the State Department being deemed "classified," it's also unlikely she will ever be found to have violated the letter of the law.