Accessibility links
Fights Over 'Religious Freedom' And Gay Rights Are Costing Republicans : It's All Politics The party and its leading 2016 contenders are finding themselves between a rock and hard place because of Indiana's and Arkansas' recently amended laws.

Fights Over 'Religious Freedom' And Gay Rights Are Costing Republicans

Fights Over 'Religious Freedom' And Gay Rights Are Costing Republicans 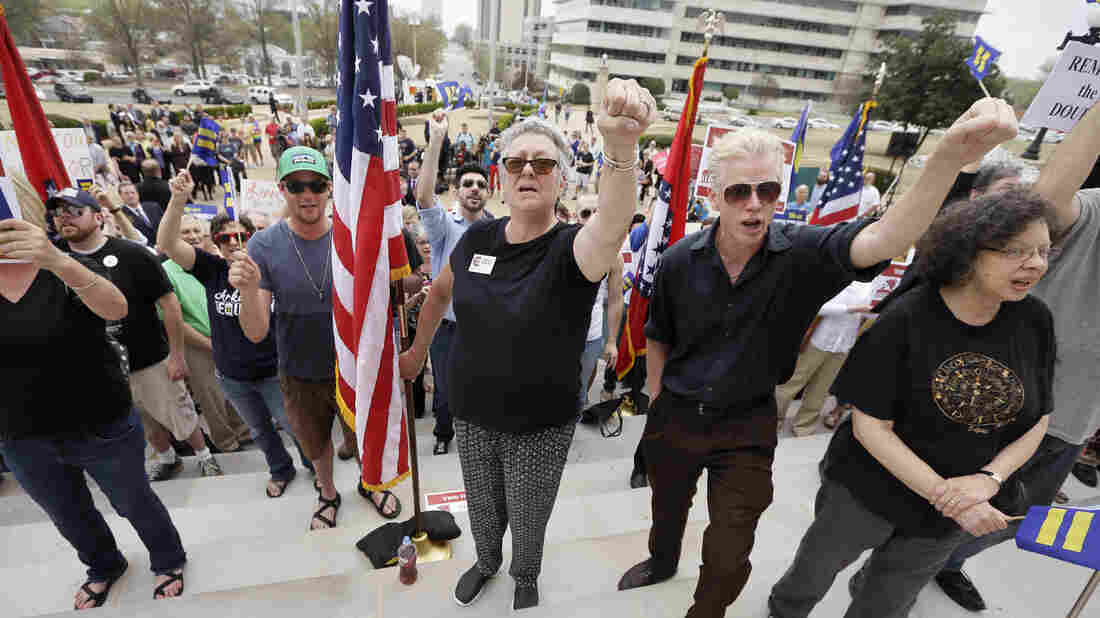 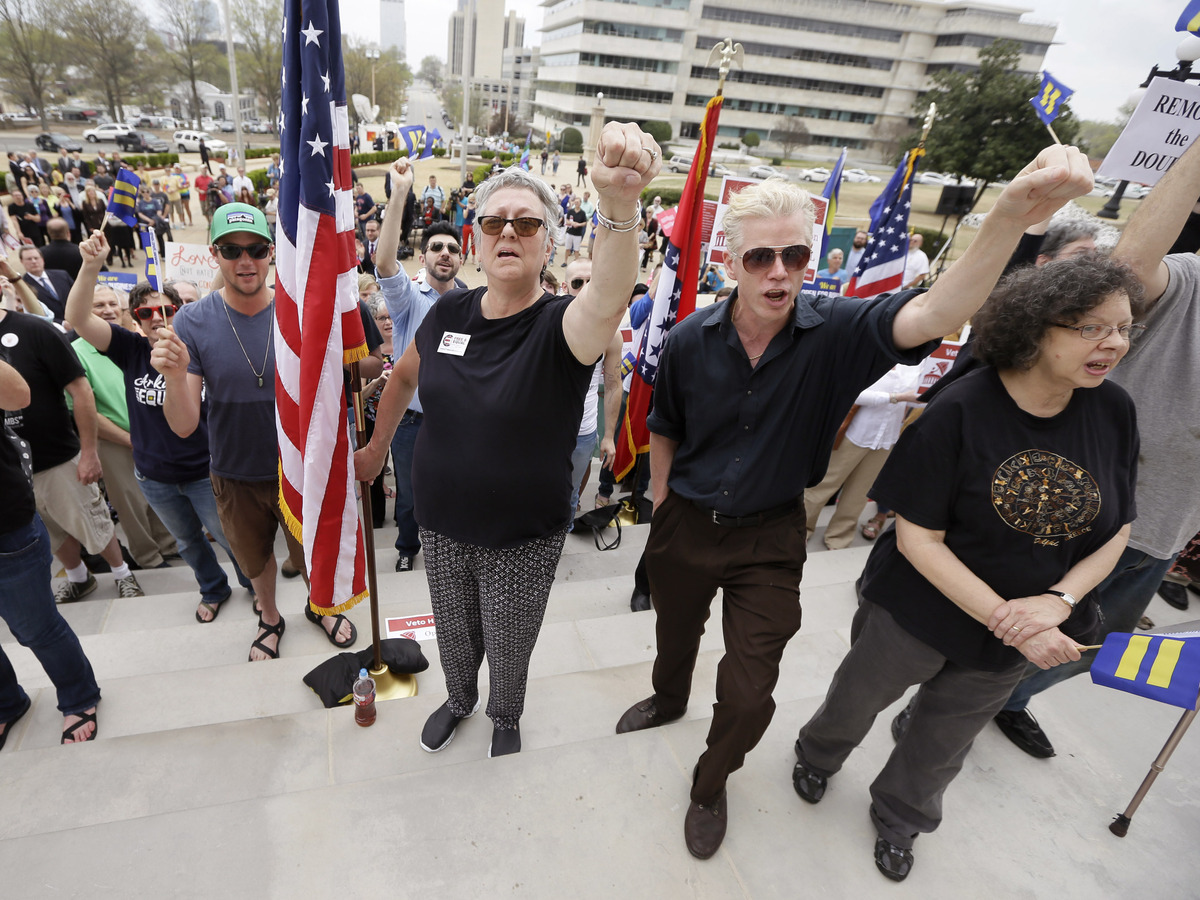 Opponents of an Arkansas religious objection measure chant outside the Arkansas state Capitol on Wednesday.

Following a firestorm of criticism, Republican governors in Indiana and Arkansas signed revised versions of their states' Religious Freedom Restoration bills Thursday night. In Indiana the language was adjusted, and in Arkansas it was significantly scaled back to more closely align with the federal law.

National Republicans, especially the ones running for president, have to hope it's enough to get them out of the hole they dug themselves on religious freedom and gay rights. It's worth taking a look at what the whole brouhaha has cost the GOP.

In the spirit of Passover, here are four questions about what this issue means for the GOP:

1) Why didn't Republicans anticipate this firestorm?

It's possible that Republicans' big electoral victories in November blinded them to just how controversial this would be. Gov. Asa Hutchison, R-Ark., and Gov. Mike Pence, R-Ind., seemed genuinely taken aback by the demand for boycotts and the backlash from big corporations like Eli Lilly, WalMart and Apple, as well as the NCAA.

It's as if Republicans — particularly in the deep-red states of Arkansas and Indiana — operate according to a different political calculus, insulated from the divide between their own conservative constituents and changing national opinion. Because of redistricting and the phenomenon of a midterm electorate that leans a lot more Republican than a presidential-year electorate, there are now many more GOP governors and many more conservative majorities in state legislatures. And those majorities are moving forward with an agenda that satisfies their base of social conservatives but is seen as intolerant and divisive by the business community and a growing majority of voters in the country. This week, those two opposing dynamics reignited the culture war, with Republican politicians as the first casualties.

2) Is this about more than just religious freedom?

Yes! It's about a much bigger, much more fundamental problem for the GOP. A new Pew poll showed that 61 percent of young Republicans favor gay marriage. Hutchinson said his own son signed a petition asking him to veto the bill that he instead sent back to the Legislature for revision.

The Republicans can't appeal to young voters if they're on the wrong side of gay marriage, because gay rights is a symbol of tolerance for so many young voters — not to mention suburban women. The same is true for one of the fastest-growing parts of the electorate — Hispanics. How do Republicans show Hispanics that they are welcoming and inclusive if they oppose a path to legalization for hard-working immigrants here illegally?

The views of the GOP's white, older, conservative primary electorate are farther away from the center of American public opinion than the Democratic base is right now. That's the challenge for the GOP — it needs to project an image of tolerance in order to win the White House while at the same time satisfying its conservative base, which, in this case, wants Christian florists, bakers and photographers to have the right to refuse services to gay weddings. It will take a very talented candidate to square that circle.

3) OK, so how will Republican candidates resolve this larger tension?

Good question! The debates during the primaries will, presumably, reveal the answer.

Of all the GOP presidential hopefuls, Jeb Bush has given this the most thought. He seems determined not to fall into the trap that Mitt Romney did in 2012 — moving so far to the right during the GOP primaries (remember "self deportation"?) that he couldn't make it back to the center to win the general election.

Bush has said his strategy is to run as if he's willing "to lose the primary in order to win the general."

4) How's that working out for Jeb Bush so far?

Not so great. All the leading Republican presidential hopefuls, including Bush, came out in favor of the Arkansas and Indiana bills. By Wednesday, though, Bush was backtracking, insisting that religious freedom is a core value but that we also shouldn't discriminate based on sexual orientation.

Bush didn't explain how he would balance those two values, only that he was sure Indiana would "get to that place."

So, for Bush, the "lose the primary" strategy sometimes means sticking to his principles in opposition to the GOP base (as he has on immigration reform and Common Core education standards) but sometimes, on issues like religious freedom, he seems to fuzz it up.

What The 2016 Hopefuls Are Saying About Indiana's 'Religious Freedom' Law

Meanwhile, Sen. Ted Cruz, R-Texas, has no doubts about what side he's on. In Iowa on Wednesday, Cruz blasted the "big business" wing of the GOP, saying they are "running shamelessly to endorse the radical, gay marriage agenda over religious liberty. "