Accessibility links
Can Libertarian Rand Paul Win A Republican Primary? : It's All Politics As Paul embarks on a presidential campaign, he doesn't fit into the mold of either party neatly. Especially on foreign policy, the Kentucky senator faces a challenge. 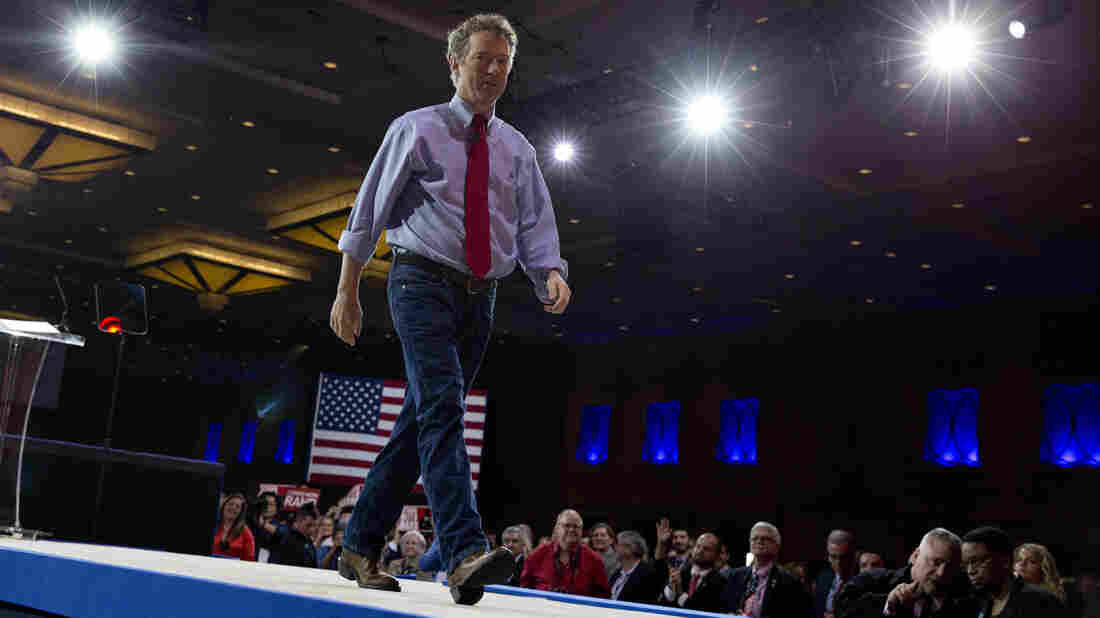 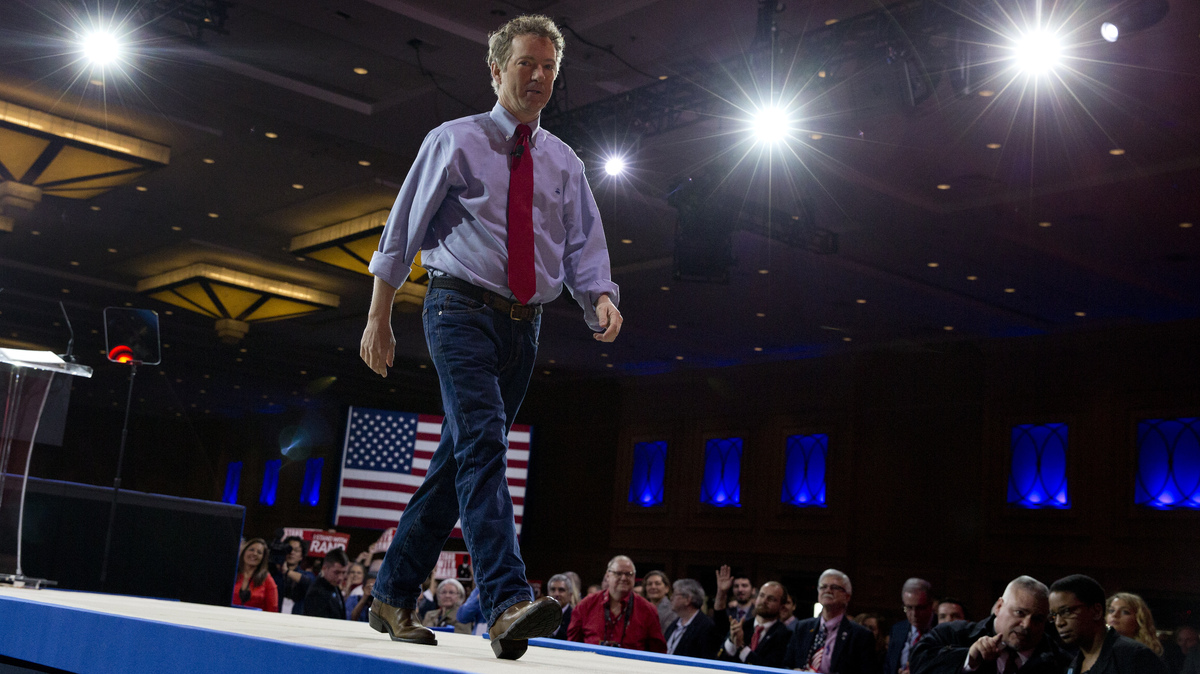 Sen. Rand Paul, R-Ky. walks from the stage after speaking during the Conservative Political Action Conference in February.

Rand Paul is not like other potential presidential candidates.

The Kentucky senator, who announced his candidacy for the White House on Tuesday morning, doesn't fit neatly into the molds of either party.

Socially liberal on issues of crime and punishment — especially when it comes to drug sentencing — against a federal ban on same-sex marriage, and no foreign policy hawk, he's not your prototypical Republican.

As a fiscal conservative and an opponent of abortion rights, though, he's certainly no Democrat either.

"It's time for a new way, a new set of ideas and a new leader," Paul says in a Web video, with a heavy metal soundtrack, previewing his presidential campaign.

Paul fits more with libertarians. And, though he is the scion of the last carrier of the torch of "liberty," he's also not quite his father's libertarian.

Paul's father, the former Rep. Ron, ran for president three times before retiring. The elder Paul, 79, was always regarded as something of a gadfly, an outspoken fresh voice in the Republican primary with a passionate following of young libertarians.

Though Paul did not win a single state in 2008 or 2012, when measured by Election Day voting percentage, he routinely finished in the top three. In fact, he finished a solid second behind Romney in the critical early state of New Hampshire. 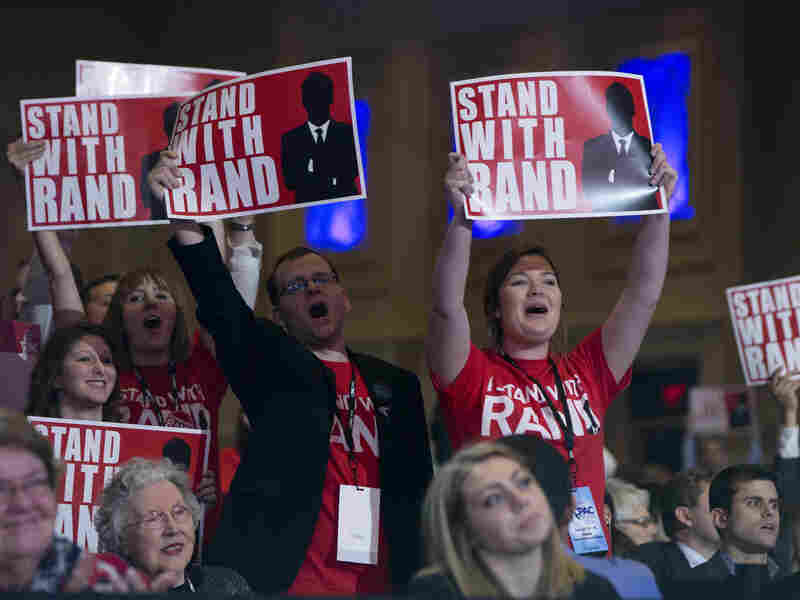 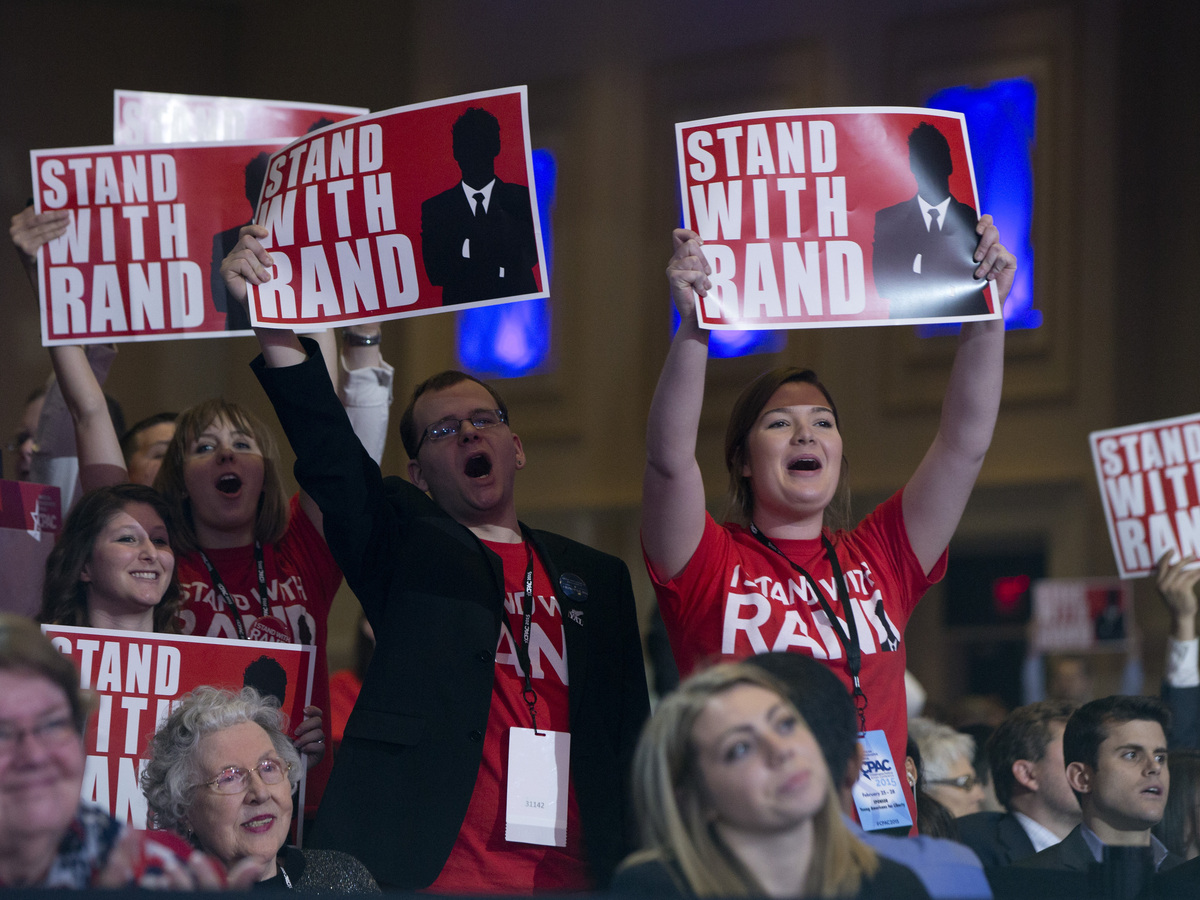 Supporters of Sen. Rand Paul cheer as he speaks during CPAC.

But his band of young, engaged and determined Paul-ites proved one thing — they could organize. Ron Paul not only won straw poll after straw poll at the Conservative Political Action Conference and elsewhere, he also won the most delegates in several states, including Iowa. Though Paul finished third in vote total in the Hawkeye State, his campaign engineered what amounted to a takeover of the state Republican Party apparatus.

"He has a number of assets," said Stu Rothenberg, founder of the Rothenberg Political Report. "He has terrific fundraising potential. He has an army of supporters who will run into a burning building to vote for him."

Rand Paul has tried to use those supporters to help build on his father's foundation, reaching out to minority voters with an emphasis on criminal justice reform and to young audiences — like one in New Hampshire last year — with an appeal based on privacy and civil liberties.

"If I had to fill a large lecture room at my campus, I would bet a lot that Rand Paul could fill that room with young libertarian-minded conservatives," said Dante Scala, a political scientist at the University of New Hampshire. "Of that I have little doubt."

Though Rand Paul can fill a room with young libertarians in similar ways that his father could, he isn't a carbon copy of his dad. Paul has adjusted some of his policies to fit the mainstream of the GOP a bit better.

Paul has emphasized where he agrees with evangelical Christians on gay marriage, telling a group of pastors last month that the First Amendment says to keep government out of religion, not religion out of government. And, in moves that show he understands the GOP has returned to its hawkish roots since the rise of the self-declared Islamic State militant group, he has changed his tune on defense spending, proposing $190 billion more for the Pentagon. And the second day of his presidential rollout finds him in South Carolina — in front of the aircraft carrier, the U.S.S. Yorktown.

Those moves toward the mainstream of the party may lose Paul some diehard libertarians, but, says David Boaz of the Cato Institute, most libertarians are thrilled.

"I think Rand Paul is the most libertarian major presidential candidate that I can remember seeing," said Boaz, who's new book is called The Libertarian Mind, "so it tells you that there is a constituency that wants this more libertarian approach."

"Rand Paul is trying to find a balance that reflects his own views and appeals to a plurality and eventually the majority of the party," Boaz said. "To the extent that there is that constituency — skeptical of foreign intervention, skeptical of the surveillance state — he has that market in the Republican Party all to himself. Is it a big enough market? Well, that's what he's about to find out."

Paul's anti-establishmentarian campaign slogan for 2016 will be "Defeat the Washington Machine; Unleash the American Dream."

That little slant rhyme invokes the memory of Paul crusading against the "security state" on the floor of the U.S. Senate in an old-fashioned, 13-hour filibuster two years ago. But if the goal for Rand Paul in 2016 is to emerge as the anti-establishment alternative to, say, Jeb Bush, Paul has to become more than just the libertarian candidate, Scala said.

"He has to find a way to be more appealing to the mainstream of New Hampshire Republicans while keeping his appeal to his core vote, which I would describe right now as people who voted for his dad three years ago," Scala said. "That's the trick for Rand Paul."

Paul, just as his father did with online "money bombs," will likely be able to raise enough money to stick around for quite some time in the GOP primary. Analysts like Rothenberg are skeptical he will be able to pull off the improbable and become the Republican nominee, but Rothenberg wonders if Paul is laying the groundwork for a sea change within the party.