Accessibility links
5 Things You Should Know About Hillary Clinton : It's All Politics She started out as a Republican and hasn't driven a car since 1996. Here's what you may not know or just may not remember about the former secretary of state and first lady. 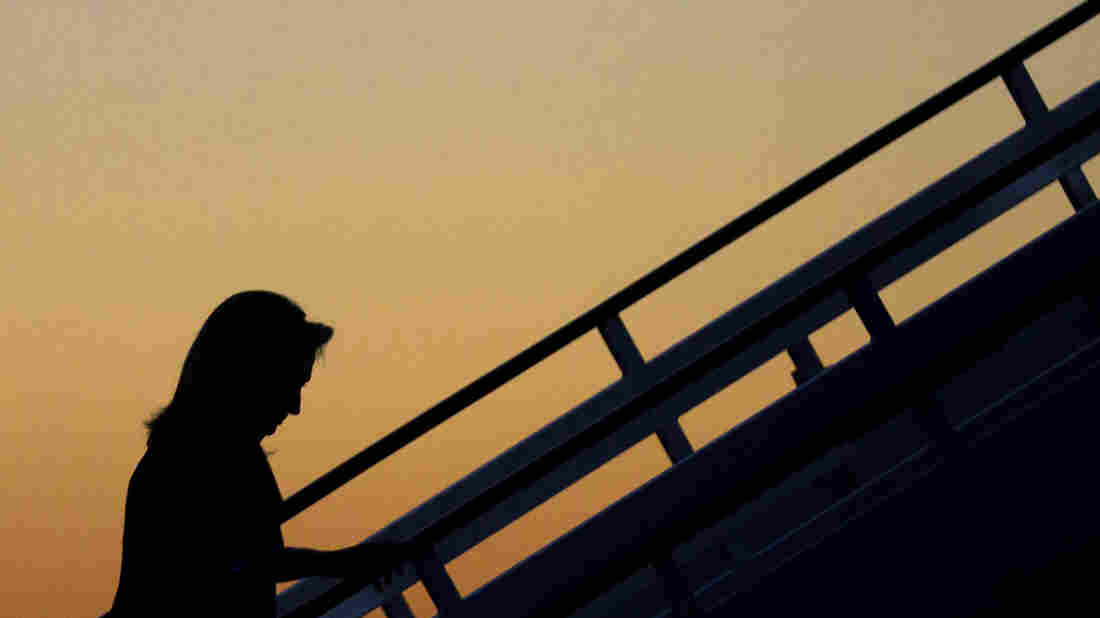 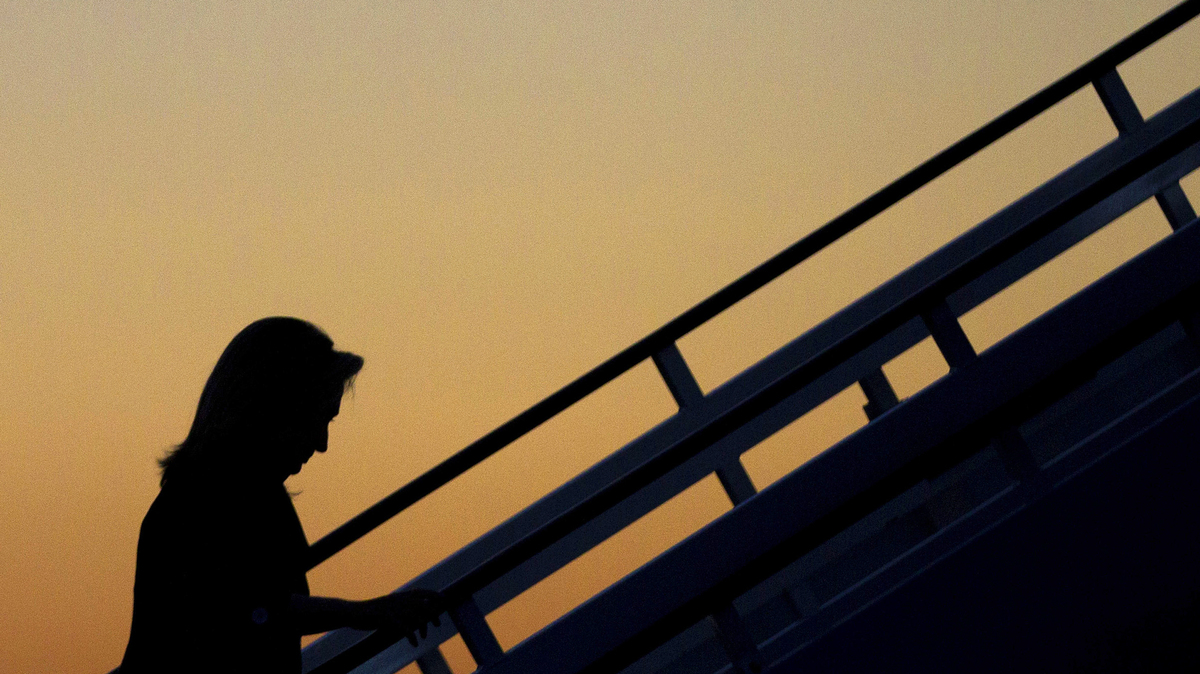 Many Americans have a pre-formed opinion of Hillary Clinton, who is expected to announce her candidacy for president this weekend. Call it a blessing — or, simply, an inevitable effect — of being in the public eye for so long. But Clinton has long implied that the public perception of her is all wrong.

"Well, as someone close to me once said, 'I'm probably the most famous person you don't really know,' " Clinton told NBC in 2007.

Eight years later, Clinton could probably make the same argument. So, here are five things about the front-runner for the 2016 Democratic nomination that you may not know or just may not remember.

1. She started out a Republican.

In high school, Hillary Rodham — who grew up in Illinois and was influenced by her die-hard Republican father and high school history teacher — considered herself a Republican and even became a Goldwater Girl. She wrote about it in her book Living History: 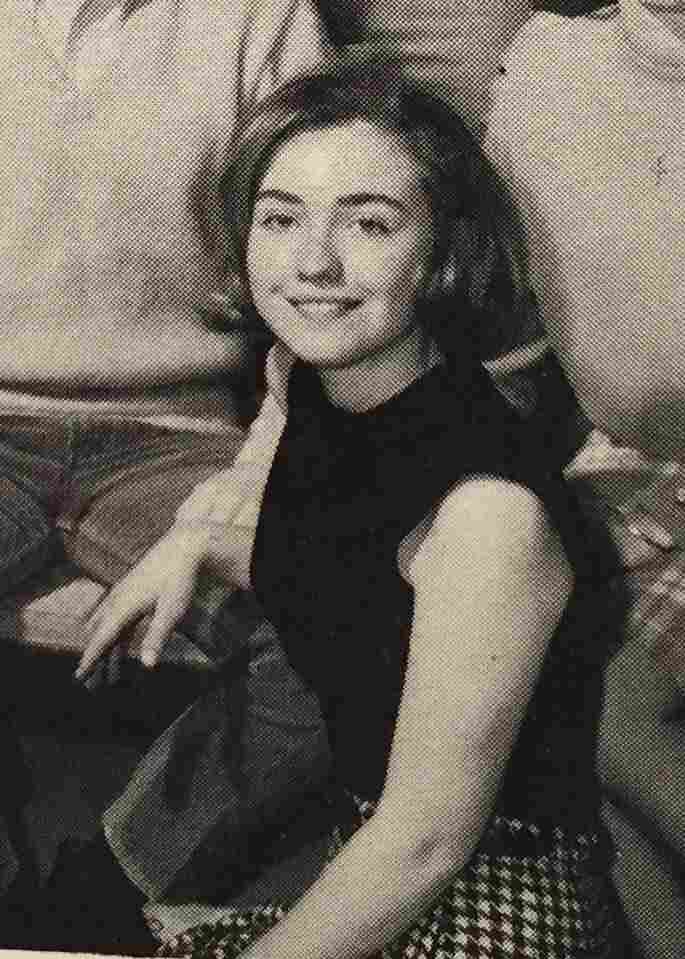 "I was also an active Young Republican and, later a Goldwater girl right down to my cowgirl outfit and straw cowboy hat emblazoned with the slogan 'AuH2O.'

"My ninth-grade history teacher, Paul Carlson, was, and still is, a dedicated educator and a very conservative Republican. Mr. Carlson encouraged me to read Senator Barry Goldwater's recently published book, The Conscience of a Conservative. That inspired me to write my term paper on the American conservative movement, which I dedicated 'To my parents, who have always taught me to be an individual.' I liked Senator Goldwater because he was a rugged individualist who swam against the political tide."

She also writes about volunteering to check voter registration lists against addresses to find voter fraud. And during her first year of college, she was even elected president of the Wellesley Young Republicans Club. According to Carl Bernstein's book A Woman In Charge, by the fall of 1966, she identified herself as a Rockefeller Republican. By the spring of 1968, though, she was volunteering for Democrat Eugene McCarthy's presidential campaign.

In 1992, while visiting her old high school in an affluent suburb of Chicago, she joked about her political evolution.

"I know I should answer the question that is on very many of your minds and that is: How did a nice Republican girl from Park Ridge go wrong?" she said to laughs.

2. In 1969, she became the first student (ever) to deliver a commencement address at Wellesley College.

The women's college didn't have a tradition of student commencement speakers. But by the time the class of 1969 was nearing graduation, an activist-minded student body demanded to have a student speaker to represent it at the ceremony. In Living History, Clinton writes about going to Wellesley College President Ruth M. Adams to discuss it: 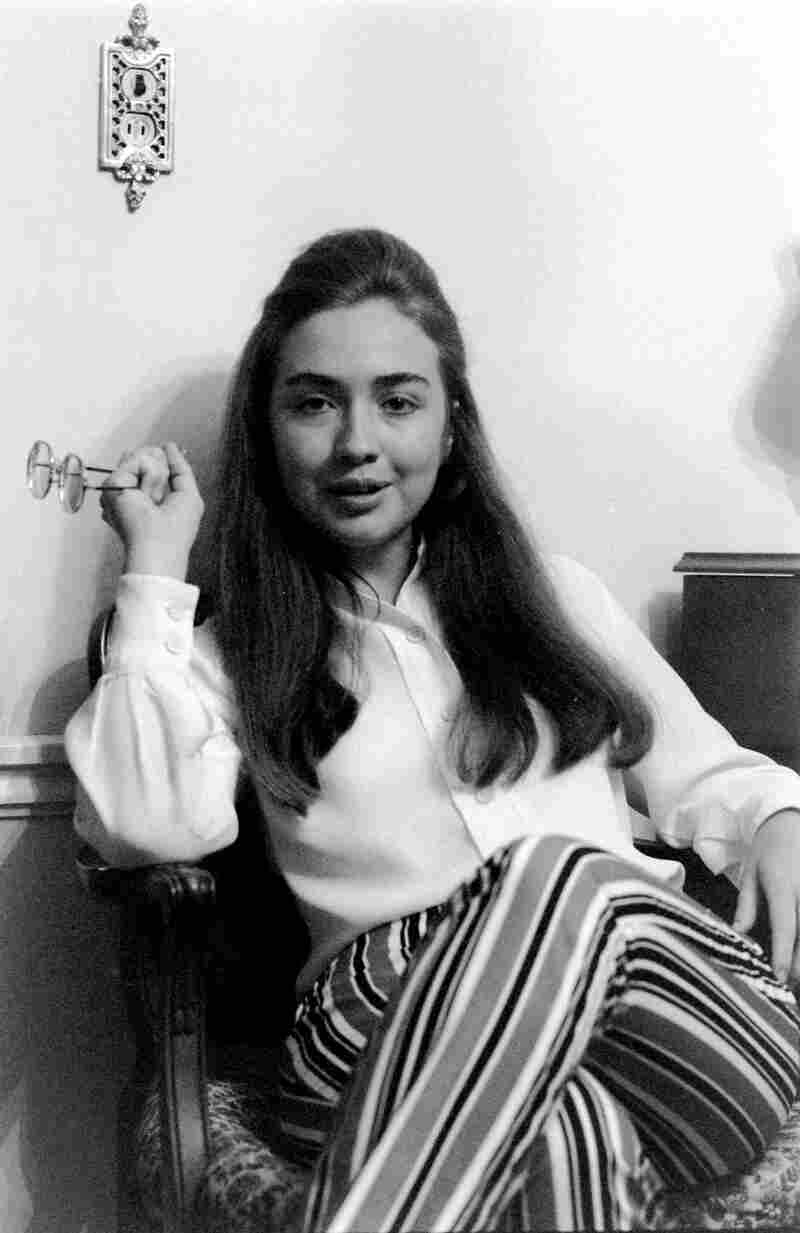 Hillary Clinton in June 1969 at the Rodham family home. She was featured in a Life magazine story called "The Class of '69." Lee Balterman/The LIFE Premium Collection/Getty Images hide caption 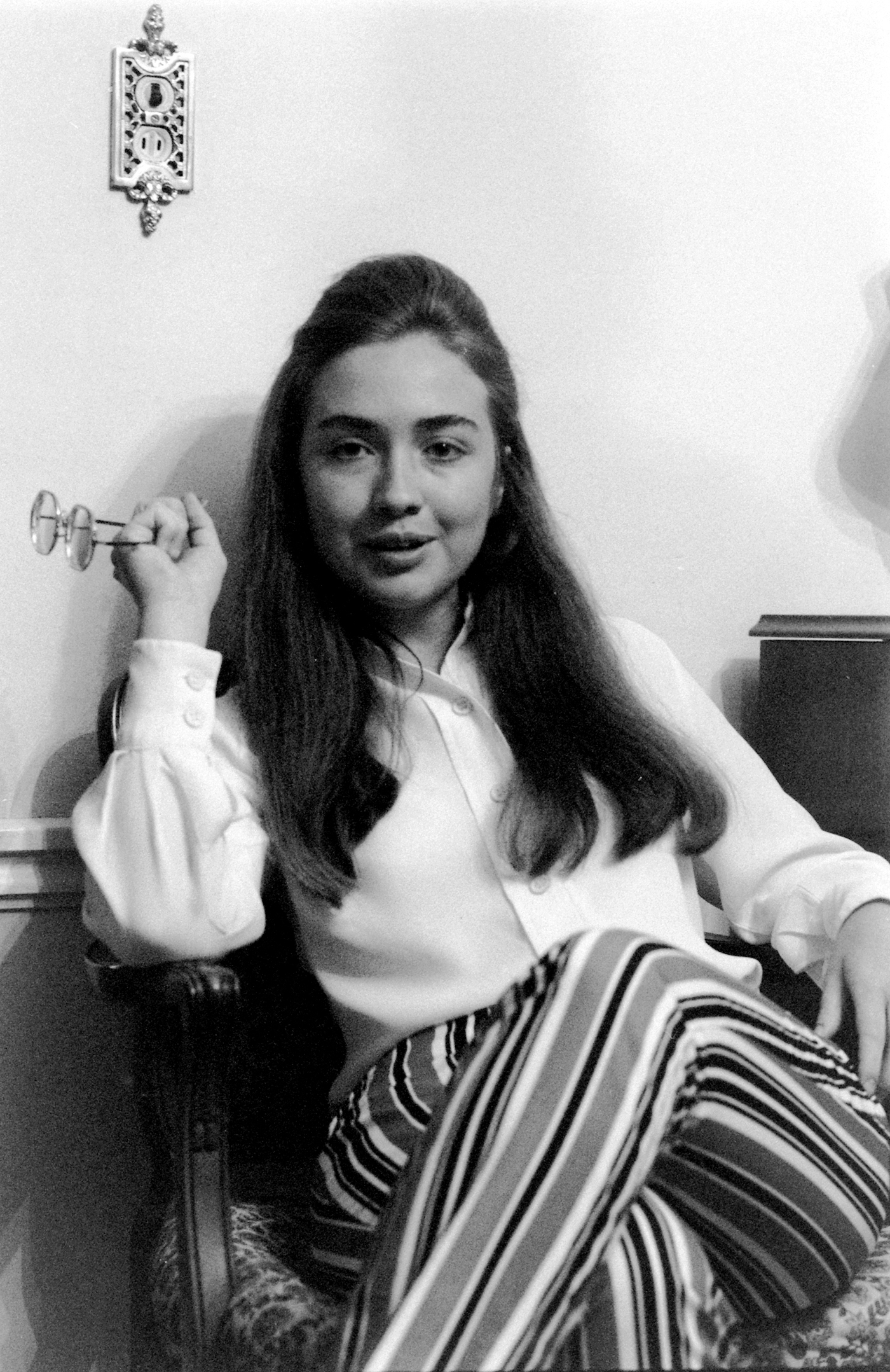 Hillary Clinton in June 1969 at the Rodham family home. She was featured in a Life magazine story called "The Class of '69."

"My friends' enthusiasm about my speaking worried me because I didn't have a clue about what I could say that could fit our tumultuous four years at Wellesley and be a proper send-off into our unknown futures."

In her introduction, Adams said, "There was no debate so far as I could ascertain as to who their spokesman was to be: Miss Hillary Rodham. Member of this graduating class, she is a major in political science and a candidate for the degree with honors."

Rodham was immediately preceded by Republican Sen. Edward W. Brooke from Massachusetts, and when she came to the microphone, she scrapped some of her prepared speech to respond to him, and said:

"We're not in the positions yet of leadership and power, but we do have that indispensable task of criticizing and constructive protest and I find myself reacting just briefly to some of the things that Senator Brooke said. This has to be brief because I do have a little speech to give.

"Part of the problem with empathy with professed goals is that empathy doesn't do us anything. We've had lots of empathy; we've had lots of sympathy, but we feel that for too long our leaders have used politics as the art of making what appears to be impossible, possible. What does it mean to hear that 13.3 percent of the people in this country are below the poverty line? That's a percentage. We're not interested in social reconstruction; it's human reconstruction. How can we talk about percentages and trends? The complexities are not lost in our analyses, but perhaps they're just put into what we consider a more human and eventually a more progressive perspective."

Her speech was reprinted in Life magazine and, for a time, Rodham became something of a voice of her generation. 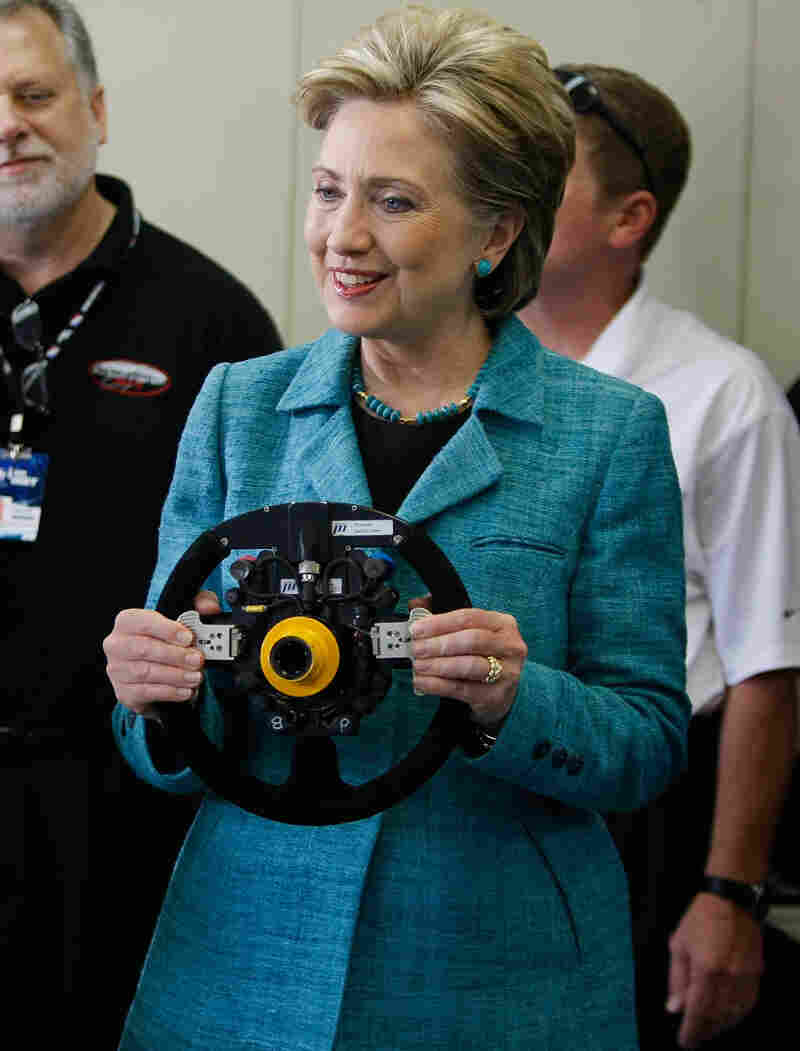 Hillary Clinton holds the steering wheel for the Indy race car of Sarah Fisher in 2008. Clinton says she hasn't gotten behind the wheel herself since 1996. Joe Raedle/Getty Images hide caption

Consider it a casualty of life in a Secret Service-protected bubble. President Obama has complained about it, as did President George W. Bush. Clinton told the National Automobile Dealers Association last year, "The last time I actually drove a car myself was 1996."

It's a reminder that Clinton has been living a very public life, in a closed-off way, for a very long time. No past presidential candidate has quite this sort of life experience. For Clinton's critics, this is just one of many signs (along with her comments about being "dead broke" when the Clintons left the White House) that she can't relate to regular voters. For Clinton's campaign, figuring out how to keep "the bubble" from getting in the way of meaningful interactions and normal experiences with voters presents a challenge.

4. Her commitment to women and girls goes way back.

Talking about so-called women's issues may be trendy these days, but Clinton has been working on these issues essentially her whole life. Some of this passion may have been driven by her own mother's difficult childhood.

When Clinton was in high school, she volunteered with her church youth group to baby-sit the children of migrant laborers. From there, her resume continues with one item after another aimed at improving the lives of women and children.

Here's an excerpt from her biography from the National First Ladies' Library and Historic Site:

"During her second year in law school, Hillary Clinton volunteered at Yale's Child Study Center, learning about new research on early childhood brain development, as well as New Haven Hospital, where she took on cases of child abuse and the city Legal Services, providing free legal service to the poor. Upon graduation from law school, she served as staff attorney for the Children's Defense Fund in Cambridge, Massachusetts."

In Arkansas, she co-founded the group Arkansas Advocates for Children and Families. And all of this was before she became first lady and secretary of state, both platforms she used to advance women's empowerment and the well-being of children worldwide.

In Living History, Clinton explained how her mother had been abandoned by her grandmother, writing, "I'm still amazed at how my mother emerged from her lonely early life as such an affectionate and level headed woman."

5. She has been dogged by controversies and scandals.

OK. You probably know this one already, but Clinton seems to have spent her entire public life fighting scandals.

"I could have stayed home and baked cookies and had teas, but what I decided to do was fulfill my profession," she said in 1992.

... to Whitewater, Travelgate and conspiracies about Vince Foster's suicide.

In the 1994 press conference below, she was asked about a number of the controversies swirling around her at the time. It is somewhat remarkable to watch the breadth of reporter questions, which went on for an hour and could have lasted longer.

Then there's Benghazi, and currently, "Servergate." Clinton once blamed her (and her husband's) "scandal problem" on a "vast right-wing conspiracy." No matter the cause, she has to be prepared for a campaign and possible presidency with more "gates" and "ghazis," because it has been that way for the past 25 years.