Accessibility links
Rubio's Path To The Nomination, And 3 Obstacles In His Way : It's All Politics The junior Republican senator from Florida is expected to jump into the race for the presidency Monday. He has some strengths — but also some hurdles to overcome. 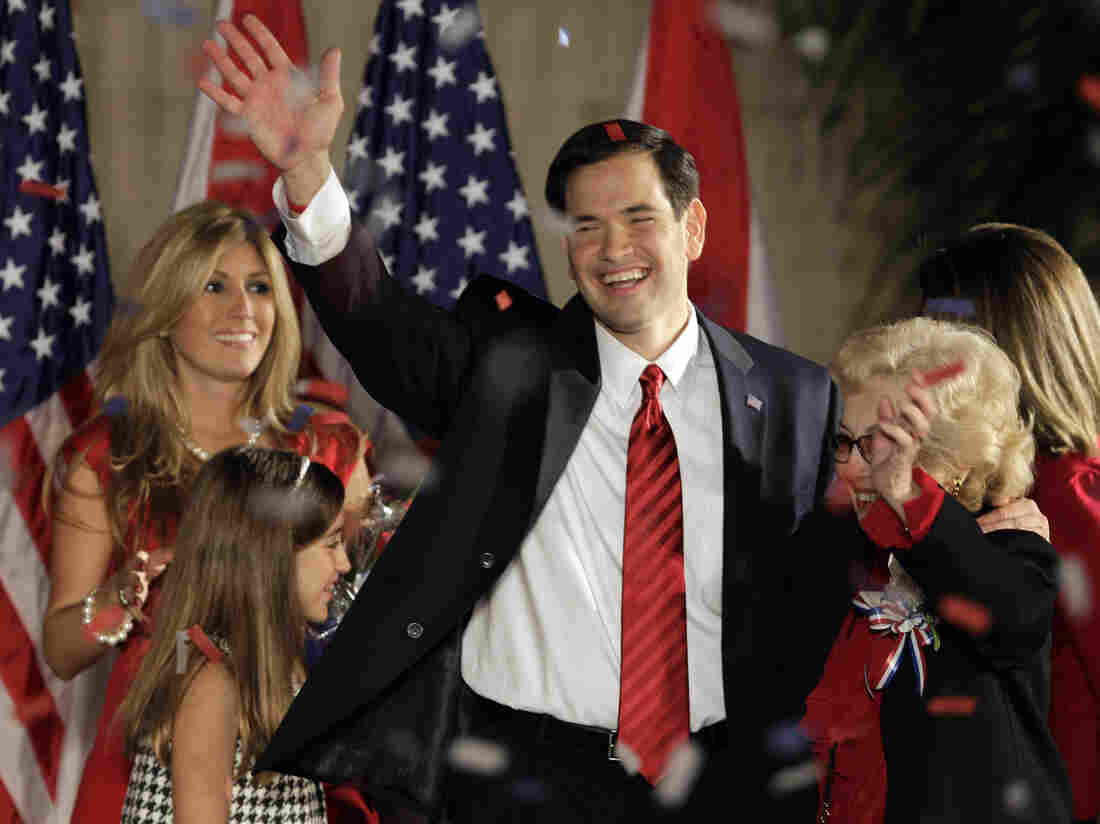 Marco Rubio celebrates onstage with his family in 2010 after winning his U.S. Senate seat in Florida when he was just 39 years old. Now, he's expected to embark on a run for president. Alan Diaz/AP hide caption 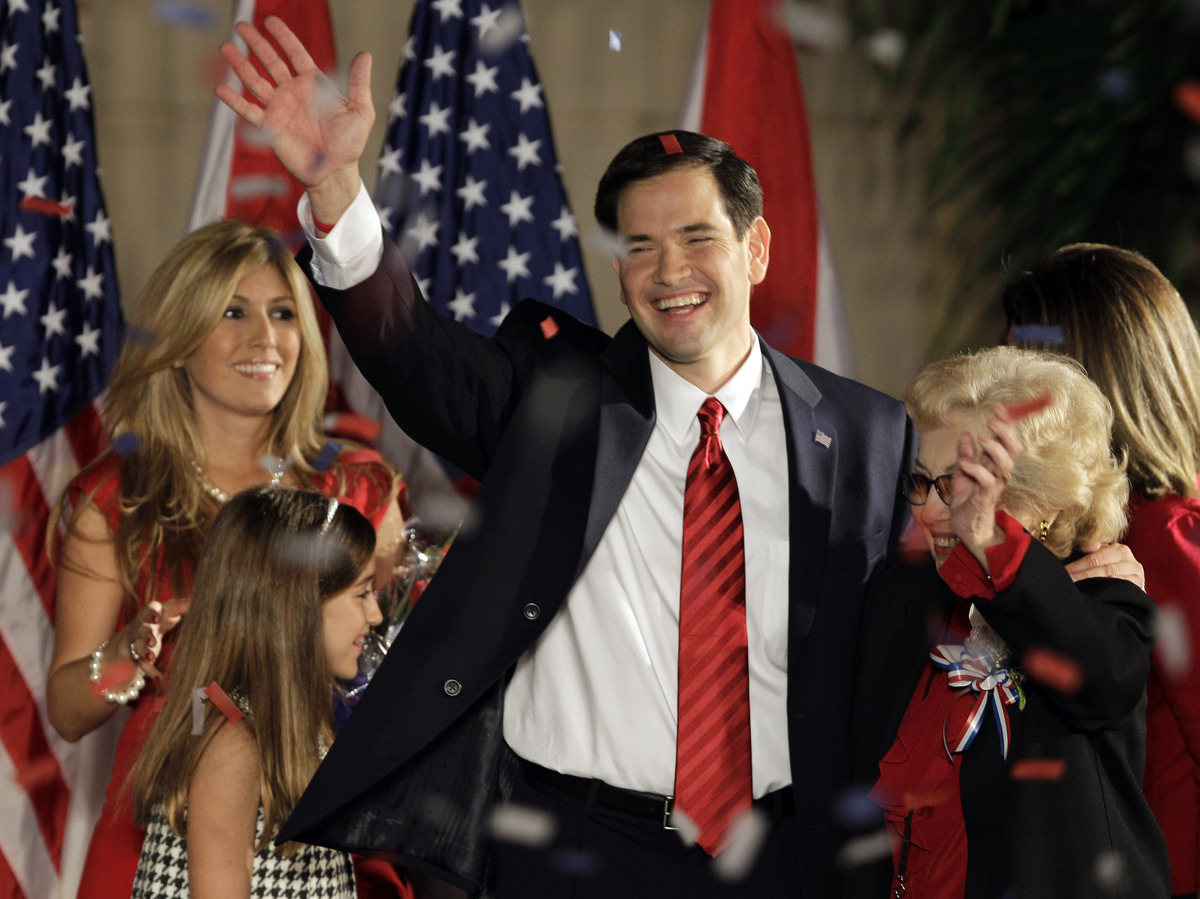 Marco Rubio celebrates onstage with his family in 2010 after winning his U.S. Senate seat in Florida when he was just 39 years old. Now, he's expected to embark on a run for president.

Marco Rubio, the charismatic, Hispanic, young (and even younger-looking) freshman senator from Florida is launching his campaign for the White House Monday in Miami.

That could change once he gets in. Rubio's advisers believe he has a path to the nomination, with assets few other candidates can match.

Right now, no single faction in the GOP is large enough to nominate its preferred candidate. In the past, in an open race, the "establishment" faction has always been able to nominate its man. Think Bob Dole, George W. Bush, John McCain, Mitt Romney. But this year the GOP is perhaps more fractured than ever with potentially two dozen candidates running.

Bush, the current candidate of Republican elites, is not as formidable a front runner as his brother George was in 2000, because he's not as acceptable to the other factions of the party. He doesn't scoop up evangelicals the way his brother did.

Rubio, though, his advisers say, is the candidate most acceptable to the broadest cross section of the party. A recent NBC News-Wall Street Journal poll, for example, showed Rubio was the candidate that more Republicans said they could see supporting than anyone else: 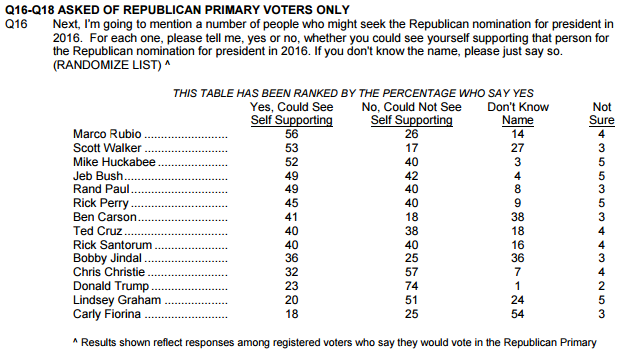 Then, according to this theory, Rubio will be able to appeal to the establishment, "governing wing" of the party as well as to Tea Party insurgents (who supported him in 2010). He's also acceptable to the foreign-policy hawks and, as a pro-life Catholic who's been outspoken on religious liberty laws, to social conservatives as well.

In the war of attrition that the crowded Republican primary may become, being everyone's second or third choice for a while might be enough. Rubio fans also say he has a ton of charisma — the most raw political talent of anyone in the race.

Now, for the cold water:

Every Republican in the race has a Bush problem, including Jeb, but Rubio's is unique. Jeb not only has an overwhelming financial advantage, but he's from Florida. So is Rubio. There's a lot of overlap in their network of donors, advisers and policy views. They even both check the Hispanic box. (Ba dum tss.)

Although there is a great hunger for generational change and for a new fresh face among Republican voters, in the post-Obama era there's also skepticism about first-term senators running for president. A lot of conservatives have misread the lesson of Obama — thinking that because one guy caught lightning in a bottle, everyone should go outside, bottle in hand.

Obama may have made it harder for candidates like Rubio, as well as Cruz and Paul, to be taken seriously on the Republican side. Their supporters would argue the opposite — that rank-and-file activists might be more open to someone with less experience post-Obama, because, "Hey, if Obama could do it ..." Nonetheless, Rubio will have to answer the criticism from the governors — with long records — in the race that he lacks a record of accomplishment.

Rubio made a huge political miscalculation after Romney lost the Hispanic vote to Obama by a 44 percent margin in 2012. Back then, Rubio agreed with many mainstream Republicans that the party needed to embrace comprehensive immigration reform.

He was one of the Gang of Eight that wrote the Senate immigration bill, which passed the Senate overwhelmingly, but then was roundly rejected by the Tea Party grass-roots. Rubio, once a Tea Party hero, looked like a turncoat to them.

Since then, he's backed away from comprehensive reform, saying the border has to be secured first. It's hard to tell exactly how much of the damage Rubio has been able to repair. His team would argue he's in good company, that many of the other candidates, either now or at some point in the past, supported a path to legalization — what the Tea Party calls "amnesty." But will he be able to sell that to the base after his high-profile support of the Senate bill?