Accessibility links
The Cat-And-Mouse Game Of The Great Clinton Chase, Iowa Edition : It's All Politics Hillary Clinton's campaign went to great lengths to keep her events in Iowa this week intimate. That's easier said than done when the candidate is one of the world's most famous politicians. 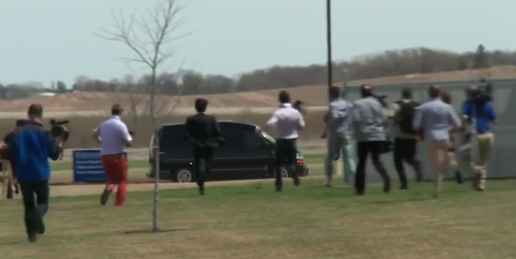 Editor's Note: This is a reporter's notebook from NPR's Tamara Keith, who is covering the Hillary Clinton campaign.

The e-mail from the Clinton campaign came late on Monday. Meet at the Panera Bread in Davenport, Iowa, at 9:45 in the morning. I was to be one of about a dozen reporters in a press pool given access to an unpublicized stop. What we quickly learned was that the restaurant was a decoy. The unannounced meet-and-greet was happening at a small coffee shop 20 minutes away in Le Claire. 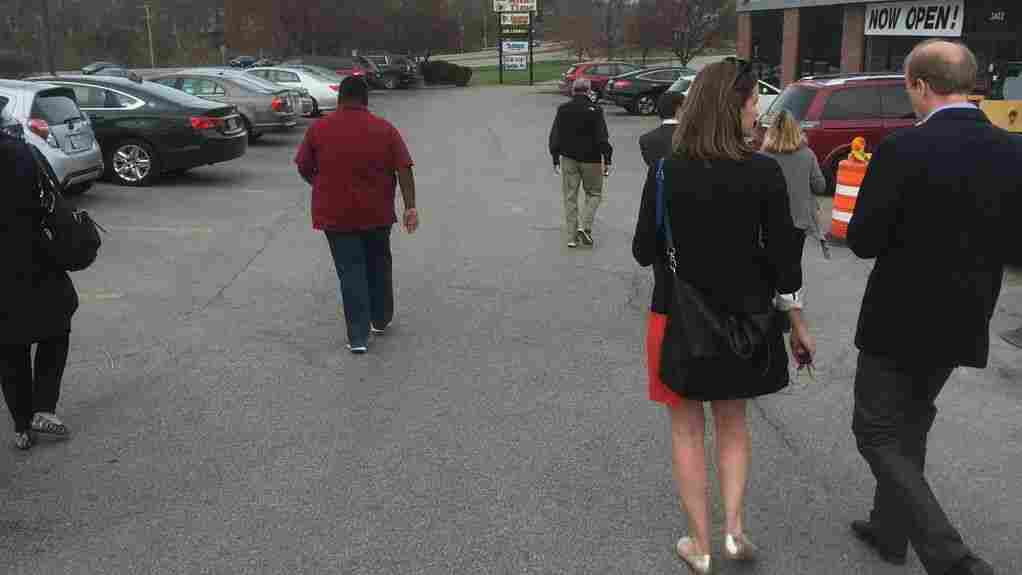 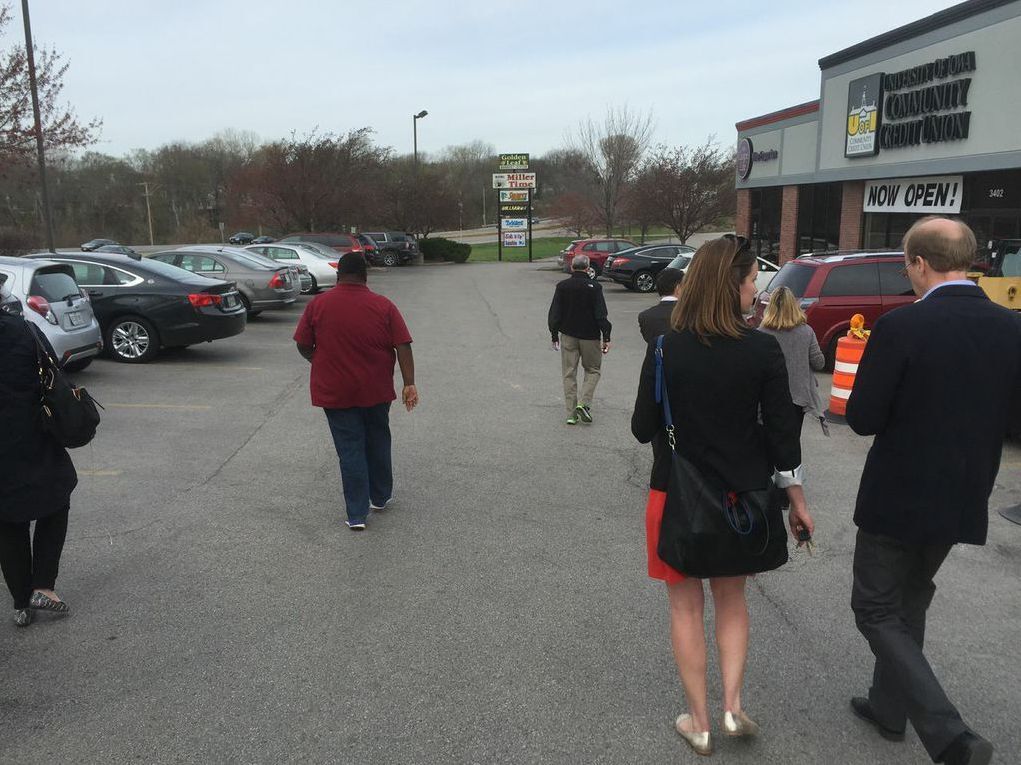 Reporters and campaign staffers rush to their cars to get to Hillary Clinton's first Iowa campaign stop.

So, we all jumped in our rental cars and dashed to the Jones Street Java House, where we packed into the kitchen waiting for the candidate.

One of the store's owners captured the absurdity of the whole thing when she snapped a selfie with the press throng as her backdrop.

When Hillary Clinton kicked off her campaign in Iowa, her team said she would be going small — intimate events, conversations in coffee shops with just a few people. That's easier said than done when the candidate is one of the world's most famous politicians.

When Clinton arrived, she walked up to the counter facing the tangle of reporters, who were really just a small share of those trying to cover her. 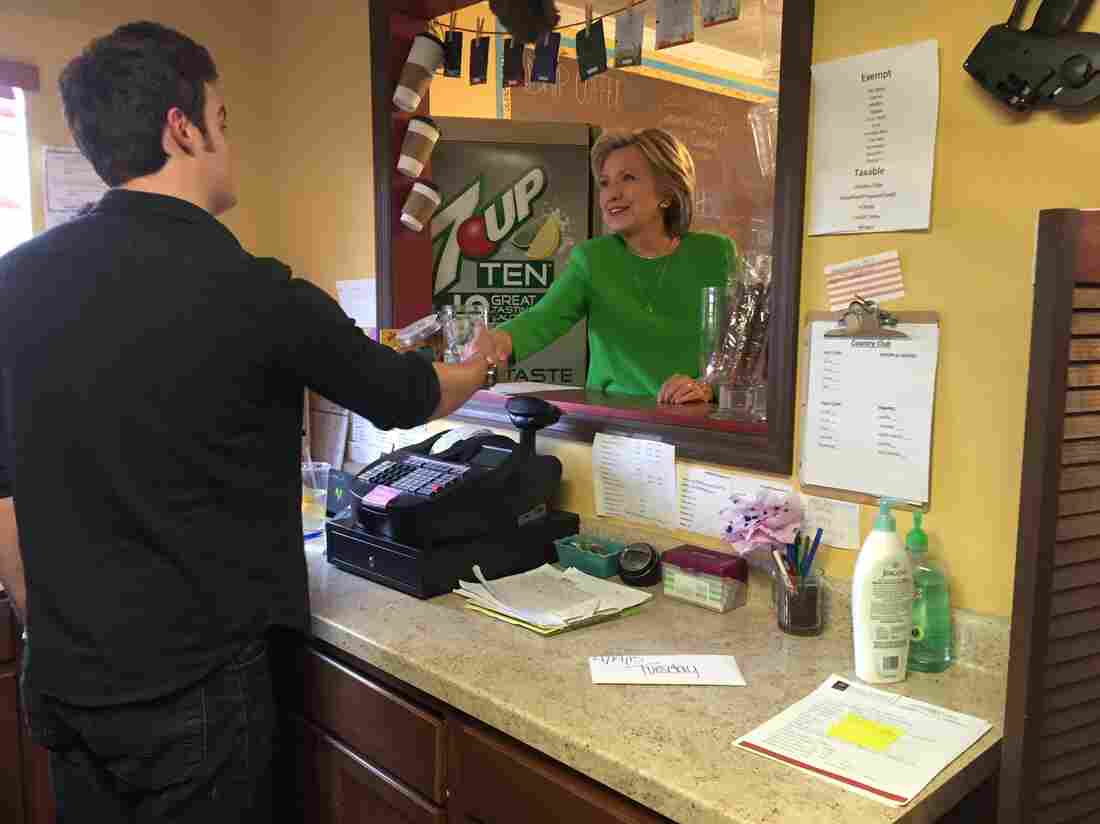 Hillary Clinton meets her barrista. She ordered a chai tea, a caramel latte and a water. Tamara Keith/NPR hide caption 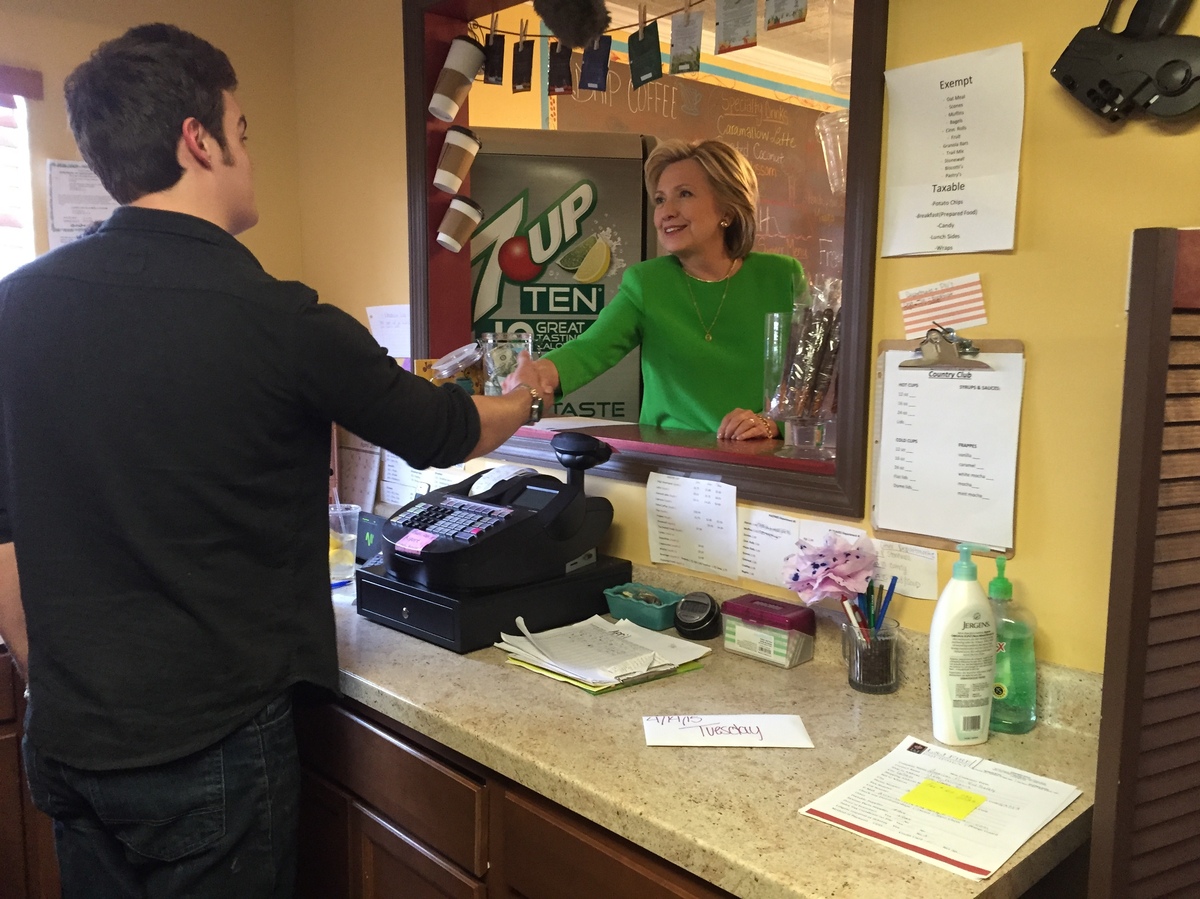 Hillary Clinton meets her barrista. She ordered a chai tea, a caramel latte and a water.

She shook hands with a few unsuspecting customers, and then sat down to chat with three invited guests. And that's about the time the press pool was kicked out.

So I can't tell you if they had a deep discussion about policy, or if one of her guests asked about the personal e-mail server she used while secretary of state. For the campaign, the point was simply to show Clinton relaxed and comfortable, chatting with Iowans, and for Clinton to get a chance to sit back, relax and hear from Iowans.

It turns out the reporters weren't the only ones given decoy locations. The Democratic activists, whom Clinton met with in cafes around the state, weren't told they would be meeting with her until the last minute. They turned over their cell phones before being taken to the meetings.

Such was the game of cat and mouse that characterized Clinton's return to Iowa. This was the campaign's effort to keep things small — to do Iowa the Iowa way.

"In order to have somebody like Hillary Clinton, who is huge, to be able to do that with these intimate settings, they really had to really make some compromises," said Kathie Obradovich, a political columnist for the Des Moines Register. "And one of them was not really telling everyone exactly where she's going to be. One of them was severely restricting the number of people who are in these events."

Reporters flew in from all over the country and around the globe. But because her events were in small venues, many of those reporters were left outside. When the black van she calls Scooby pulled up to the back entrance (instead of the front) of Kirkwood Community College, reporters and photographers gave chase, as captured by MSNBC.

VIDEO: Reporters ran to get to close to Clinton as the Scooby Van approached her Iowa event https://t.co/7vqR31b6NN

It was comical. And embarrassing. Was that really the Iowa way?

Or was it like taking a gondola ride in the Venetian hotel in Vegas instead of Venice? To hear the people Clinton met with tell it, though, from the inside, it felt like the real deal. Yes, they were all hand-picked. But they weren't all supporters.

Before Clinton had even left the state, her campaign sent out images of front pages from all the local papers. And there she was with a cup of coffee smiling and chatting with Iowans.

The chase continues on Monday in New Hampshire. According to a campaign aide, Clinton will hold roundtable discussions and meet privately with elected officials and Democratic activists around the state. Luckily for the reporters giving chase, New Hampshire is a much smaller state.