Accessibility links
With Tears And Thanks, Attorney General Eric Holder Says Goodbye : It's All Politics In his final day on the job, Holder offered NPR some final reflections including recent criticism of weaponized drones and why he calls same-sex marriage the "civil rights struggle of our time."

With Tears And Thanks, Attorney General Eric Holder Says Goodbye

With Tears And Thanks, Attorney General Eric Holder Says Goodbye 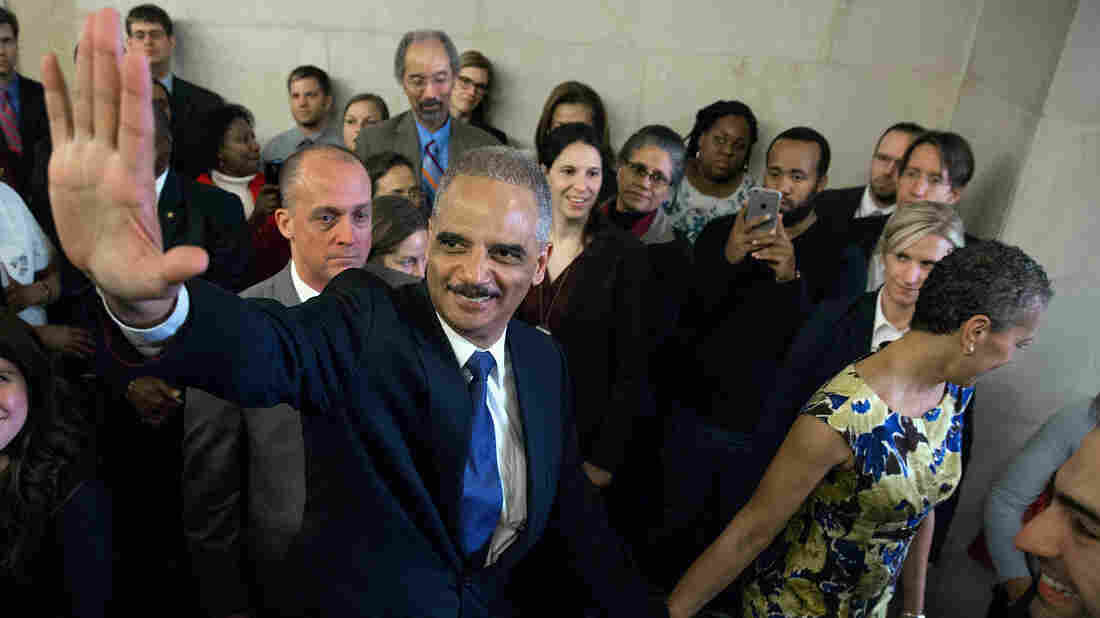 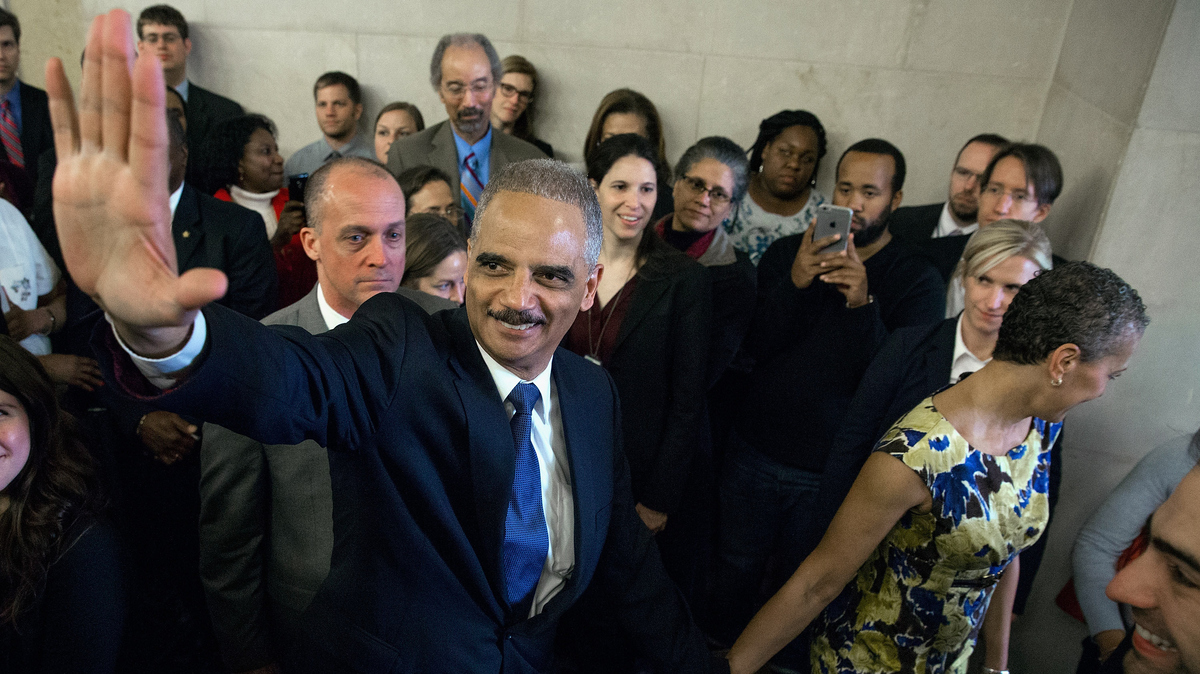 "Hey," the attorney general said as he walked into his final meeting with senior staffers Friday morning. "Let's do this one last time."

After more than six years running the Justice Department, Eric Holder took a seat at his polished wooden table and prepared to close the door on an institution where he'd spent countless hours since September 1976.

Holder, the first African-American to serve as U.S. attorney general, had a famously rocky relationship with Republicans in Congress, who held him in contempt a few years ago for refusing to turn over documents in a gun trafficking scandal along the Southwest border. But on his last day on the job, inside his ornate fifth floor conference room, even those scuffles became a source of humor.

"I will certainly miss your turning to me in the midst of hearings and giving me that look of, 'why am I here and how can you get me out of here?' " Legislative Affairs Chief Peter Kadzik said.

Next came an update about his successor, Brooklyn U.S. Attorney Loretta Lynch. Lynch endured five months of delays before she won Senate confirmation this week, by a vote of 53-46. Ultimately, 10 Republicans including Majority Leader Mitch McConnell, R-Ky., cast their votes in her favor.

"A few red state senators I think looked at the 2016 election, in addition to all the great things Loretta brings to the table, and must have thought, for my continued political survival this would be a wise thing to do," Holder interjected.

The business at Justice rolled on. The White House has launched a review of its targeted killing program for al-Qaida figures overseas after President Obama disclosed that the U.S. had accidentally struck an American and an Italian hostage this year. Advocates at the American Civil Liberties Union and elsewhere say such misfires cast fundamental doubt on the effectiveness and intelligence that guides the lethal operations. 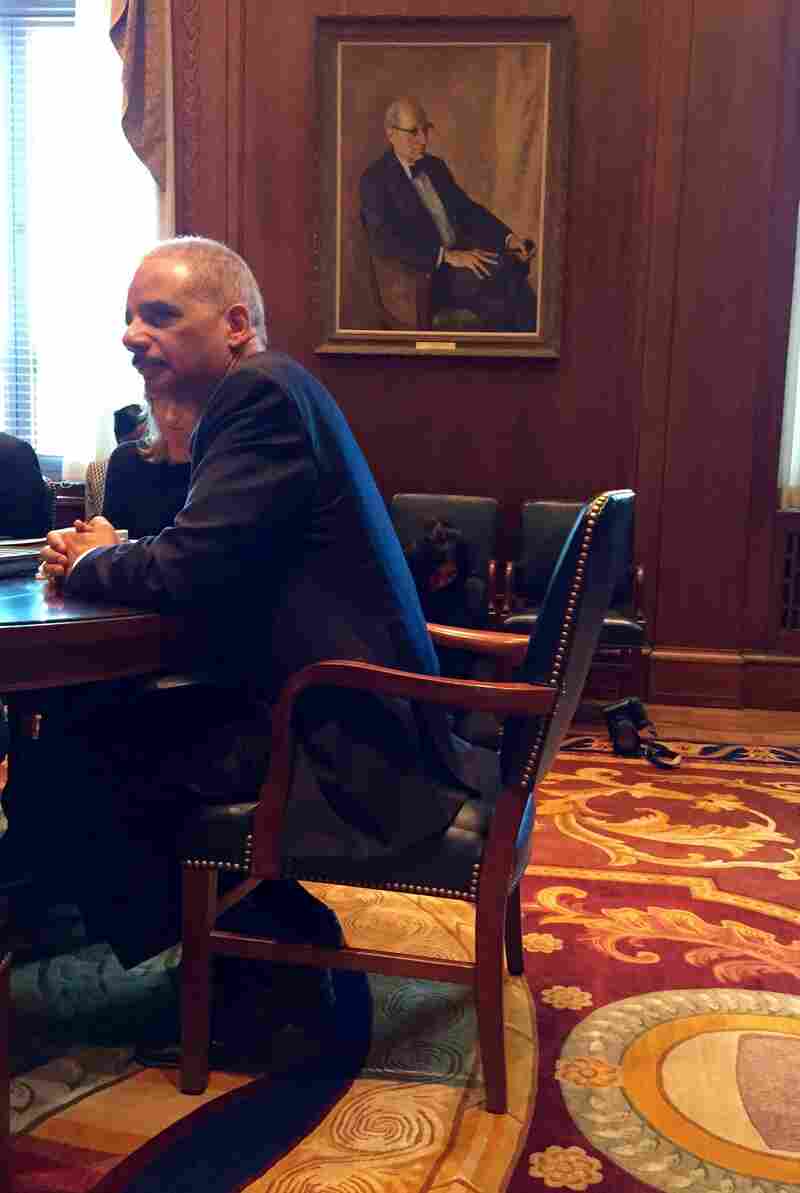 "Hey," the attorney general said as he walked into his final meeting with senior staffers Friday morning. "Let's do this one last time." Carrie Johnson/NPR hide caption

But in an interview, Holder betrayed few doubts about weaponized drones deployed on foreign soil. "You always want to ask questions about how you can do things better ... but this is something that is done with extraordinary care within the executive branch," he said. "The process we have in place is an extremely robust one."

Late Thursday, a federal judge in North Carolina sentenced former CIA Chief David Petraeus to two years of probation for leaking secrets to his biographer and mistress. Critics say the former Cabinet member got preferential treatment, because many other convicted leakers in the Obama years have been sentenced to lengthy prison terms. Holder brushed aside that idea, saying, "It's not only a question of the fact of the inappropriate disclosure, it's what's the impact of that disclosure that ultimately guides us in making prosecutive determinations."

And early Friday, Comcast announced it would abandon a merger bid with Time Warner, a move that came only after antitrust enforcers at Holder's Justice Department signaled they would sue to challenge the deal. Department lawyers are preparing next week for a momentous argument in front of the Supreme Court, which could be poised by Summer to declare a fundamental right to same-sex marriage. Eric Holder calls that the "civil rights struggle of our time."

By then, Holder will be a private citizen, and in keeping with his farewell, his staff decided to bestow some gifts. Lee Lofthus, a veteran leader of the Justice Management Division, presented the outgoing attorney general with a plaque that contained insignias and badges for the FBI, the U.S. Marshals, the Drug Enforcement Administration and the Bureau of Alcohol, Tobacco, Firearms and Explosives. Holder joked those badges could come in handy once he begins a much-anticipated, cross-country drive this year.

First, though, he's got to remember how to operate a car on his own. Since late 2008, he's been driven around by FBI agents in an armored vehicle, and barely been behind the wheel himself.

"My security detail is so concerned that they're going to take me down to the FBI academy and give me some driving lessons along with my 17-year-old son who has a learner's permit ... and I'm looking forward to that because I love to drive," he said.

Holder says he'll miss his security detail. He prods "Bart," the supervisory special FBI agent who leads his protection unit, about a trip they took to Canada. Barton Brown asked a young bystander outside the parliament building if he could recognize the tall African-American man in front of them. "Yeah, he's Will Smith," the Canadian bystander said.

"Thank you Bart for all that you've meant to me over the years," Holder added, with a grin.

There were plenty of tears at the morning meeting — from Holder, who clutched a tissue in his hands; from the second-in-command, deputy Sally Q. Yates; and from a dozen staff members who had spent years alongside the attorney general during unspecified crises of national security and civil rights.

"You put your arms around me and you got me through some of that bad stuff, so on a very personal level, I want to thank you for that," Holder said.

Later, Holder retreated to his small private office, where all the cupboards had been cleared. Friday, he said, was a day for crying and shaking hands, not moving mementos including prized photos of basketball heroes and musicians.

He ended the day by addressing employees one last time — capping his remarks by removing a black plastic wristband that said "Free Eric Holder." The wristband and its slogan represent a nod to the lengthy confirmation process for his successor, Lynch. "I think we can officially say now that Eric Holder is free, but it is not necessarily something that I want. I don't ever want to be free of this great institution," he said.