Accessibility links
Beyond Quid Pro Quo: What Counts As Political Corruption? : It's All Politics Under narrow definitions of corruption, candidates courting billionaires to fuel their White House bids doesn't qualify. But some activists, on the left and the right, argue that it should. 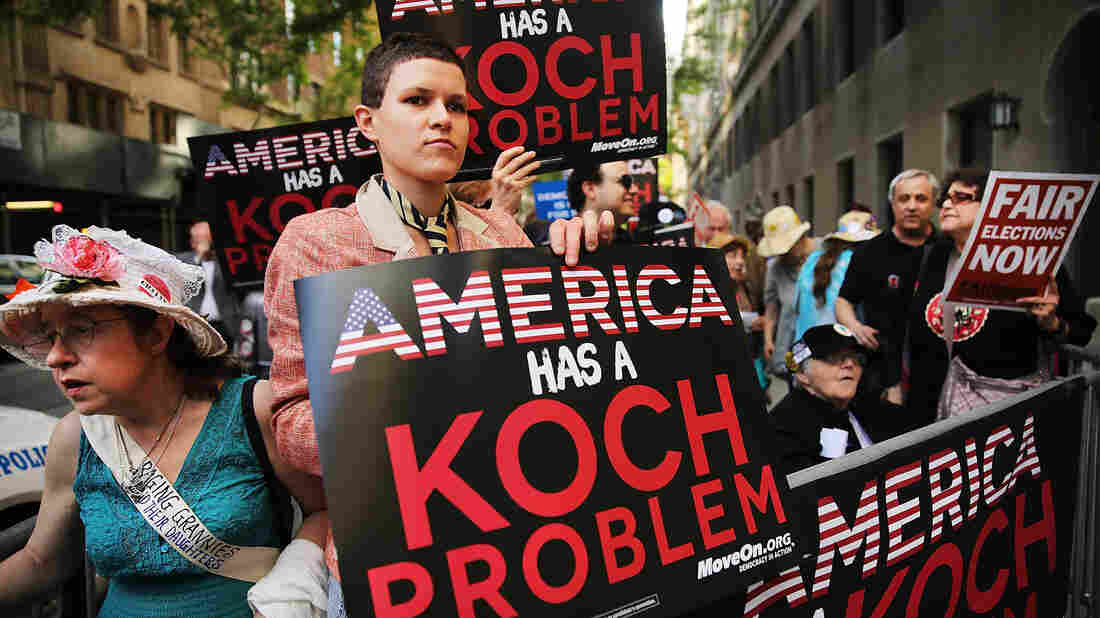 Can candidates courting billionaires count as corruption, even if there are no explicit strings attached? Some activists see the campaign contributions of the super-rich as a problem, regardless of whether "quid pro quo" deals are made. Here, activists protest the political influence of the wealthy Koch Brothers near David Koch's Manhattan apartment on June 5, 2014. Spencer Platt/Getty Images hide caption 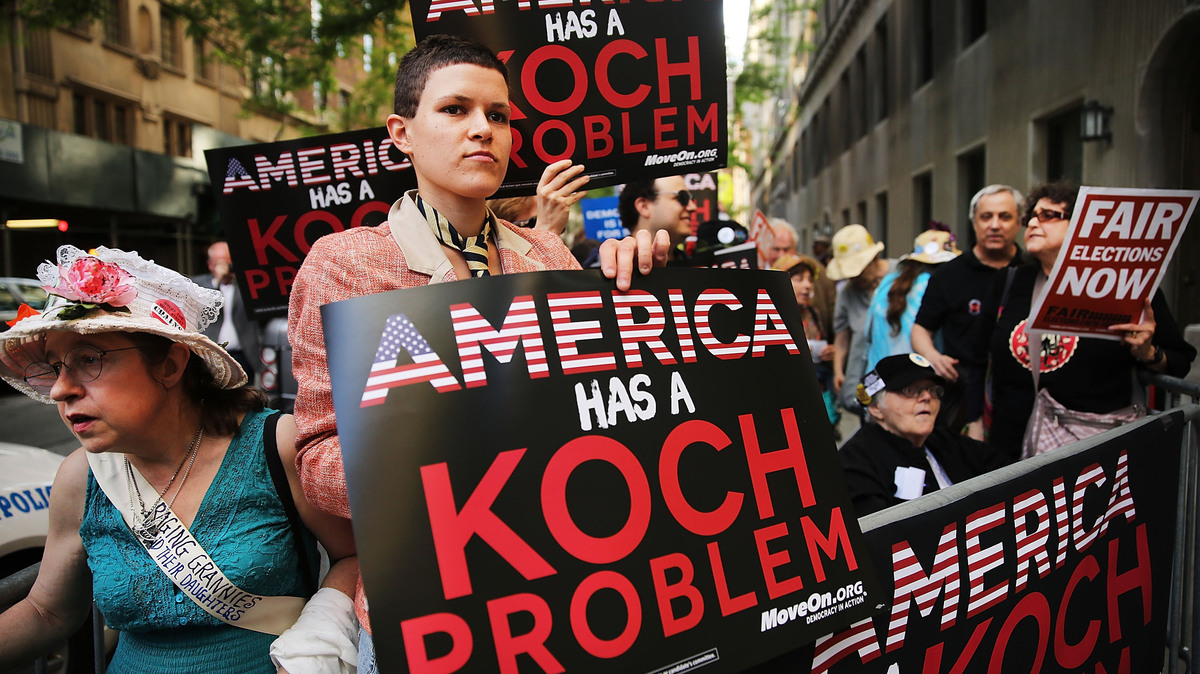 Can candidates courting billionaires count as corruption, even if there are no explicit strings attached? Some activists see the campaign contributions of the super-rich as a problem, regardless of whether "quid pro quo" deals are made. Here, activists protest the political influence of the wealthy Koch Brothers near David Koch's Manhattan apartment on June 5, 2014.

The presidential hopefuls haven't spent much time so far with voters. Instead, they've committed many days to courting the millionaires and billionaires who can fuel a White House bid. And at the same time, activists on the left and right are seeking to redefine political corruption, which they believe this is.

One prime example: The political network of brothers David and Charles Koch — with pledges of nearly $900 million — seems to bedazzle prospective Republican candidates. In a recent conference call sponsored by the Koch-backed Americans For Prosperity, presidential candidate and Florida senator Marco Rubio was asked about a possible endorsement by the brothers.

He replied, "I have tremendous admiration for what the Koch family and their networking does, espousing the issues of limited government, free enterprise, liberty and opportunity for all, so would love to earn their support, of course."

This kind of play for the blessing of billionaires used to be over the line between politics-as-usual and corruption.

The current chief justice, John Roberts, had led an effort to tighten that broad language. Roberts, delivering the McCutcheon v. FEC ruling last year, defined corruption as "a contribution to a particular candidate in exchange for his agreeing to do a particular act within his official duties."

He was describing a quid pro quo – the donor's money in explicit exchange for the politician's official favor. It's a felony.

Money Rules: Candidates Go Around The Law, As Cash Records To Be Smashed

"It's really the wrong way to look at things," says Zephyr Teachout, a law professor at Fordham School of Law.

Teachout, who ran for governor of New York in last year's Democratic primary against incumbent Andrew Cuomo, says the founding fathers didn't see corruption as a specific, indictable offense. Today, she says, Americans who aren't lawyers or politicians often see it the same way, as a corruption of the system. "Someone is corrupt when they're in public office just for their own interests," she says. "This is why you see sort of broad belief that Congress is corrupt, even though there's very little evidence of quid pro quo."

Lawrence Lessig, a professor at Harvard Law School, founded of Mayday PAC, a superPAC intended to fight unlimited money in superPACs. He and Teachout agree on the idea that corruption is a system problem. Lessig presents the issue as one not of equal political speech, but of equal rights.

"We are talking about equal rights as citizens, equal right to participate in the political process," he says. "That's precisely the equality which has been destroyed by the way we've allowed campaigns to be funded."

Lessig and Teachout are progressives. But some conservatives and libertarians have their own views of political corruption, and their own possible solutions.

You Didn't Check The 'Presidential Election Campaign' Box On Your Taxes, Did You?

He says, "The taxpayer has to have — has a right to have a meaningful voice in choosing the people who are going to spend the money."

To get that meaningful voice, Painter proposes $200 tax credits, for people to use as political contributions. Those could be worth $8 billion per election, he says, and would give voters clout long before the election.

"It doesn't work to say they get to choose on Election Day between two candidates who've been pre-selected by the big donors in the two political parties," he says.

But at the libertarian Cato Institute in Washington, D.C., research fellow Trevor Burrus is skeptical that corruption can be fixed with new campaign finance rules. They would inject more government activity into elections, he says, and "I doubt that they'll have any effect on people's perception of corruption, or actual corruption in areas like lobbying."

Corruption in lobbying, he says, arises from the mismatch on Capitol Hill: squadrons of well-paid, experienced lobbyists versus congressional offices where aides are overworked, underpaid and have to depend on those lobbyists for information about issues. Burrus wants to see congressional offices with more aides who would get better pay, to keep them on the Hill longer while they develop their own expertise. He would also close the metaphorical revolving door, through which staffers and lawmakers travel to make more money as lobbyists.

Burrus says that by breaking the close bonds between lobbyists and congressional offices, lawmakers might become less beholden to the lobbyists' employers — the corporations, unions and special interests that underwrite American politics.