Accessibility links
Clinton 'War Room' Pushback And The 'Invent Your Own' Media Campaign : It's All Politics Hillary Clinton's campaign went into overdrive Tuesday, trying to minimize damage from a new book that delves into Clinton foundation fundraising — and it's not using the typical channels to do so.

Clinton 'War Room' Pushback And The 'Invent Your Own' Media Campaign

Clinton 'War Room' Pushback And The 'Invent Your Own' Media Campaign 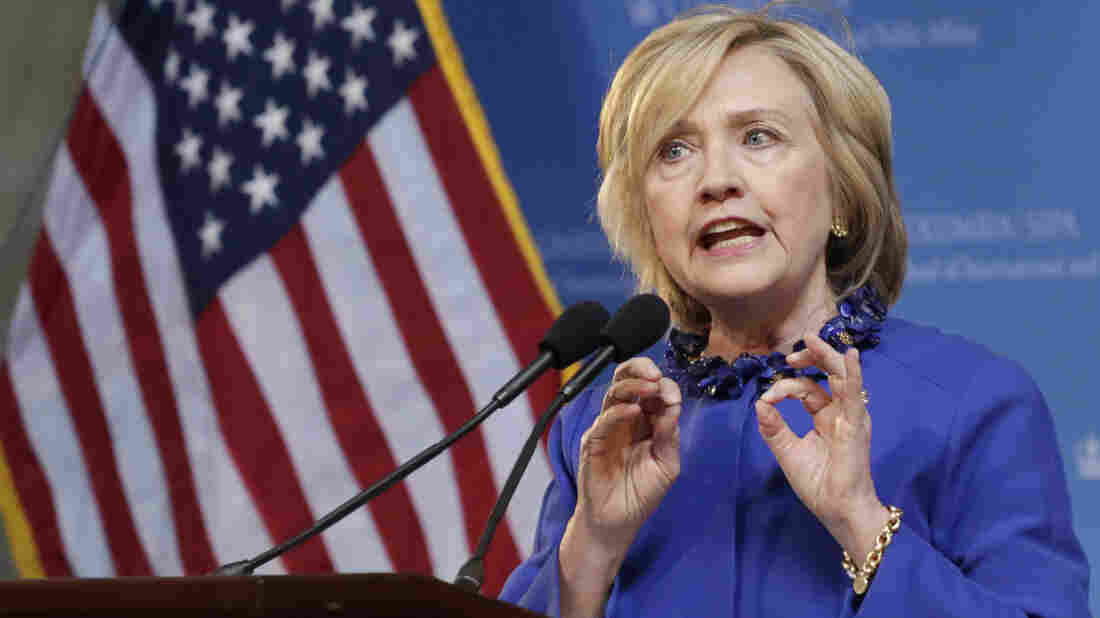 The Clinton campaign is embracing several new technologies and platforms to get its message out more directly to voters, a tactic her potential rivals are sure to employ, too. Mark Lennihan/AP hide caption 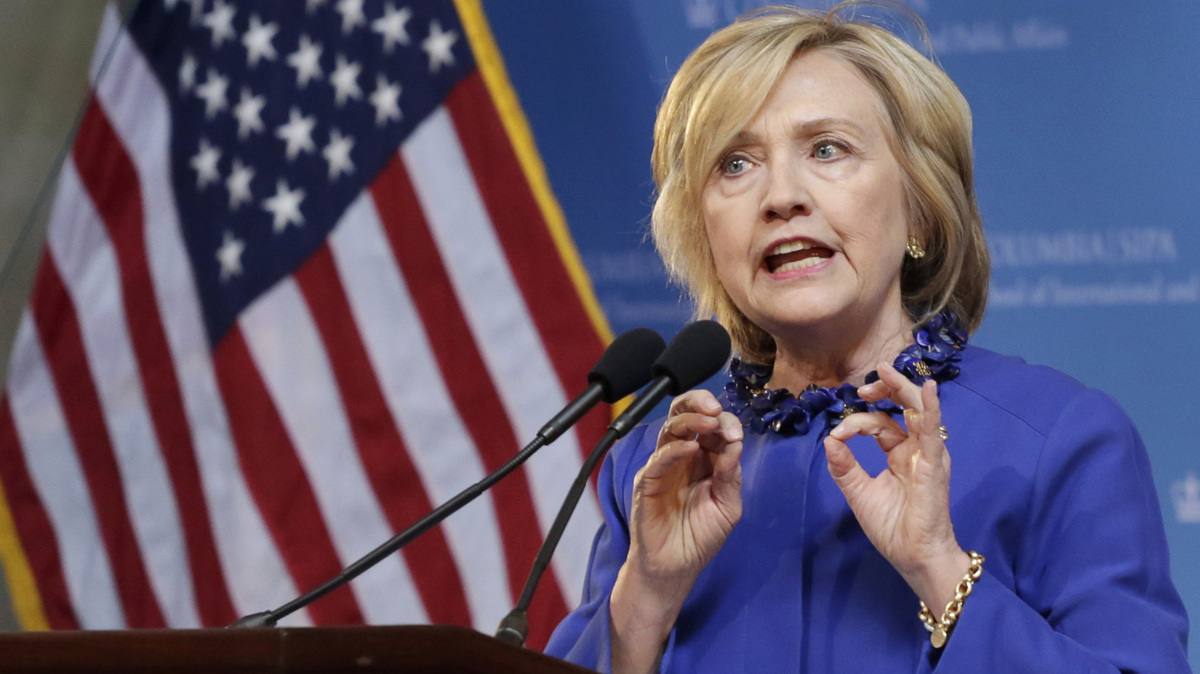 The Clinton campaign is embracing several new technologies and platforms to get its message out more directly to voters, a tactic her potential rivals are sure to employ, too.

The Hillary Clinton campaign went into overdrive Tuesday trying to minimize the damage from a new book that delves into Clinton foundation fundraising — and it's not using the typical channels to do so.

On the same day that the controversial new book, Clinton Cash by Peter Schweizer, was officially released, the Democrat's presidential campaign largely went around the traditional media in favor of new media tools.

Though campaigns have been trying to bypass the media filter for years, it's an advent of a new era in politics. The Clinton campaign is embracing several new technologies and platforms to get its message out more directly to voters, and it's a tactic her potential rivals are sure to employ, too.

"It's almost media 3.0," said Tobe Berkovitz, a professor of political communication at Boston University. "If 1.0 was dealing with the press and 2.0 was trying to circumvent the press and going to friendly sites, 3.0 is, 'Why even bother with that? Just invent your own.' "

Through a new section of its campaign website, called "The Briefing," and a post on the platform-sharing site Medium, Clinton's campaign went on offense against Schweizer and his suggestions that foreign donations to her family's foundation influenced her time at the State Department — all without the candidate addressing it head-on.

A 2 1/2-minute video posted on the new site from campaign spokesman Brian Fallon derides Schweizer as a GOP operative who was a former adviser to 2008 vice presidential nominee Sarah Palin and a close friend of the Koch brothers. He also noted that research by ABC News and even Fox News revealed there was no "smoking gun."

"The book is already being debunked far and wide," Fallon said. "It's full of sloppy research and attacks pulled out of thin air with no actual evidence. And it's missing the most important thing of all: facts."

"While we will not be consumed by these kinds of attacks, we will also not let them go unchallenged. That's why we are building a new one-stop shop to provide the facts about Hillary Clinton's positions and her record. We are calling it 'The Briefing.' You will be able to find information and it will serve as a hub that allows Hillary for America to cut through the partisan noise over the next 18 months and directly communicate with voters. This forum will provide the public with direct access to the facts on the positive policy agenda that Hillary will unveil over the course of campaign, as well as the facts needed to debunk false attacks."

This isn't the first time since she announced last month that Clinton's team has used these new platforms, especially to target Schweizer. Though his book was just released on Tuesday, details have been leaking out for weeks, and other media organizations like The New York Times have used his research to further investigate specific claims.

Team Clinton has turned to Medium before. Fallon released a statement on the site after the publication of a Times story that raised questions about the linkage between donations to the Clinton foundation and the government's approval of a Russian uranium mining company while Clinton was secretary of state:

"Without presenting any direct evidence in support of the claim, the Times story — like the book on which it is based — wrongly suggests that Hillary Clinton's State Department pushed for the sale's approval to reward donors who had a financial interest in the deal."

Last week, the Clinton campaign also released a Vine of comments Schweizer had made at a 2014 Koch brothers summit, where he told fellow conservatives "we cannot let up."

The use of new media in favor of more traditional media isn't a surprising strategy from the Clinton campaign, given Clinton's decades-long distrust of and tension with the media. It's also not a new tactic, with campaigns' rapid-response teams trying to get their message out at any cost and through any channel. And given the way more and more people, especially younger voters, consume news, it might be the most efficient as well.

The embrace of these new platforms is one that both the Democratic and Republican presidential candidates are likely to use even more this cycle.

Clinton's campaign insists it is not bypassing the media in the new approach but is instead using multiple platforms to get its message out.

"Our campaign will work with the oldest of media outlets and the newest of technologies to reach voters," Clinton spokesman Josh Schwerin told NPR in an emailed statement. "It would be a false choice to say it's one or the other. There is so much misinformation flying around that, whether it's through the press or on social media, it's important for voters to be able to access the facts directly, so they can assess for themselves and help beat back the partisan attacks."

It's also a way for the campaign to release a controlled, scripted narrative instead of having Clinton herself answer questions about the issue. National Journal noted last week she has only answered a total of seven media questions since she became an official candidate. She twice dismissed allegations in Schweizer's book as "distractions," but she did not answer the charges directly.

The one unscripted response came from former President Bill Clinton in an interview with NBC News Monday that the family foundation had "never done anything knowingly inappropriate" in accepting money from foreign governments.

The foundation has reinstated a ban on donations from all but six foreign countries now, but the former president said that move was "absolutely not" an acknowledgement that accepting previous donations was a mistake.

For the Clinton campaign, this approach is "much better than actually trotting Hillary out somewhere and have her answer what might be tough or aggressive questions," Berkowitz said. "Release the video, and then you release the hounds."

"What I see happening is a classic Clinton-style war-room operation utilizing all the new media that are out there," Manley said. "I think they deserve a lot of credit for utilizing new things like Medium, but I also respect that they're not going to leave any charge unanswered."

Clinton is far and away the Democratic front-runner for president, and she still beats most of her possible GOP rivals in hypothetical head-to-heads too. But amid questions about the Clinton foundation and an earlier controversy about her use of a private email server instead of a government account while she was at the State Department, her polling numbers have suffered.

Since March, Clinton's unfavorable rating has risen 6 percentage points while those who said she was honest and straightforward have dropped 13 points in a year, according to an NBC/Wall Street Journal poll released this week.

Clinton has been under sustained assault from Republicans on the campaign trail and Capitol Hill. And she will continue to be, with hearings and testimony coming about the terrorist attack on the U.S. outpost in Benghazi, Libya.

"I think every bit is going to help, but the Republicans have an amazing ability to drudge up all sorts of crazy conspiracies about the Clintons," Manley said. "These kind of tools can only take you so far, but at some point she's going to have to start addressing some of these things herself."