Accessibility links
Jeb Bush Would Have Authorized Iraq War — Even Knowing What We Know Now : It's All Politics The Bush last name is one of the biggest stumbling blocks to Jeb Bush's becoming president. He says he is his own man, but over the weekend he said he would also have authorized the Iraq War. 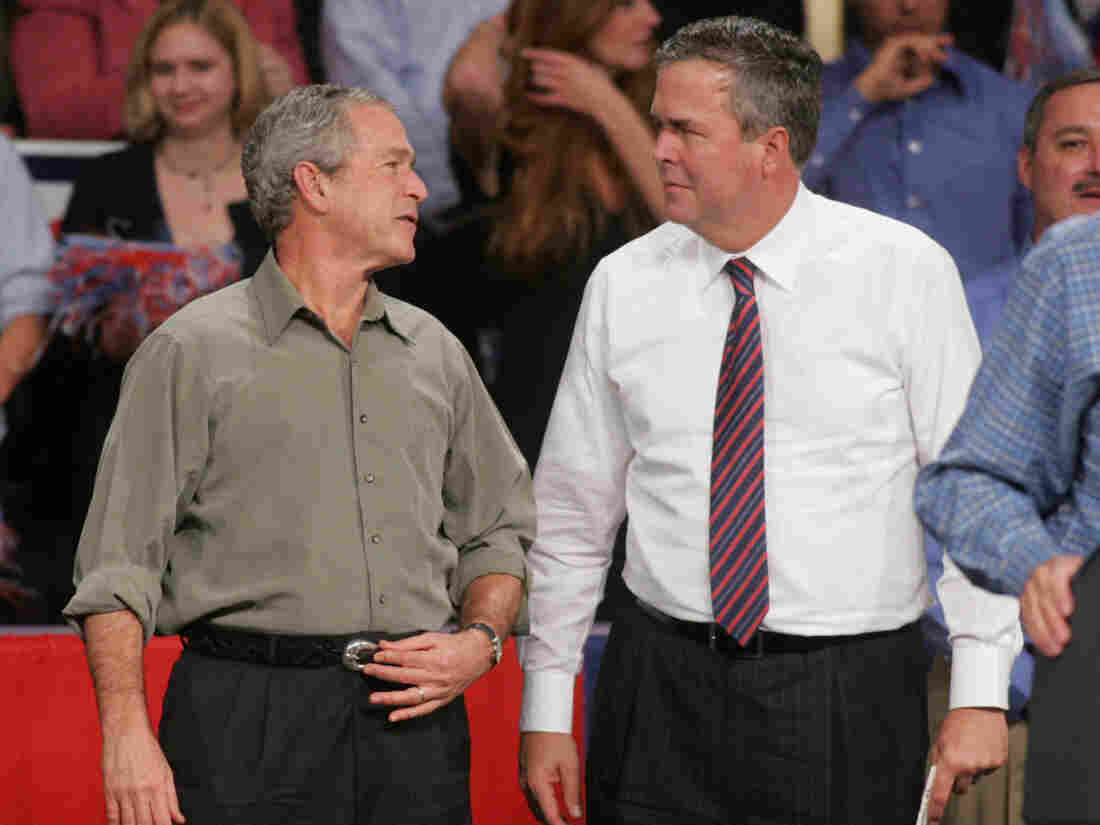 Then-President George W. Bush jokes with his brother Jeb, the then-Florida governor, in 2006. Jeb Bush has been asked before, and is sure to be again, how he would distinguish himself from his brother. Mari Darr~Welch/AP hide caption 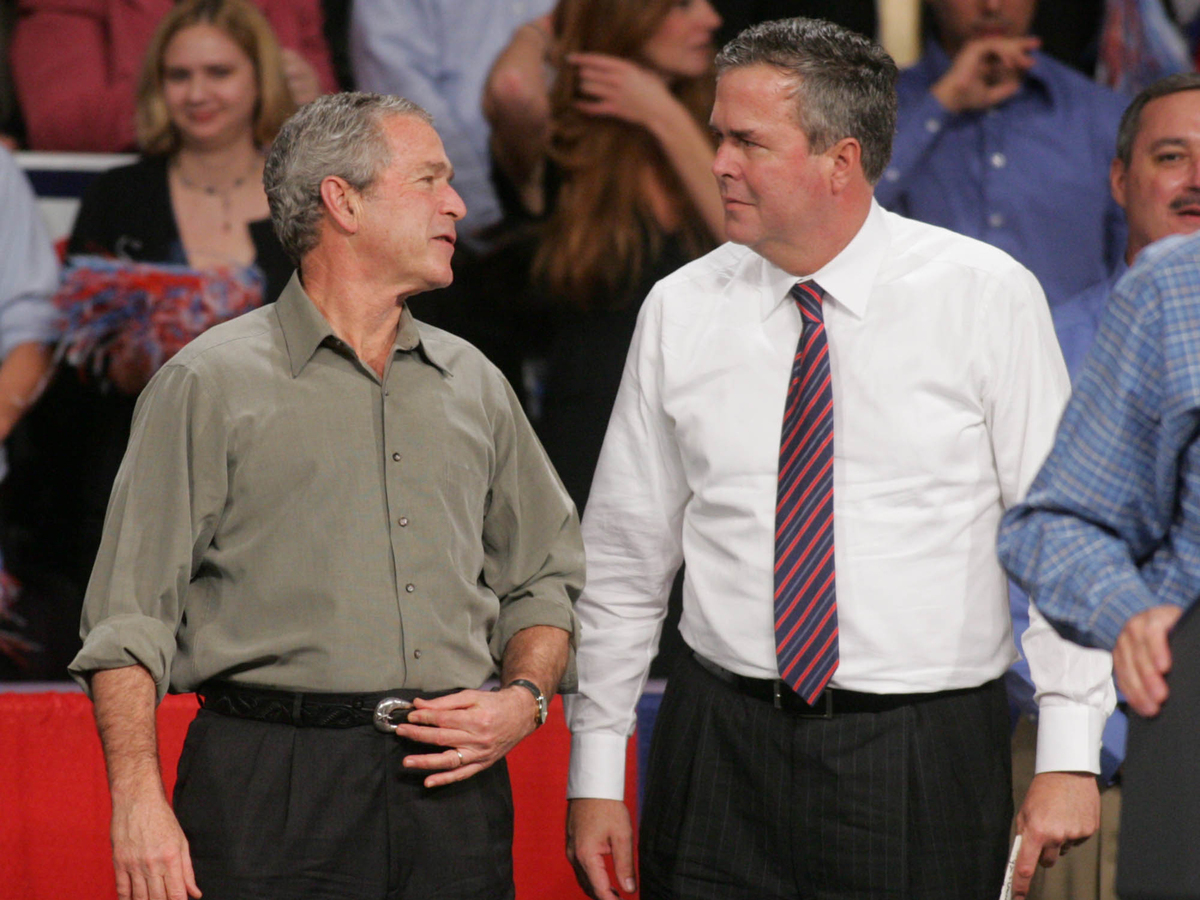 Then-President George W. Bush jokes with his brother Jeb, the then-Florida governor, in 2006. Jeb Bush has been asked before, and is sure to be again, how he would distinguish himself from his brother.

If one of Jeb Bush's biggest stumbling blocks to the presidency is his brother's tumultuous tenure in the White House, this past week hasn't been a good one for the former Florida governor.

After telling a group of fundraisers behind closed doors that former President George W. Bush was one of his advisers on the Middle East, the likely 2016 GOP hopeful followed that up telling Fox News' Megyn Kelly that he would have authorized the Iraq War — even knowing what we know now.

"I would have, and so would have Hillary Clinton, just to remind everybody," Bush told Kelly in an interview to air Monday night. "And so would almost everybody that was confronted with the intelligence they got."

He added, "News flash to the world, if they're trying to find places where there's big space between me and my brother, this might not be one of those." (In the clip posted by Fox, the audio drops out after that, so it's unclear what he goes on to say right afterward.)

The former governor's point that Clinton, now the front-runner for the Democratic nomination, voted for the 2003 Iraq War resolution very likely won't mute the issue for him, though.

While Clinton, then a New York senator, took heat for her vote in the 2008 campaign — and that was a big reason she lost the Democratic nomination — she has since called the vote "wrong."

In her 2014 memoir, Hard Choices, she said she "wasn't alone in getting it wrong. But I still got it wrong. Plain and simple."

In other words, knowing what we know now, Clinton says she would not have authorized the invasion.

Bush tried to qualify his reasoning by pointing to the faulty intelligence that led to the war. But anything that reminds voters of his ties not just to his brother but to his brother's policies is a huge negative.

"I love my father and my brother," Bush said in February during a speech in Chicago. "I admire their service to the nation and the difficult decisions they had to make. But I am my own man —and my views are shaped by my own thinking and own experiences."

But as the months tick by, Jeb Bush has not shown how, exactly, substantively, he would be different from his brother George W., particularly with regard to one of those "difficult decisions" — deciding to go into Iraq.

Despite finding no "weapons of mass destruction," Bush argued in a 2010 interview with CBS News' Jim Axelrod that removing Saddam Hussein from power made "America more secure."

"In my view, what justifies everything is the removal of a threat," Bush said in the interview.

But once it was found that no WMD was discovered, the decision became very unpopular and was a big reason for Bush's and the GOP's decline in popularity. The national Republican Party is still trying to emerge from the shadow of the Bush presidency as it tries to win back the White House for the first time in more than a decade.

Just before Bush left the White House in December 2008, his job approval rating was a meager 29 percent, according to Gallup, with a staggering 67 percent disapproving.

A March NBC/Wall Street Journal survey showed just how much the younger Bush has to do to step out of his brother's shadow. Sixty percent of voters — and 42 percent of Republicans — said the former Florida governor represents a return to the policies of the past, higher than the 51 percent who thought the same thing about Clinton.

Just 27 percent of registered voters said Bush would provide new ideas and vision for the country, while 49 percent of GOP voters said the same thing.

Bush has seen his standing both in early state and in national polls decline recently, as other candidates have gotten in the race and he remains officially on the sidelines.

A previous version of this post incorrectly said that the share of voters who think Hillary Clinton represents a return to past policies is 60 percent. The correct figure is 51 percent.