Accessibility links
Politics Rewind: Between Iraq And A Hard Place : It's All Politics Jeb Bush's shifting positions on the Iraq War gave an opening to Republican rivals for the presidential nomination. And will Hillary Clinton answer questions directly on her trip to Iowa next week?

Politics Rewind: Between Iraq And A Hard Place

Politics Rewind: Between Iraq And A Hard Place 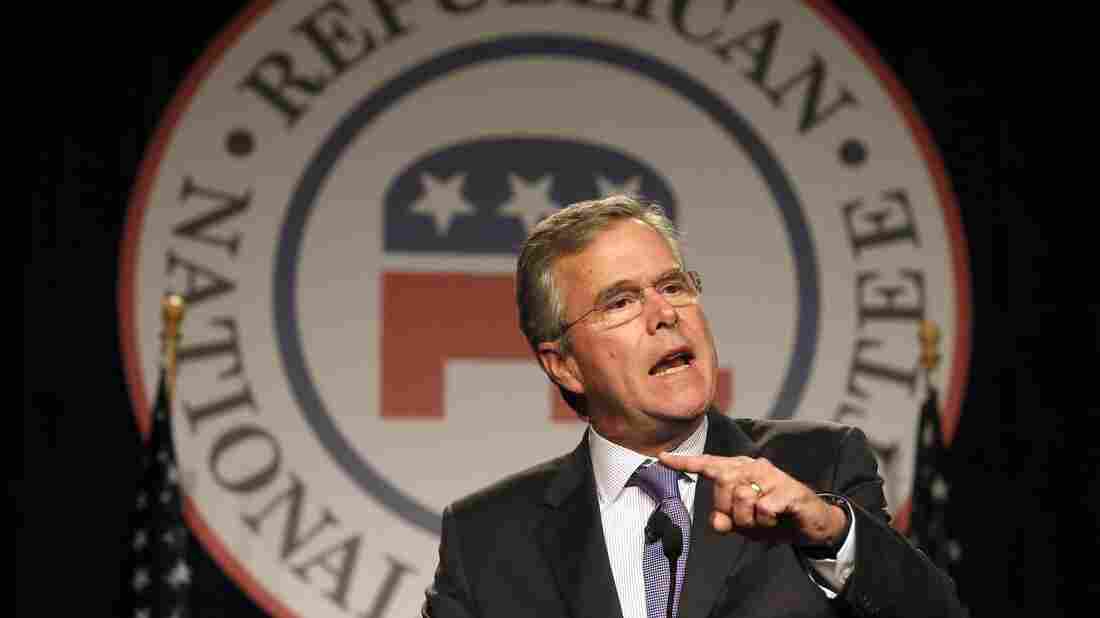 Former Florida Gov. Jeb Bush had a tough week with his changing positions on the Iraq War and trying to explain whether he would have authorized it, knowing what we know now. Ross D. Franklin/AP hide caption 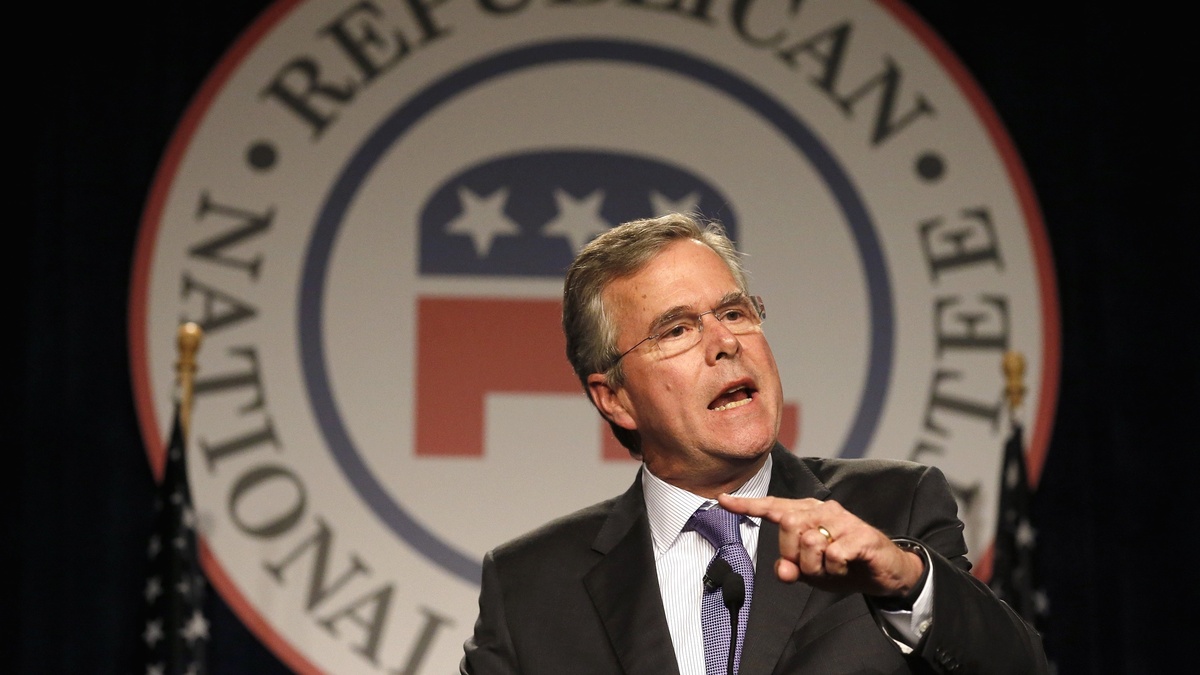 Former Florida Gov. Jeb Bush had a tough week with his changing positions on the Iraq War and trying to explain whether he would have authorized it, knowing what we know now.

He is one of the top (potential) candidates on the GOP side for president, but he got tripped up this week when talking about his position on Iraq, the unpopular war his brother, former President George W. Bush, authorized.

He went from, on Monday, saying he "would have" authorized the war — even knowing what we know now, to, on Tuesday, saying he had misinterpreted the question, but that he didn't know what he would have done actually, to, finally on Thursday, reversing position and saying he would not have gone in.

Jeb Bush Backtracks On Iraq, Says He 'Interpreted The Question Wrong, I Guess'

We hope you had your neck brace on.

Jeb Bush Fully Walks Back: 'I Would Not Have Gone Into Iraq'

Why all the excruciating vacillation? First, Bush's position was untenable. Two-thirds of Americans say the war wasn't worth fighting in the first place. Second, after a day of silence, Bush's Republican rivals pounced. So what did we learn? Despite his money and natural advantages, Bush is not invincible in the GOP primary. And don't expect the other Republicans to be so slow to go after him next time.

The question is who will emerge as Bush's principal rival. It looked like Scott Walker initially, but he's gone quiet. He was in Israel, where he took no questions. And on this controversy, all he did was issue a paper statement to a conservative reporter that he wouldn't have gone into Iraq, knowing what we know now — a day later than the rest of the field.

Can Carson-mentum last? Speaking of the potential Anti-Jeb Bush, retired neurosurgeon Ben Carson is getting a moment in the sun, parlaying his presidential announcement last week into the top spot in the latest Fox News national poll (tied with Bush). But can it last? Of the trio of White House hopefuls who announced last week (Mike Huckabee and Carly Fiorina being the other two), Carson was the only one to see such a dramatic bump. But he also now might have the most to lose. All eyes will be on him this weekend at the Iowa Lincoln Day Dinner to see what kind of a reception he gets from the party faithful beyond just the grassroots.

He's a major competitor for the crucial Iowa evangelical vote, but he will be fighting for the same crowded space with Texas Sen. Ted Cruz, Huckabee (the 2008 Iowa winner), former Texas Gov. Rick Perry, Walker and former Pennsylvania Gov. Rick Santorum (the 2012 Iowa winner). Carson doesn't have the money and organization the others have, and, so far, he hasn't been able to pack the same punch he delivered at the National Prayer Breakfast three years ago that launched him onto the political scene and made him a Tea Party darling. That's when he told lambasted President Obama's health care law with the president sitting two seats from him. That's something he'll still have to prove if he wants to keep his boom going and not turn into a bust.

Clinton's Questions. As our colleague Tamara Keith reported this week, since announcing last month, Democratic front runner has taken only 13 questions from the press — and some of her responses could hardly be considered answers. Even amid questions about donations to her family's Clinton Foundation, the candidate herself hasn't responded directly to allegations. Instead, her campaign has taken a "create your own media" strategy to manage push back and control the narrative.

But Clinton's reluctance and controlled environments can't last forever. She'll head back to Iowa next week, mainly for fundraisers and more small events – something her team has underscored is what they had planned all along until a larger launch (that was supposed to take place in mid-May. Last we checked, it's mid-May.) The following week, Clinton will make her first trip to South Carolina. She's never going to be as comfortable with the press as her husband, but it's not good for her that in the month since she got in the race, Bill Clinton has taken more questions than her.

Senate Democrats on deck. While White House hopefuls took a hiatus this week from kickoffs, it's been a busy week for Senate announcements. Democrats are on offense this cycle, trying to win back the five seats they need to flip Senate control. And their biggest boon yet came this week when former Sen. Russ Feingold, R-Wis., announced he's officially in for a rematch with Sen. Ron Johnson, R-Wis., who is one of this cycle's most endangered incumbents. Early polls have had Feingold up as much as double digits — never where an incumbent wants to start, especially in a presidential year in a blue-leaning state. Bottom line: if Democrats have any hope at winning back the Senate, Wisconsin has to be first on their list.

In other critical races, firebrand Rep. Alan Grayson, D-Fla., the main likely challenger to Democrats' preferred nominee, Rep. Patrick Murphy, D-Fla., continues to self-implode, while the GOP field looks like it's getting more crowded. That's all good news for Democrats. And while Indiana still remains a long shot, and national Democrats would still rather have cash-flush former Sen. Evan Bayh, D-Ind., run, they've at least got a credible candidate in former Rep. Baron Hill, D-Ind., now in the race. California, meanwhile, got more crowded with Rep. Loretta Sanchez, D-Calif., jumping in as the main challenger to Attorney General Kamala Harris, who already has the backing of EMILY's List and Sen. Elizabeth Warren, D-Mass. It could shape up to be a bitter race along racial lines, but is still unlikely to impact Democrats' grip on the open seat, especially since Republicans still don't have a top challenger.