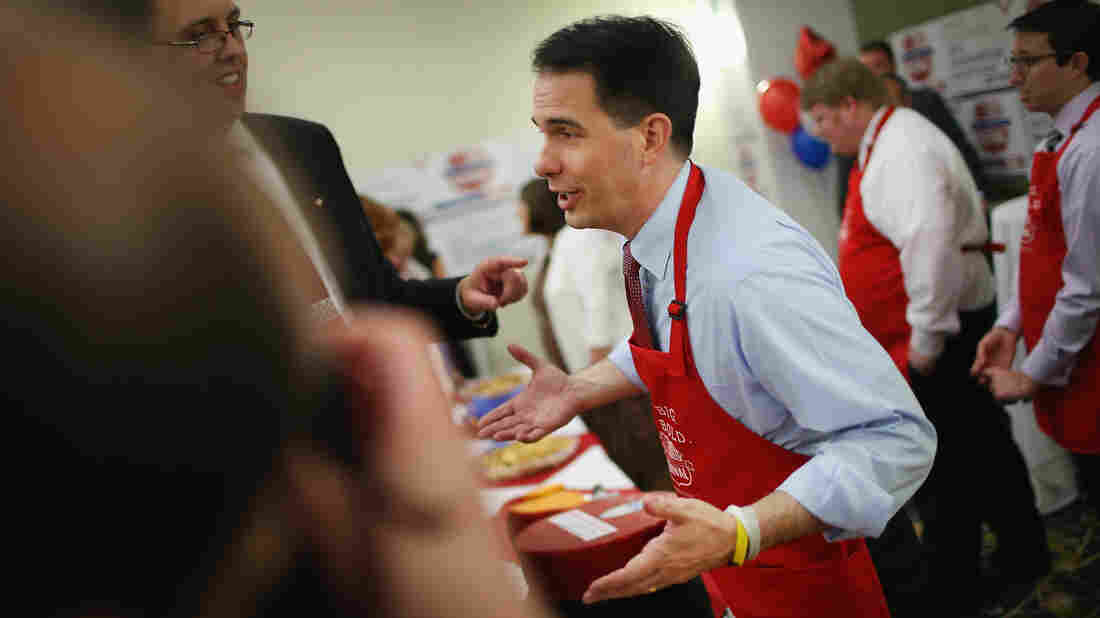 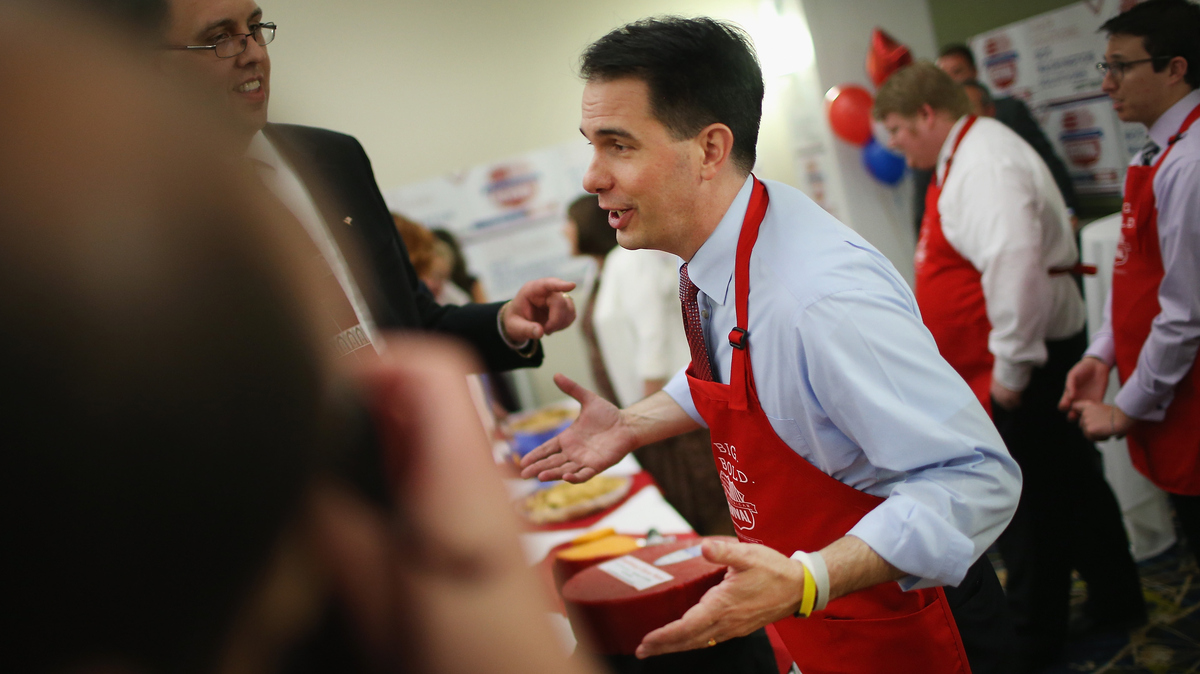 Wisconsin Gov. Scott Walker offers cheese and ice cream to guests in his hospitality room at the Iowa Lincoln Day Dinner in Des Moines on Saturday.

At the Iowa Republican Party's annual Lincoln Day Dinner fundraiser, the first part of the evening was rigid. Each of the 11 possible candidates present was given a strictly enforced 10 minutes to make their pitch before later wooing voters at their hospitality suites downstairs with home-state fare in a more relaxed environment.

Some candidates served up surprises to the crowd, too, which could make a critical lasting impression for underdog candidates.

Sen. Lindsey Graham, R-S.C., got the most laughs of the evening, declaring he was the "halftime" entertainment as he took the stage

"The more you drink, the better I sound, so keep drinking," he joked. "If you need to go to the bathroom, go ahead. Won't bother me a bit."

He jabbed at Iowa Sen. Chuck Grassley's famously frugal ways: "The one thing I learned about this dinner is it was free for Chuck or he wouldn't have been here!"

He also ribbed freshman Sen. Joni Ernst's memorable 2014 "hog castration" ad: "When I saw that ad with the pigs, I made sure I'd never offend Joni."

But the hawkish senator quickly turned serious, taking a jab at his frequent foe, Rand Paul, the libertarian-leaning Kentucky senator. Paul, who has already officially announced his candidacy, had used his own time to reiterate his opposition to the NSA's controversial wiretaps, telling voters, "I want to catch terrorists, but I also want to protect the Constitution."

Graham, who could announce his 2016 plans June 1, promised that if someone under his watch as president was thinking of joining ISIS or planning a terrorist attack, "I'm not calling a judge" to get a warrant, as Paul called for, "I'm calling a drone and we're going to kill you."

Graham also gave cover to another potential 2016 rival — former Florida Gov. Jeb Bush, who fumbled questions this week on whether he would invaded Iraq.

The former U.S. Air Force JAG Corps lawyer blamed the deterioration in the Middle East on Obama's withdrawal of troops in the region, not on former President George W. Bush.

"If you fought in Iraq," Graham said, "it's not your fault it's going to hell. It's Obama's fault."

Paul said the same question should be asked of Hillary Clinton. "If she ever takes any questions," he quipped. He then pivoted to an indictment of Clinton's reaction to the 2012 consulate attacks in Benghazi, Libya, which he said should "disqualify" her as president.

When Bush took the stage, he began by acknowledging his family in a nod to the controversy of this week.

"You all know me as George and Barbara's boy, for which I'm proud," he said. "Some of you all may know that Dubya is my brother. I'm proud of that, too."

Earlier on Saturday, Bush defended his answers this week when he was asked by Fox News' Megyn Kelly, "Knowing what we know now, would you have authorized the invasion" in Iraq? After saying he would, Bush tried to clarify the next day, saying he "interpreted the question wrong" before finally fully walking back the answer Thursday, saying he would not have gone into Iraq.

"I misstepped, for sure. I answered a question that wasn't asked," he told voters at a town hall at Loras College in Dubuque on Saturday morning.

Later that afternoon, when taking questions from reporters in Iowa City, he said all candidates were going to make mistakes.

"If you're looking for a perfect candidate," he said, "he probably existed 2,000 years ago."

"Name a country where the relationship is better than the day that Barack Obama came into office?" he asked. "Iran. Cuba. I rest my case."

Foreign policy hits against both Obama and Clinton were familiar refrains from other speakers, too.

Ben Carson, who has never held political office, but is a Tea Party favorite, saw his first lead in a poll of Republican primary voters. "While our enemies are magnifying and metastasizing, we're shrinking back," said Carson, a retired pediatric neurosurgeon.

Former Texas Gov. Rick Perry tried to offer a hopeful historical reminder: "We made it through Jimmy Carter. We'll make it through Barack Obama." 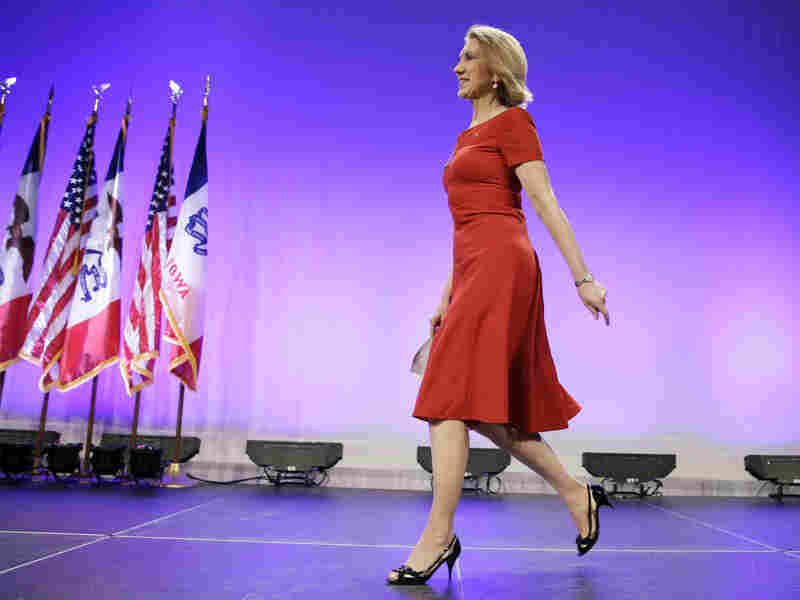 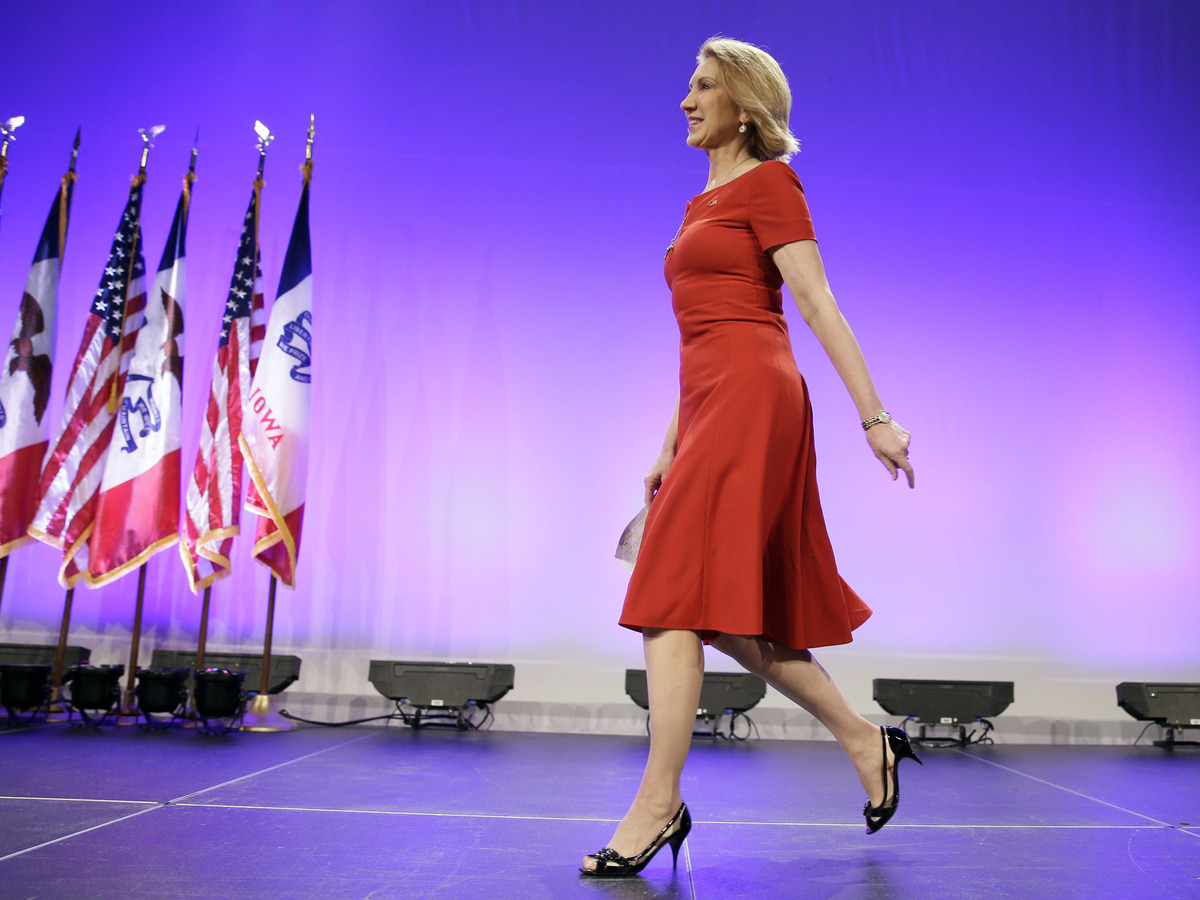 His speech ran long, and like a scene out of an Academy Awards ceremony, music began to play.

Another candidate, who got the proverbial hook, was Carly Fiorina, the former Hewlett-Packard CEO. Her microphone was cut off to the verbal frustration of the crowd. She briefly continued to speak while the audience could not hear her.

Her speech, though, was well received, including getting the loudest applause of the night with this jab, recalling how she was asked when she announced her official campaign last week if a woman's hormones would affect her ability to do the job as president.

"Can anyone think of a single instance where a man's judgment was clouded by his hormones? And in the Oval Office," she said, a not-so-subtle shot at former President Bill Clinton.

Fiorina also got applause as she contrasted her own previous meetings with foreign leaders to Clinton. Fiorina boasted how she would stand up to Russian and Iranian leaders. As she's done in previous cattle calls, Fiorina drew notice as the only woman in the field and positioned herself as a natural foil to Clinton, the likely Democratic nominee.

When the formal speeches concluded, GOP faithful mingled downstairs, meandering from room to room that candidates had set up. Some of the longest lines to meet candidates were in the suites of Graham and Fiorina, who attracted renewed interest after strong performances. The lines for Bush, Carson and Walker were winding, too. 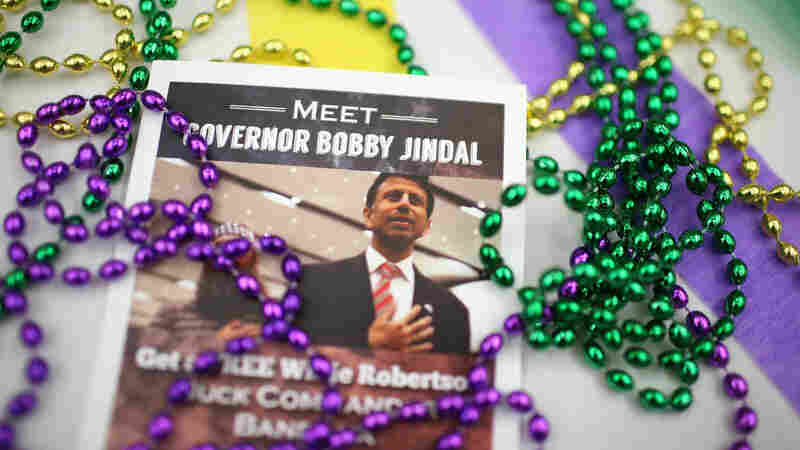 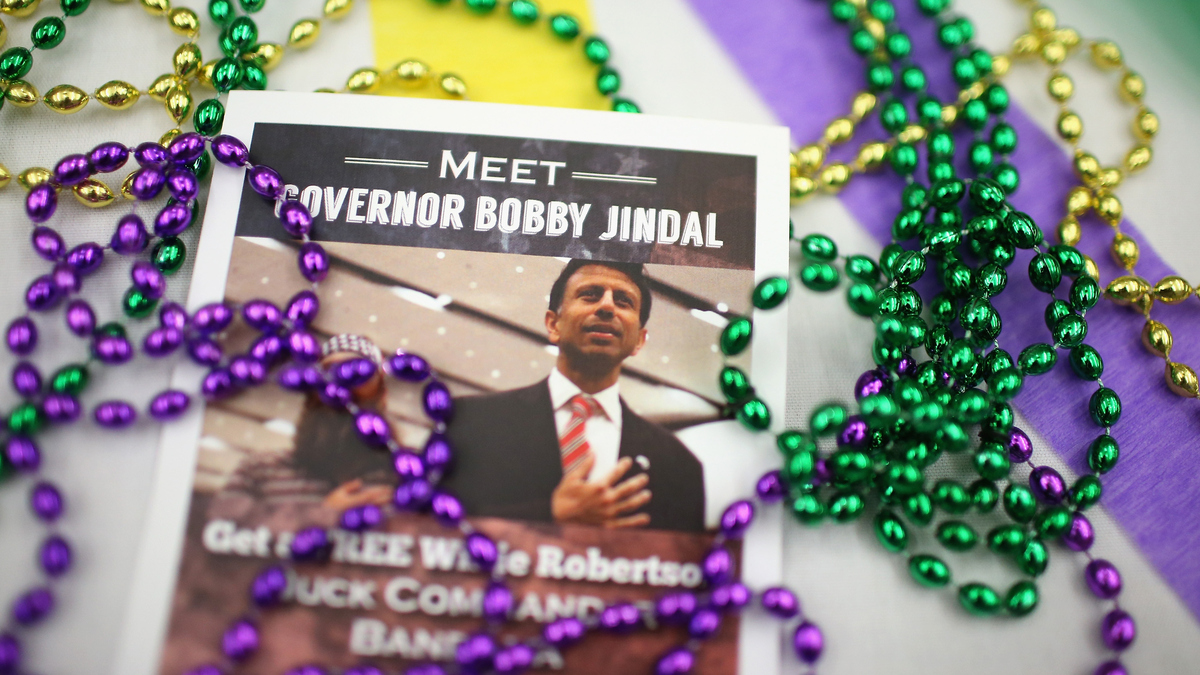 Campaign material for Louisiana Gov. Bobby Jindal sits on a table at the Republican Party of Iowa's Lincoln Dinner.

Clad in a red apron, Walker stood behind a table scooping ice cream and serving up Wisconsin cheese. A Harley-Davidson motorcycle was on display next to him — a nod to Ernst's inaugural "Roast and Ride" in a few weeks — while autographed "cheesehead" hats were on his book table in the crowded room.

Perry also served ice cream, a nod to the favorite dessert he says he usually grabs at the end of a day spent campaigning. And as Iowa Republican Party Chairman Jeff Kaufmann noted, the event and likely caucus lineup offered something for everyone of all palates in the GOP.

"It's like going into Baskin-Robbins and not knowing which flavor to take," he said at the end of the dinner. "I want a taste of every single one."