Accessibility links
How The Minimum-Wage Debate Moved From Capitol Hill To City Halls : It's All Politics Once upon a time, city councils and mayors rarely tackled the topic of minimum wages. That has changed dramatically in the past few years, as political will to raise the wages has grown. 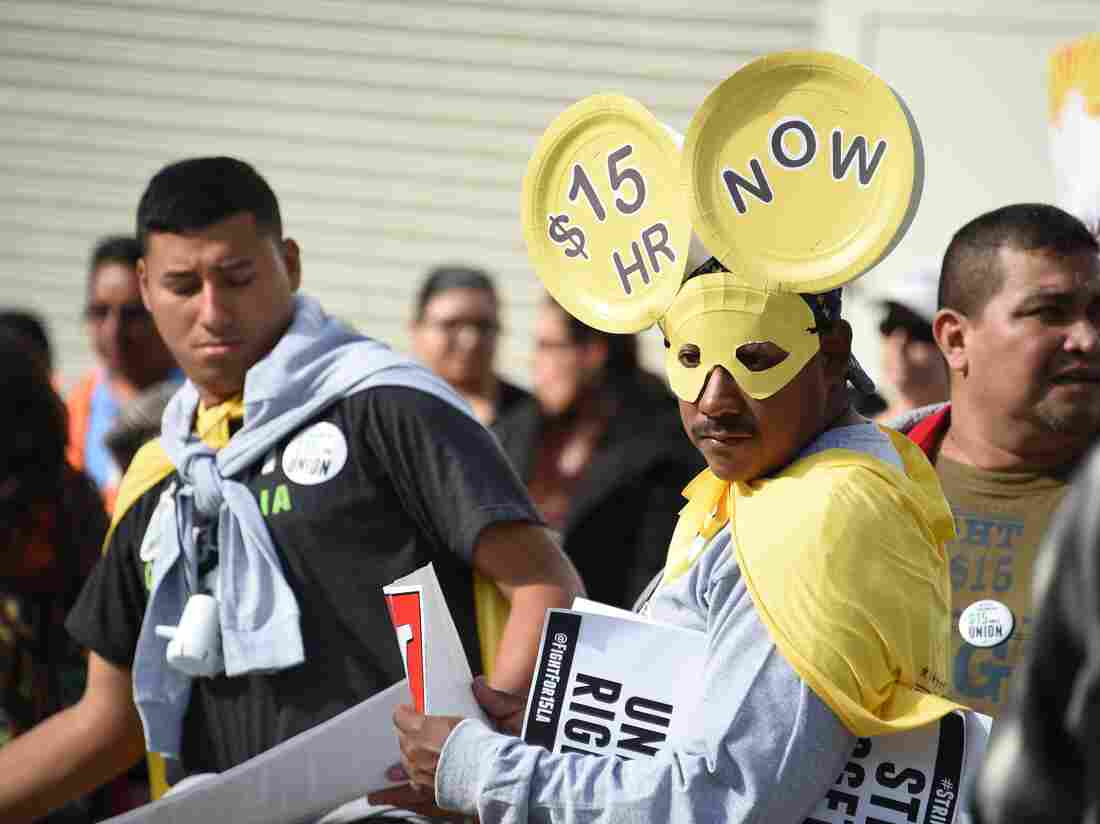 Fast-food workers, health care workers and their supporters shout slogans at a Dec. 4, 2014, rally and march to demand a minimum-wage increase to $15 per hour in Los Angeles. Robyn Beck/AFP/Getty Images hide caption 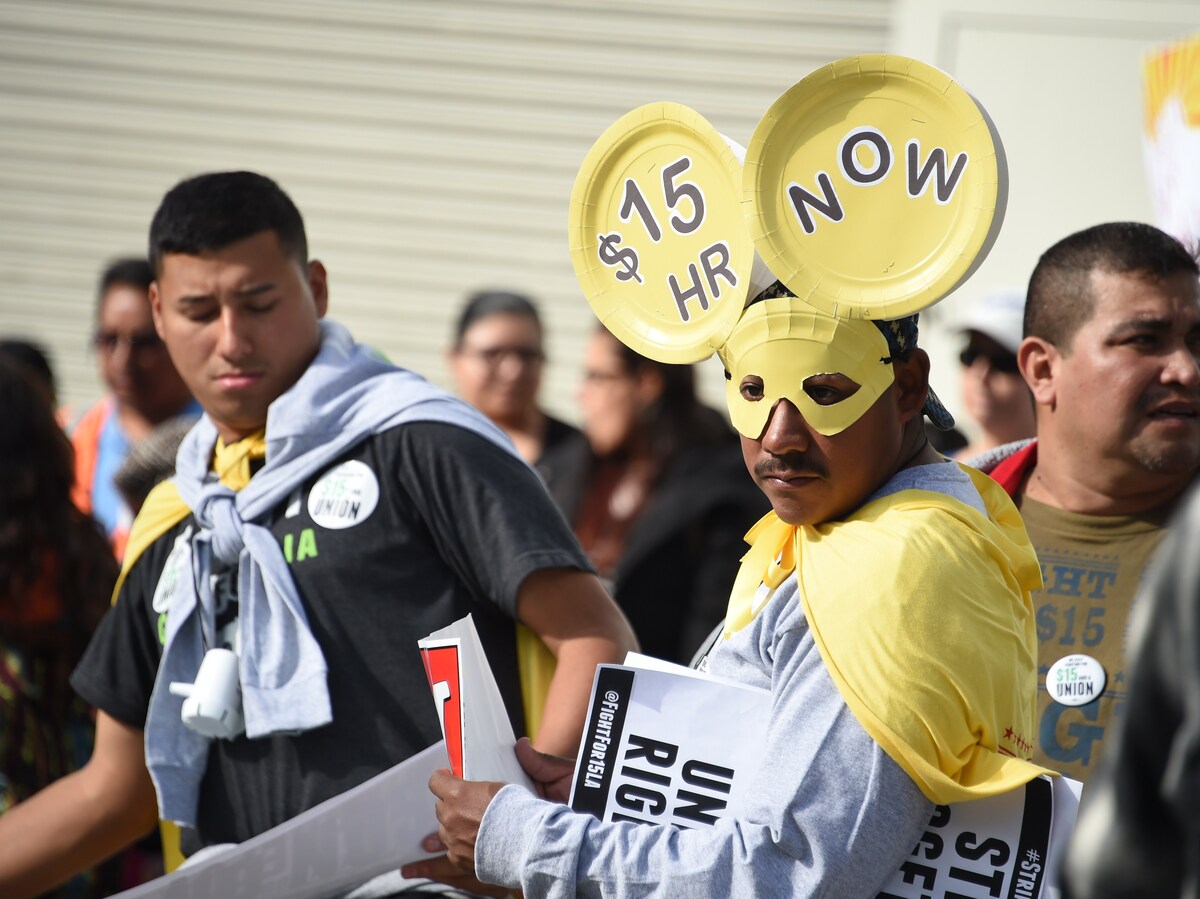 Fast-food workers, health care workers and their supporters shout slogans at a Dec. 4, 2014, rally and march to demand a minimum-wage increase to $15 per hour in Los Angeles.

Once upon a time, minimum-wage debates were mostly the province of Congress and statehouses. These days, you're more likely than ever to hear these debates in your city hall. The trend continued this week, when the Los Angeles City Council voted to raise the city's minimum wage to $15 per hour.

The second-largest city in America could soon join Seattle and San Francisco in the club of cities that have agreed to gradually raise their wages above $15 per hour. And these cities are part of a larger, recent wave of cities and counties setting their own minimum wages.

In the past few years, nearly two dozen local jurisdictions have decided to increase their minimum wages, according to data from the National Employment Law Project, a nonprofit organization that among other things advocates for higher minimum wages.

It's not that city minimum wages are altogether new — in the 1990s, Washington, D.C., set its own, and a few cities did so in the early- to mid-2000s. But since the recession, the trend has quickly picked up. In 2012, Albuquerque, N.M., and San Jose, Calif., advanced their own minimum wages. Then in 2013, five cities and counties voted to boost their wages. In 2014, 12 cities and counties did. And this year, two cities have considered, and a handful of others are considering, higher local wages — Portland, Maine, has a proposal for a higher wage, and Washington, D.C., is mulling over a still higher wage as well. (Scroll to the bottom of this post for a full list of cities that have recently passed or are considering new minimum-wage laws.)

So what's behind the trend? One is that political will to raise minimum wages has grown considerably in the past few years. It's not just cities that have bumped up their wages. This year, for the first time ever, the majority of states have minimum wages above the federal level.

A slow-moving Congress is, in part, behind that, said Yannet Lathrop, research and policy analyst at the National Employment Law Project, which advocates for higher wages.

"Congress hasn't raised the minimum wage since several years ago, so right now states are doing what they can to boost wages for their residents, and the same thing with cities," Lathrop said.

The federal minimum wage is currently $7.25 per hour for most workers and has not been raised since 2009. When you adjust for inflation, that wage is well below the $1.60 hourly minimum in 1968 (adjusted for inflation, that's nearly $11 today).

"We're leading the country; we're not going to wait for Washington to lift Americans out of poverty," Garcetti told the New York Times. "We have too many adults struggling to be living off a poverty wage. This will re-establish some of the equilibrium we've had in the past."

But in many of these cities, congressional inaction didn't directly inspire a higher wage. After all, Los Angeles is in California, whose state minimum wage is $9 per hour — well above the federal minimum.

In part, it's also that a slow-to-act Congress adds to an atmosphere in which social mobility and Thomas Piketty, author of last year's best-selling, inequality-themed tome Capital in the Twenty-First Century, are topics of conversation, making the plight of the lowest-paid Americans increasingly visible. Protest groups like the Fight for $15, which advocates for higher wages for fast-food workers, have capitalized upon and advanced these conversations as well, helping establish in people's minds the idea of a minimum wage more than twice as high as the federal minimum.

Indeed, 60 percent of Americans favor a higher minimum wage, an AP poll found earlier this year. And that support appears to transcend political ideology — the four states that passed a higher minimum wage in the 2014 election (Alaska, Arkansas, Nebraska, South Dakota) all are conservative states.

The push for higher local minimum wages isn't just about political will. It's also about economics. Many of the cities that have passed or considered higher wages are, to put it simply, painfully expensive to live in. San Francisco, San Jose, Washington, Los Angeles and New York are all known for sky-high costs of living. A $15 wage makes more sense in Los Angeles than in a small, rural California farming town where rents and homes are far cheaper.

Not everyone is in favor of higher local wages. Every time a city passes a higher wage, businesses fight back, arguing that a higher wage floor will require them to cut workers or hours. Indeed, in Los Angeles, the Chamber of Commerce has argued that the hike will ultimately hurt workers, as NPR's Sam Sanders reports.

But there's a case for setting city-specific minimum wages nationwide. In a 2014 paper for the Hamilton Project, a part of the left-leaning think tank the Brookings Institution, MIT professor Arindrajit Dube agreed with this idea, arguing that "one size fits all" minimum wages hurt people in cities with higher costs of living.

His idea is to set local and state minimum wages at half the state or local median wage. That could cut the number of Americans in poverty by 2.2 million, he wrote. It's an argument city council members and mayors nationwide clearly have considered, and they certainly aren't going to wait for the federal government to act.