Accessibility links
5 Things You Should Know About Martin O'Malley : It's All Politics His announcement is quintessentially Baltimore with a venue well-known to area residents and the addition of a well-known local group, the Kelly Bell Band, booked as entertainment.

5 Things You Should Know About Martin O'Malley

5 Things You Should Know About Martin O'Malley 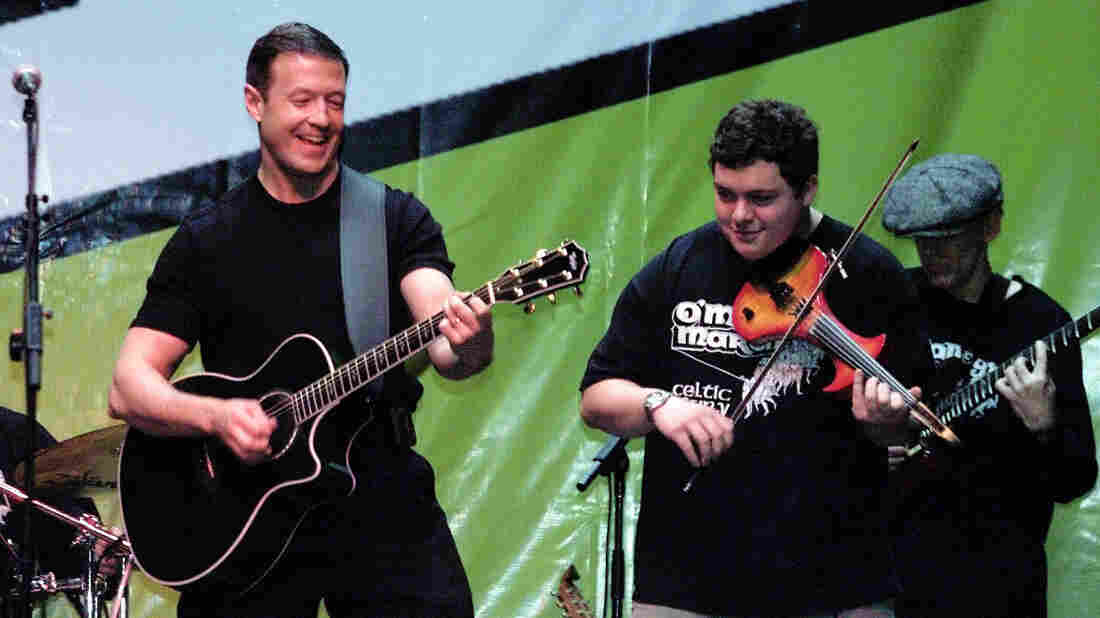 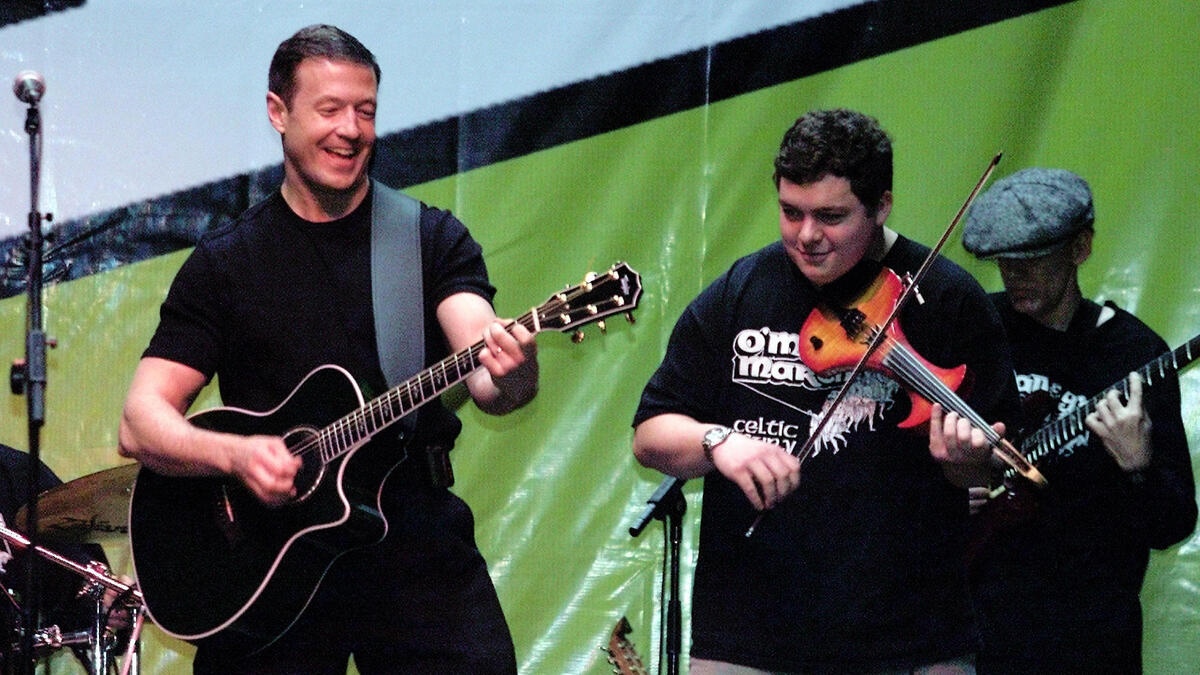 Martin O'Malley performs with his Irish rock group, O'Malley's March, in Baltimore in 2002.

Former Maryland Gov. Martin O'Malley announced his bid for the Democratic presidential nomination on Saturday, with a speech at Baltimore's Federal Hill Park. His announcement was quintessentially Baltimore with a venue well-known to area residents and the addition of the local Kelly Bell Band booked as entertainment.

But as O'Malley prepares to launch his bid, he'll do so as the city he once led as mayor is in the middle of its deadliest month in 15 years and the U.S. Justice Department has launched a civil rights investigation. Baltimore is still reeling from violence following the death of Freddie Gray, a black man who died after suffering a serious spine injury while in police custody. A grand jury has returned indictments against all six police officers charged in Gray's death.

While O'Malley currently holds no office in Maryland (his term as governor ended in January), the city of Baltimore has defined him and is an integral part of his political career. He served first on the City Council before his two terms as mayor launched him into the governor's mansion in Annapolis.

Recent events have cast scrutiny on his record as mayor, including the "zero tolerance" policing he introduced to the city and its lasting effects on the relationship between Baltimore residents and law enforcement officials. And O'Malley has said that the situation in Baltimore "has to be central" to his presidential campaign.

"I did not dedicate my life to making Baltimore a safer and more just place because it was easy," O'Malley said on NBC's Meet The Press in early May. "And I am more inclined and more deeply motivated now to address what's wrong with our country and what needs to be healed and what needs to be fixed."

Here are five things you need to know about O'Malley.

1. He cut his teeth in politics working for Gary Hart's presidential bid

Martin O'Malley was born into a family with political roots, but he got his own by working on Gary Hart's 1984 campaign against Vice President Walter Mondale for the Democratic nomination. Then a 20-year-old volunteer, he took a semester off from Catholic University to work for Hart's campaign in Iowa.

In a Facebook post last summer, O'Malley recalled his first trip to Iowa on Hart's behalf, noting that he "played the guitar at fundraisers ... but my main job was to mobilize supporters in Davenport ahead of the Caucus." While Hart didn't win the nomination over Mondale, O'Malley tapped into the network that surrounded Hart as he prepared his own run for the Democratic presidential nomination.

Another Hart claim to fame? He's said that he bought O'Malley his first "legal beer" on his 21st birthday.

2. He wasn't born in Baltimore

He's embraced the city — the good and the bad — but O'Malley actually grew up in the Maryland suburbs of Bethesda and Rockville with parents who had deep roots in Democratic politics. He attended Washington, D.C.'s Gonzaga High School, located in what was then a rough neighborhood not far from the U.S. Capitol, and went to college at Catholic University not far away. 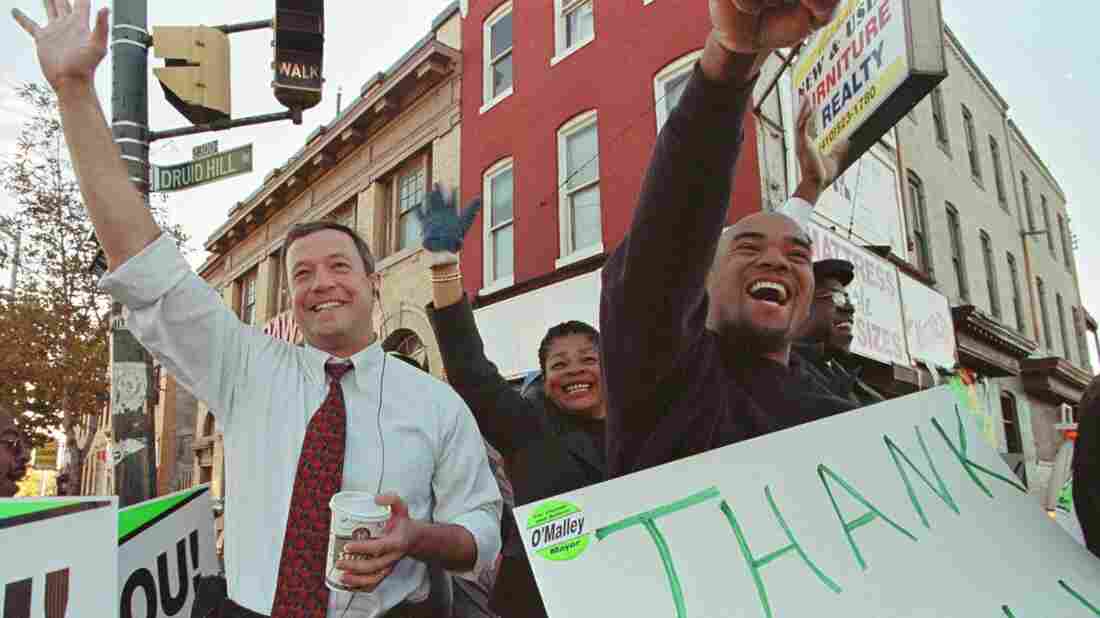 O'Malley thanks supporters after being elected mayor of Baltimore in 1999. Gail Burton/AP hide caption 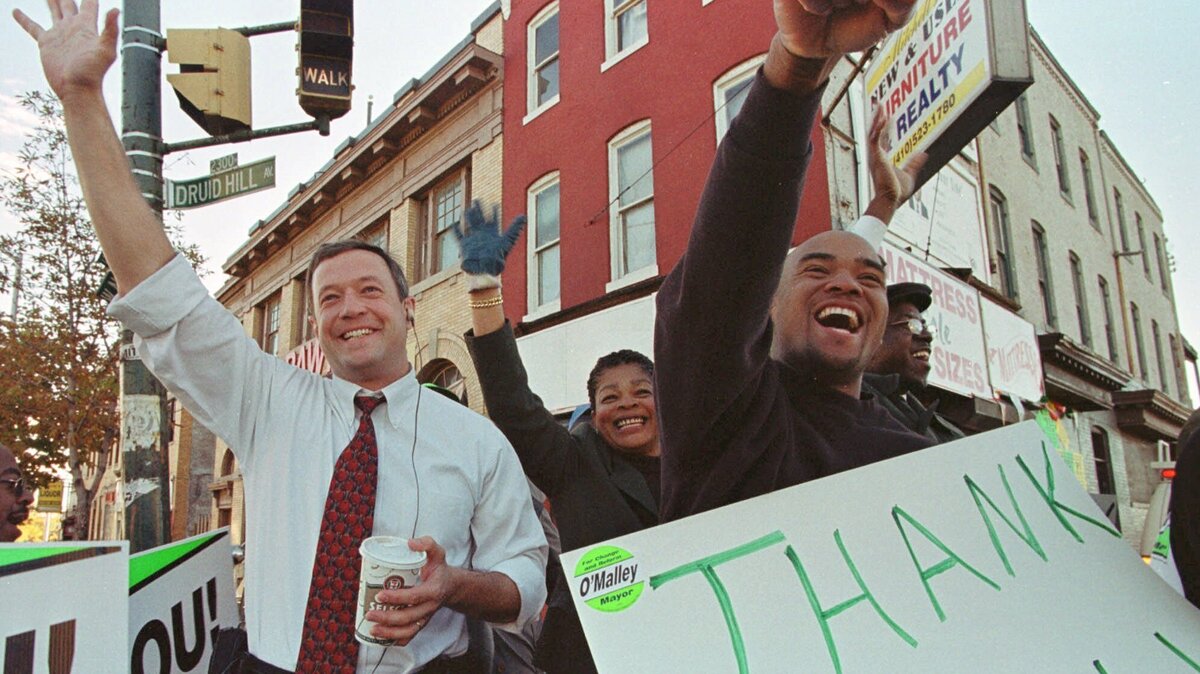 O'Malley thanks supporters after being elected mayor of Baltimore in 1999.

O'Malley then went on to attend the University of Maryland School of Law in Baltimore, remaining in the city working as an assistant state's attorney. In 1990, he married Katie Curran, the daughter of former state Attorney General J. Joseph Curran Jr.

Katie Curran O'Malley is a Baltimore City District Court judge. After leaving the governor's mansion in Annapolis, the family returned to Baltimore, purchasing a house in North Baltimore's Homeland neighborhood.

His campaign will also be headquartered in Baltimore, in the Railway Express building adjacent to Baltimore's Penn Station.

3. He lost his first race by fewer than 50 votes

In 1990, O'Malley ran a long-shot bid to unseat incumbent state Sen. John Pica in the Democratic primary. O'Malley's campaign lambasted Pica for missing more votes than any other member of the state Senate. But ultimately, he lost the race by 44 votes.

Pica, who now works out of an Annapolis office across the street from Maryland's capital building, recently told NPR that he believes the loss, with its razor-thin margin, was what made the state's Democrats begin to take O'Malley seriously. And he also said he thinks it was instrumental in the type of politician O'Malley is today.

After losing to Pica, O'Malley took a different path and was elected to Baltimore's City Council, where he served for eight years. He spent seven as Baltimore's mayor before moving to Annapolis, where he spent two terms as Maryland governor.

The state Senate race is the only race to date that O'Malley has lost.

4. He puts his faith in data

To put it gently, O'Malley's a bit of a nerd.

O'Malley likes to tout his statistics-based approach to governing, both in Baltimore City and in the governor's mansion. While serving as mayor, O'Malley launched a program called CitiStat to improve management and services across Baltimore. Modeled after the Compstat program used by the New York City Police Department, CitiStat focused on real-time tracking of a plethora of urban problems — from broken street lamps and potholes to how often city employees were skipping work.

When he took office as Maryland's governor in 2007, he implemented a similar program called StateStat to expand the effort across the state. There was even a BayStat focused on reducing pollution and reviving the Chesapeake Bay.

O'Malley, who has given speeches across the country and internationally on his data-driven approach to governing, recently detailed his efforts during a speech at the Washington-based Brookings Institution. During the appearance, O'Malley touted his successes in driving down major crimes in Baltimore faster than other large cities.

"We brought crime down by 43 percent. We reduced the number of children poisoned by lead in our city by 71 percent," he told the crowd.

While it's not likely to fire up activists in the key primary states O'Malley would need to win to secure the Democratic nomination, he has said he sees a role for data-driven governing at the federal level.

"There's not a doubt in my mind that this is the new way of governing and getting things done," he said

5. He's the frontman of a band

O'Malley is the frontman of the eponymously named Celtic rock band O'Malley's March. The band dates to 1988, though it's had a couple of lineup changes since it began. O'Malley plays the guitar and banjo as well as sings.

As he has ramped up travel to states that will be critical to his path to the nomination, he's been quick to pick up a guitar and strum a song or two for would-be early state voters.

No word yet on whether he'll be picking up a guitar or belting out a tune at Saturday's campaign launch. Though if the latest video his campaign released is any indication, we think there's a strong chance it happens.