Accessibility links
Returning To Roots, Clinton Lays Out Proposal To Expand Voting : It's All Politics On Thursday, Hillary Clinton called for universal, automatic voter registration. She had an early start on voting issues — at age 13, she went searching for voter fraud in Chicago and found it.

Returning To Roots, Clinton Lays Out Proposal To Expand Voting

Returning To Roots, Clinton Lays Out Proposal To Expand Voting 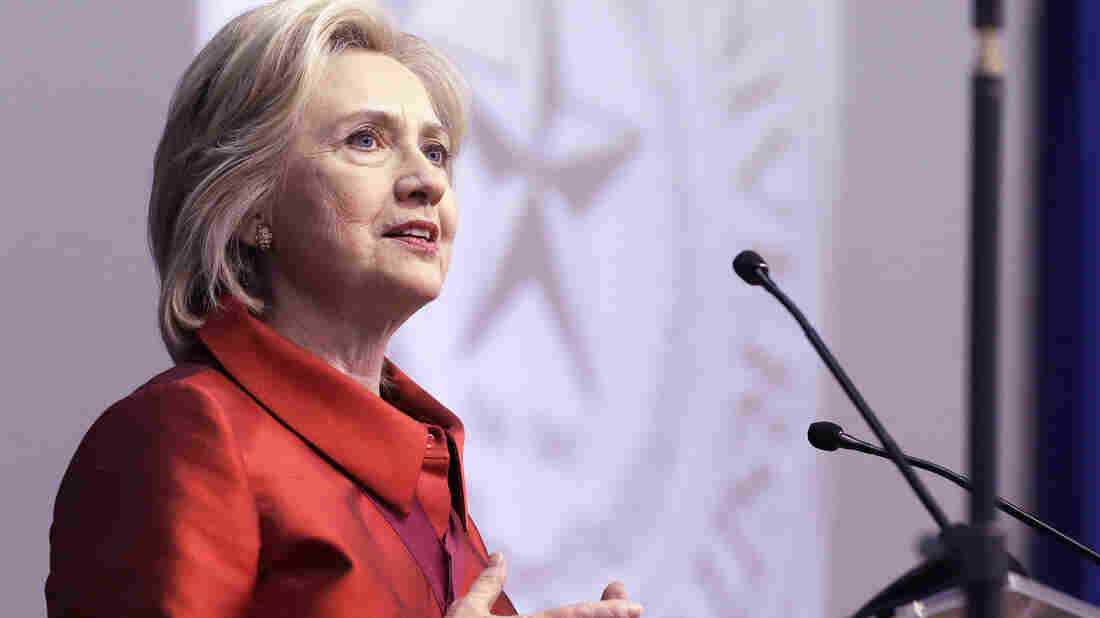 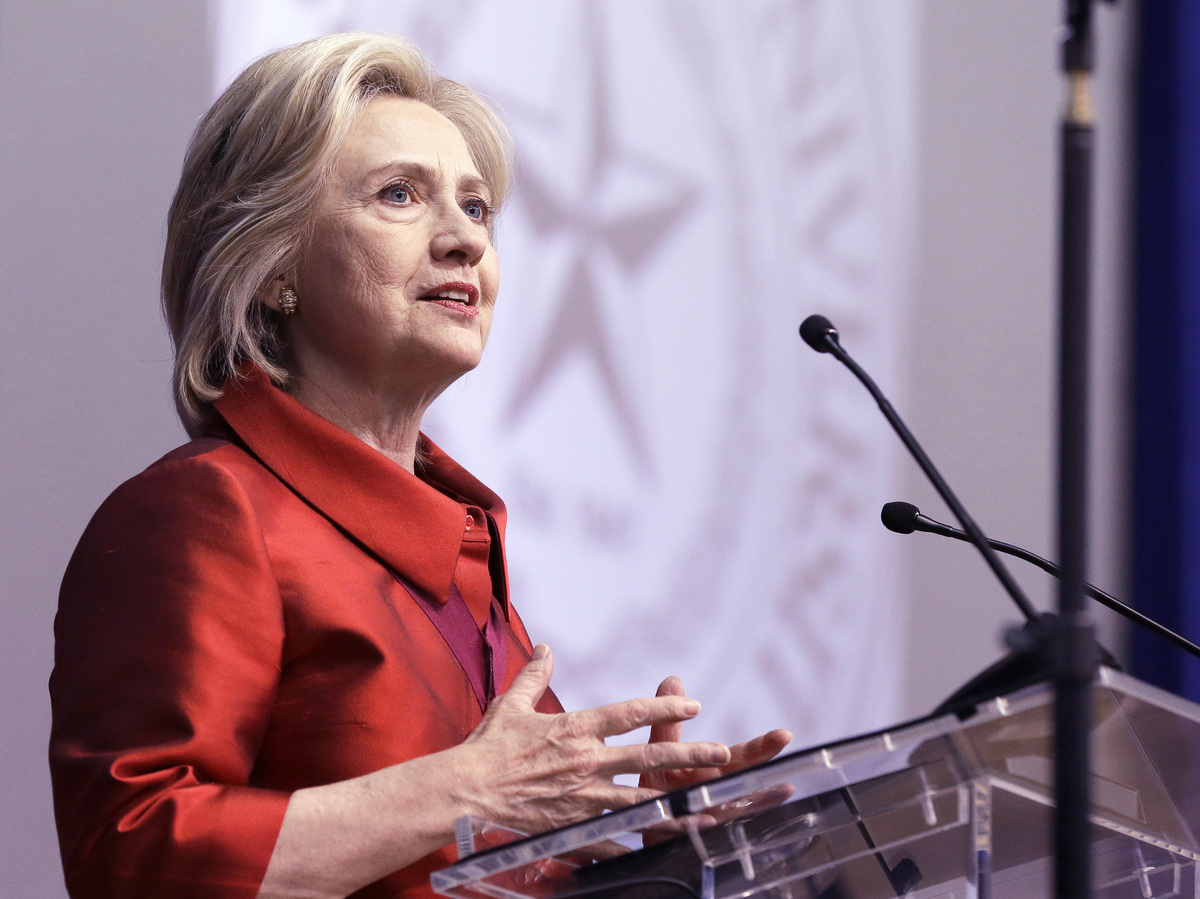 Hillary Clinton called for universal, automatic voter registration Thursday, saying "every young man or young woman should be automatically registered to vote when they turn 18" unless they choose to opt out.

She also called on all states to offer at least 20 days of early voting, to give as many people as possible a chance to cast ballots.

Speaking at Texas Southern University to receive a leadership award, Clinton blasted states, including Texas and Wisconsin that have reduced early voting in recent years.

"I call on Republicans at all levels of government with all manner of ambition to stop fear mongering about a phantom epidemic of election fraud and start explaining why they're so scared of letting citizens have their say," she said.

The Republican National Committee was quick to hit back, calling Clinton's language "misleading and divisive."

"Some people became Girl Scouts and we did politics."

"In reality, the vast majority of Americans — including minority voters — support commonsense measures to prevent voter fraud. Clinton's shameless attacks ignore the fact her Democrat-led home state of New York does not allow early voting while dozens of Republican-led states do. Her exploitation of this issue only underscores why voters find her dishonest and untrustworthy," Orlando Watson, RNC communications director for black media, said in a statement. 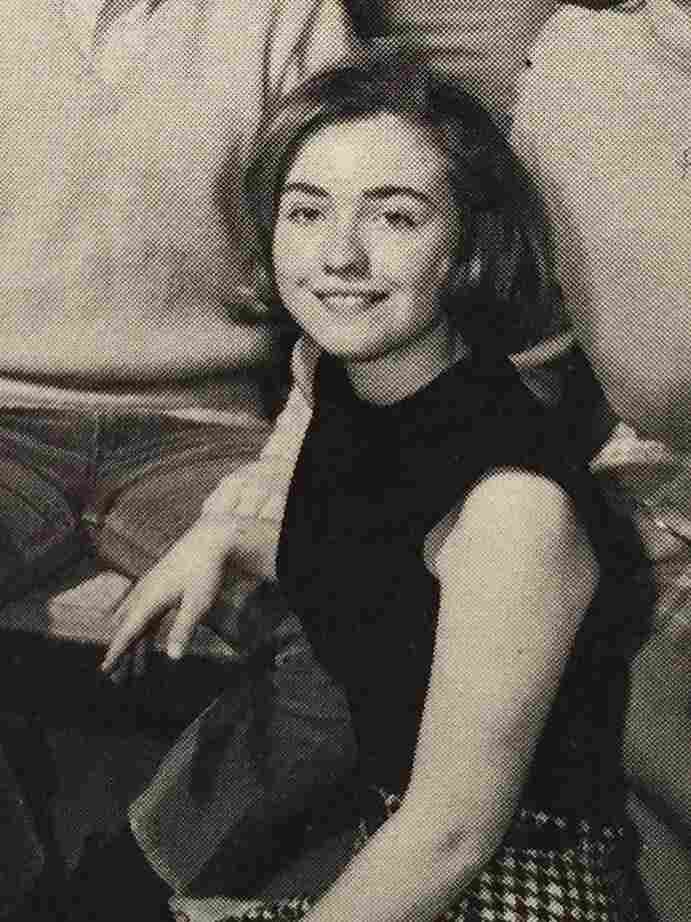 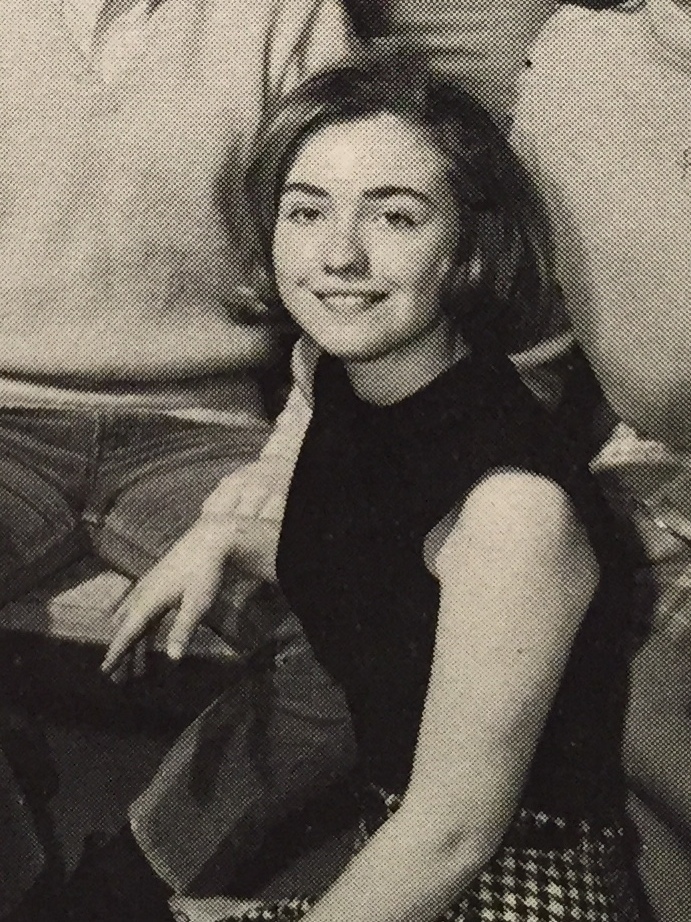 Hillary Clinton in a photo of student council leaders from her high school yearbook.

For Clinton, focusing on voting rights was something of a return to her roots. Her campaign points out that in 1972 she went to Texas to help register Latino voters.

But Clinton has been interested in voting rules since her earliest involvement in politics. Even at 13, she was incensed over what she saw as a distortion of democracy at the polls. And she was willing to do something about it, even then, flashing signs of the single-minded determination that even today inspires admiration in some and exasperation in others.

This was not an isolated opinion at the time. The best historical assessment is that there was voter fraud in Chicago in 1960, though it is impossible to say whether it affected the outcome of the presidential race in Illinois.

Clinton writes that the day after the election, her social studies teacher came to class "and showed us bruises he claimed he had gotten when he tried to question the activities of the Democratic machine's poll watchers at his voting precinct in Chicago on election day."

Rodham and her best friend Betsy Ebeling (Johnson at the time) were so outraged they called Mayor Daley's office during their lunch hour to complain. That weekend the two girls decided to volunteer with a group of Republicans who were checking voter lists against addresses, looking for voter fraud.

"Betsy and I decided to participate. We knew our parents would never give us permission, so we didn't ask," Clinton writes.

So, they took a bus from the sheltered suburb of Park Ridge, Ill., where they lived, to a hotel in downtown Chicago where the volunteers were gathering.

"We were each handed a stack of voter registration lists and assigned to different teams who, we were told, would drive us to our destinations, drop us off and pick us up a few hours later," Clinton writes.

Clinton writes that she went off, clipboard in hand, "fearless and stupid." 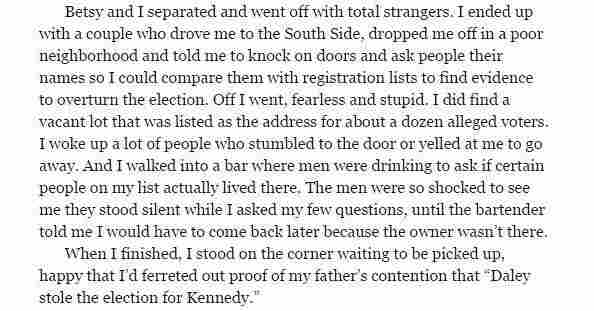 Even if Illinois was stolen for Kennedy, it wouldn't have been enough to win it for Nixon. Plus, Nixon had already conceded the race.

What was the takeaway for the girls? Don't go to the big city without telling your parents. And:

It "kind of made you think, 'Oh, there's more to this, more to elections than just writing on a ballot,' " said Ebeling in a recent interview.

Ebeling and Rodham went on to become "Goldwater Girls" wearing cowgirl hats and helping to set up Goldwater's office in Park Ridge.

"It just seemed to be part of what you did. Some people became Girl Scouts and we did politics," said Ebeling, reflecting on her early political activism with her friend Hillary Rodham.