Q&A: Ohio Gov. John Kasich. He Does It His Way

Q&A: Ohio Gov. John Kasich. He Does It His Way 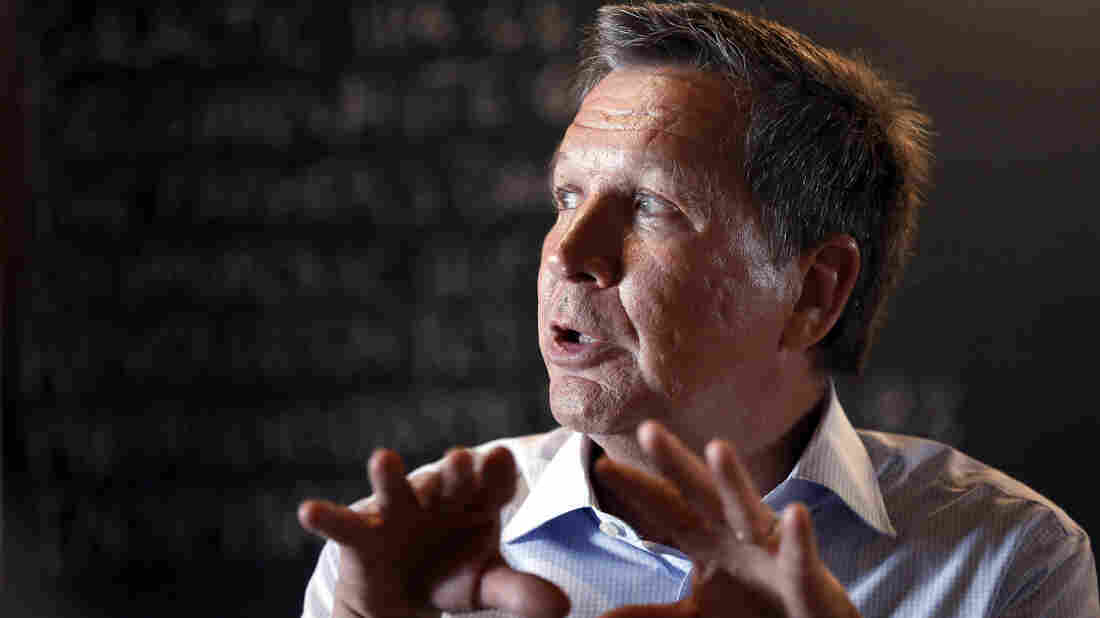 Republican Ohio Gov. John Kasich speaks to a crowd at a restaurant in New Hampshire in May. He's considering a run for president in 2016. Steven Senne/AP hide caption 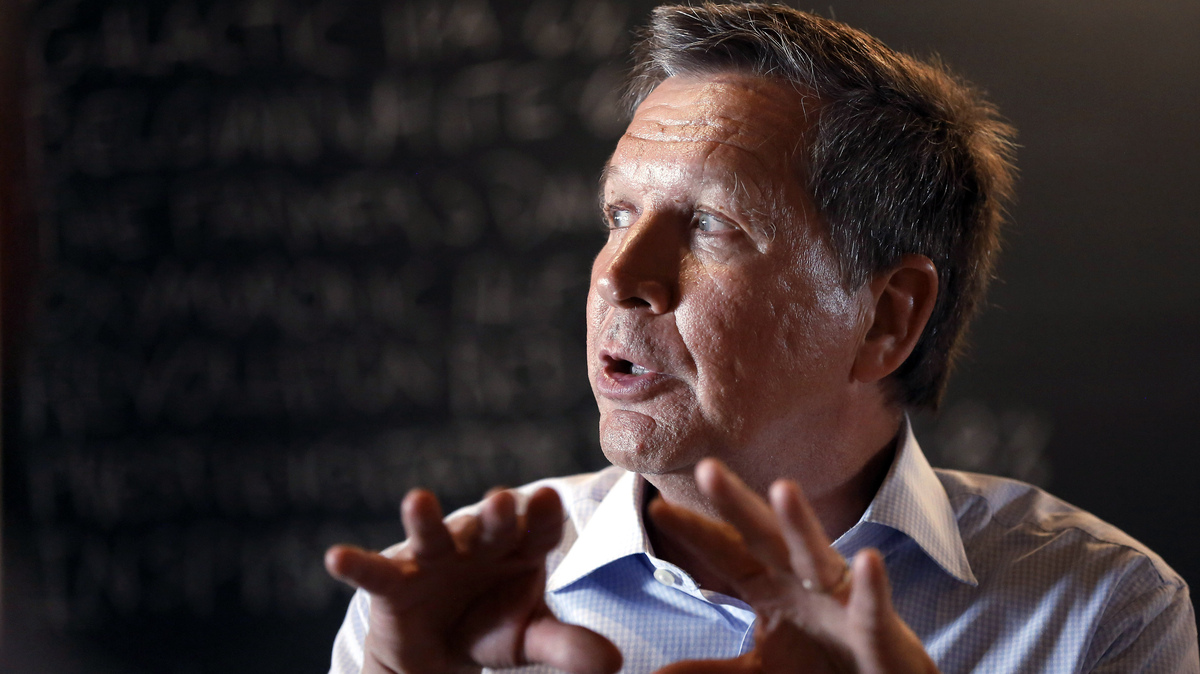 Republican Ohio Gov. John Kasich speaks to a crowd at a restaurant in New Hampshire in May. He's considering a run for president in 2016.

The latest name to make serious noise about a 2016 White House bid is the Republican governor of a state long been considered a key to GOP chances of winning the presidency — Ohio.

John Kasich, 63, a former congressman and one-time chairman of the House Budget Committee, has just begun his second term as governor. His first four years began in confrontational fashion. Like Wisconsin, where Gov. Scott Walker also took on public-employee unions, the move in Ohio prompted massive protests. Ohio's law went even further than Wisconsin's in that it did not exempt police and firefighter unions. Wisconsin's Walker won his showdown. Not so with Kasich.

The battle continued after he signed the bill into law, until it was ultimately overturned in a statewide ballot referendum. In the process, his approval ratings plummeted to just 28 percent.

Kasich likes his reputation as a fighter, but he put that loss behind him. Since then, he's worked to rebuild public support. As the Ohio (and national) economy has rebounded, he boasts of more than 300,000 new jobs. He's also cut taxes.

And he's shown he'll take on members of his own party. Most GOP governors refused to expand state Medicaid programs under the Affordable Care Act — and the (billions of) federal dollars that pay for it. But Kasich said yes. He's also earned the ire of conservative critics by supporting Common Core education standards and a path to legal status for millions of immigrants in the U.S. illegally.

Kasich insists he's a true conservative, but says he's more interested in solving problems than in ideology. Now, he's making visits to New Hampshire, and other early key 2016 presidential nominating states. He sat down with NPR prior to an event in Portsmouth, N.H.

Here are some excerpts from that conversation.

On how soon he might enter the race.
We are a very disciplined organization, and if we want to make sure that if I were to go forward that we can win. And I'm very optimistic about what we're seeing. I'm not going to give you any deadlines. We've not even imposed any self deadlines. But we are aware the clock is ticking.

What does it say to voters that he's from the big battleground state of Ohio? No Republican has won the White House without winning Ohio on Election Day.
Look, nobody's going to win the presidency without winning Ohio, but Ohio's not the only place, and this whole primary process is not contingent on how he's going to do in Ohio. Maybe that's what some people will think, but it's how to connect and talk to people in these other states that matters to me.

On his battles with unions, losing on that issue in a statewide referendum and the big hit to his approval rating in polls at the time.

I was never daunted with that. You win some you lose some. But when we finish here, Ohio is very strong and very diversified. We're up 350,000 jobs. We have the largest amount of tax cuts in the country with a lot more coming. In politics, if you're going to sit around every day and take a poll you might as well hire a bunch of astrologers to come in and advise you.

That one I lost big. That's the end of it. So what? You move to the next thing. Seven days a week. Monday doesn't go well, you make Tuesday go well.

Did that loss cause him to change his approach and reach across the aisle more?
I think we were reaching out from the beginning, but you know it was a tough time when you're $8 billion in the hole. Look this was one issue, one time. My approach throughout my entire career has been to negotiate and reach agreement with people. [In Congress,] I was involved with welfare reform. I involved with grounding the B2 with Ron Dellums [former Democratic congressman from California], one of the most liberal members of Congress. I negotiated with the Clinton administration to get the budget balanced.

On other GOP governors saying no to the Medicaid expansion.
Well, everybody has to do what they want to do. But for me, because we brought Ohio money back, we now have an ability to treat the mentally ill, many of whom are in our prisons and our jails. We have the ability to treat the drug addicted and get all those folks up on their feet give them a chance at a better tomorrow. And we've also been in a position to be able to help the working poor. And I'm a believer that everybody in a society ought to be included. Now, if there's some people who don't agree with that it's up to them.

But does that position make it harder to run in GOP primaries?
What did we do wrong? We did things right. See, I think Washington pundits have a very skewed view of what the people really think. And I think there's great opportunity for somebody who has a message of hope, of opportunity and also experience and results. I mean, my state is growing, the country did better after we balanced the budget, the military did better. That's what matters to people. Not that if you can walk this narrow line we'll be for you.