Accessibility links
Under Perry, Texas Added Jobs At Nearly Four Times The National Rate : It's All Politics Here's how well (or poorly) the governors in the presidential race fared on job creation. 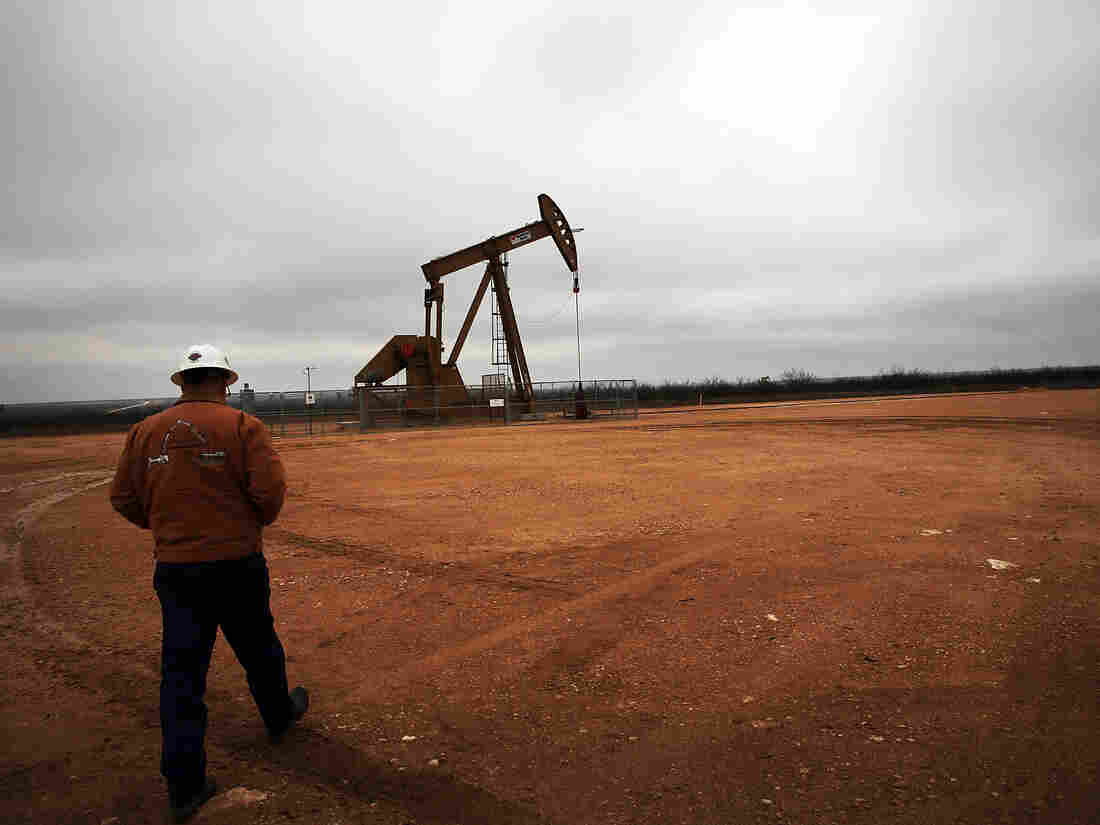 An oil well owned an operated by Apache Corporation in the Permian Basin are viewed on February 5, 2015 in Garden City, Texas. Spencer Platt/Getty Images hide caption 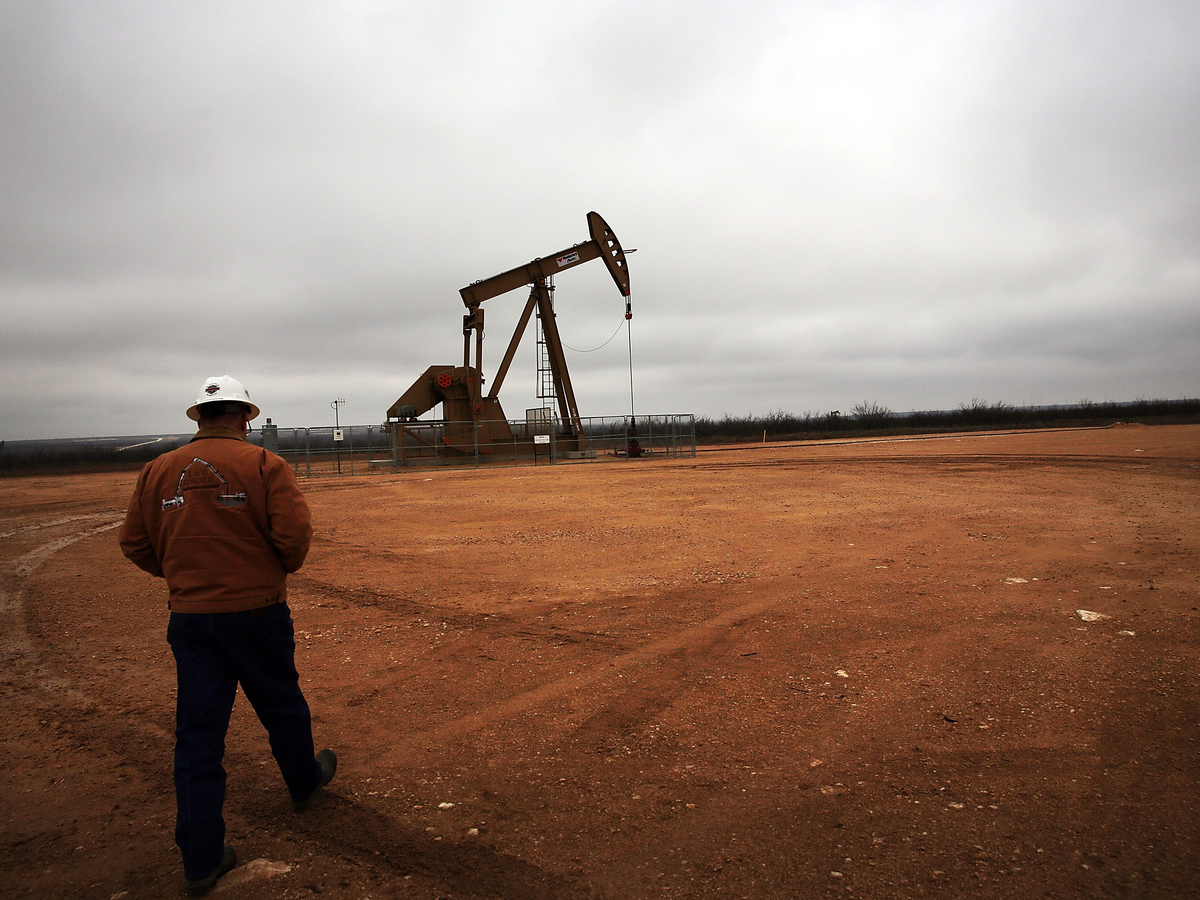 An oil well owned an operated by Apache Corporation in the Permian Basin are viewed on February 5, 2015 in Garden City, Texas.

On Friday, the Labor Department announced that the economy added 280,000 jobs in May — a strong figure, and a much faster rate than economists expected.

Now imagine that in your state, job creation was nearly four times that fast.

That's what GOP presidential hopeful Rick Perry can claim for Texas during his tenure as governor. Among all of the governors running for president, he can boast the best job creation numbers.

That's what NPR's analysis of state employment data from the St. Louis Federal Reserve finds (I did the same kind of analysis earlier this year, at Vox). Retooling the numbers today (and adding in the candidates who weren't around back in January), it's clear that only three candidates can claim job growth faster than the national rate, and that Perry still by far leads the pack.

First, let's look at the basics: Perry's Texas added more than 2.2 million jobs during his 14 years in office — that means that during his time in office, Texas jobs grew by more than 23 percent. By comparison, U.S. employment grew by just over 6 percent. So job growth in Perry's Texas was around 3.8 times as fast as the US as a whole.

If that doesn't astound you, consider a line from Perry's speech on Thursday, announcing his run for president:

"During my 14 years as governor, Texas companies created almost one-third of all new American jobs," he said in his speech (to be more exact, the figure is nearly 28 percent).

That puts a few governors well ahead of the rest of the pack: though Jeb Bush and Bobby Jindal both outstripped the national rate respectably, Perry comes out with job creation nearly four times the national rate.

But then there's the question of whether that job growth is those governors' doing. And the answer is that it's really hard to draw a direct line between governors and the job growth in their states.

Economist Jared Bernstein has written that in recessions, the president and Congress are the most important engines of job creation (think the recovery package passed in the wake of the financial crisis). In expansions, it's more complicated, but he believes that governors and mayors don't create jobs; they attract them:

"Do governors and mayors have more to do with job creation when the economy is growing? Not so much here either, but that doesn't mean these electeds are irrelevant to job growth," he writes. "While the aggregate quantity of job growth in a nation is largely driven by macro and global trends, there's a lot sub-national officials can do to try to encourage the jobs that are created to locate in their states and cities. They affect less the number of jobs than where those jobs end up."

So if you hear governors on the campaign trail say they "created" jobs, that's not quite the case.

And it's true that improving infrastructure and lowering taxes, for example, can help attract businesses into a state. As Bernstein writes, creating research hubs centered around universities can also attract businesses.

But those effects can easily be overshadowed by bigger forces that can affect job creation.

Texas, for example, has a massive oil industry that can drive job creation independently of whoever is in charge. Indeed, now that oil prices are down and the industry is hurting, Texas' unemployment claims have also started to climb. Not only that, but the state has enjoyed fantastically fast population growth (which could function both as a cause and effect of new jobs): the state population grew by nearly 29 percent between 2000 and 2014, compared to just 13 percent in the US as a whole.

Consider also that Texas had fast growth when Perry was in office, but it also did before he was in office. According to a 2011 analysis from Harvard economist Ed Glaeser, Perry's policies were responsible for only 0.1 percent of the state's job growth at the time, once Glaeser controlled for how quickly Texas had been adding jobs without him.

Moreover, national trends can override positive local developments — Huckabee and Bush, for example, both left office just before the financial crisis hit, tanking the national economy. Had they remained in office just a year longer, their numbers could have been much worse, meaning fewer statistics to tout on the campaign trail.