Accessibility links
Jeb Bush Faces His Own Foreign Policy Test With Europe Trip : It's All Politics The likely 2016 presidential candidate hopes to avoid the mistakes that have haunted his rivals while separating himself from his brother. 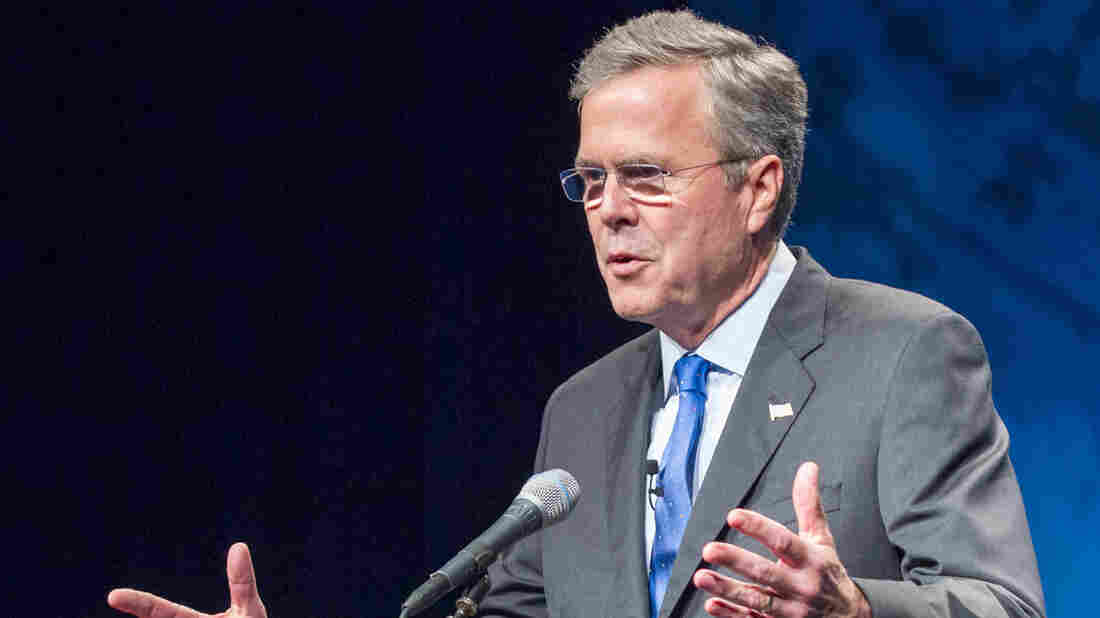 Former Florida Gov. Jeb Bush, who is expected to announce his GOP presidential campaign on June 15, embarks on a five-day trip to Germany, Poland and Estonia on Tuesday. Erik Schelzig/Associated Press hide caption 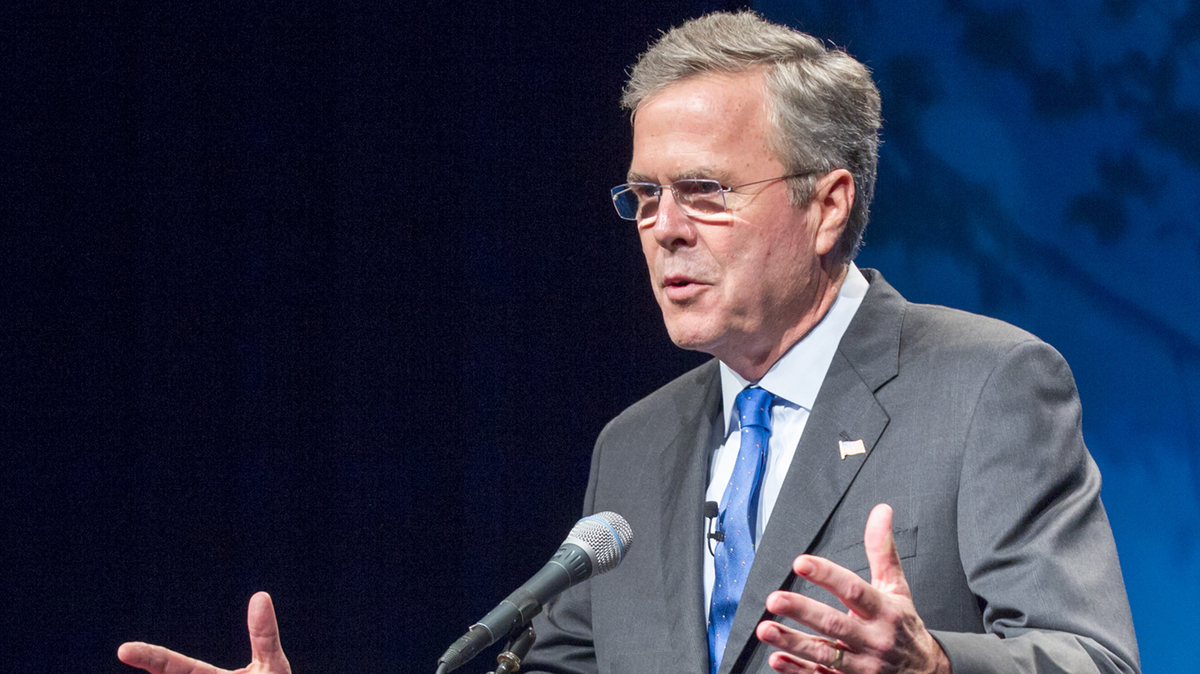 Former Florida Gov. Jeb Bush, who is expected to announce his GOP presidential campaign on June 15, embarks on a five-day trip to Germany, Poland and Estonia on Tuesday.

Former Florida Gov. Jeb Bush begins a six-day trip to Europe on Tuesday, hoping to avoid the mistakes that have haunted his likely GOP presidential rivals.

The sojourn abroad is a time-tested ritual for those who want to inhabit the Oval Office. For governors, especially, it's a way to burnish their national-security credentials on an international stage. Senators have more frequent delegation trips abroad and congressional hearings that help bolster their foreign-policy resumes.

And in a GOP primary that looks to be heavily influenced by foreign policy — with Republicans searching for a counterweight to the experience of former Secretary of State Hillary Clinton, the favorite to be the Democratic nominee — the question of national security has taken on added importance.

"It's all about domestic politics; it's not about foreign policy. It's about, particularly, governors showing that they can go abroad, have interesting conversations and not stumble when it comes to foreign policy issues," said Gary J. Schmitt, a former Reagan administration official who now directs the American Enterprise Institute's Program on American Citizenship. "It's a way of reminding folks that even though they're governors, they're capable of handling foreign affairs as well."

For others, though, that tactic hasn't gone so well. Questioned after a London speech about his views on evolution, Wisconsin Gov. Scott Walker said he would "punt" instead of answer. He also punted questions about foreign policy. New Jersey Gov. Chris Christie, traveling amid heightened worries about a measles outbreak, said, "Parents need to have some measure of choice" as to whether to vaccinate their children.

Mitt Romney, the 2012 GOP presidential nominee, tried to use a summer trip to Europe and Israel to boost him against President Obama during the last election, but the result was a string of negative headlines instead.

Bush, the former Florida governor, has an added weight during his own stops in Germany, Poland and Estonia — the burden of his last name in a region none too fond of his brother's foreign policy. 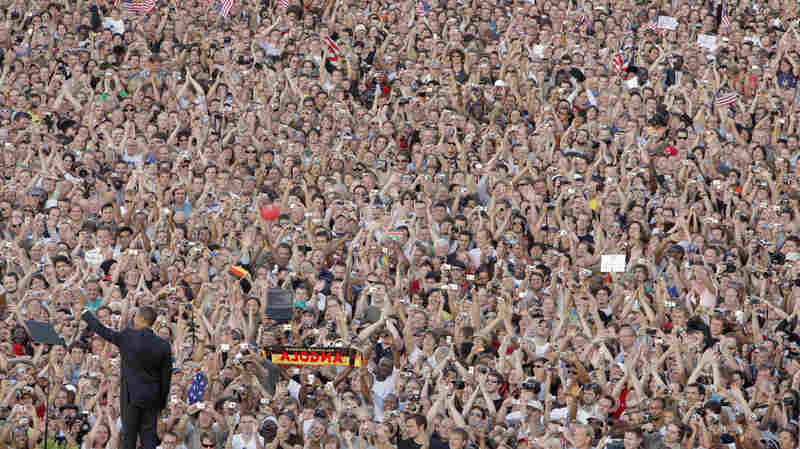 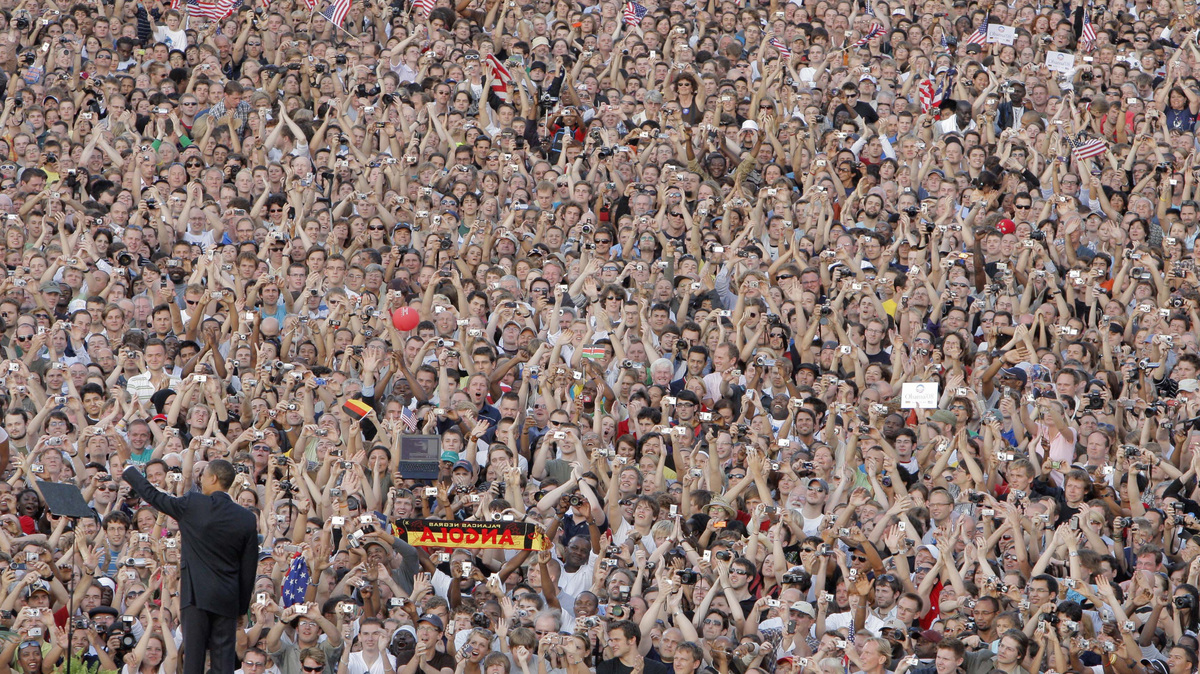 In 2008, then-Democratic presidential candidate Sen. Barack Obama, D-Ill., waves as he arrives at the Victory Column in Berlin.

Blowback to the President George W. Bush administration's missteps in Iraq was one reason then-Illinois Sen. Barack Obama drew tens of thousands of adoring onlookers to his own speech in Berlin in 2008. Now, each Republican wants to emulate that same political success.

But Republicans now point out that this time, it's Obama whose standing on the world stage has suffered. He's also been in Germany this week for the G-7 Summit, as the major world powers try to grapple with Russian aggression toward Ukraine, threatening more possible sanctions. The growing threat of the Islamic State of Iraq and Syria was also a major topic at the gathering, with the president saying his advisers "don't yet have a complete strategy" to train Iraqis trying to fight off the terrorist group insurgents.

"There's parts of Europe that are frustrated with Obama," Schmitt said. "So even though [Jeb's] brother's shadow might be hanging over him, it's also the case that Obama isn't thought of as having provided the sort of leadership that's usually come from the U.S. as well. There's a way for [Bush] to split the difference between Obama's perceived lack of interest in European security and his brother's Iraq aggression and to look at least competent when it comes to these affairs."

According to excerpts provided to Bloomberg from Bush's speech Tuesday to the conference of Germany's Christian Democratic Party, he plans to make Russian Prime Minister Vladimir Putin a focus.

"Russia must respect the sovereignty of all of its neighbors," Bush will say. "And who can doubt that Russia will do what it pleases if its aggression goes unanswered? Our alliance, our solidarity and our actions are essential if we want to preserve the fundamental principles of our international order."

For Bush, the timing of the trip takes on added risk. Any misstep could hamper his official campaign kickoff on Monday, the day after he returns. And the press will be especially scrutinizing anything he says on his brother's 2003 invasion of Iraq after the younger Bush fumbled questions on it last month.

The topic of his family is something Bush has had to address repeatedly at campaign events already — even before he was officially in the race.

"Just for the record, one more time: I love my brother, I love my dad," the likely White House hopeful said during a Chicago foreign-policy speech earlier this year. "And I admire their service to the nation and the difficult decisions that they had to make. But I'm my own man, and my views are shaped by my own thinking and my own experiences."

Florida-based GOP consultant Rick Wilson said Bush needs to make the focus on hitting President Obama at a time when many, especially conservatives, believe his withdrawal of troops in the region led to the rise of ISIS in the region.

"Jeb is a very sophisticated guy, a very smart guy," Wilson said. "I doubt he's going to have any problem. It's a matter of reframing it and being a prospective leader and not just playing the D.C. conventional wisdom game of 'It was Dubya's fault.' "