Accessibility links
Is Hillary Clinton A Real New Yorker? : It's All Politics When Hillary Clinton moved to New York to run for Senate, New Yorkers were suspicious that she was one of them. Now that she's running for president, the city's residents call her one of their own. 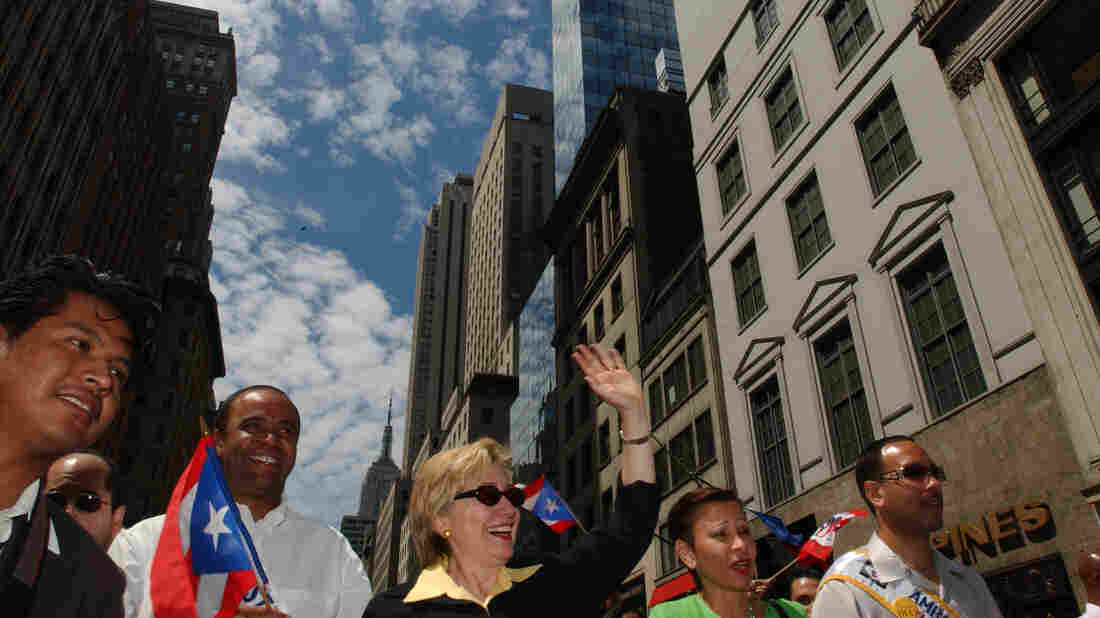 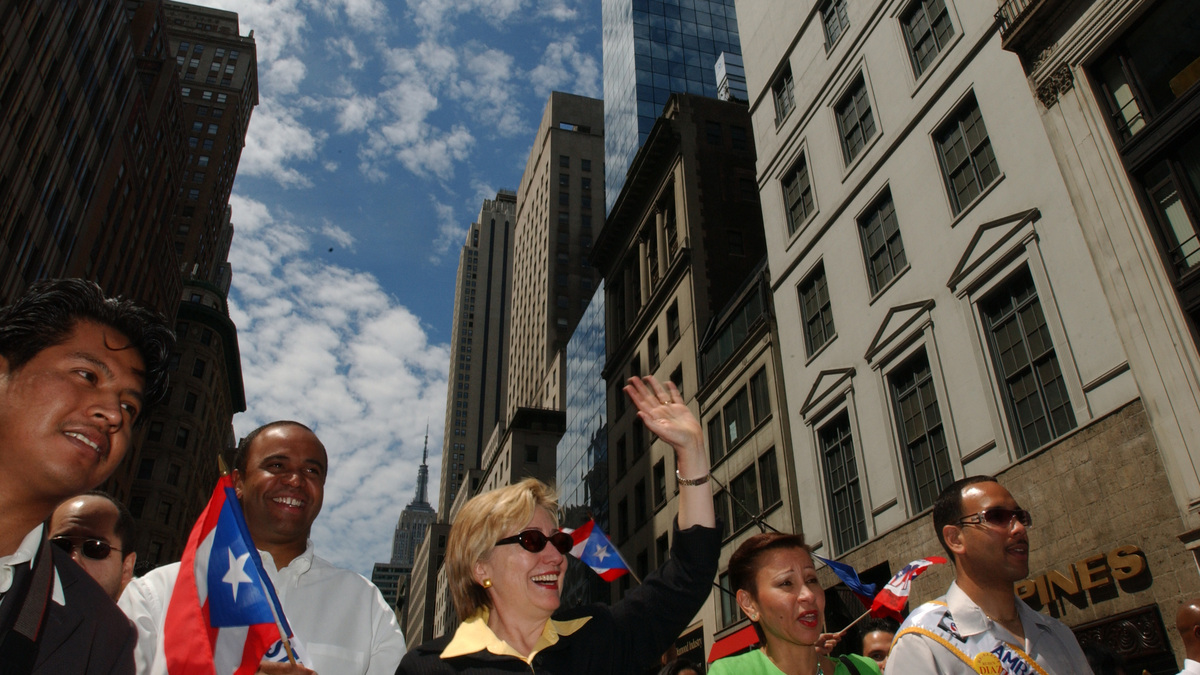 Hillary Clinton, then senator, waves to the crowd during the Puerto Rican Day Parade in New York City in 2004.

This story was produced by member station WNYC.

At the southern tip of Roosevelt Island, you're almost at the geographical center of New York City.

The United Nations, the midtown skyline, Brooklyn and Queens can all be seen. But the bulk of the island consists of strangely well-ordered, mid-rise, mid-century buildings. It's a place that doesn't feel much like New York at all — a perfect setting for Hillary Clinton to kick off her campaign for president. New York, but not.

The island's namesake, Franklin Delano Roosevelt, had a similar pedigree. Yes, he was born here, raised in Hyde Park, and elected governor of New York. But, like Hillary Clinton, he was welcomed by the elite, had a president in the family and a voice that could be accepted anywhere in the country.

"When he says, 'The only thing we have to feah is feah itself,' it doesn't sound like somebody from the streets of New York," said Geoffrey Ward, Roosevelt's biographer.

"I don't think people thought of Roosevelt largely as a New Yorker," Ward said in an interview. "They thought of him quite early as a national figure."

That's kind of the way they thought of Bobby Kennedy Jr., the former U.S. attorney general, brother of a president, raised in Massachusetts.

"I shall devote all of my efforts and all of my talents to the state of New York. This I pledge, Kennedy said in his distinctive Boston accent, announcing his candidacy for the U.S. Senate at Gracie Mansion in New York. Reporters peppered him with questions about adopting a state from which to run. He was defensive. New Yaw-awk, is how he pronounced the name of the state.

But 36 years later, when Hillary Clinton first came to New York to run, longtime political reporter Gabe Pressman of WNBC-TV asked her if she didn't have a lot of chutzpah to be running for the U.S. Senate from New York. She said no — but New Yorkers were pretty clear.

"Hillary? Where did she come from? Washington, where they made a mess," was one comment from back in 2000. The only thing missing from that sentence was, fughedaboutit!

But she won, handily, twice. Then she ran for president and served as secretary of state. Ironically, as New York became less important to her, she became more important to New Yorkers.

In Long Island City in Queens earlier this week, a surprisingly diverse swath of New Yorkers stretched for attributes they could assign to Clinton as one of their own.

She's a strong woman, and New Yorkers are strong. That was from Laura Gonzaga, an office worker.

And from hospital orderly Joshua Yanapa: She's ambitious. She works hard. "That's what New York is built upon," Yanapa said. "Hard work, hard labor, a lot of time being put in."

Sitting in Court Square on his lunch break, Jose Marcano, who works in construction, mused, "She has good attitude; she makes a decision; she thinks things out beforehand."

But wasn't she a little bit from Washington, or Little Rock, Ark.? "Naw," Marcano said. "She's a New Yorker now."

But is it the case elsewhere in the country that people think she's a New Yorker? In the important early state of Iowa, Iowa Public Radio reporter Sarah Boden sampled opinions at the Smokey Row diner in Des Moines.

"Ted Cruz is from Texas. Martin O'Malley is from Maryland. How about Hillary Clinton?" she asked dozens of locals.

Clinton was actually born in Chicago, raised in the in the suburbs, attended Wellesley and Yale, moved to Little Rock, then Washington, then Chappaqua, N.Y., where she's maintained a residence for 16 years.

In fact, the very idea of place as an indicator of identity is a construction of its own, said Karen Morin, a Bucknell Univeristy geographer. "It's a choice. It's an invention of yourself."

Politicians are particularly good at this. George W. Bush, of Texas, grew up in Connecticut. Politicians pick places like they might pantsuits, or cowboy hats.

Which brings us back to Roosevelt Island.

"It's probably a good decision for her to speak from that location," Morin said, "as opposed to something that's a little more alien to the rest of Americans, [like] some place associated with New York City."

The proper dose of New York to forge just the right image. And no more.